. I can count on one hand the number of delivery meals I’ve had in the past year or so.

Anyway the shelter in place order has changed this recently. I live in San Francisco but I am not within walking distance to many restaurants (and I also don’t like to drive very much) so have been getting delivery rather than takeout. Here are some of the delivery meals I’ve consumed in the last couple of weeks:

Mamahuhu:
Chef Brandon Jew’s “Chinese American” restaurant, where he serves such classics as kung pao chicken and beef and broccoli. I got a mapo tofu from here, which has shiitake mushrooms and is vegetarian, which was pretty good and legit, and a jade fried rice, which is not vegetarian and was fine. The fried rice was a little clumpy but this is probably a factor of the delivery. This order was enough for two meals. As a solo diner I probably should have gotten one of their combo plates, which includes a main, rice, and vegetables. 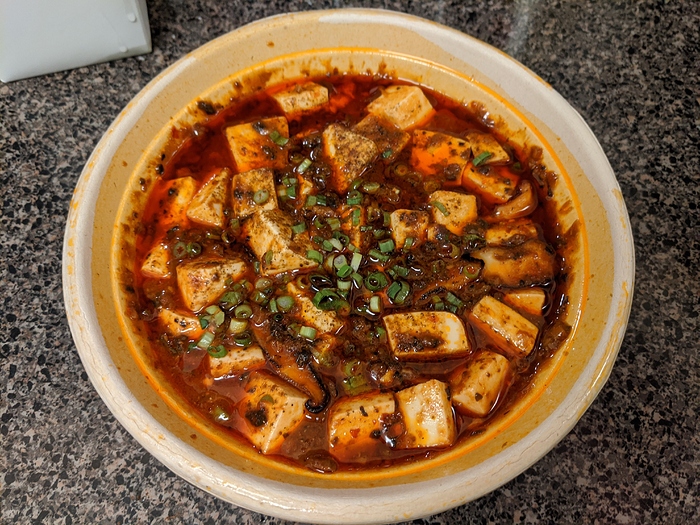 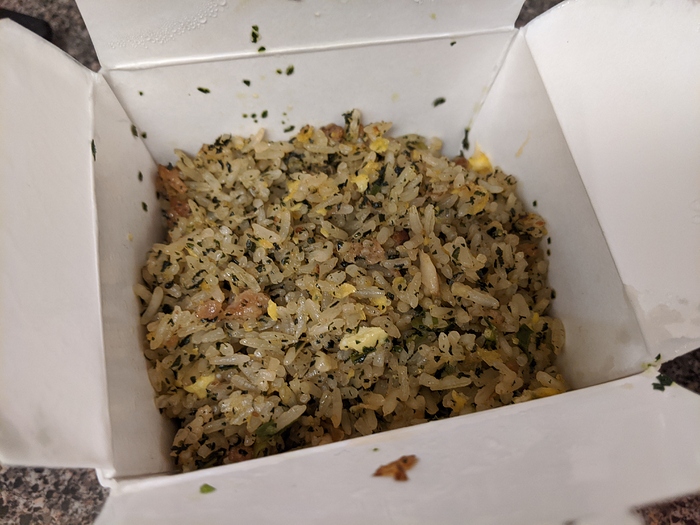 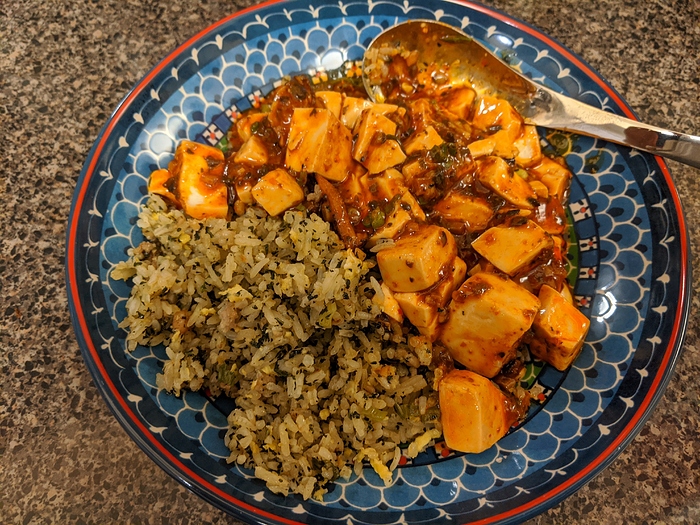 Blue Fin Sushi and Lounge:
Was in the mood for sushi one day. Had some sushi and sashimi, two things that are not easily made at home (at least for me). Pretty good. Not too expensive. 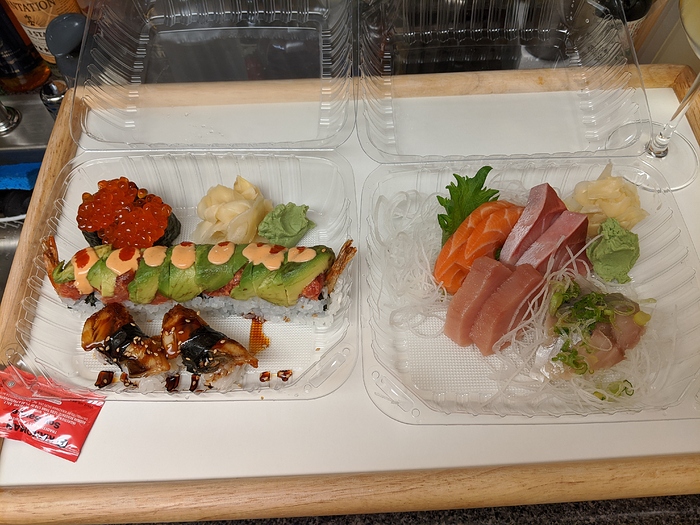 Farmhouse Thai:
Forgot to take pictures of this but had their pad kee mao (drunken noodles) with roast pork. Large portion, good noodles, tasty. The pork was plentiful but a little on the dry side and the skin wasn’t crispy. I think roast pork suffers from the delivery trip.

Lers Ros:
Got their dry tom yum noodles (lek tom yum haeng), which has thin rice noodles, roast pork, fish cake, ground pork, bean sprouts, and more. A good bowl of noodles and quite large - I could have maybe split this into two meals but I ate the whole thing

. Like the pad kee mao from Farmhouse, the roast pork suffered from the trip but was fine. Kind of wish there was a little soup on the side. Fish cakes were a little mealy and lacked bounce. Still, a good bowl of noodles that scratched a dry noodle itch. I also got an order of their fried bananas with honey which got a bit soggy I think due to the delivery trip. Ended up putting half of those in a protein shake for another meal. 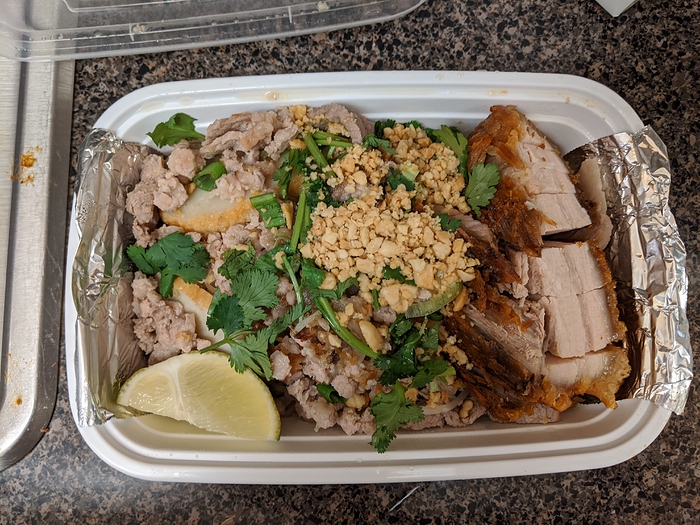 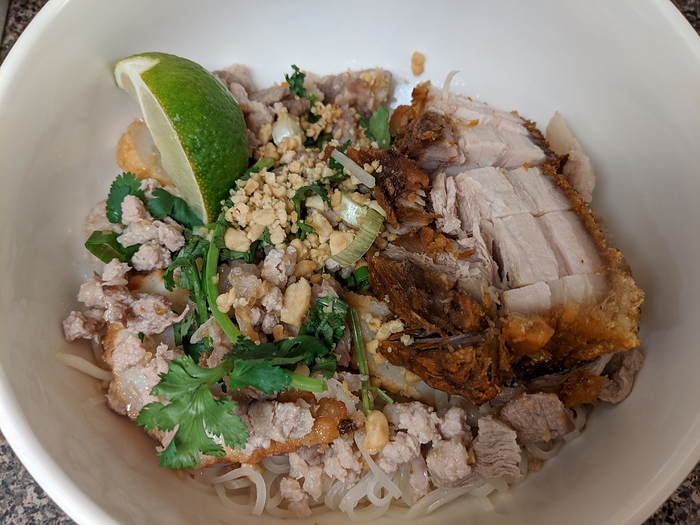 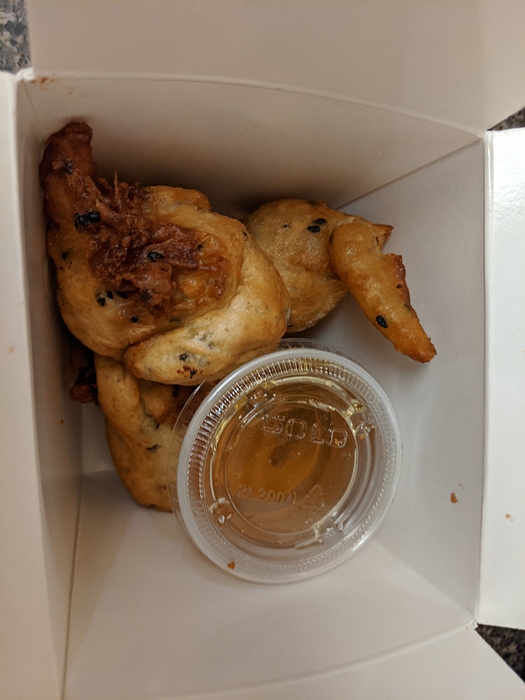 Anyone else been getting takeout/delivery from local restaurants? 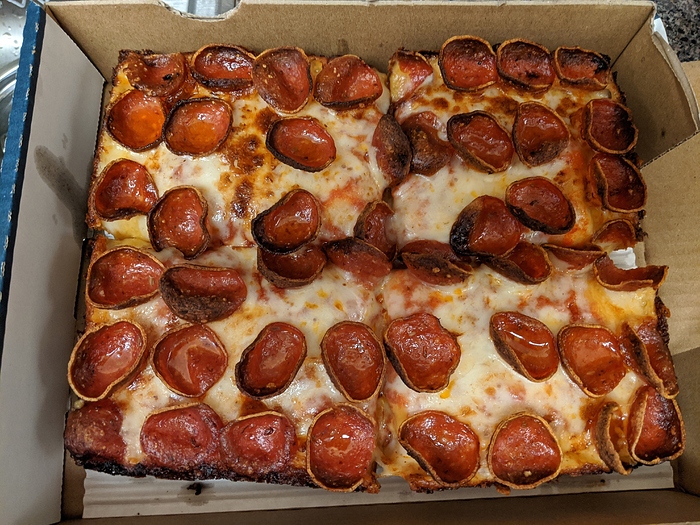 Here are some photos of lunchtime on a recent midweek in Oakland Chinatown. Almost all the establishments shown have takeout/delivery. The photos were taken with a pinhole lens which only lets in a small amount of light and is fixed-focus meaning that focus cannot be adjusted either manually or automatically but it gives the look that I wanted. The pinhole lens was fitted onto a Sony NEX F3 digital camera with an APS-C sensor but the resolution was dialed way down to only about 3 megapixels.

I’ve / we’ve eaten hundreds of pies in metro Detroit across the decades, and never had one presented to us with that quantity of Pepperoni. Almost seems like Square Pie Guy is boasting.

Yeah they were quite generous with the pepperoni. I hope to try Detroit style pizza at the source one day

Went to Buddy’s. Loved the atmosphere. So different from the bay area… cops eating with, er, non-cops. Racially mixed, in a way that Oakland was more like 30 years ago.

Pizza was pretty good. Cheese was perhaps average, tomatoes and crust were excellent.

Would eat there again, would even consider going to Detroit again for pizza ( worth a trip is three stars, right? ) but you might have gotten something just as good.

I hope St Louis style pizza becomes a thing around here. It’s basically a bar snack that’s more like pizza on a flour tortilla, and it goes great with a couple of beers - what it was designed for, cut into smal slices to everyone can have one or two and not spoil dinner.

Buddy’s sounds like a cool place. I’ve read that that’s where the style originated.

Re: St. Louis style - Tony’s Pizza Napoletana in North Beach had it on their menu, with Provel cheese and all. Haven’t tried it myself.