I come across this place that sells mitten crabs, mantis shrimp and other imported seafood. I’ve not bought, but will probably give it a try at some point. Wanted to see if anyone has experience with it or similar services.

Cooked/ frozen mantis shrimp in 10lb box. Each box has 10 bags. Not sure price. But these and other seafood seems to come in pretty large sizes. Probably need to split with others. 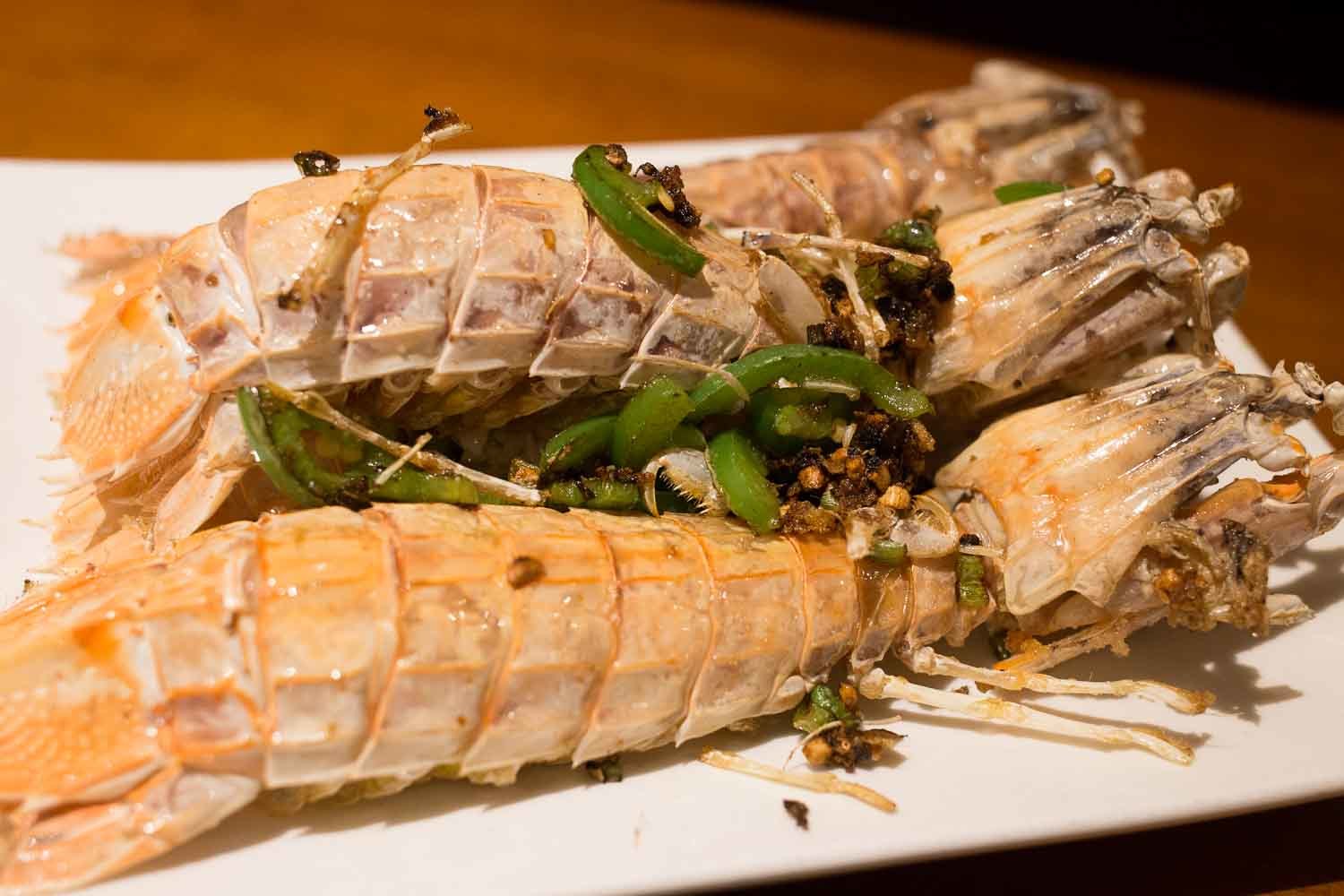 @night07 i wonder if Cafe Broadway got theirs from this place.

Woah I didn’t even think the US allowed imported mitten crabs. I don’t know if they got it from this place. I’m just speculating based on the phone number but 408 seems more towards San Jose and I doubt broadway cafe would go so far.

Woah I didn’t even think the US allowed imported mitten crabs.

Why not? These are frozen though. I would think that may make importing easier.

Oh thought they were live, haha… oops. I recall @Souperman talking about the crabs before and recall they were an invasive species.

Er… don’t smuggle them back lol

If they were live, I would have reported back how it was already!

Actually, I’ve purchased live ones back around 1990 in Monterey Park. No idea how they smuggled them in. Last fall, I’ve seen frozen crabs in some Chinese Markets. Not sure if it is pre-cooked or not though.

Maybe they just sent someone to catch them in the SF Bay/ Sacramento-San Joaquin Delta? After all, its an invasive species over there. So perhaps there isn’t much fishing rules for those species?

perhaps there isn’t much fishing rules for those species?

No live crabs may be in procession. You must dispatch the crab immediately upon landing. If you keep a live crab, you will be fined if searched.

My wife loves mitten crabs. When the invasion became big news a few years ago, I had fantasies of harvesting all the crabs we and friends can consume.

Was not the case. We spent a fair amount of time fishing the delta, rivers and San Pablo Bay. I have not caught or even seen one crab on a couple hundred+ fishing trips.

For whatever reasons, the catastrophic invasion never happened. Just have to cough up USD$20 a crab in HK. Ouch.

I was in HK in September, 1997 when the stock markets crashed. The first Yancheng Lake hairy crabs had just come in, and were on sale at astronomical prices. Suddenly the price of the crabs plummeted 50%. The crab are called Da Zha crabs (大闸蟹) in Chinese, and 大闸 sounds like “goes down” in Cantonese; they suddenly had become a bad omen.

Not mitten crab or mantis shrimp, but just got some very fresh ‘fan clam’ from some lady on Wechat in a house in Newark. Either $8 or $9 a pound. They have empress clam at $6 a pound and sea cucumber as well. Sometimes they have smaller local rock fish and sometimes 2 pound Alaskan rock fish.

Steamed for 3 minutes with ginger garlic and green onion. Yummy. Needed to do a better job myself next time to get rid of the sand/ mud though.

I really need to get out more. Same male and female mitten crabs as the ones I saw on the online groups are sold right at Marina Cupertino, plus packages of mantis shrimps as well. Cheaper too. All cooked.

The mitten crabs are $30 per box for both male and female. The mantis shrimps are $8.99 for each pound bag. There are a few brands too. 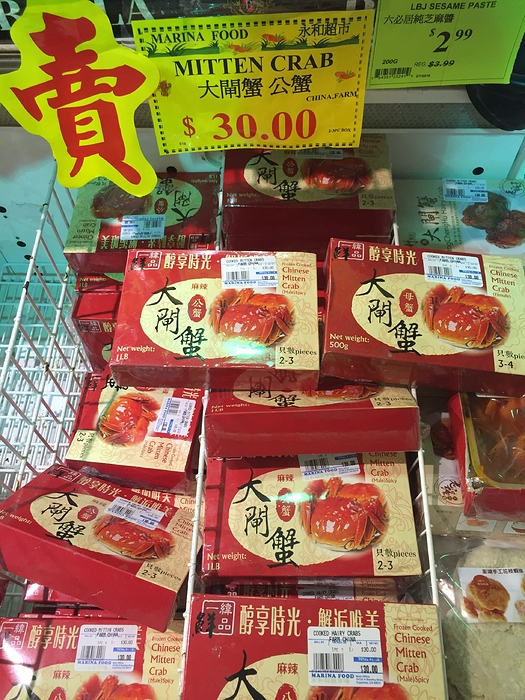 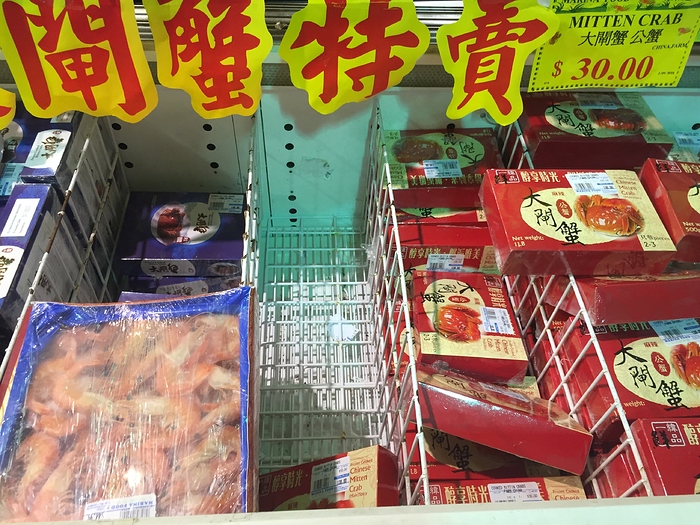 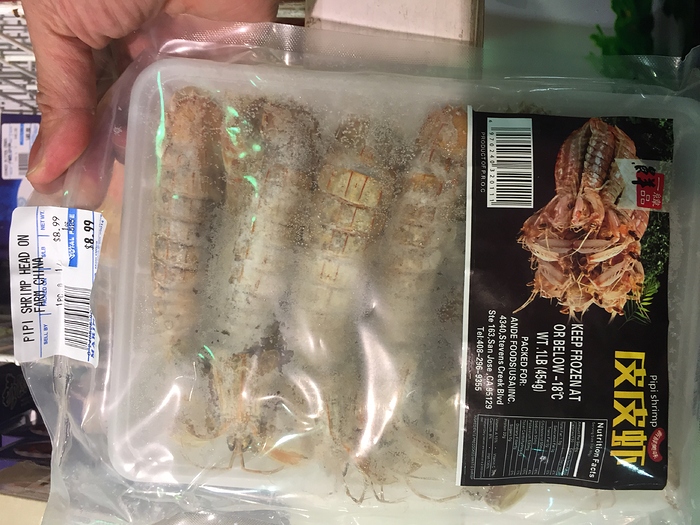 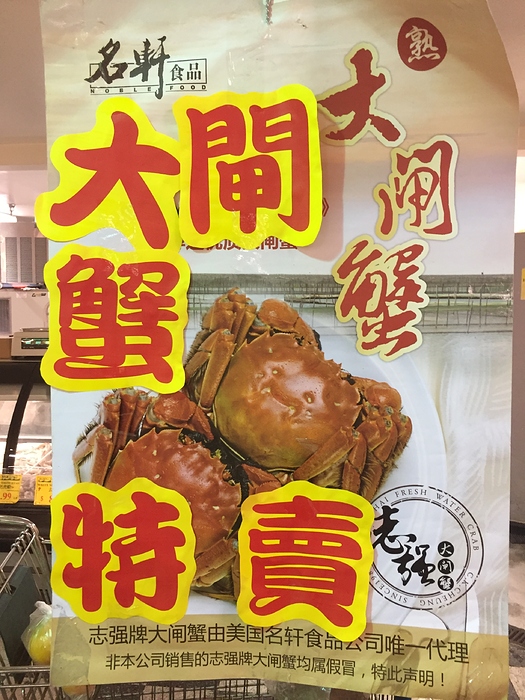 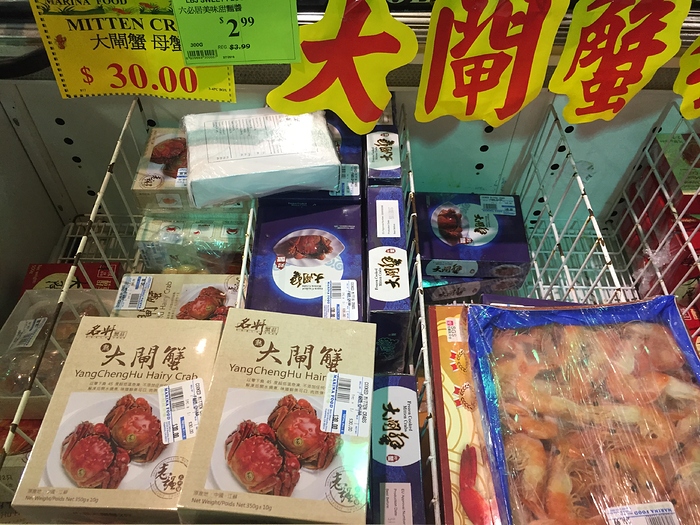 Wow, haven’t noticed these in the nearby 99 ranch markets. Have you bought them and tasted them?

Oh, and what exactly are fan clams?

Two things jump out at me: (1) the dazha crabs are apparently farmed (a practice that’s new to me) and (2) they are cooked “spicy.” The latter makes me suspicious of the quality. Dazha crabs are known for the delicate sweetness of their flesh, and generally eaten without without, or with minimal seasoning. Would you buy “spicy” cooked dungeness crabs? It would be a similar aberration.

I am curious about the cooked crabs too, in addition to cooked spicy for the male ones. I was wondering about the difference between the male and the female crabs at Marina too, because if I get it it would be the male ones, but the spices screw things up. I didn’t see unspicy male ones.

My understanding is live imports are prohibited so why cook them ahead of time. Naturally I prefer to cook my own seafood. I am not sure how much cooking, then freezing, changes the texture.

Farm raised I think is pretty prevalent these days. Too many of us for the crabs to deal with. That said, some of these are labeled with the source Yangcheng Lake, which I would suspect to be likely not true since I am sure they can fetch a higher price in China than selling them frozen in Marina Cupertino.

I’d eat spicy under the bridge dungeness if cooked well though. But even that isn’t very spicy.

Night07 I haven’t bought them yet. I was there to buy a fish so didn’t try.

The name fan clam is my own invention, just a translation of the name that I was told. I am sure it has a proper name. The shape of the shell looked like this: 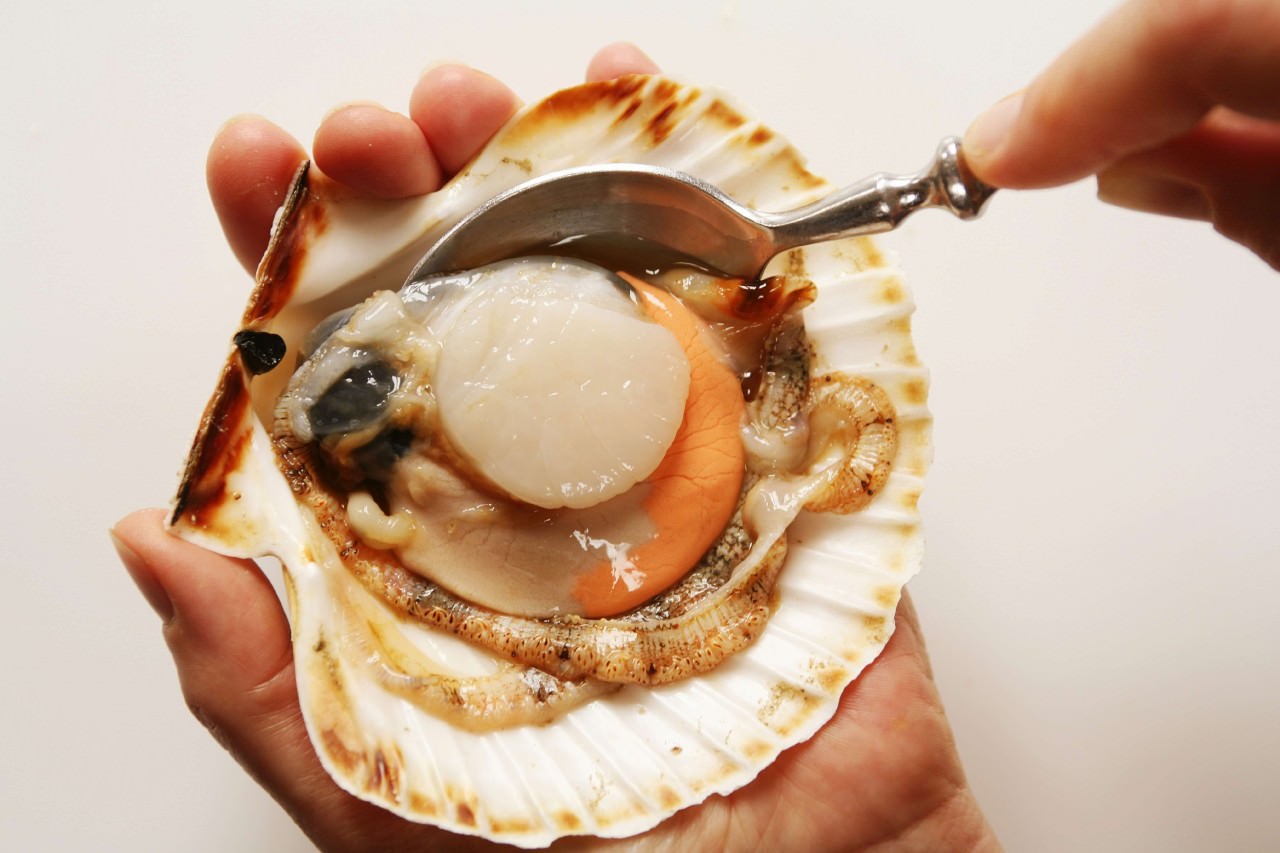 That’s a scallop, I believe.

Yes. She said 扇貝。so I think I was fast and loose with the translation.

That is a sea scallop, au naturel. We typically only get the abductor mussel and not the whole scallop. Probably deserves it’s own thread… Sea or Bay, dry or wet, day boat? My preference is Sea/dry. “Dry” is not what you might think, “dry” refers to the scallop not being stored in a wet bath on board the boat.

Oh! I just saw these two in the little grocery store in Milbrae (right next to the two hot pot places and right across from Royal Feast). 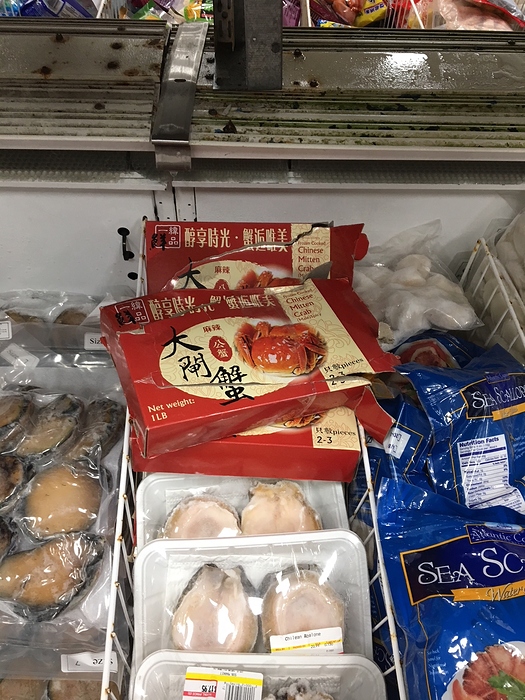 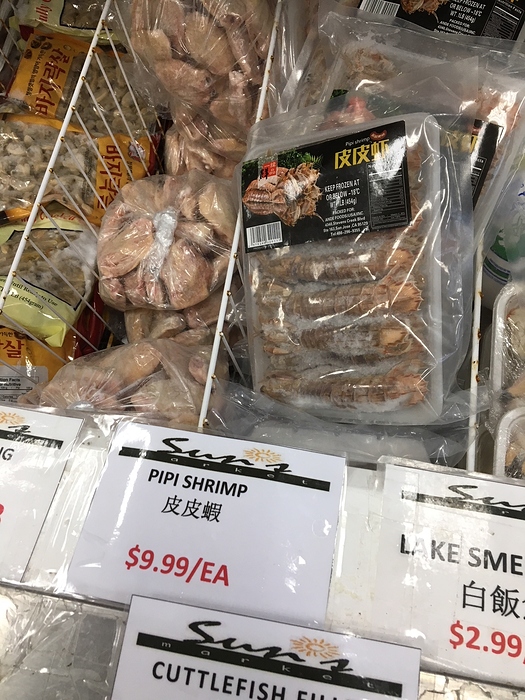 Though looks like a better price down at Marina. Wonder if 99 has any

According to Youdao, the Chinese name is 雀尾螳螂虾, freckle -tailed mantis shrimp.

My only guess is this little thing from wikipedia:

"In Cantonese cuisine, the mantis shrimp is known as “pissing shrimp” (Chinese: 瀨尿蝦; pinyin: lài niào xiā; Jyutping: laaih niu hā) because of their tendency to shoot a jet of water when picked up. "

So… it somehow got mangled to PiPi rather than… PeePee?