Is it true? New owners and staff at Hon’s Wun Tun?
What’s the story here?

Hmmph. One of the very few joints that serve (or used to serve) wonton noodle soup dish in the Bay Area at the 細蓉, or small/ snack, portion, with few numbers of smaller wontons instead of the new style wonton and a smaller amount of noodle in a smaller bowl where the wonton is made as huge as possible to attract people. Looks like recent pictures on Yelp shows that the bowl looks more like 中蓉, or medium portion size, in the last few years.

I haven’t been back since I stopped working in that area more than a decade ago. I remember quite fondly that the bowls of wonton noodle soup that’s perfect as the late afternoon snack.

Here’s a profile of the owner Ng Yuen Wah in an article from 2010. Looks like she bought the place after working there since the inception in 1979. So there was continuity. If she has worked there for nearly 4 decades, she’s probably retiring. 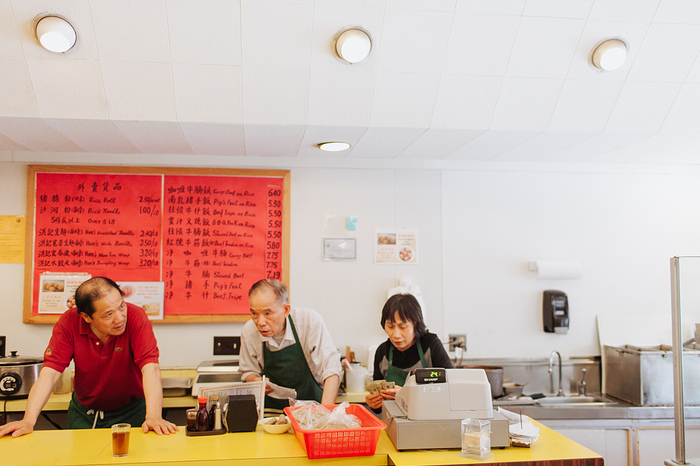 To me, Hon’s wonton and noodles were as close to Hong Kong style and taste as you can get in the USA.

With that said, recent pictures show green onions as garnishes instead of yellow chives, which purists may not be entirely pleased.

The curry beef on rice has been my go-to order…I am hopeful it doesn’t change.

I had no. 8, dumpling noodle soup today. These are called sui gow instead of wontons, right? I think I strayed from ordering wontons because I half remember reading about someone preferring the sui gow at hon’s wuntun ages ago on chowhound. I hadn’t been here in years but while it seemed different it didn’t taste very different to me. Which means i was, well, indifferent overall. I like the petite portions here. Seemed the same size as before. I always thought the broth was thin and almost unpleasantly dried fishy, and i still do, until I shook white pepper and added chili oil to it. I like thin wonton noodles, or the texture of them, but there always seems to be a bit too much alkalinity. The dumplings were fine, I think there were five, with welcome bits of chopped shiitake. Yes, green onion garnish. I don’t remember if there were yellow chives before. Were there? Friendly service, younger than I remember from before, and maybe new utensils. It’s still a place I wish I liked better. I did not think to ask any questions about ownership, sorry. Still, $7 and some change for a good snack sized quick bowl of noodles. Should I be ordering differently?

i stopped working in the area in April, but I’m still only a 10 minute walk away… i should go investigate.

I stopped into the old neighborhood today. Old cook retired, I was told. Definitely new family, younger staff. I ordered the No. 3, Dumpling noodle soup. I am not at all an aficionado of this type of food, but I liked the broth better today than I had in the past. It’s much more flavorful. The dumplings were as I remember them, thin-skinned, but now the pork had a little more funk - which I attributed to slivered bamboo shoot, maybe? I thought I detected some upon taking a bite. The noodles were also as I remembered, with a nice bite. The size issue - the bowl is the same size I remember and as before, I could not finish it, but I didn’t even try. I took more than half of it to go.

The place seemed to be as busy or busier than it had been before, at 1:30 p.m. I’m glad it’s still going.

Traditional Cantonese wonton doesn’t have typically have bamboo shoot in them, mostly just pork and shrimp. So its a little unusual to see bamboo. They aren’t typically funky. Not sure what the funk is for…

not sure either, but the funk was definitely there… i’m a little sensitive to the taste of bamboo shoots as I don’t love them. they always taste a bit funky to me. but it could have been something else…

the funkiness of bamboo shoots, I think, would come from people frequently using canned versions. They are very clean tasting when fresh but I’ve had plenty that didn’t seem to be rinsed enough and had a canned taste. Kinda like artichoke hearts. Frequently you get them served from a can and then they have a vinegar (or some canning liquid) taste to them.

They were originally a spinoff of the Vancouver Hon’s chain, but that chain was sold a decade ago, The current owner is said to be planning a fast food chain called “Hon’s Wonton [sic] House.”

They were originally a spinoff of the Vancouver Hon’s chain, but that chain was sold a decade ago, The current owner is said to be planning a fast food chain called “Hon’s Wonton [sic] House.”

Chain? Any more details about the plan?

I recall seeing this topic and decided to hop on over during lunch time to give it a try. But no chives as you mentioned, mostly green onions. I opted for some veggies when they asked so got some gai lan with it. I liked the won tons in the soup, but I like the ratio to have more shrimp than pork. The noodles were the weakest part for me as I didn’t find them to have that great of a bounce. I enjoyed the soup though. 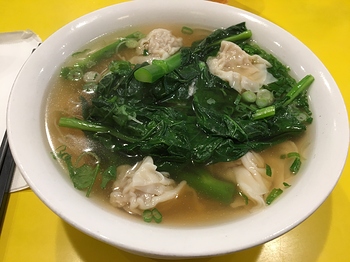 The noodles were the weakest part for me

Ohhh makes sense. But yeah, I can’t recall a lot of places being consistent

I saw the family showing their kids how to make wontons inside though.

Years ago when it was run by the former owners, their wonton were on the tiny side, and the noodle was solid, while the broth was meh. The bowl was the ‘snack’ size versus lunch size, and priced to reflect that.

I can’t recall a lot of places being consistent

I think you are right, but some better than others. My favorite so far is Noodle Village in NY Manhattan. Every time I go to NY for business, I will see if I can swing by NY Chinatown just to have their wonton noodle. Even then, the noodle can sometime a little soft. Not horribly soft, just not perfect. I still like the place the most. Good wonton, good broth, good noodle. Yellow chive all the time and has the Siraitia grosvenorii (aka luo han guo/ 羅漢果) flavor.

@sck Yeah, your experience is exactly same as mine too. Wonton are very tiny. The broth is ok. The strongest point back then was the noodle, and I would even buy some of their noodles too. Many wonton places serve full bowl size like a full meal. I actually love the snack size. Noodle Village in NYC serve the tiny snack size. Four wonton, about half the amount of noodle in a small bowl. No vegetables. 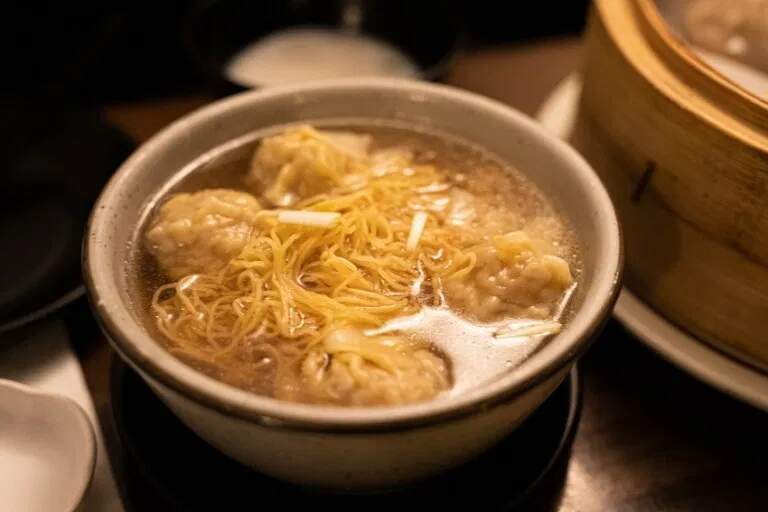 Oh yeah, I remember going to that place for a bowl of wonton in NYC due to your recommendation. I thought they did a good job there!

And yeah I can’t quite comment on the size when I went, but my bowl looked about the same size as others just had veggies on top

May be a different shop? Noodle Village wonton noodle soup does not have vegetables – unless you custom add. Yellow chives are usually added. 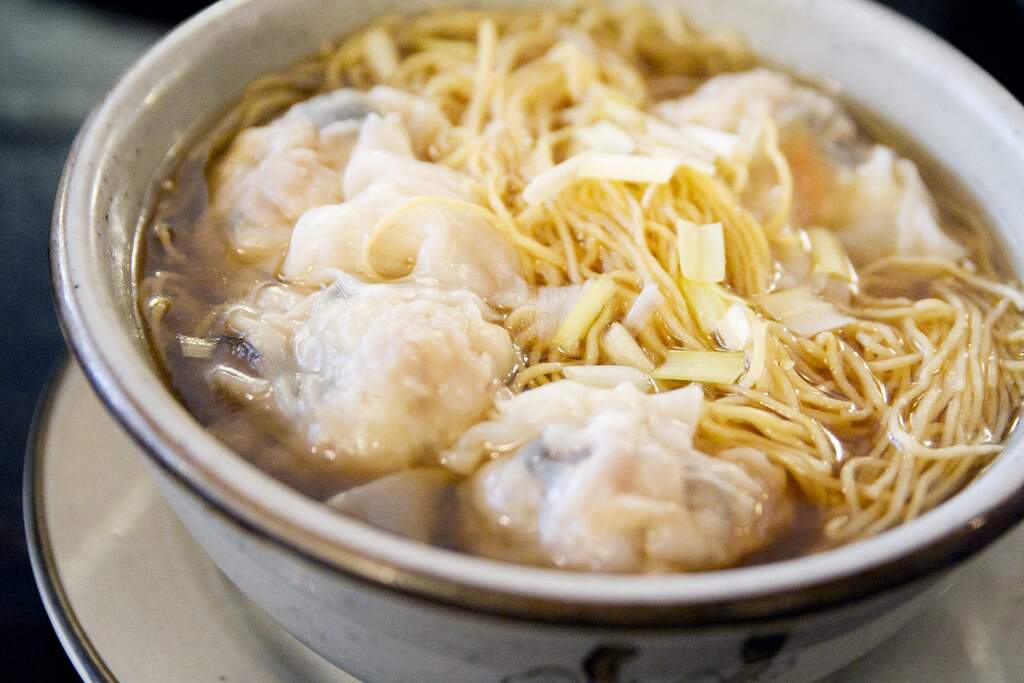 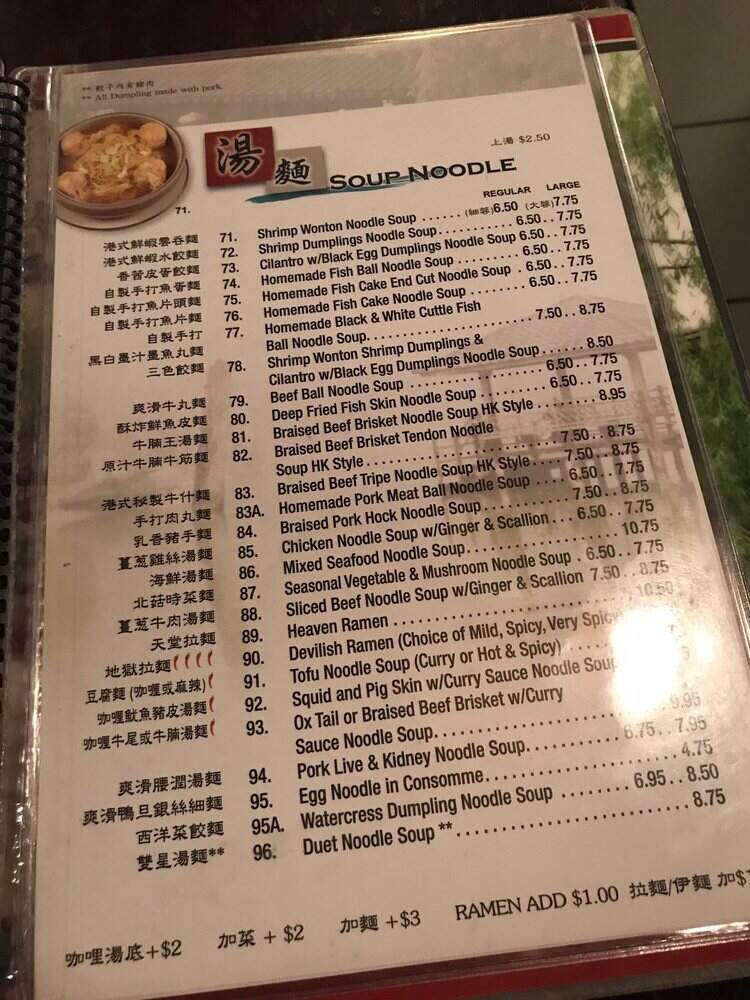