TIL two things: (1) San Francisco has an Avenue of the Palms (it’s on Treasure Island) and (2) its first restaurant tenant, Mersea, has a co-owner who is the best counter-puncher since Donald Trump. 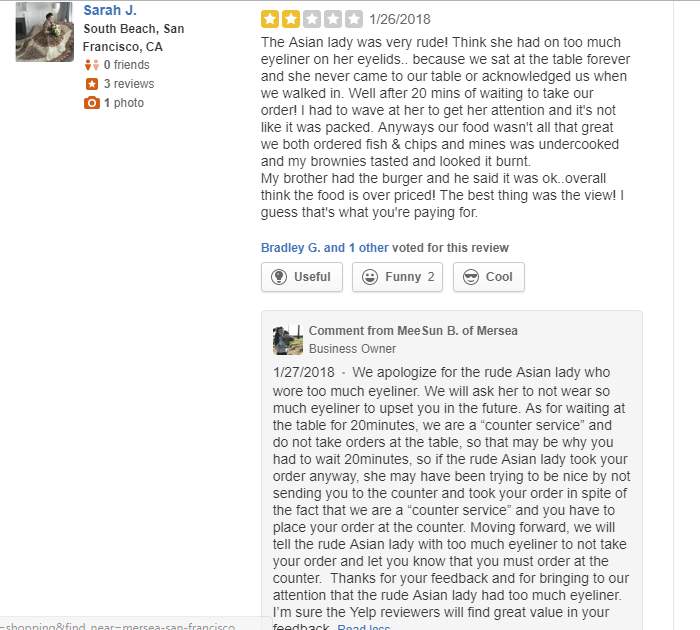 Well, I realize that many here and on CH loves to diss Yelpers, but those diners may have a point - it might not have been obvious that this was fast/casual counter service. Having paid only minimal attention to Mersea’s pre-opening PR, I can honestly say I for one had no idea it was counter service-only.

My DH and I have been known to walk into a new place and because we’re either chatting with one another or just having trouble getting visually “clued in” to a restaurant’s interior design, end up in the wrong spot for reception/service.

In fact, we just made an error last month at a new bistro in Sonoma Cnty - we accidentally walked right past the reception stand, which was empty at the time. There is a long, visually cluttered bar in between the reception stand and the restaurant. From the angle by which we entered, the stand was easily overlooked when empty; it just blended right into the bar chaos - same color/style wood, and it was angled to face a slightly different direction.

We average 120-135 new-to-us restaurants per year. There are any number of interior commercial designs that aren’t strong in both functionality and ease of visual accommodation.

That said - yes, it was a good put-down by Mersea. The problem is that bad-mouthing is something like six times more influential than a positive review. It might be satisfying to Mee Sun B., but if you’re going to be in the hospitality industry it’s not smart to be snarky towards the wallet that holds the $$$.

I love it when owners/management call out stupid people.

I’m a member of quite a few online forums and some make you have a certain post count to actually display public messages. In fact, they even go as far as to moderate your posts to make sure they are relevant. Some even add another level and will only post your comments after you reach that post count AND a certain level of time on the site. So they really cut down on trolls and one hit wonders. I wish yelp did this. I don’t even read any reviews if the person has less than ten.

I REALLY wish Trip Advisor would let readers comment on reviews. It kills me how stupid people can be.

That’s a pretty low bar, unless “best” means someone who flails blindly in all directions, hoping something will connect.

That was irony, my friend.

Hard to tell in these weird times.