What are some of your favorite food/restaurant memories from SF Chinatown? I’m curious about classic restaurants, past and present. Outings with grandparents at Sun Wah Kue, favorite place to dine solo, what you ate waffles with at Capital, first dates at Fong Fong. Feel free to share anecdotes, personal stories and dishes (and prices!) that you miss.

Though I’m not originally from the Bay Area, I’m fascinated by SF Chinatown’s food culture. I’m researching for a project, looking at 35+ year old restaurants like New Lun Ting, Eastern Bakery, Hun’s Won Ton and Capital, but would love to hear stories from other favorite spots even if closed!

A late relative who served in the Navy during World War II kept a scrapbook of his commission, documenting duty and leaves. Among the San Francisco souvenirs is a 1940s menu for Far East Cafe—still there on Grant Street 70+ years later, never trendy nor ever on any foodie radar, but it endured in the officer’s life story and as a venerable Chinatown destination.

I heard they are celebrating 100 years soon! I wonder what year this Far East menu was printed (courtesy of Frank Jang) 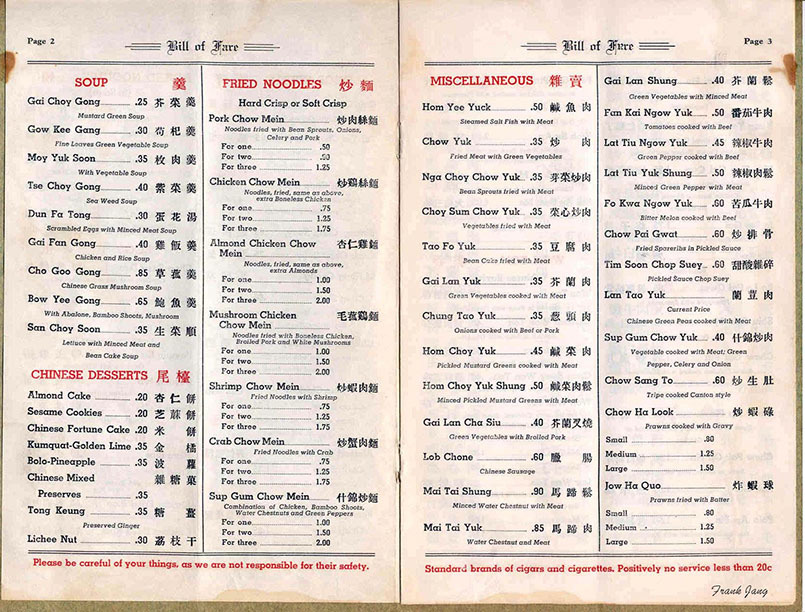 An organization I volunteer for has an annual extended lunch at Yuet Lee to thank the volunteers. For the past ten years or so, we’ve been feasting on crab (the lunch is usually in February), salt-and-pepper squid, whole steamed fish. It’s always good to see the crowd since we mostly work separately, many at home.

ETA: I’m amused by the “Positively no service less than 20c” on the menu. What could it mean?

Are you collaborating with artist Andria Lo’s Chinatown Restaurant Memories project or on your own? It sounds like you are on a parallel track. I fed Andria with a lot of info from my own memories of Yee Jun, Universal Cafe, Sam Wo, Sun Tai Sam Yuen. Jackson Cafe, Woey Loy Goey, Uncle’s, New Lun Ting, Fong Fong, and other haunts of mine from 50+ years ago. Unfortuately this was over the phone, so the only written record of what I dredged up is whatever she wrote down.

I’ve also been working on and off on a chronology of Chinatown restaurants going back to 1849, but it’s a very disorganized effort so far.

Woey Loy Goey (now New Woey Loy Goey) has been around for more that 100 years, but my favorite for longevity is Yee Jun/Kam Lok which underwent a change of ownership and a name change only once but has continued to serve basic Cantonese fare at the same basement location since 1885.

Here is the late Chili Bill Eichinger’s recollection of Yee Jun, which pretty much matches mine. It actually never really closed, just took on new owners and a new name, Kam Lok.

Before its closure, the Yee Jun Restaurant on Washington St. was the oldest existing Chinese place in SF. In its prime it was a hippie haven. A giant bowl of fried rice was 75 cents, and often the one meal of the day for some folks. In addition it had the major funk - marble table tops, cool wooden booths that looked like they could, at any given moment, revolve into the wall and be replaced by an empty duplicate, the previous occupants waking up far out at sea. The waiters all looked to be ninety years old and said little other than ‘you ready order?’ There was this one geezer who called everyone “John”. I would always say my name wasn’t John, to which he would reply, ‘OK John, what you want?’ Later on, in a book on the history of the Chinese in California, I discovered that Caucasians used ‘John’ as a pejorative term for all Chinese men. This waiter was just getting his kicks. The owners seemed to get a kick out of their clientele as well, and paid homage by decorating the beautiful wrought iron cashier’s cage with little signs that said ‘RIGHT ON’ and ‘FAR OUT’ and of course ‘GROOVY!’

And here’s a great Woey Loy Goey story which predates my arrival in SF by almost 10 years, though I did get to know the great Shig Murao.

One night after closing, Shig Murao, Allen Ginsberg, and Gordon Ball visit Woey Loy Goey for a late-night Chinese meal. A large German shepherd follows them into the restaurant and sits next to them. The hostess, not pleased to find the animal in her restaurant, demands of the group, “Is this your dog?”

Shig pauses for a moment. “You may take it to the kitchen,” he announces.

I had a girlfriend who could never remember the name of Woey Loy Goey. She called it the “Huey Dewy Louie” place.

King Tin. By far, the best of its kind in SF Chinatown. Just chatted with a few SF residents a few weeks ago, and they also said that nothing come close to its quality. 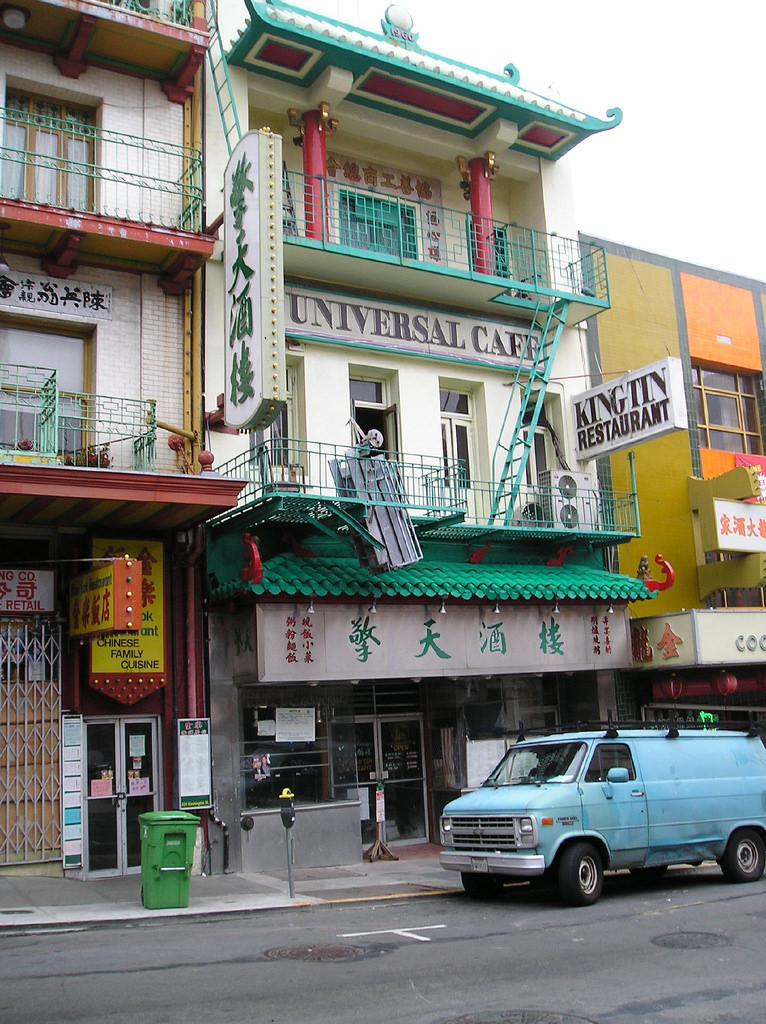 For Chinese charcuterie, that was. Janmae Guey on Stockton St. had better roast duck, though.

King Tin was closed down for wage theft, IIRC.

remember the name of Woey Loy Goey. She called it the “Huey Dewy Louie” place.

Funny, to our gang, it was the Three Ducks.

We used to go downstairs 2 or more times per week, after last call at a local bar (mostly the El Matador on Broadway). The waiters and counter guys knew our crew after awhile. We’d always order “cold tea”, and they’d pour cold Buds into a cold teapot for us.

We’d wash down our roast beef/roast pork/curry lamb with shots of beer in a teacup.

You ran with a classier crowd than I did. Our last call would usually be at Vesuvio’s, San Gottardo, or the North Star. If we wanted to continue drinking, we’d get our cold tea upstairs at what I think is now Great Eastern. If we just wanted to eat, we’d end up at Sam Wo or at Louie’s, an upstairs place on Grant Avenue.

My grandpa worked the counter at Uncle’s in the mid-sixties. He’d mentioned a couple of times how some customers would leave him a two-bits tip for his service.

We were fresh off the boat at the time, and could not comprehend/believe how/why anyone would give such big money to a stranger!! America, truly Gold Moutain!!!

Back in the early 60s we frequented Tao Lee Yun (that’s as close as I can get phonetically). I think it was on Washington or Jackson going uphill from Grant toward Stockton. A friend of ours from the Ornamental Horticulture Dept at CCSF, Howard Quan, had a job working there as a waiter. We’d go there, tell him how hungry we were & the plates would start arriving! Our absolute favorite was the Pressed Almond Duck. Have never tasted any version that even came close & now can’t find it at all… Those were good days!

Tao Lee Yon, 816 Washington St. It later became the Golden Dragon, and was the scene of the infamous Golden Dragon massacre 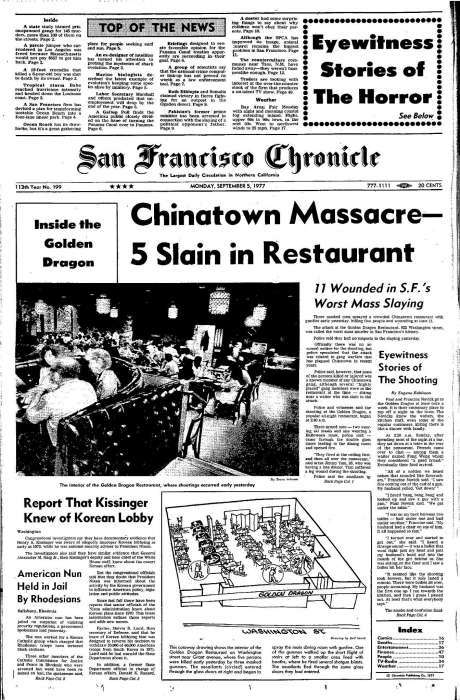 Are you collaborating with artist Andria Lo’s Chinatown Restaurant Memories project or on your own?

hi Luke, it’s Andria, your restaurant photographer at EBX. At the shoots, I like to ask owners if they’ve noticed you dining or remember interacting with you. No one’s ever been sure, most have no idea, and I haven’t yet seen your pic up (which would probably be uncommon at a mom and pop spot). I wanted to say good job on maintaining the anonymity!

Tks Gary, I didn’t realize that!

Golden Dragon eventually became derogatively known as “Sitting Duck” amongst us former customers. As I recall, the only deaths and casualties were tourists, who did not know that diving under the tables while bullets were flying was part of the authentic Chinatown experience.

Any Wah Ching/Joe Boy/John Louie or wannabe OG knows to watch all entries into any venue where they are exposed. Being aware of one’s surroundings was just good sense when dining in Chinatown in the 70’s.

There were actually three locals killed, including a waiter at the restaurant. All, including the tourists, were Chinese.

Hi Gary! It’s Andria.
Your Chinatown anecdotes are great. Love the one about how you learned to use chopsticks at Sam Wo because grumpy server Edsel was joking around and refused to give you a fork

I’m glad Sampson recommended the site to me!

Ah, so you ARE Andria. Fooled me. CTP=Chinatown Project?