I went to Savoy (officially I think the name has been Savoy Tikka Kabab) about 6 months ago and thought there was a different vibe. I went a few weeks ago and the changes are many. Confirmed online by other reviewers, there’s been a change of ownership/management, not just an updating to meet the competition from Aga’s a half mile away. There’s a lighted, animated menu board flashing pictures of dishes, a smiling hostess at the counter, a laminated fold-out, multi-page menu and servers bustling around the dining room. Before, you ordered at the counter off a slip of paper showing what was available for the day; the counter person was always a curt if not gruff man and you went up to the counter to get your order. I always got food to go because the tables were all large.

The menu now also offers a lunch special for $8.49? The hostess was tolerant of my difficulty grasping the ordering process - I was going to try the biryani but didn’t grasp that the special comes with one rice dish, one curry dish and one grill item plus naan or plain rice. 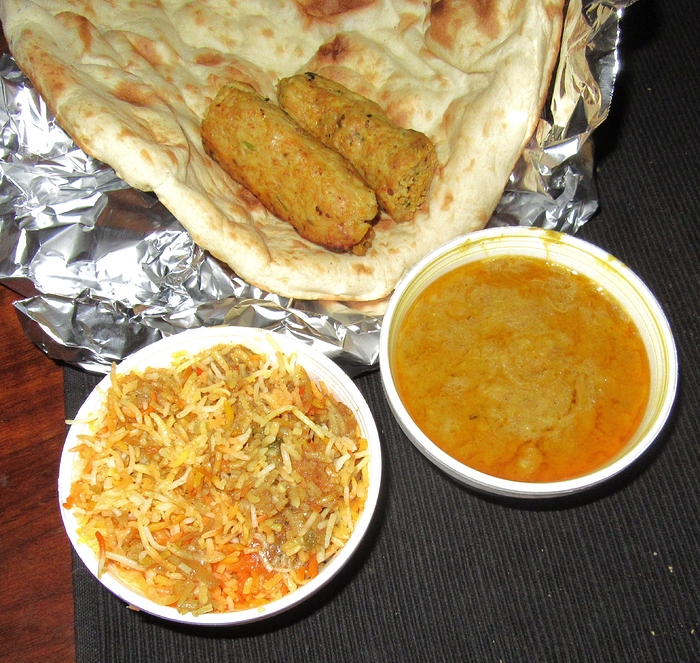 I got the chicken biryani, Haleem, and Seekh kabab, which had to be broken in two to fit into a to go box. Presentation - granted I got take out - was totally unimpressive. The biryani is described as ‘traditional Pakistani dish with gravy.’ The gravy was already mixed in - this was the wettest biryani I’ve ever had. I wonder if I’d ordered just biryani off the main menu if I’d have gotten the gravy on the side?

The haleem was disappointing, very bland, and I was without any cilantro to add (forgot I had some fried onions in the pantry I could have used). The kabab was the best item. The naan, alas, wrapped in heavy aluminum foil for the trip home, wasn’t as good as it would have been in-house. It’s a crime to do that to good naan

I’m not sure the name of the restaurant is still Savoy - that word has been taken down off the building. It’s still called Savoy on the website.

Meanwhile last week I went to the formerly adjoining (passageway between the two) grocery store next door, which is now clearly named Manpasand Grocery # 3 (the other two are in Austin - I didn’t know Austin had any Pakistani community). The changes here are even more striking. Previously you could see from one end of the store to the other over the tops of the shelves; now the shelving is taller and blocks such a view. I’d guesstimate the number of products has at least doubled. I’ve always thought Savoy Grocery was the largest Pakistani grocery in Houston - certainly the largest I’ve been in. it’s no larger but it’s got a lot more product. In some cases, however, there may be less choice. I found only one brand of Tea Rusks and many, many, many cake rusks. I don’t know what the difference is - I’ve always just bought the tea rusks. i guess I’ll have to try the others. Also I found only one variety of Salted Jeera Biscuits (cumin cookies), a favorite of mine. Previously, there were as many as three brands to choose from. Maybe I just didn’t look hard enough; there was so much to browse, so much to try to take in.

The checkers (2) were smiling ladies; the checkout lanes had conveyor belts and scanners to pass the items over, just like a mainstream grocery.

It’s a very impressive make-over and I look forward to going back to do some more browsing.