Finally getting around to sorting through the photos from our recent trip to Charleston and Savannah and wanted to share some thoughts with you HOs! [Will add pics momentarily.] Thanks to all who helped me choose restaurants - overall it was a very good trip, foodwise!

We started in Savannah with Starbucks and a trip to Bonaventure Cemetery, which was lovely. We headed downtown thereafter for our first meal of the trip at Vic’s on the River. They seated us at (IMO) the best table in the house, with a huge bay window overlooking the river, and proceeded to impress us with the food (for the most part). We started with a couple of signature cocktails (both of which were too sweet for our liking; this would become a theme throughout the weekend) and an order of mediocre crawfish beignets (which were really more like empanadas). Luckily they redeemed themselves with our entrees, a delicious soft shell crab BLT for me and excellent shrimp and grits for DH. Some people may have found the grits too firm, but I prefer them this way - lots of cheesy flavor and good coarse texture. Shrimp were fresh and perfectly tender, and I loved their “gravy,” which was actually a tangy rosemary sauce. My crab was also fresh and plump and the remoulade sauce was delicious. Onion rings also not bad! 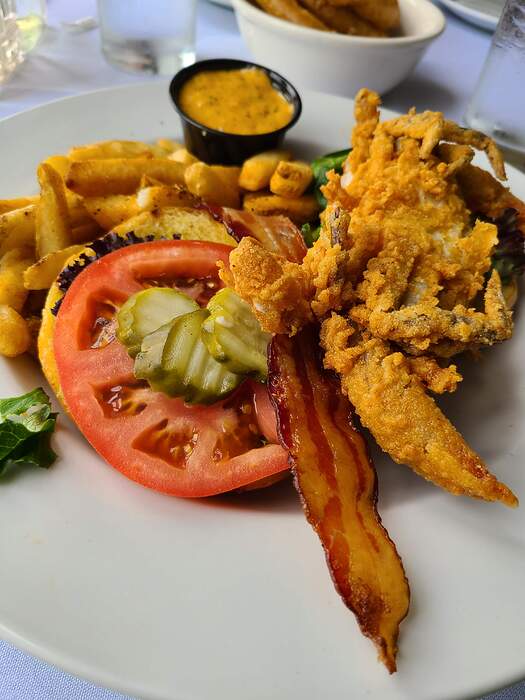 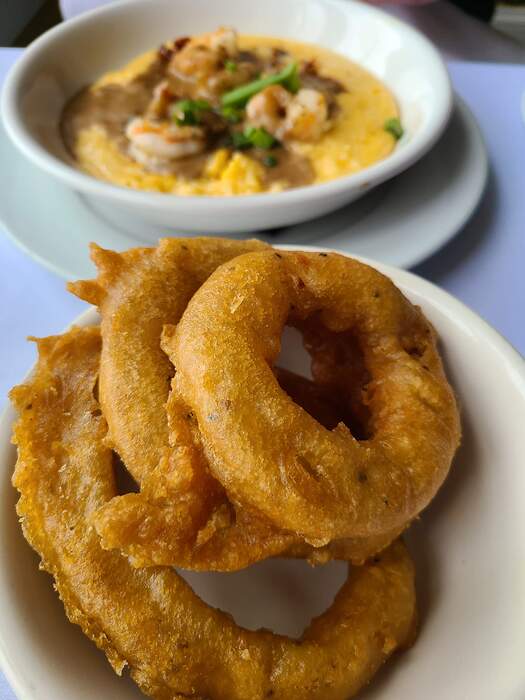 After thoroughly exploring the historical downtown, we headed out for pre-dinner drinks and had a TOUGH time finding a seat - given that it was spring break, the entire town was crawling with (drunk) tourists. We ended up having a beer at Moon River (I had an interesting Belgian Amber with plum called Averted Vision), then going to Husk for a quick cocktail at their bar before dinner. DH had an Old Fashioned and I tried the Man About Town (Rye, Calvados, Vermut, Blood Orange, Sorrel), both of which were too sweet despite us requesting they go light on any sweet ingredient.

I was really looking forward to dinner at Husk but sadly we were underwhelmed - probably a case of unmet expectations, but I also felt they overpromised and underdelivered. The menu, which is separated into Raw Bar, First, Supper and Sides, was pretty limited - more so than I expected given what they post online. DH, who is not a big fish eater, struggled to find anything interesting for a first course. We ended up ordering the tuna and hamachi crudo dishes, the pimiento cheese tartine and a cheese plate for our first course and duck (DH) and cobia (me) for our mains.

The hamachi crudo was almost ceviche-like, served in a tart rhubarb vinaigrette with pistachios. Excellent combination of flavors. The tuna, on the other hand, was fine in and of itself (fresh/good quality), but the other elements (radish, sea beans and bourbon barrel aged soy) did nothing for it - in fact, the soy clashed badly. 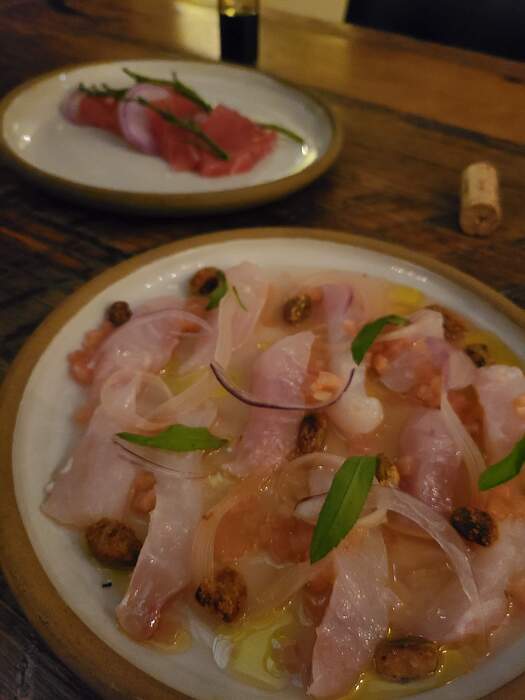 Normally DH would not order a cheese course early on in a multi-course meal like this, but there wasn’t much available in the first course menu aside from two uninspiring salads and the tartine I planned to order. It was fine, but nothing special. The tartine, on the other hand, was marvelous - perfectly spiced, creamy clouds of tangy cheese on smoky, warm grilled bread, accented with crunchy pickled carrots and earthy radishes. We should have skipped the cheese plate and ordered two of these! 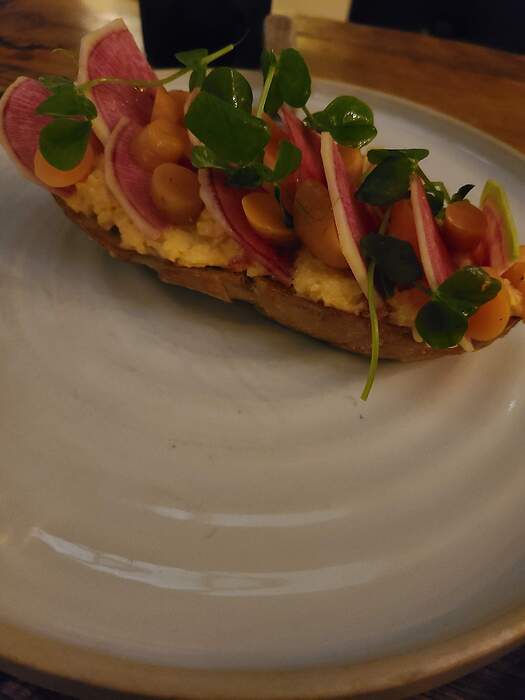 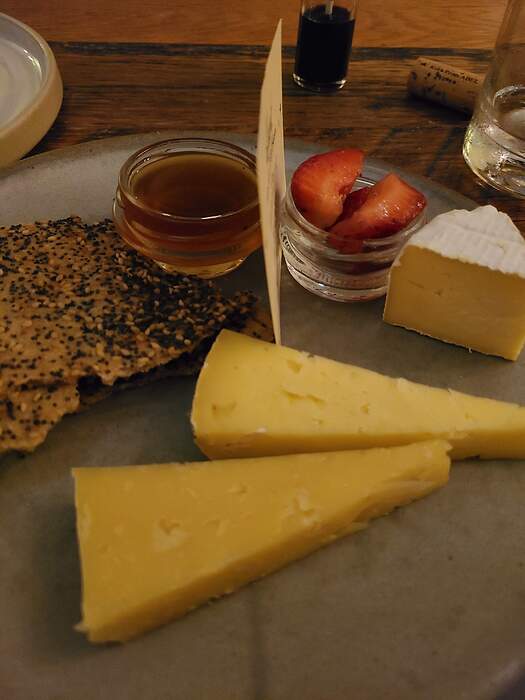 Mains were the biggest disappointment. Our waitress went out of her way to recommend the duck, specifying that it was a half duck, with a seared breast served atop congee into which they shredded the confit leg/thigh. DH loves duck confit so he opted for this instead of the beef he had been leaning toward. When the dish finally arrived (there was a LONG, unexplained pause before this course), there was so little duck on the plate that I actually asked the waitress what happened to the confit. She (rather defensively) retorted that it was mixed into the congee, and DH was over it by this point (it was almost 11pm) so I let it go, but I swear he found no more than three small shreds of confit in the congee, if that. My cobia was fine but very pedestrian, underseasoned and served on a bed of “green gumbo” that was really just soggy, vinegary greens. We also ordered a side of broccoli rice and mushrooms/brassicas, both of which were meh - lots of vinegar and not much else. 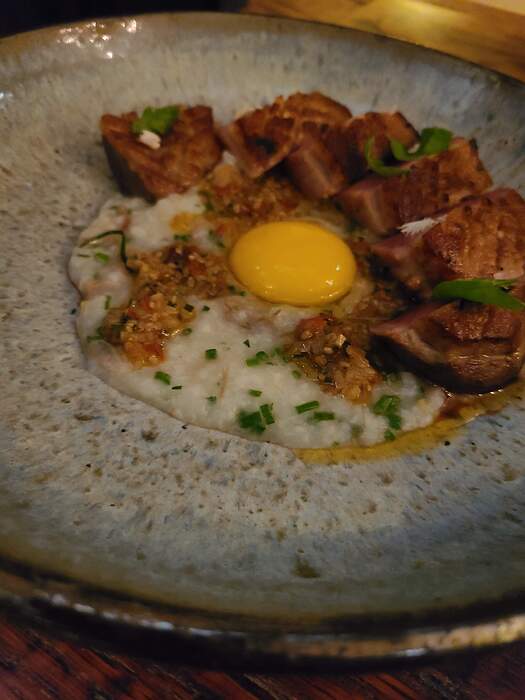 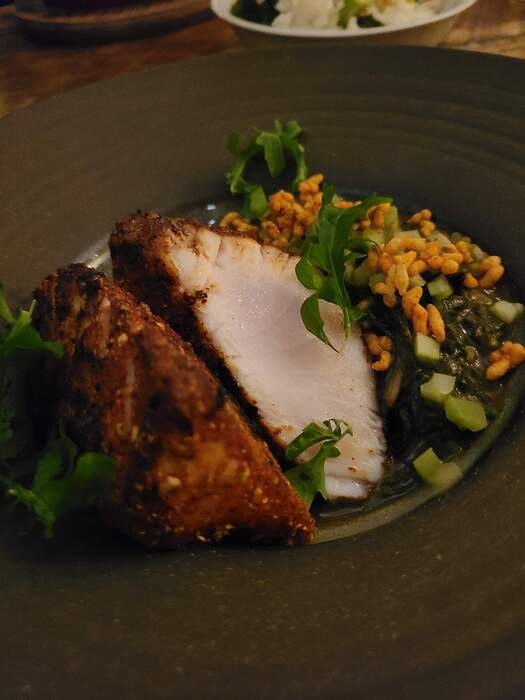 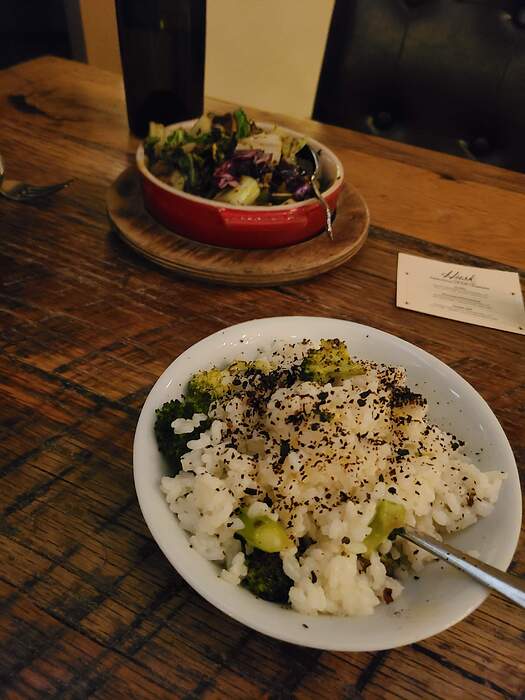 We declined dessert but still didn’t get out of there until almost midnight (after a 9:15 res). They are clearly trying for a Michelin star but IMO they have a LOOOOOOOOOONG way to go, both in terms of food and service.

Anyway, we got up bright and early the next and and enjoyed lovely weather on our drive to Charleston, where we headed straight to Sullivan’s Island to check out Fort Moultrie before going to Rodney Scott’s for lunch. If you like Carolina-style BBQ, this is a solid joint! I ordered the pulled pork, which I prefer to ribs if I’m eating Carolina style - I dressed it with a little of their vinegar sauce and it was just right. DH’s ribs were toothsome and smoky, but he prefers a dry rubbed/sauced rib, so he was a bit disappointed. The two non-vinegar sauces they offer were both pretty terrible IMO - too sweet and with an off-putting fake smoke flavor. Sides were good across the board - DH particularly loved the baked beans - and I ordered some of their pork rinds to snack on later, which were fantastic. 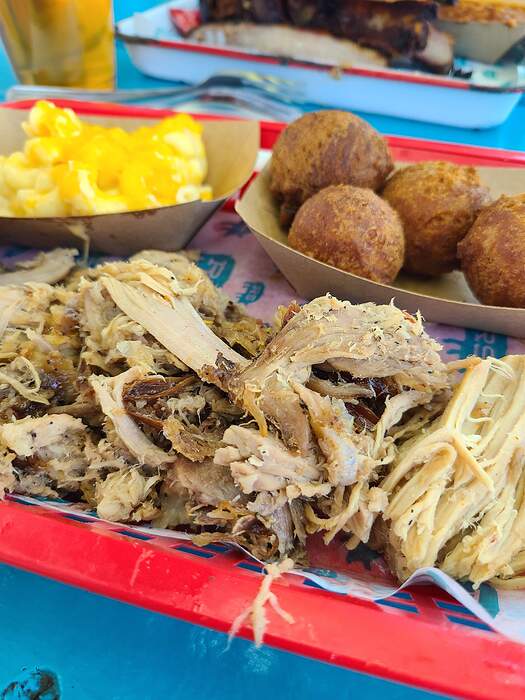 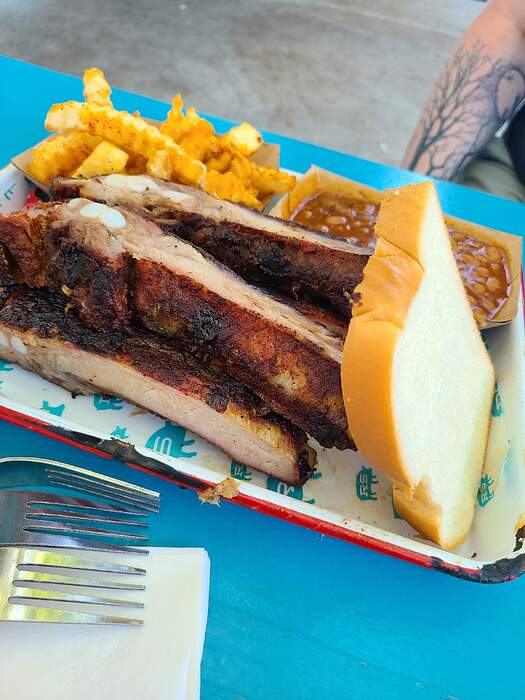 We worked up an appetite exploring the waterfront and then headed out for pre-dinner drinks. We wanted to go to the Gin Joint, but it was closed (Sunday) so we punted and walked across the street to High Cotton instead. Great call! We grabbed seats at the bar and enjoyed the convivial atmosphere and live music along with a couple of nice cocktails and a shot of local rye before heading over to Poogan’s Porch for dinner. A couple next to us ordered a full meal to eat at the bar and the food looked excellent - after eating at Poogan’s, I wish we had followed their lead!

Not to put too fine a point on it, Poogan’s was an unmitigated disaster. We started with she-crab soup and pimiento cheese fritters, both of which were clearly purchased at a restaurant supply and reheated. The soup was thick and gummy and the fritters were just deep fried cheddar, not a hint of pimiento flavor (though I will say the bacon jam that came with them was decent). 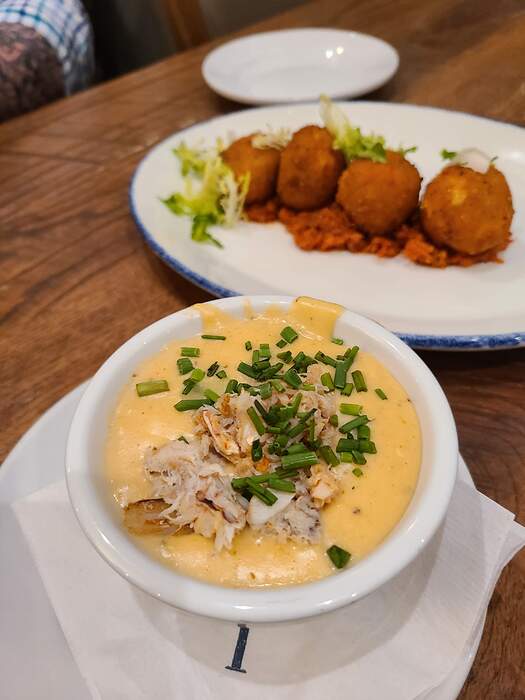 Extremely sloppy presentation, too, which did not improve with our entrees - shrimp and grits for me and chicken fried steak for DH. The grits were runny and slopped into a bowl with bland gravy and rubbery shrimp. DH’s CFS was fine in and of itself, but served on dry mash and covered with barely reheated frozen pearl onions and peas. Bar service was so slow that we finished our meals long before they got around to bringing us a second glass of wine (our waiter did at least apologize for this). Needless to say, we skipped dessert. Really disappointing, especially since the restaurant itself is in a lovely historic home with tons of beautiful original woodwork and other details. 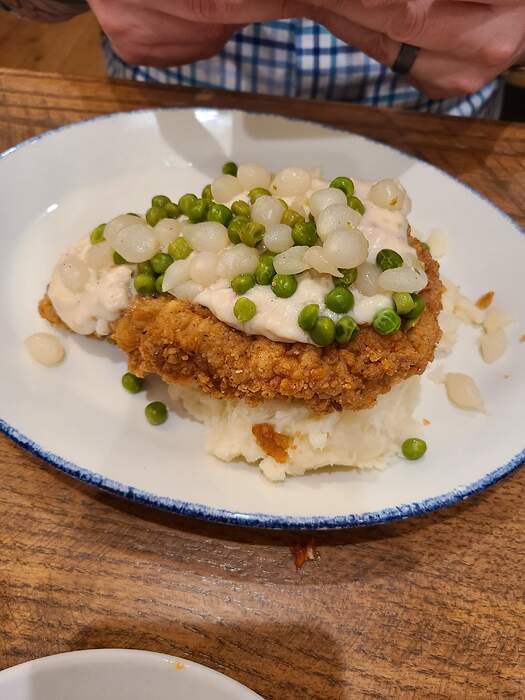 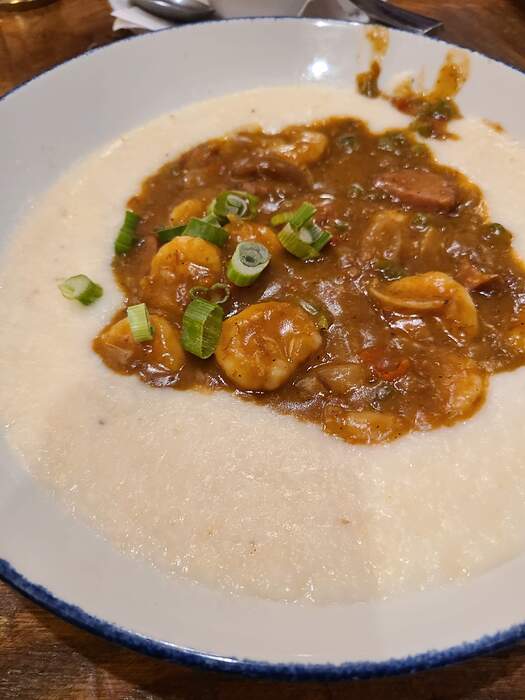 Luckily, our last day brought redemption! We drove out to Magnolia Plantation in the morning and then headed to Nigel’s Good Food for some Gullah Geechee cuisine/soul food. Very obviously a local favorite - we grabbed the last two seats next to some guys from the local AC repair shop and watched a line form thereafter. Great homestyle, rib-sticking food - fried chicken, Geechee wings and all the sides were just fantastic, hot and fresh. I loved the red rice in particular. The only thing I wouldn’t order again was the little deviled crab - although the flavor was good, there was too much bread, not much crab. The sauce (sweet/tangy) on the Geechee wings was also a little overwhelming given the quantity, but it was delicious - I would just get it with the fried chicken on the side next time. Our neighbors’ dishes looked equally fantastic. 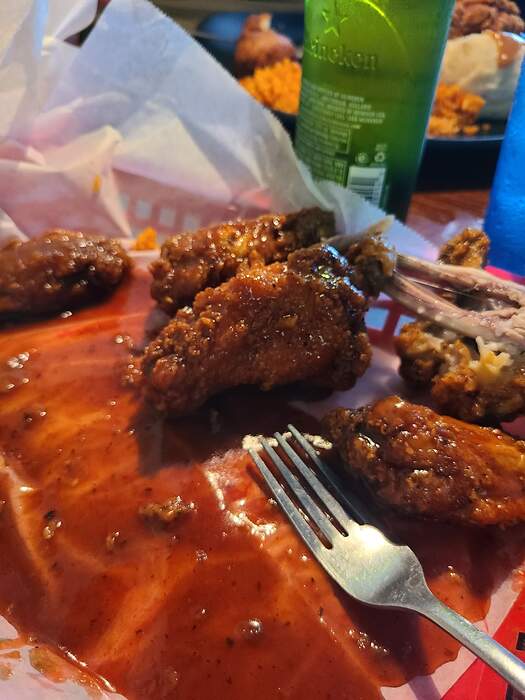 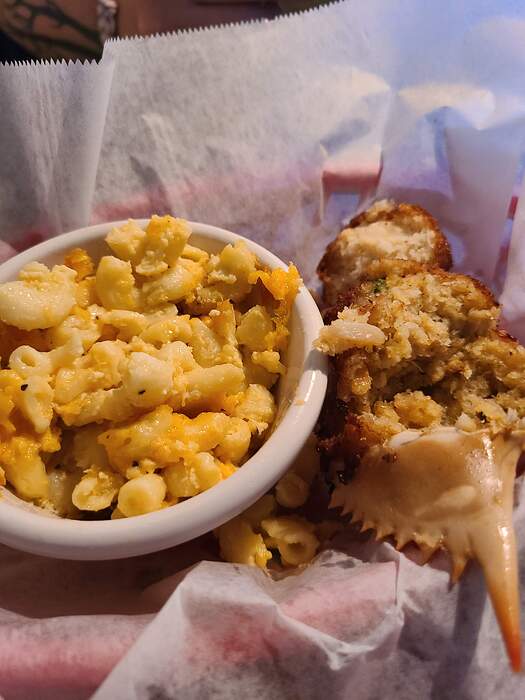 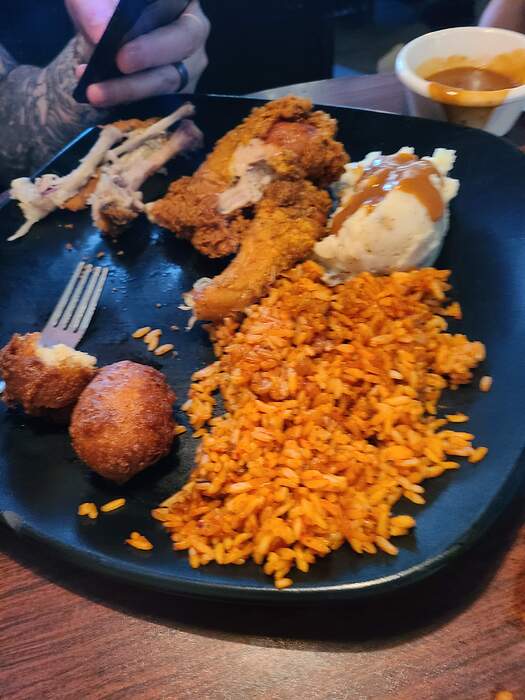 More sightseeing, then we capped off the trip with our final dinner at Slightly North of Broad. This was one of our favorite meals of the trip - while it wasn’t perfect by any means, the bustling atmosphere and service were really lovely and most of the food was wonderful. We started with two of our server’s recs, clams for me and BBQ shrimp for DH - these were two of the best dishes of the entire trip. Fresh seafood and perfect execution, great balance of flavors. For our mains we went with the steak and lamb - these were a little less successful but still good. The ribeye came with muhammara, which didn’t really work so well with beef but was actually excellent with the lamb, so we mixed and matched condiments. The beef itself was not of the highest quality (which was a bit annoying given the $60 price tag), but it was cooked perfectly and quite acceptable with the other condiment, sofrito butter. The lamb was a better cut than the beef but its accoutrements were a bit blah - the red onion confit was undercooked and the red pepper relish was pure sugar. We also ordered a side of Brussels sprouts, which were excellent - smoky and al dente. 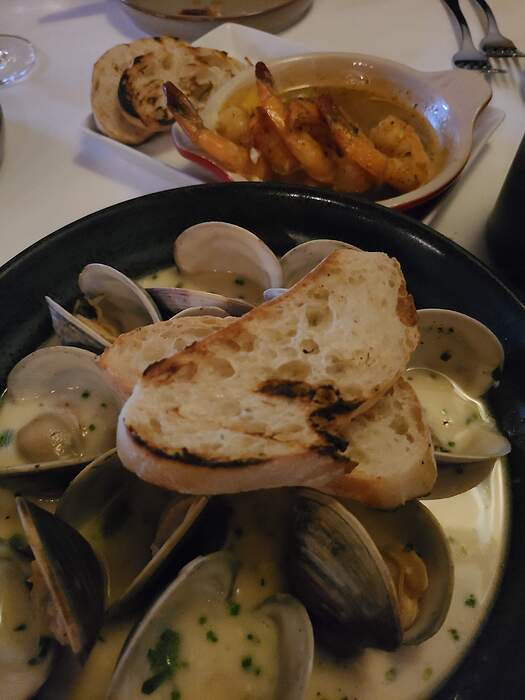 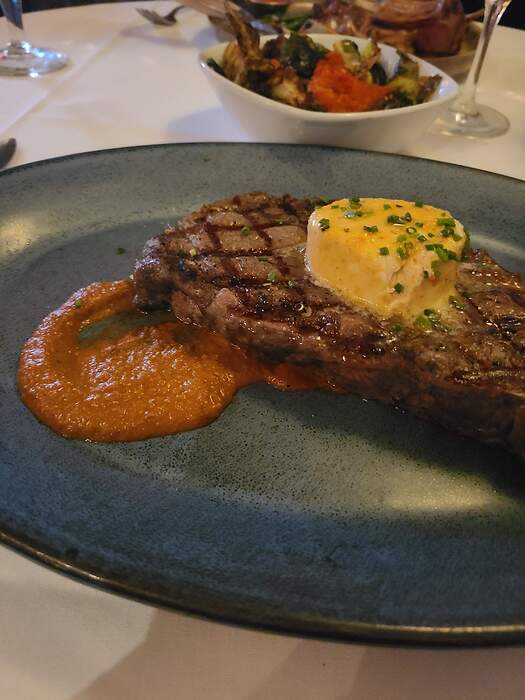 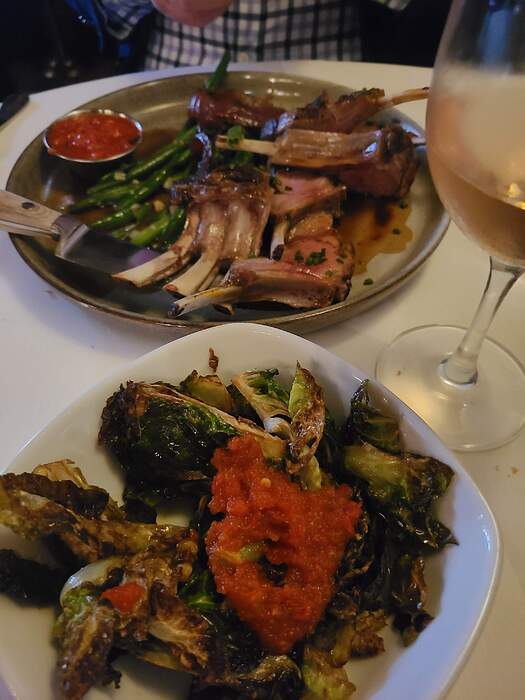 We finally made it to dessert! DH wanted the blackberry key lime tart and our served recommended the chocolate pot de creme, so we decided to try that too. Both were winners, especially the pot de creme. Not too sweet, incredible silky texture. A really nice dining experience overall. We learned from our server that SNOB and High Cotton are owned/operated by the same restaurant group, so I would anticipate an equally nice experience at HC. We will definitely return to one or the other if we return to Charleston, which we hope to do soon - it is such a beautiful, charming city. Thanks much to all of you HOs for helping plan a great trip!

Forgot to mention, we did get to the Gin Joint on Monday before SNOB - we enjoyed the atmosphere but I felt like the drinks, while they sounded interesting, suffered from poor execution and lack of balance (one was watery, another overwhelmed by anise, all too sweet).

Thanks for the trip report! Interesting highs and lows, glad the trip overall was rewarding!

Thanks for taking the time to write up this helpful report. Savannah seems like some sort of culinary outpost to me - while we enjoyed our stay, the food experiences didn’t match.

Sadly the pics from Poogan’s don’t even look appetizing!! But happy to hear your experiences elsewhere were mostly good. I hope we’re able to revisit soon.

thank you for the wonderful trip report, good to hear snob and high cotton are still good.

As to drinks, I find that preparation of “Woodford Reserve on the rocks” is dependable just about everywhere.

And thanks for the great report

In regard to Charleston, and a bit off topic, Big John’s Tavern, which was in my mind sort of the ultimate Dive, except they had great shrimp and roast beef, has re-opened upscale in the same location, apparently with a “speakeasy” in the back instead of pool tables.