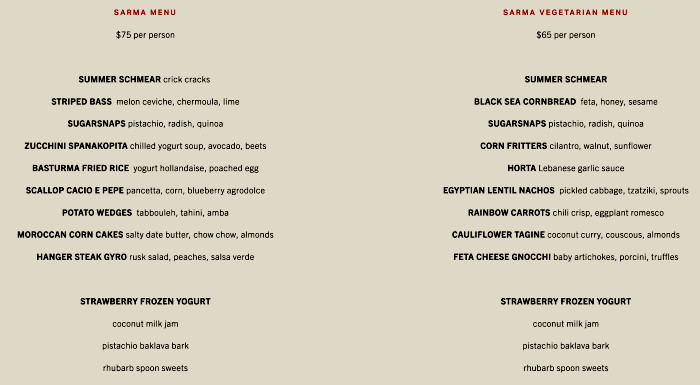 Seems like a very smart survival mechanism given staffing shortages and general uncertainties. Allows for predictability and limits what they need to keep in stock. I’d support this for any restaurant that feels they need to go this way to survive, while hoping they’d feel able go back to a la carte ordering in the future. What are your thoughts?

ETA: I would happily order and pay for either of those menus even though each contains items I’d have to pass on due to allergies.

As a dedicated carnivore, I’d be pretty annoyed to be stuck with a 10-course tasting in which seven of the courses were vegetarian or vegan.

My husband and I love Sarma. We went often to sit at the bar and share some of the a la carte menu. We were also thrilled to pick up take out a la carte many times when that was available during the pandemic.

Sad when take out ended…

We’d happily eat in or take out close to $75 at a time, exclusive of alcohol, which we always get in addition… I have enough experience to predict each of these dishes are supreme. But too much food for the two of us. So we’ll have to wait until a la carte returns.

The question will be if they plan to change the prix fixe on a very regular basis otherwise people will have the same set/dishes over a long period of time (and might be less likely to return). Also, do they serve it tasting menu style (coursed out, over a longer period of time - which we highly prefer, as we love tasting menus in general) or as a prix fixe (which is often more served family style with many dishes st the same time (to also turn the tables faster - which would be a deal breaker for us)

They have changed the prix fixe several times, at least from what I’ve seen on the web site.The web site states " RESERVATIONS REQUIRED. A MENU MUST BE SELECTED FOR THE TABLE, AS EVERYTHING IS SERVED FAMILY STYLE.

We MAY BE unable to accommodate allergies or modifications to the menus at this time."

all i know is that I’ll really miss those breakfast sandwiches they made during the pandemic.

@GretchenS and others: you’re undoubtedly right about the business end of things.

From the personal pov, though, as @Madrid said it’s a lot of food and would be too much for me, too. Plus, I like choosing and for that reason I’ve never much cared for either prix fixe dinners or tasting menus, the latter especially because of the time involved. This is a personal preference, and one that I violate only occasionally if there’s compelling reason (Pujol in 2019, for example). We do throw 8-10 hour long meals in our own home, but only when the group is large enough (16–20) that people can mingle in separate smaller groups over the course of it, and we can serve some courses (appetizers, dessert) in different rooms even if the main meal is a single affair at a single long table. Hard to do that in a restaurant.

Oh geez. We supportably Sarma quite heavily during the pandemic. However, if this is permanent they will now become an infrequent place for us rather than every 1-2 months. After being accustomed to selecting out own journey there, I don’t think I will be as happy with prix fixe where several of the dishes we may not have ordered otherwise. Sort of a bummer.