Hey, all…I am heading up to Santa Rosa for work this weekend. I have Single Thread booked for Saturday night. Looking for a place to have dinner on Friday night when I arrive. A few placed I have on my radar:

I’m a teetotaler, so wine list/cocktail programs are of little consequence to me. Just delicious food served up right.

Thanks in advance… I also posted this on FTC, but I think there’s a lot more bay area action going on in these parts

Hi, I also answered this on Chowhound but am leaving it here too in hopes of generating some discussion.

I live in Santa Rosa

My favorites are
Spinster Sisters
http://thespinstersisters.com/

I think it depends on whether you want contrast vs Single Thread, or complementary.

Spinster Sisters is a very well-executed, sophisticated-but-casual neighborhood bistro, in the true sense of the word. It is creative CA/global cuisine, very veggie forward and light in feel compared to, say, Valette/Healdsburg.

Valette is very good as well but the food and focus are more tavern-like, the food heartier and heavier although still well-crafted.

We found service at Spinster much better than Valette. YMMV.

Bird & Bottle would be most comparable to Valette: heartier food, generous portions. It’s good, but Valette is a half-level higher. Service at all Stark Grp restaurants (B&B is their newest) is a strong point.

Not familiar with Flower + Bone. Would not recommend John Ash: beautiful restaurant, mediocre overrated food. We were really shocked at how bad the food was. By far one of the worst restaurants we’ve been to in Sonoma Cty.

We really loved Bistro 29 when we first discovered it, and had two really excellent dinners. But the last two have been increasingly disappointing. Only the roast chicken was good, out of four entrees at our last meal there. It’s off our rotation list, but maybe jackiecat has been there more recently (our last meal there was May 2015) so things might have changed.

Thanks for the repost. I purposefully posted here as well at FTC and CH, mostly to see from where the most robust responses might arise. On FTC, us Angelinos are rather engaged, but the SFBA discussions are not quite as active.

Thank you for the generous feedback!

Are you flying into Sonoma County Airport? I am curious if restaurants between your destination airport and your hotel, or along the drive, will give you more options (or headache).

I’m flying into OAK, renting a car, and driving up. Hopefully, I won’t get settled into the hotel too late!

SHED in Healsburg is very good also for casual but very foodie oriented dinner. In Santa Rosa itself not so much choice - I’ve heard mixed reviews of Flower + Bone though I have enjoyed breakfasts at their Naked Pig - maybe try that if you’re around for breakfast. Spinster Sisters is always good and reliable. Bird & Bottle I’ve had some great dishes and some ok. It’s more geared towards small plates. 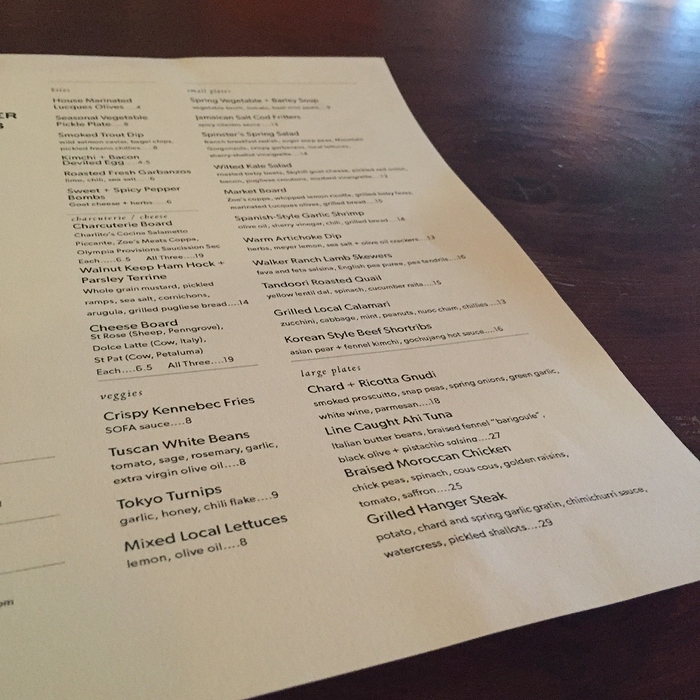 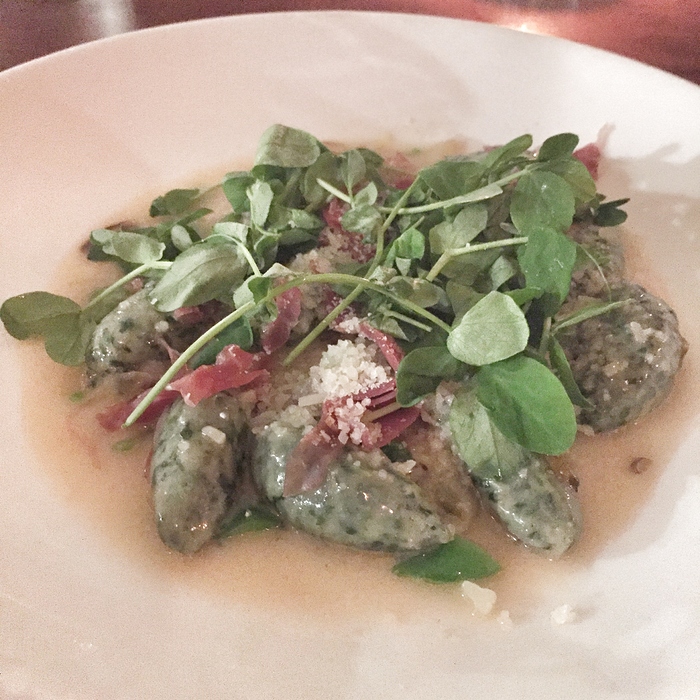 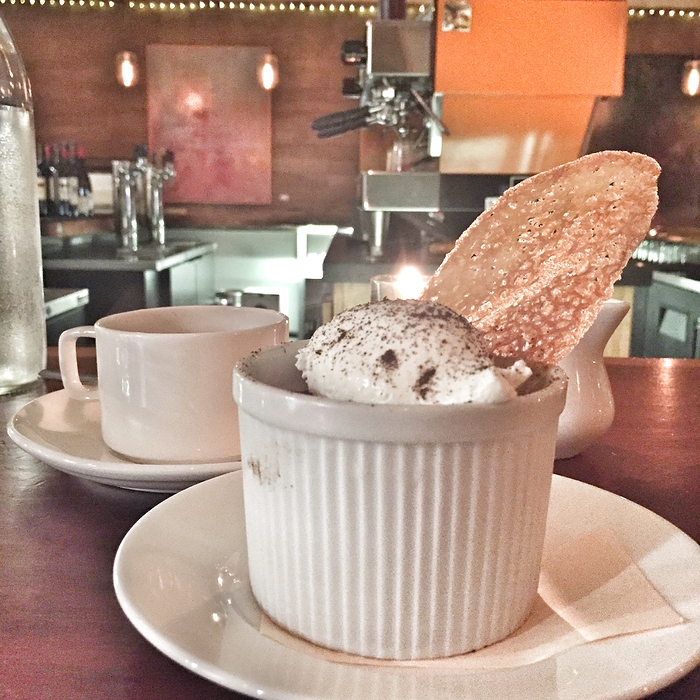 Just got back from Spinster Sisters. The aroma coming from the kitchen the minute I walked in was a very good sign. Sat at the bar. Very fun service. Ham hock terrine was a nice way to start, with pickled ramps and dressed arugula as accompanments. But these gnudi though. One of the best dishes I’ve had this heat. Perfectly formed, but the sauce! Great balance of tang, fat, and vegetal in every bite. Completely satisfying. Chocolate espresso pot de creme was maybe a bit heavy handed, but was a nice “not-too-sweet” to end the meal. Heavy, but I ate every bite. Thank you all for the recommendation. Very good call.

Glad you enjoyed it! Thx for the report back, too.

Just had “pre-dinner” at Ramen Gaijin in Sebastopol. Super cute place with a lot of open space. Had a few skewers to tide me over: 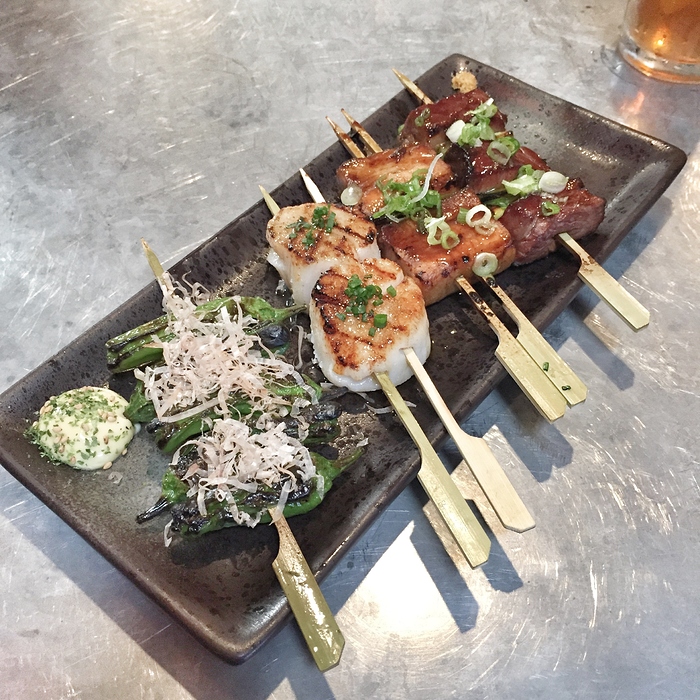 The best restaurant up there which we went to last time (covid trip) but was closed while we were there this time is Spinster Sisters.

But this time we had some tacos — Delicias Elenita, Freaking Tacos, and Las Palmas. I got al pastor at every spot, suadero at Elenita, cabeza at LP, while my gf gets al pastor and/or chicken. All were pretty good, norcal style al pastor. The suadero at Elenita was rose meat and while not my favorite suadero ever, I’d get it again. The cabeza at LP was ehh but the fresh tortillas were nice and being thicker worked. 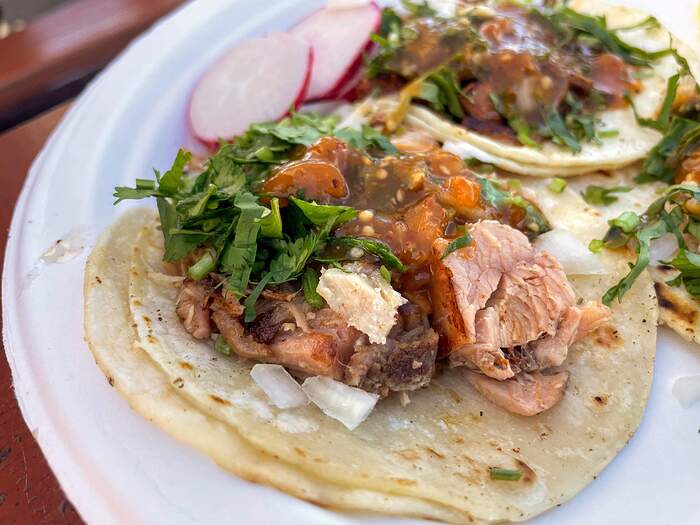 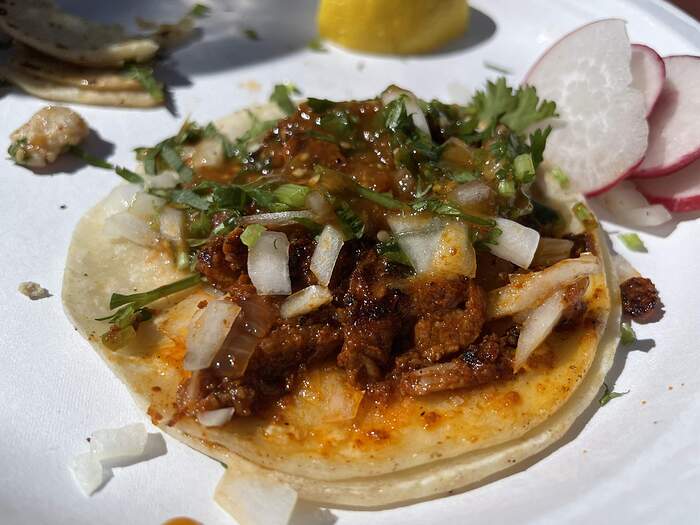 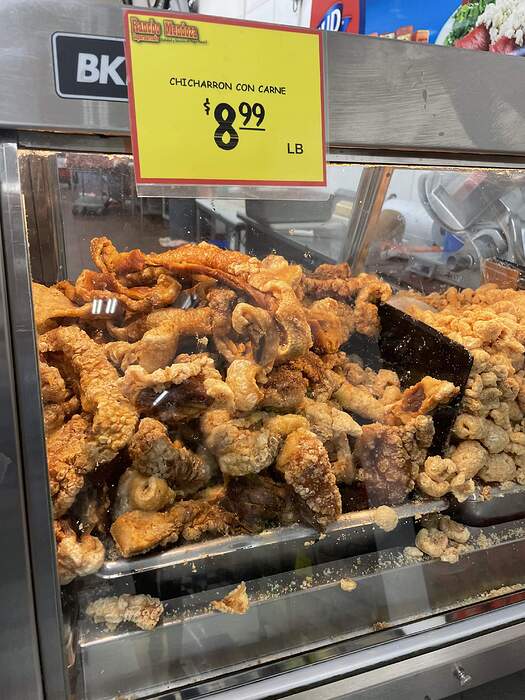 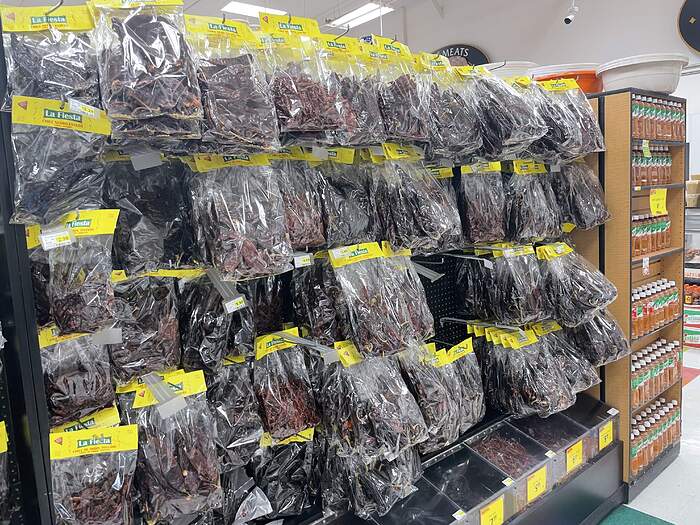 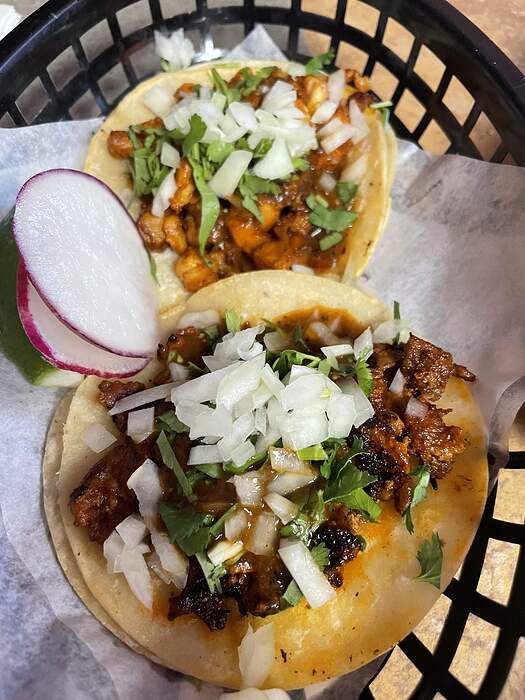 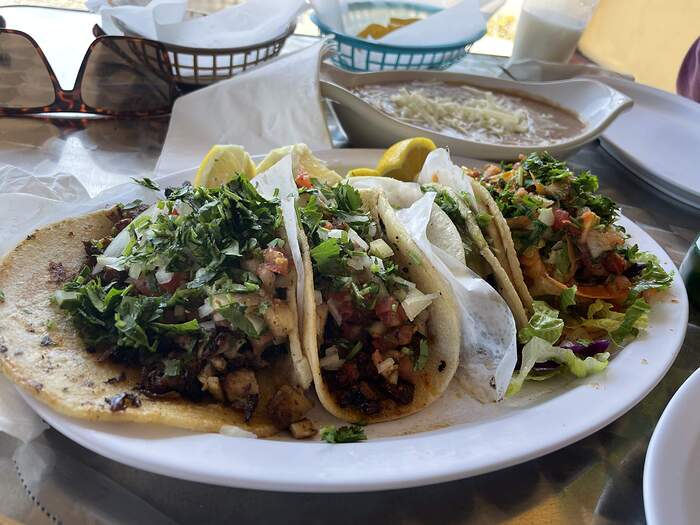 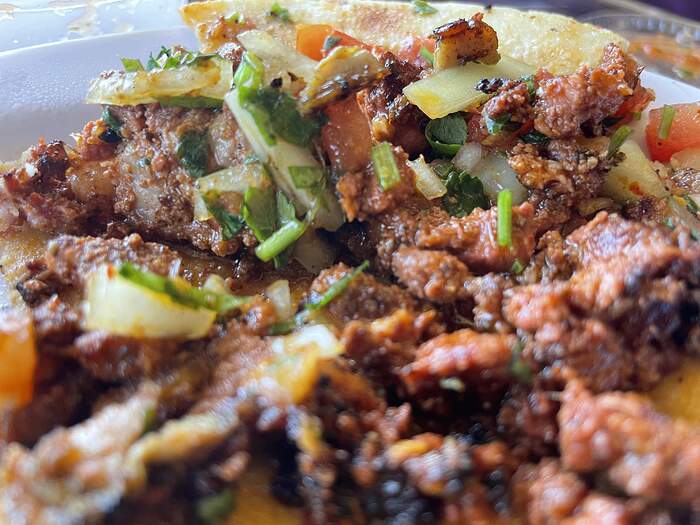 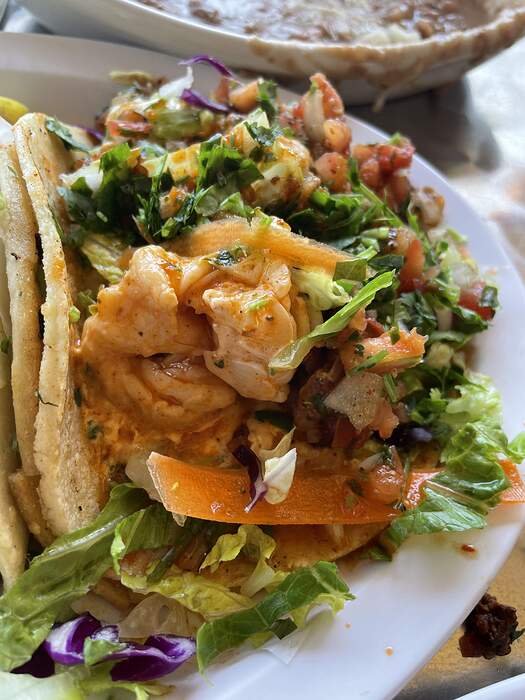 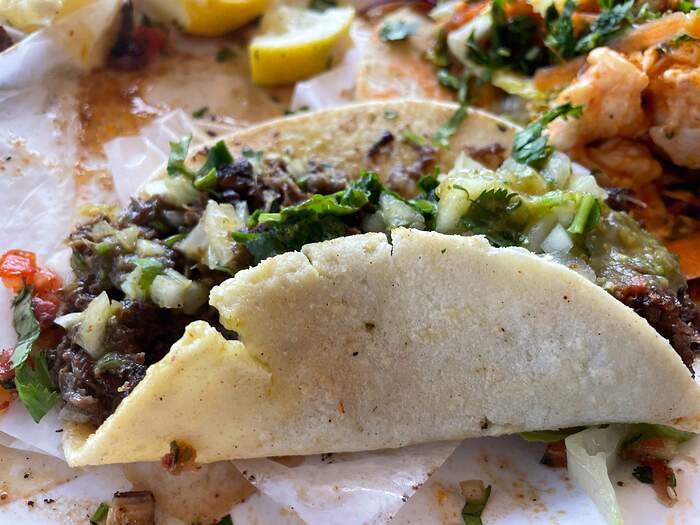 Oh, lol that’s actually an inside thing after this one taco crawl where a newbie kept asking why the al pastor was different than the pictures she had seen online and the taquero told her, “it’s norcal style” when he didn’t want to deal with her anymore. My friends and I still use it though just to mean the type that’s pre-sliced and held and then griddled (usually with a decent amount of juice/oil) before serving (as opposed to sliced straight from the trompo). And ya, it’s typically without pineapple.

But I’ve had that style in Tijuana (and other places in Mexico, and socal for that matter) so it’s not really correct but just what we call it sometimes. Sorry for the confusion, should have used a different descriptor that makes more sense/you don’t have to know to know.

I have eaten at ‘new willi’s’ and brird and bottle. Both are fine and i would visit again, but i would also try a different place for fun. Those are owned by the stark group. The memorable part of b & b was the vinegar shots.

The ‘norcal’ distinction is real, though. I like from the trompo if there is enough pineapple and a slice added, and enough spice, but often there isn’t (there was a truck at blue oak brewing in san carlos with a trompo, usual sins), and if you aren’t going to add enough spice and pineapple, i like the ‘twice cooked’ (aka norcal) style which is clearly braised and sliced long before, possibly not on a skewer, but reheated on a grill to order with a little bit of crunch. The spice mix is more forward and there is little pinapple taste, but you get the crunch.

I don’t think this is really a norcal thing, because la places do the same thing afaik. It is hard to keep up with a lunch or dinner rush and get the proper juicy bits off a single trompo, or even having a single trompo is hard to add to a kitchen. The famous places in the df have multiple trompos.

One place that rocks it old school is vallarta, mission, sf. Not norcal style.

There’s a million ways to skin a cat, etc.

I actually don’t like pineapple slices on my al pastor. In the marinade is enough. I ‘grew up’ eating tacos on the streets of TJ (they would do slice to order with a quick visit to the plancha with some oil) and there wasn’t pineapple in the taco itself, let alone what I see now in TJ and around here/LA advertised as “Tijuana Style” with huge amounts of guacamole and whatnot. But times change.

I don’t think this is really a norcal thing

Ya, I mentioned how I’ve had ‘norcal’ style in TJ, socal, other places in Mexico. It’s just what we call it after that line was said.

One place that rocks it old school is vallarta, mission, sf. Not norcal style.

I like Vallarta and have been going there regularly since I moved here (and actually just did a week or so ago). Not sure what you mean by old school though? Normal days they just have a sombrero style cooker with all their meats and on weekends (nights sometimes) they’ll have a trompo and do the pre-slice and keep on the plancha style.

How did I miss this thread!

Mexico Meat Market in Vacaville did/does it on the trompo, but I found a rubber band in mine once, and didn’t go back. For that, but I go for a lot of things.
Really interesting to read the various al pastor preps.

Willie Bird Restaurant reopened, in a new location, as “The Bird”. No longer that funky faux Tudor building. The turkey dinner was someone’s mom made it. If it’s as good as before, I’d go back.