A Different Kind of Koreatown 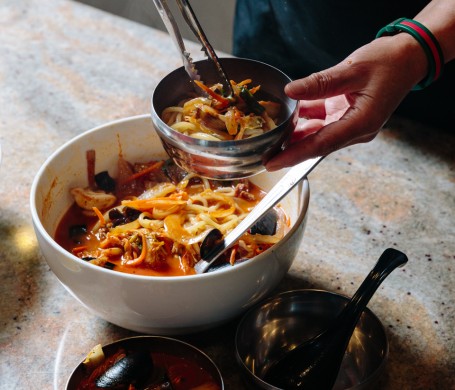 “It’s definitely the best in the Bay Area,” Cho says of Santa Clara’s wealth of Korean establishments. Really, the city is the only place in Northern California where you’ll find so many Korean restaurants devoted to a single dish or ingredient (say, Korean blood sausages), a whole economy of closet-size takeout operations hawking the boxed lunches known as dosirak, and not one, not two, but three gigantic Korean supermarkets. Spend a day exploring the city’s strip mall splendors, and you’ll see why the Korean food there is the food that Korean Americans themselves deem best.
…
At Jin’s Bakery & Coffee , for instance, you can order a sweet potato latte and a chewy tapioca-and-red-bean pancake and join the elderly Korean gentlemen who hang out on the café’s sunny wraparound porch. And if you want to delve into the world of traditional Korean rice cakes, there’s Ewha Dang Rice Bakery , a tiny shop (open only on weekday mornings and afternoons) whose selection of elegant, barely sweet treats includes steamed rice cakes, layered with pumpkin or assorted nuts and cut into thick slices, and mochi-like rice cakes filled with red bean paste. Jin’s Bakery & Coffee 2792 El Camino Real; EWHA Dang Rice Bakery 1076 Kiely Blvd.

Finally finished the article. I am so glad someone finally profiled Santa Clara’s Korea dining scene. Those strip malls are just so un-sexy that they pretty much are ignored completely by mainstream media.

Have to get some samgyetang soon. Just the right thing for this kind of weather. I am glad also the sweet potato cart got a mention too. And I am also glad that all these places other than Jang Su Jang got profiled. Whenever I asked people for Korean recs, inevitably Jang Su Jang came up as like the default answer. (Word is that Samsung workers from Korea go there often). I’ve always had adequate meals there but it never wowed.

I assigned and edited a piece on Sunnyvale a while back! Though it was an intern at the magazine who researched and wrote it rather than me.

Vietnamese in San Jose is a great idea!

Great, thanks! I think I missed that piece. I never thought of Sunnyvale as only South Indian. But thinking about it more, it is indeed pretty much South Indian…

Very well written article and covers some of the best items.

A few other gems which may be cover next time are JangTu, which specializes in Korean pork blood sausages, and the Food court inside Super Kyopo, which includes a very good Korean-Chinese spot, as well as a special stall that sells only 滷豬腳 Pork Hock, which is actually another Korean-Chinese introduced dish in the last 60 or so years that has found huge popularity in Korea.

One other shop worth mentioning is the traditional walnut pastry filled with red bean found at Cocohodo near Hankook Market. Made fresh daily with their special machines visible by customers. It smells as wonderful as it tastes and is a favorite snack for the young and old alike.

Have you tried Moo Bong Ri for their blood sausages?

Thanks for the Cocohodo rec- wasn’t even aware of the existence of the place.

Yes, MooBongRi is a chain from Korean which is focused on pork blood rice sausage, similar to JangTu. They have a different variety which is not seen at JangTu that is worth trying. I believe they now have a second bay area presence in Oakland as well.

I haven’t been to the Moo Bong Ri Korean Restaurant in Oakland yet but the reviews on ‘Y’ are almost universally positive especially for the soondae (pork blood sausage) and the beef short rib stew. It’s been open for a little over a year.

I forgot about “augustiner” who did a review of the soondae at Moo Bong Ri in Oakland about a year ago:

Went to moo bong ri in Oakland tonight. Seasonal blues and a hangover called out for soup. Koreans have a wide repertoire of healing soups but I’ve never had sundae guk before tonight (or soon-dae. This ain’t no ice cream!). I ordered the spicy soup set which came with a side of mostly sweet potato starch noodle stuffed blood sausage and two pieces of pork sausage and a pile of…offal? Condiments include saeujot, or fermented briny baby shrimp, salt with chili flakes, green onions, ground perill…