What caught my eye about Totoro Ramen, is its name. Totoro, of course, is a fantasy animal created by the acclaimed film maker Hayao Miyazaki in the animation film My Neighbor Totoro. 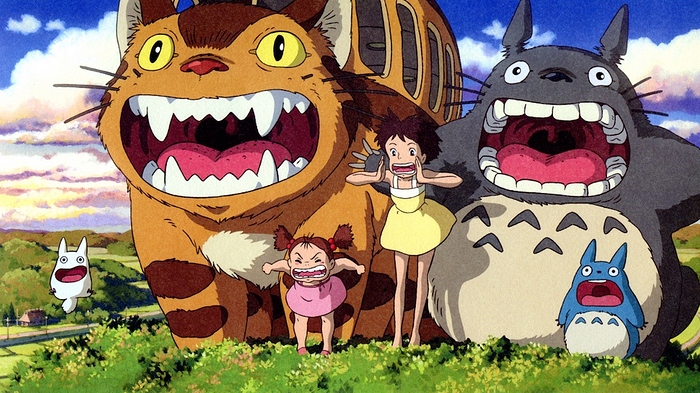 This San Mateo ramen shop has nothing to do with the film, but I was curious to try it out. Their menu circled the black garlic oil pork shoyu ramen as their most popular, so I got that. 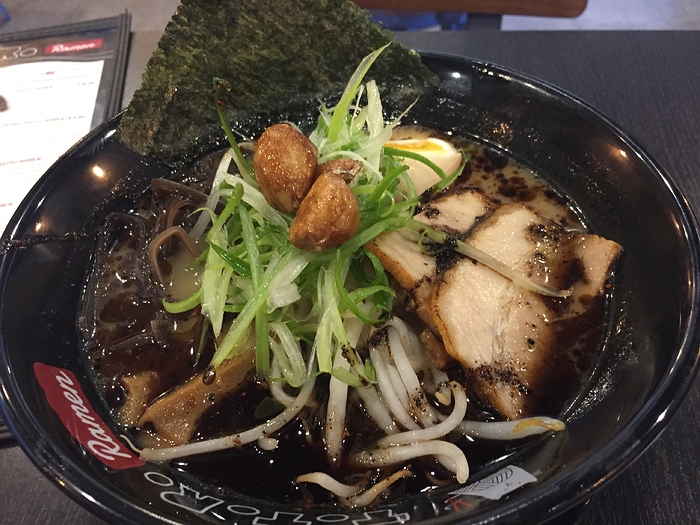 The noodles were thicker than other ramen joints. They came al dente and had a good mouth feel. The black garlic oil and the sauteed whole garlic added good aroma to the primarily shoyu broth, with some pork broth added. Came with a few slices of chashu, half a soft-boiled egg, kikurage (wood ear), bamboo shoots, bean sprout. Overall, pretty nice. Though some components- kikurage, bean sprouts and bamboo shoots- felt a bit disjointed and didn’t quite fit together with the overall bowl. So, locally around San Mateo, I think I like Dojo a bit more.

Was going to try miso but all the bowls looked to have the same components except for the broth.

Totoro has an iPad ordering system. Every table has one, and every counter seating space has one too (That has to get expensive with all these ipads…). 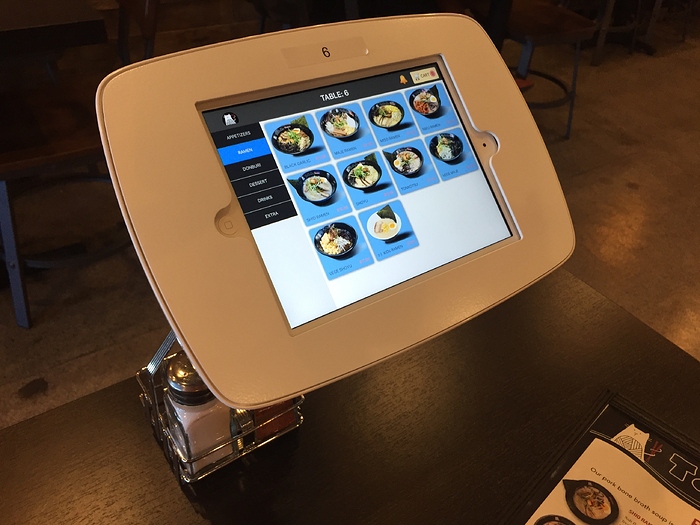 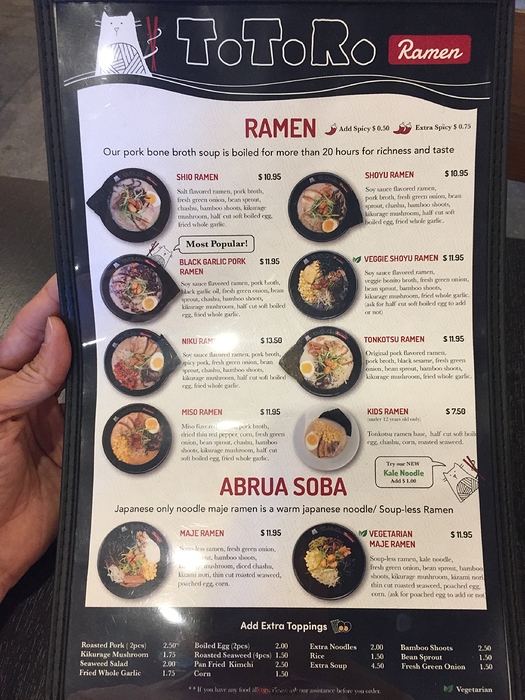 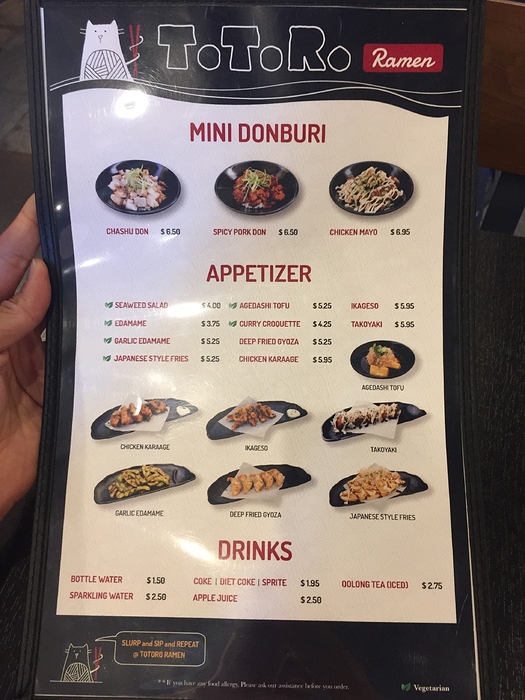 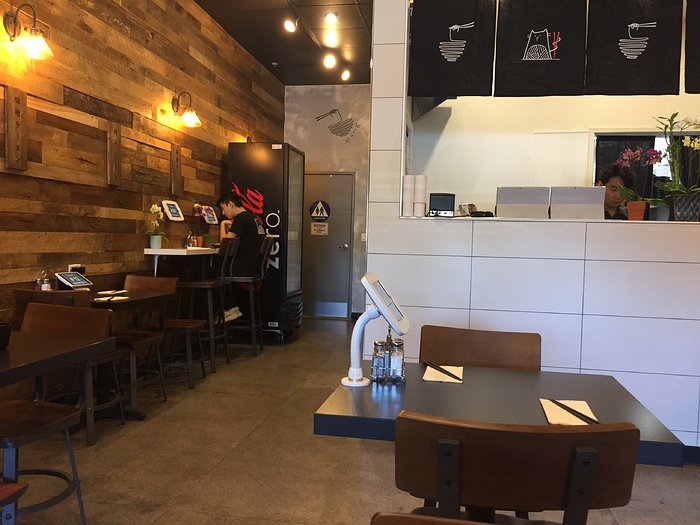 In the same mall as Safeway, so there is plenty of parking.

Wow. I saw the title and was drawn immediately. I’m disappointed to hear that it isn’t related to the Miyazaki masterpiece (though I think there’s a revenue opportunity in there; who could resist a nice bowl of black garlic oil pork shoyu ramen delivered in a disappearing nekobus?)

Are you sure that there isn’t a relation, though? I didn’t think Totoro was actually a word in Japanese; in the movie it’s explained as a mispronunciation of the word for “troll.” I can imagine how if they used the film as a design motif, they could get themselves in trouble with Disney or Studio Ghibli or someone, but the mascot certainly has a vaguely Totoro-like kitty-cat appearance.

Are you sure that there isn’t a relation, though?

Actually, I should say I think the shop has nothing to do with the film, since I never thought to ask that question. The gentleman who walked around looking like the owner looked Japanese, at least. I just assumed the shop and the film are not related because as you mentioned, the mascot, while it has some semblance of the totoro in the film, is definitely intentionally changed such that it doesn’t look entirely like it either.

Unrelated- I just switched to a totoro avatar myself, though I have nothing to do with either the shop, or Studio Ghibli.

The owner is Korean. The servers are young very polite Asians speaking with no Asian accent. I was wondering how he managed to snatch so many Asian servers in an area severely short on labor. Then I realized these are his sons! The black garlic tonkotsu is some of the best in the Bay Area; it’s that good. I really like how they really char the edge of the chashu slices. The less salty option is perfect for me. I even ordered extra broth to go ($4.50) 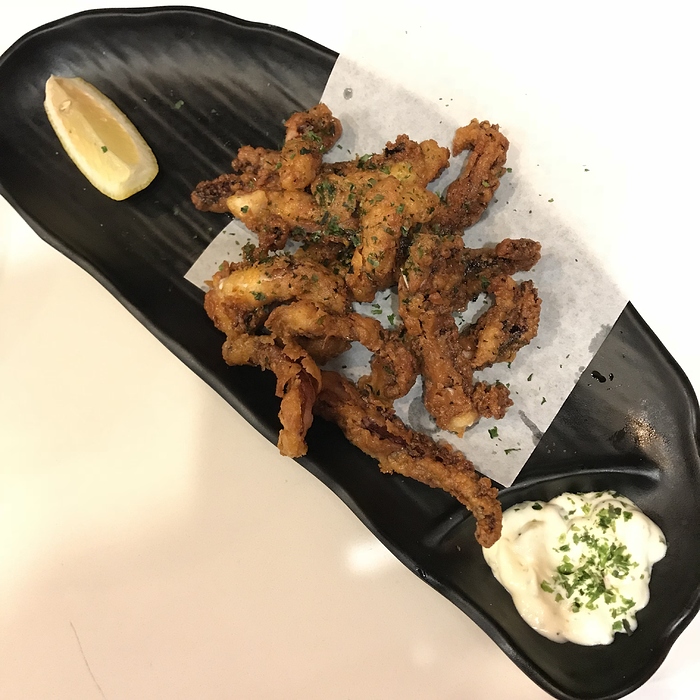 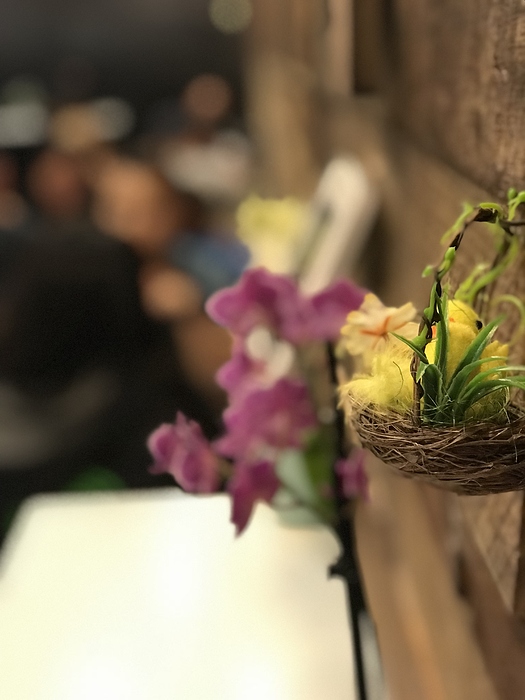 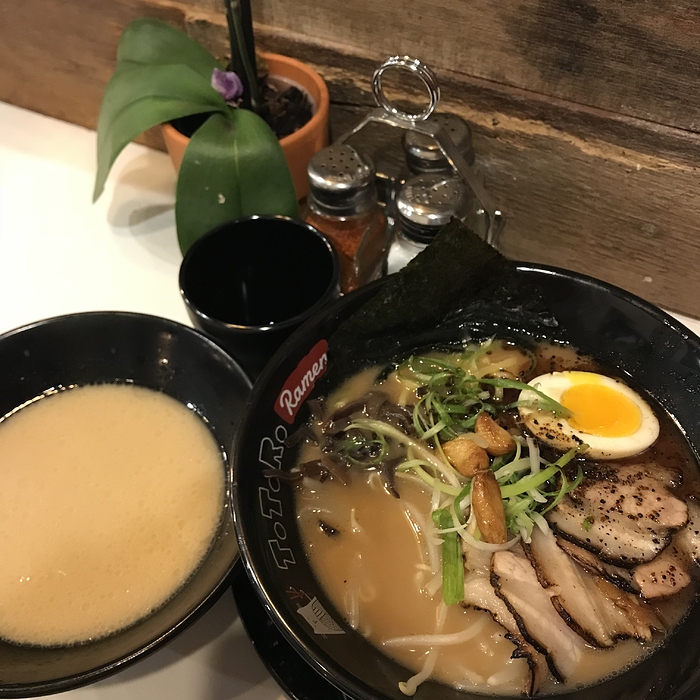 I went there twice since it opened. It’s a good solid option when you don’t want to be searching/paying for parking nor putting up with a wait at Ramen Dojo. In terms of the effort expended to eat there, Tontoro is a better value.

They also have takoyaki, which is okay. But at least it’s one of the rare places that have it in the area. The mochi I’m guessing is the Mikawaya brand that you get at the supermaket. That’s fine too, because I actually like that.

I went there twice since it opened. It’s a good solid option when you don’t want to be searching/paying for parking nor putting up with a wait at Ramen Dojo.

There’s some chatter that Dojo went downhill in the past year or so. I have not been there in this time period. Do you feel so?

I though it was solid. I don’t know what it tasted like last year though so I have no context to make that comparison.

I don’t see/taste any downgrade from Ramen Dojo. They said they have been making more broth so they don’t run out (one time it was like at 8pm!).