Its pretty hard for a Vietnamese restaurant to stand out in the very crowded San Jose Vietnamese food scene when the city has so many restaurants serving food from several broad categories- pho, bun bo hue, com tam, banh mi, lau. What caught my eye about Vit Dong Que was the fact that they specialize in duck (vit), and its a restaurant serving food from Huế, in Central Vietnam. 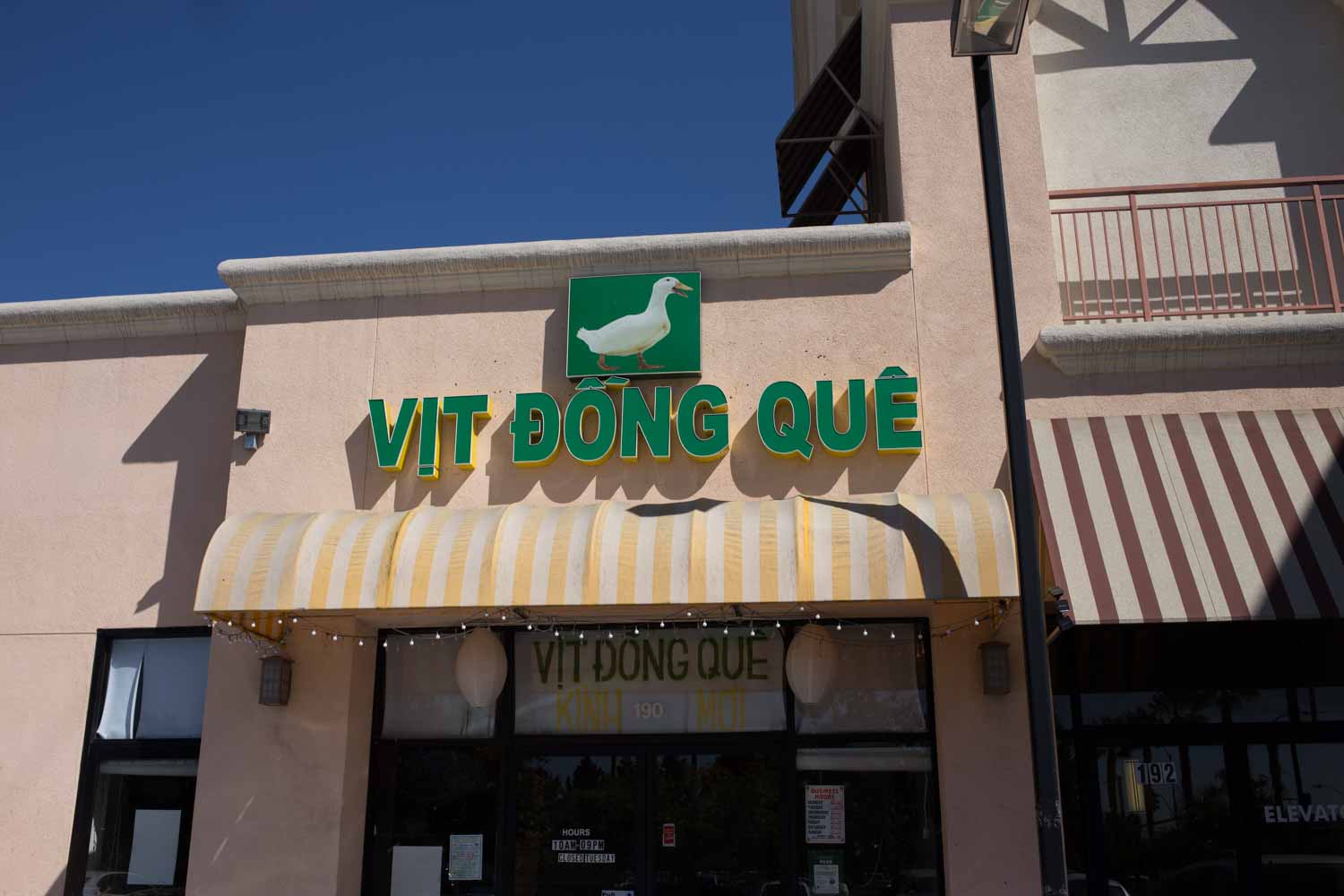 I tried the bun mang vit (A1), duck and bamboo shoot with vermicelli noodle. Pretty good noodle with a good flavored broth. 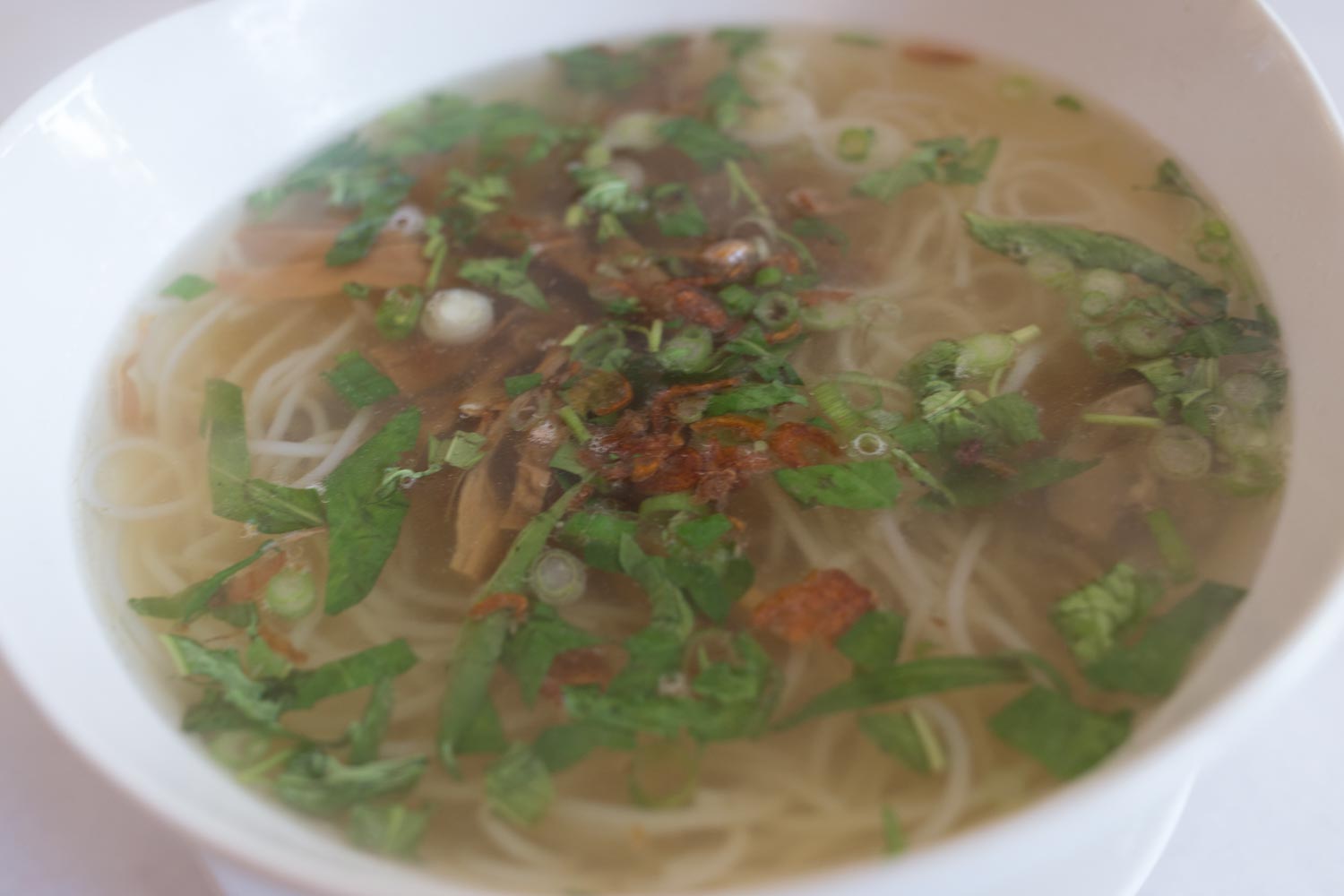 The duck is served on the side. Plainly poached, though ducks’ flavor is generally deeper than chickens’, with rau ram (Vietnamese coriander) for seasoning. 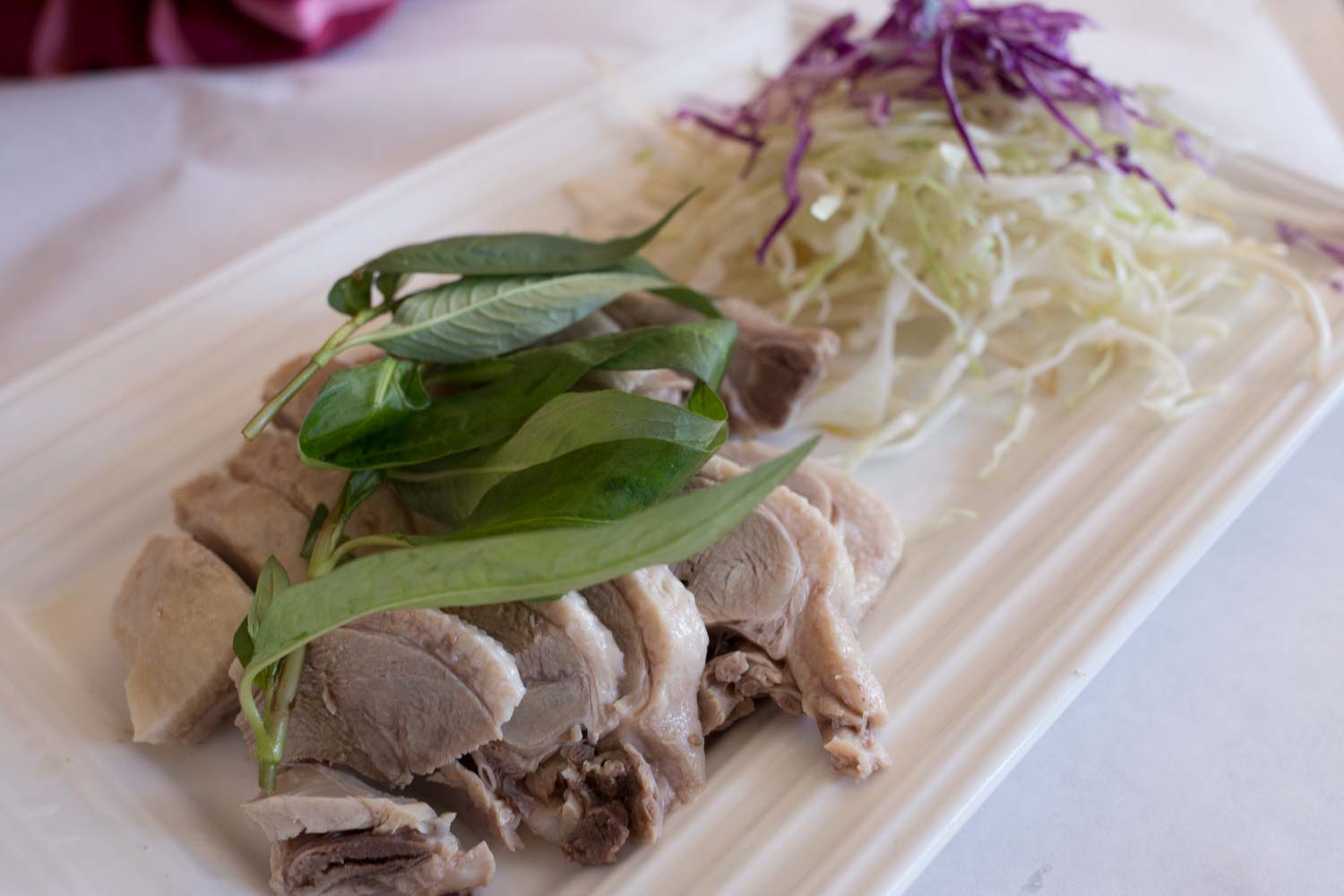 Chao goi vit (A9)- duck porridge with duck salad. The porridge had a flavorful base with some fried garlic and shredded herbs sprinkled on top. It had the innards of the duck underneath- kidney, gizzard. Pretty good. 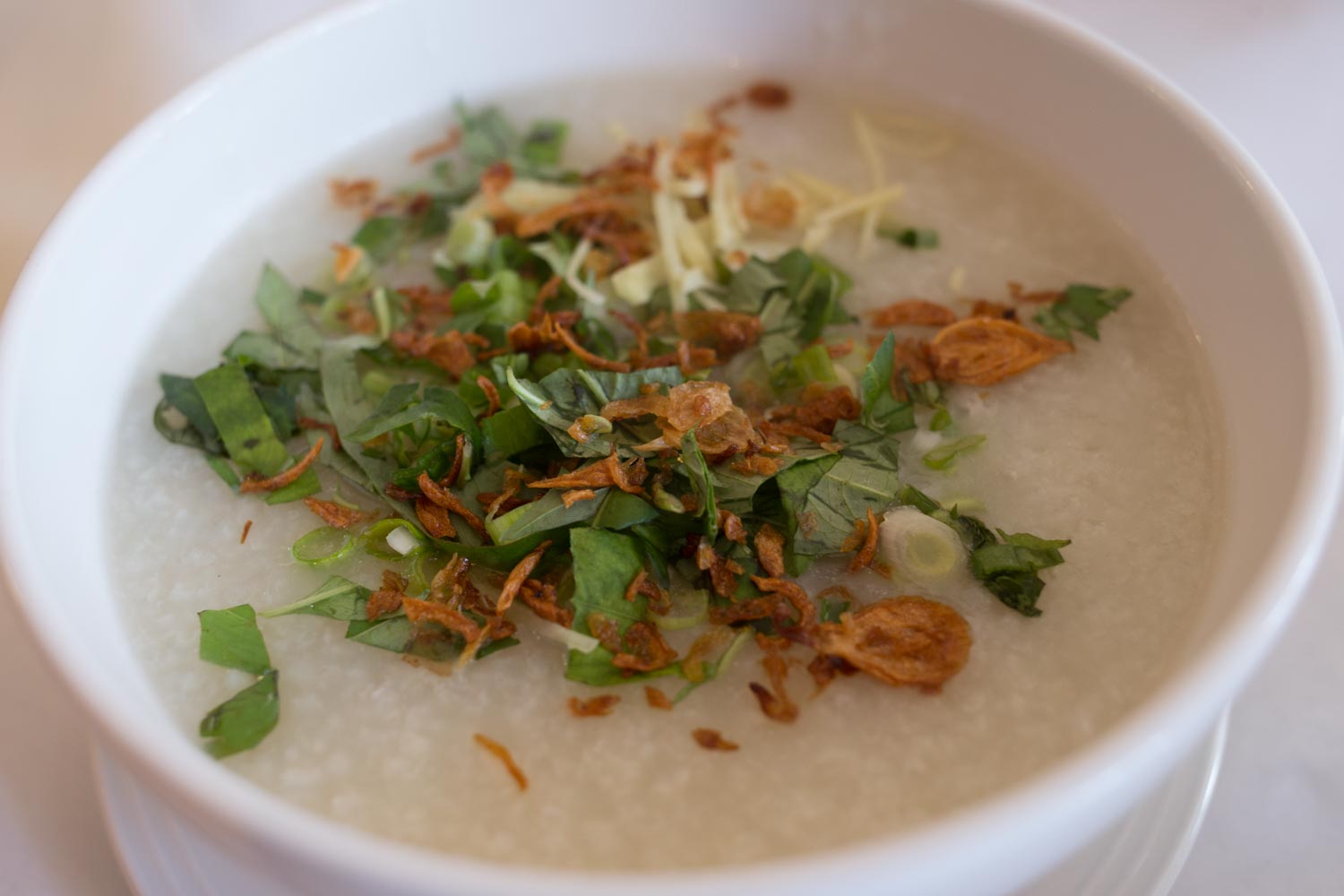 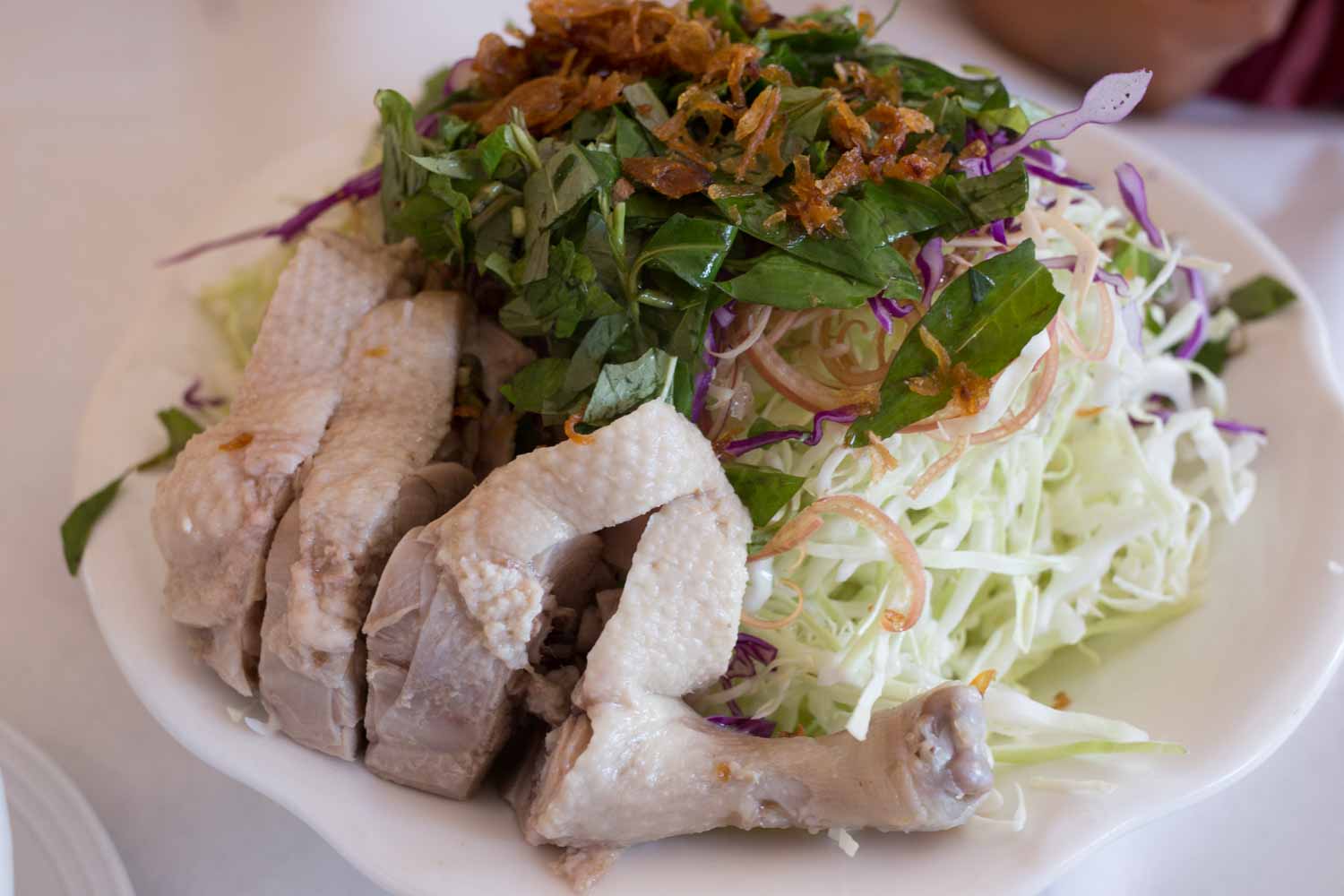 Bun bo hue. The restaurant wasn’t very busy during the weekday lunch. So I had a chance to talk with the owner about their bun bo hue. He said that he simmered the bones for 12 hours to obtain the broth. He said that he’s from Hue and recreated the proper flavor profile of a Bun Bo Hue. I mentioned the popular and nearby An Nam. He responded that the owners of An Nam were from southern Vietnam and their bun bo hue was not a rendition that reflected how bun bo hue was done in Hue. He proceeded to also discuss how different herbs were used in different Vietnamese noodle soup to create a flavor and heat balance. Duck (a warming meat)- rau ram (a cool herb). Use the ‘wrong’ herb, and the noodle soup would not taste right. The concept of heat balance is common in Asian cooking, though it can be a rather foreign concept in Western cooking. He also said pho used basil. Bun bo hue used mint, etc. Though sometimes I notice a number of these are used in a single bowl of pho.

The bun bo hue at Vit Dong Que definitely tasted different, and came with crab/ shrimp ball, beef tendon, blood cubes, beef, etc. and plenty of mint, cabbage to stir into the soup. The broth tasted slightly hot and a more herbal/ floral. To this eater from outside of Hue, I prefer the An Nam version. 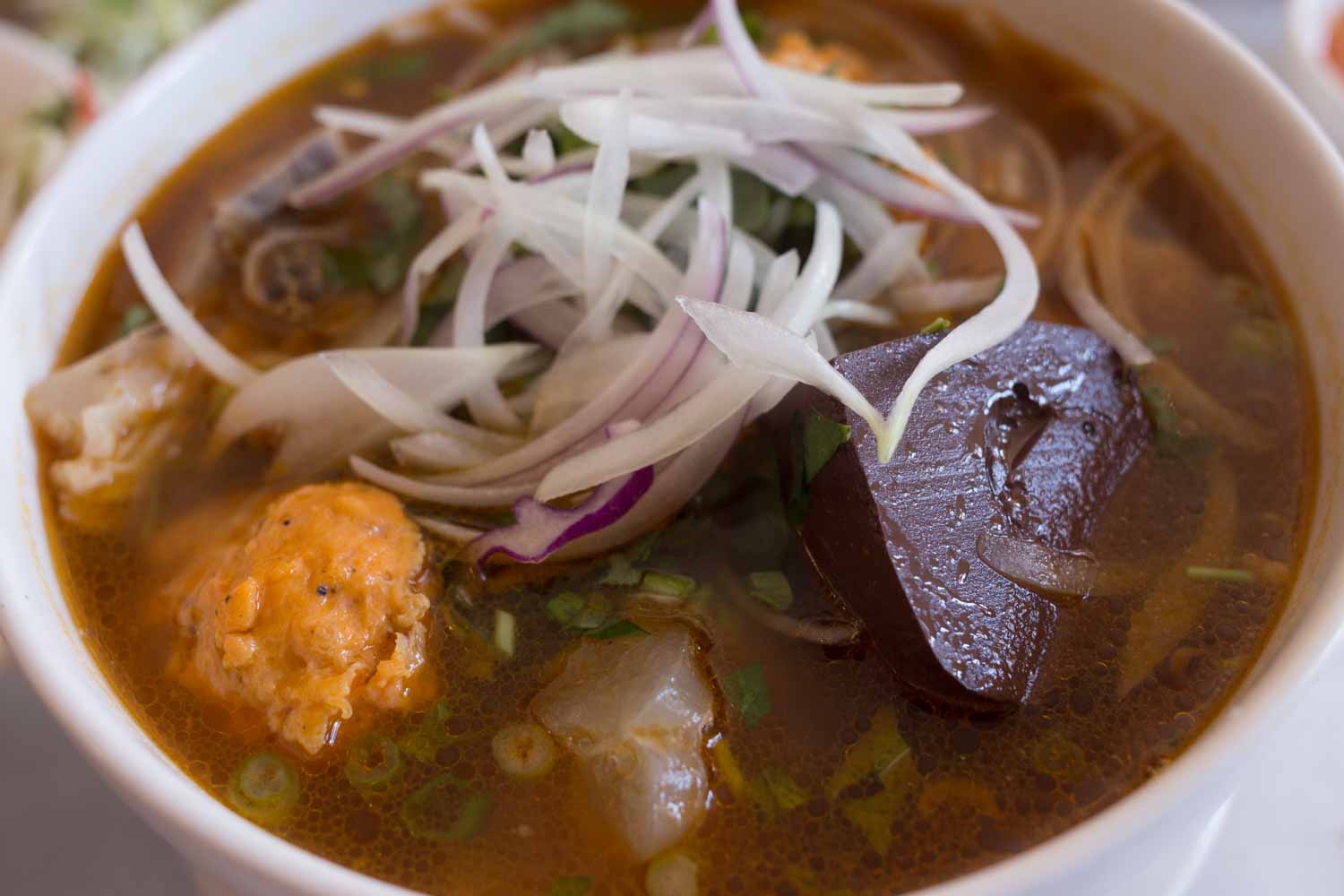 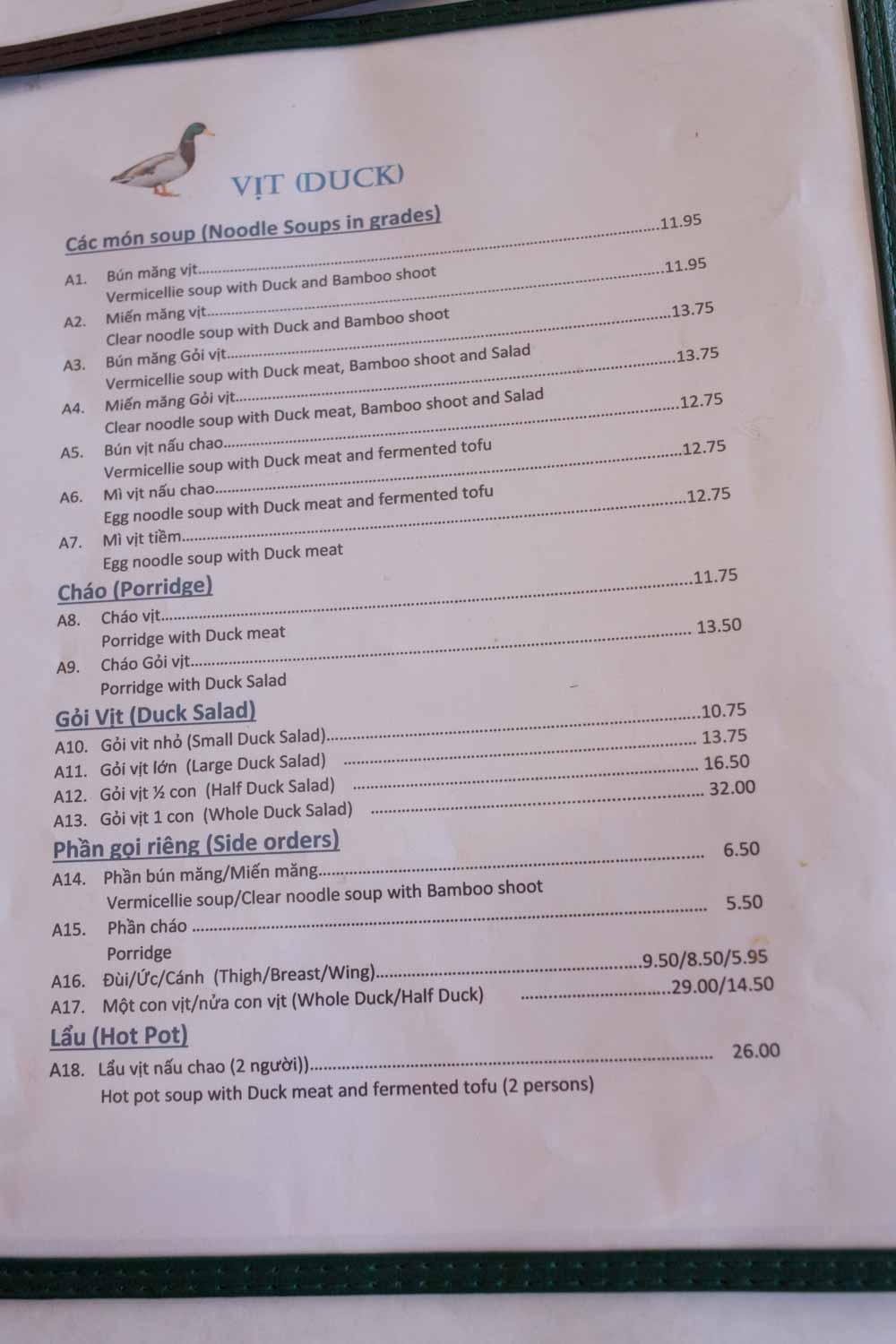 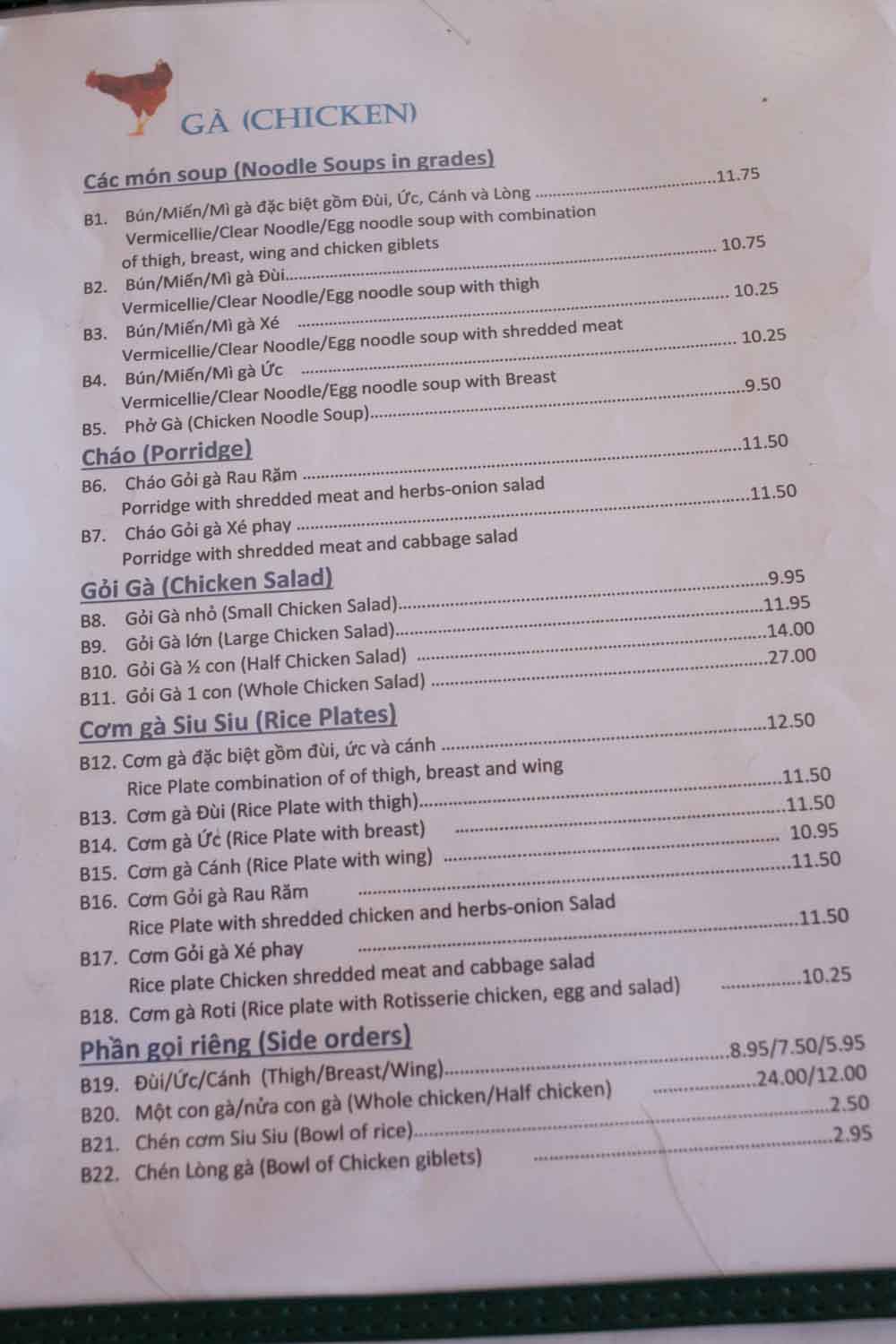 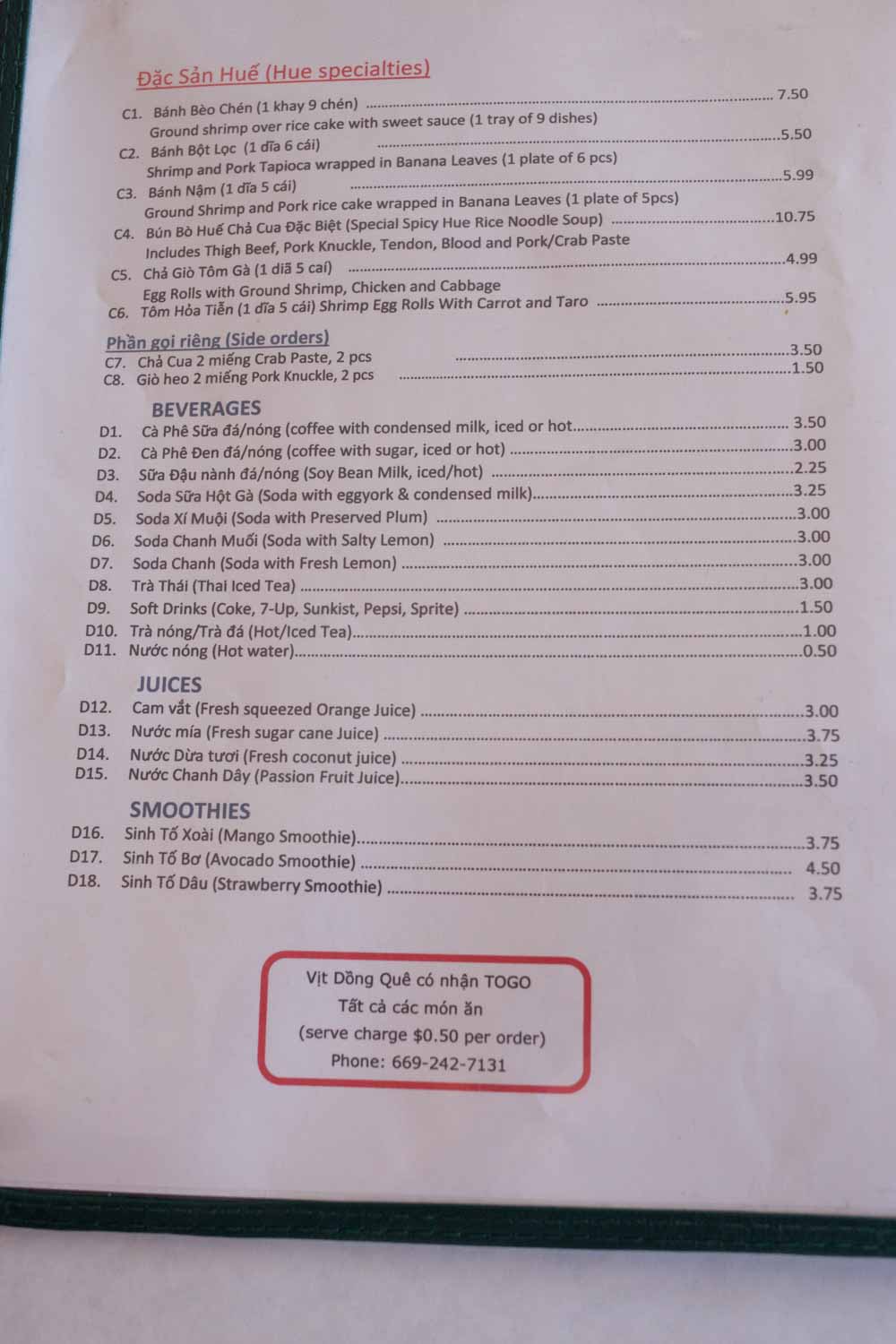 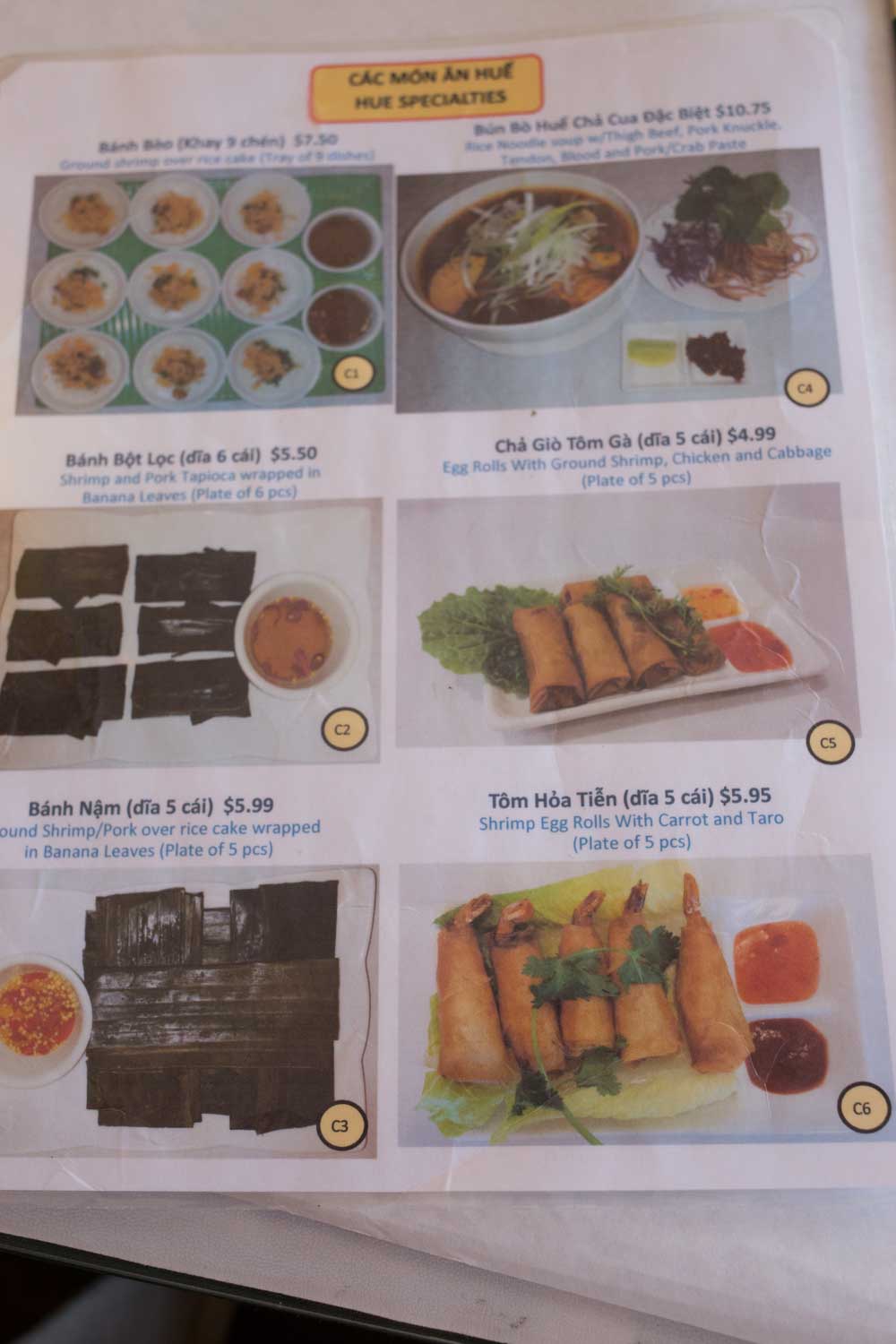 Side effect- drank water all afternoon…

Good review. Thanks for sharing. Pictures of the menu were very helpful. I don’t fancy any of the duck dishes you ordered but I would be curious to try the Hue specialties. I would never have known that they had Hue specialties or that the owners were from Hue if I just drove by. It’s also good to see that there are still places serving old school drinks like “soda with egg yolk & condensed milk”.

dishes you ordered but I would be curious to try the Hue specialties. I would never have known that they had Hue specialties or that the owners were from Hue if I just drove by. It’s also good to see that there are still places serving old school drinks like “soda with egg yolk & condensed milk”.

Had I known that there would be such a big overlap in ingredients, cooking method, taste amongst the 3 dishes I ordered, I would have skipped some duck dishes and got some Hue specialities. If you ever go try, do share what you think.

Are there any restaurants around there that serve Hue specialties or are from Hue?

The longest-running Hue specialty restaurant I can think of is the one on Senter Rd. They have been there for ages and (as far as I knew) used to be the only ones in town that served banh beo in the little individual dishes they were cooked in.

Since then, many other restaurants have joined in the game. Bun Bo Hue An Nam which has grown and opened up a second location. Hue Restaurant is a relative new-comer (2007 I think).

I haven’t eaten at any of them in over a decade so I can’t vouch for their quality. My favorite of all the little imperial treats that came from Hue is Banh Ram It. A steamed mochi dumpling filled with minced pork and shrimp and then put on top of another crispy fried piece of mochi dough. Crunchy, chewy, yummy! The ratio of steamed dumpling to fried dumpling has to be right though otherwise it can be too chewy, too oily, etc. 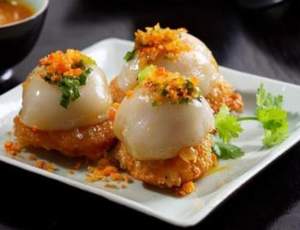 Looks pretty delicate- any idea if any of them serve the Banh Ram It?

All three of them serve it. Photos from Yelp: 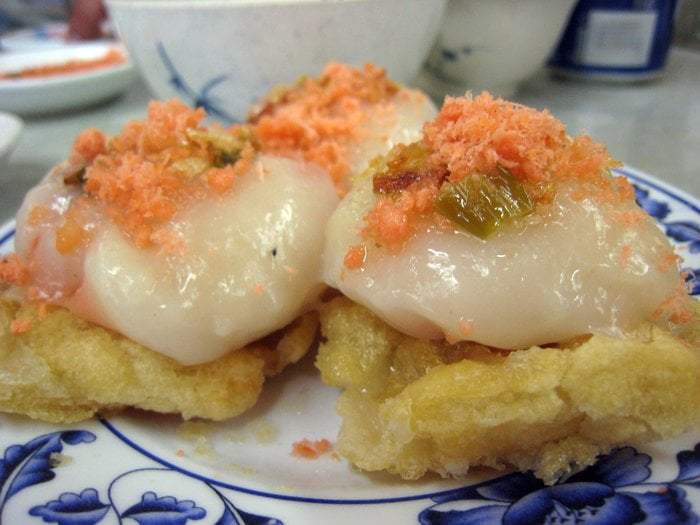 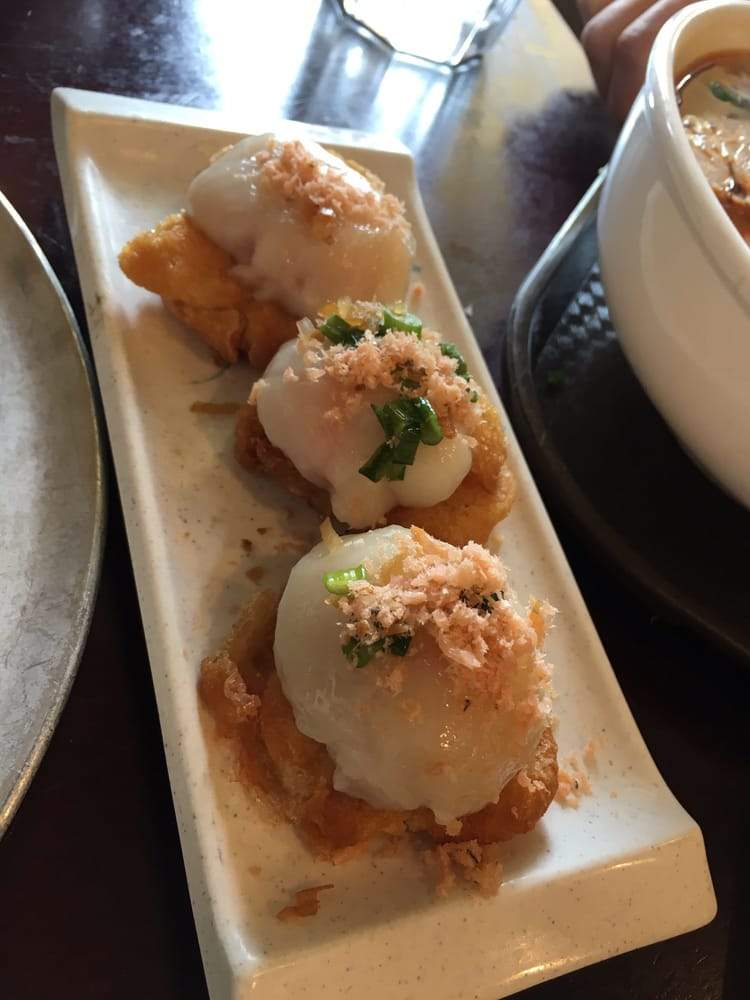 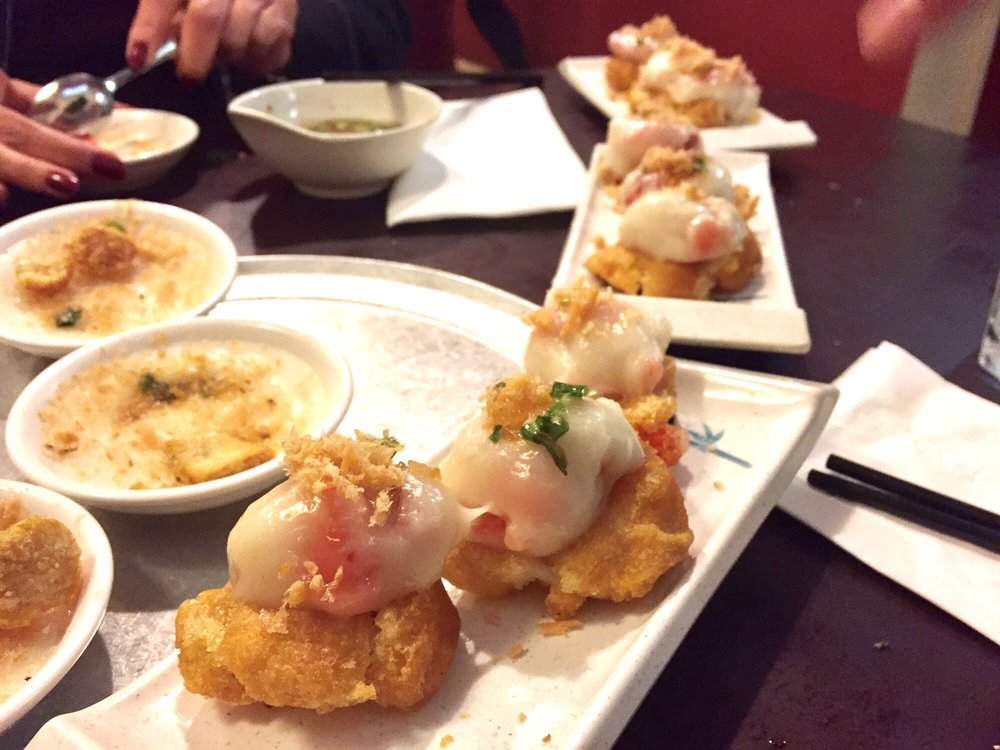 To me, the first one BBH (Senter Rd) looks the most appealing. The ratio of chewy to fried looks the best and the toasted shrimp powder / scallion oil topping looks tasty. Their banh beo looks good too. Here’s another yelp photo from that restaurant: 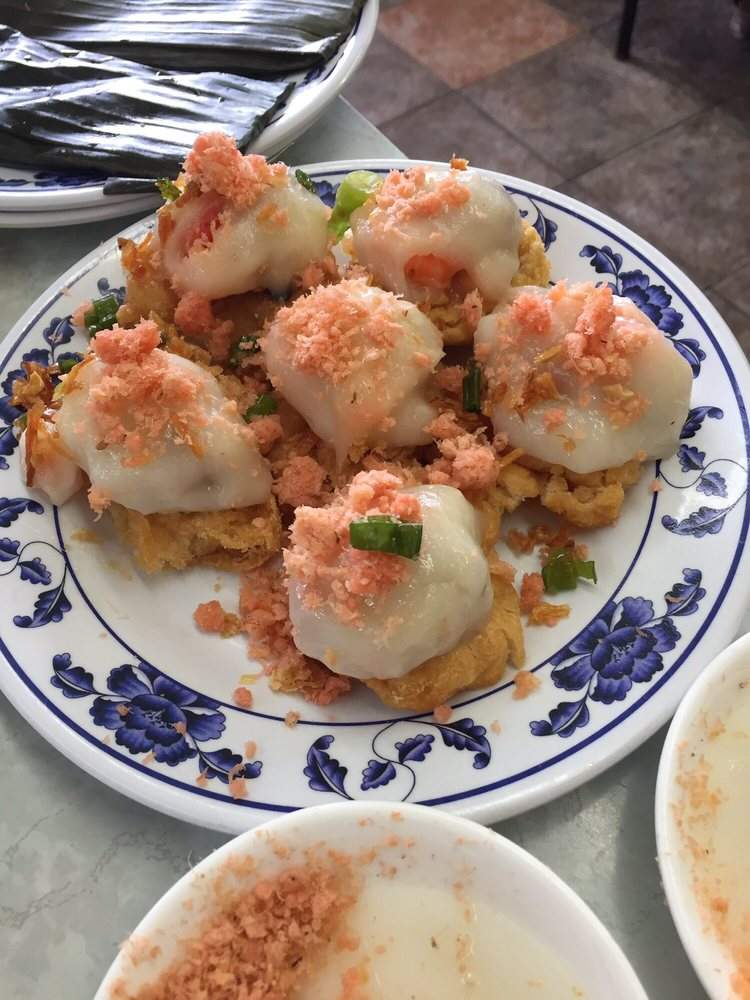 There is a Hue, Bun Bo place on Tully Road, close to Lion.

Bun Bo Hue An Nam 2, is this the same place referenced above?

BBH An Nam 2 on Tully Rd. is the sister restaurant of the original BBH An Nam on Story Rd.

Posting all these pictures got me craving this dish! I’ll have to visit San Jose soon!

So I got curious about the restaurants serving food from Hue in the Bay Area. Looks like there are at least one more Hue specialist.

Then I came across Hue Xua on Yelp, near downtown. Interesting profile. Been there since at least 2010, and only 5 reviews?! Did a little more digging. Looked like its a front for an already shuttered coffeeshop. Ooops.

I suppose there isn’t anybody serving the imperial cuisine from Hue?

Nice sleuthing. I am aware of Quan Hue inside the Lion Plaza food court but did not mention them because they don’t serve many of the special little bites from the imperial city. And although I don’t know where their owners or cooks are from, the few little bite dishes they do serve seem more of a southern style. Here are the clues:

Banh khot - Their banh khot contains skin-on green mung beans and coconut milk? Unheard of in Hue and typical in the South. 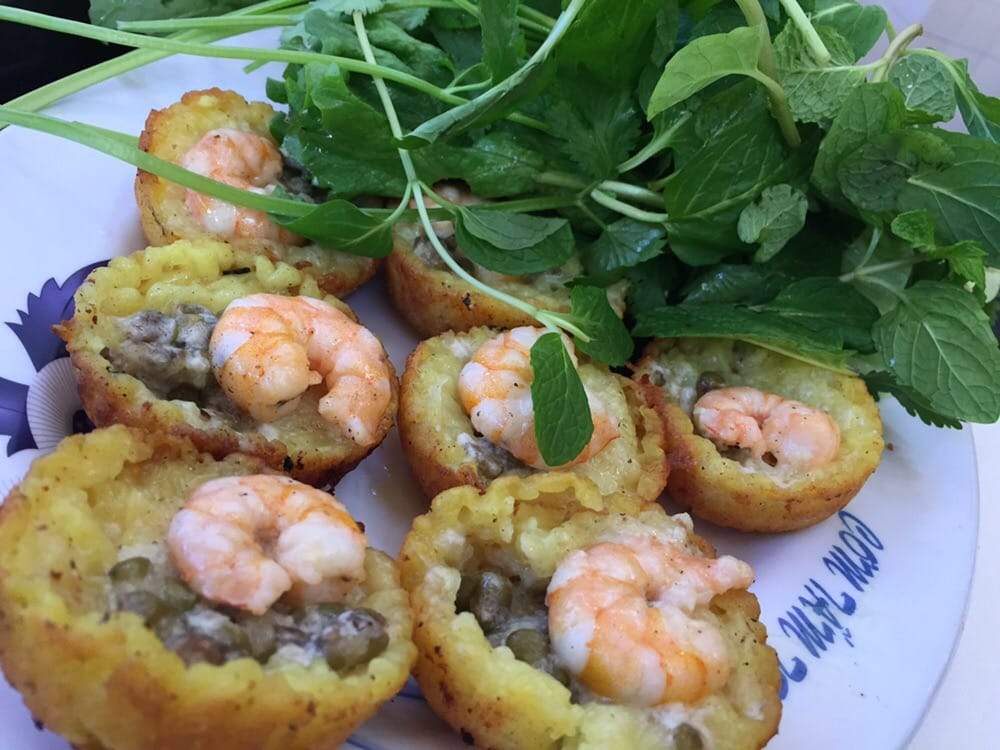 image.jpg1000×750 87.1 KB
In Hue they call the dish banh cang and they are typically broader, flatter, thinner. In Vietnam, they’ll often add a quail egg to each one. 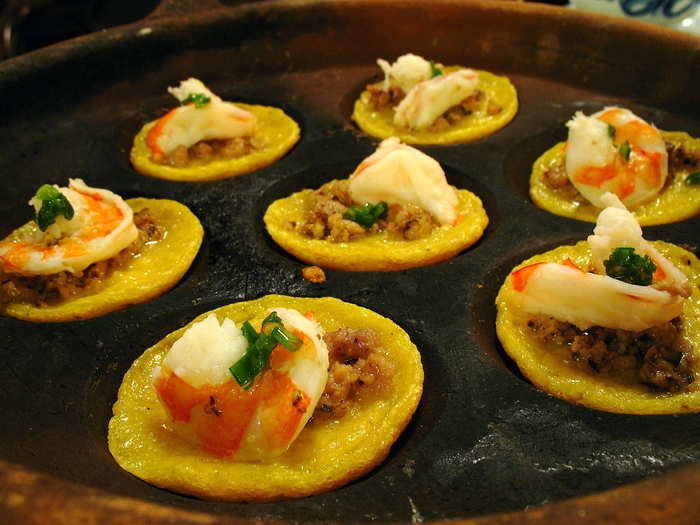 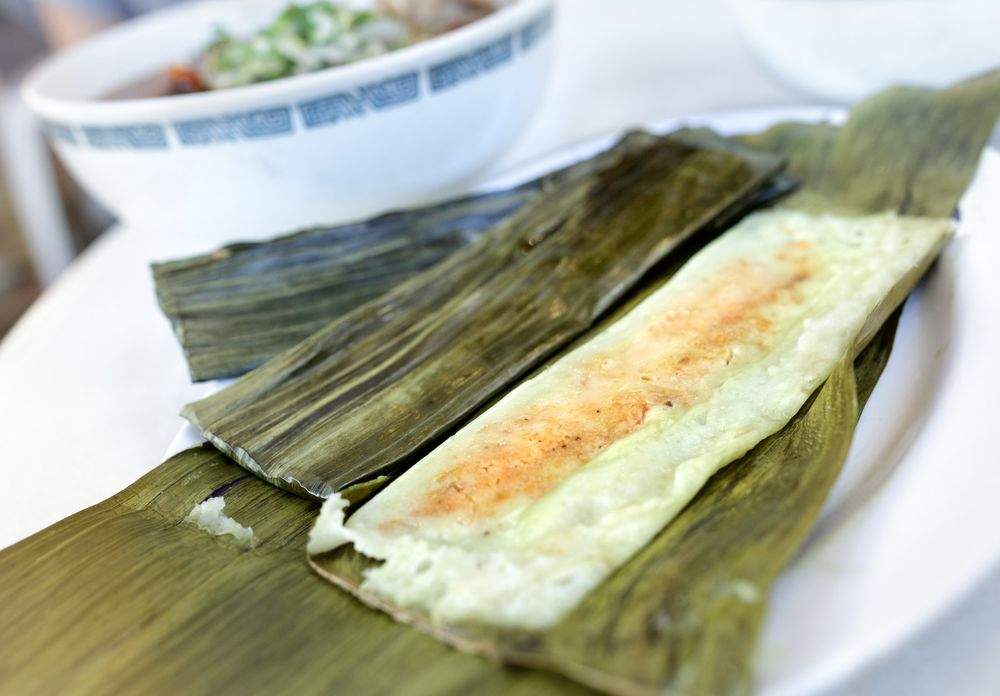 Perhaps they are using the more commonly known Southern terms but the Hue versions are a distinctly different style with different names. Their banh xeo is a typicall large plate sized one. I don’t know if it contains mung beans but that is southern. In Hue, people enjoy multiple small ones about hand sized.

All these dishes originated as small delicate specialties originally created to please the lords and emperors. Legend has it that one emperor demanded a different dish every day for a year which is how the Hue cuisine of delicate small bites emerged.

Good to know! I don’t know why then they try to pass themselves off as a Hue restaurant when they are not. Do people outside of central Vietnam enjoys food from Hue? 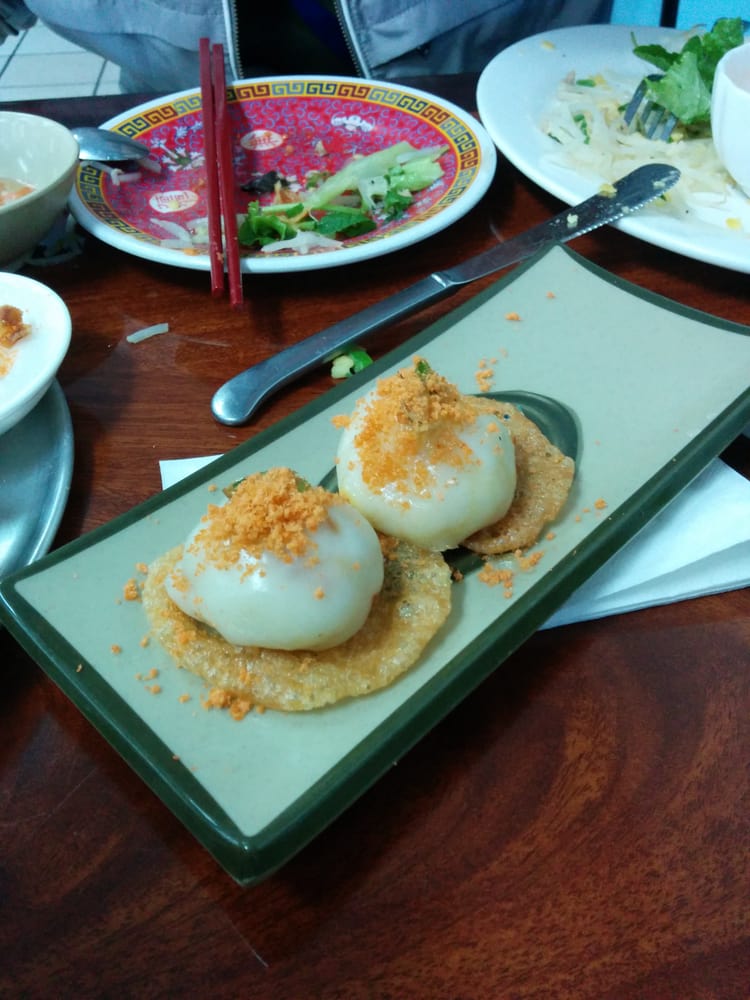 People, including some from Hue, are pretty mixed about their Hue dishes like Banh Beo, Banh Nam, and Banh Ram It.

Interestingly there just don’t seem to be many Hue restaurants around here, not counting those serving an occasional Hue dish like BBH. Hue is a small city, I am guessing not many of them immigrated to the Bay Area?