I dropped into Lapats to try their Pad Thai. Wasn’t ketchupy, but was still too sweet, and the pork (comes with your choice of protein) was too chewy. As a solo diner, was seated at a high ledge at the window, with not the most appetizing of views. Might return for some of the more interesting soups, but it sounds as if there are now competing options nearby…

I went to Lapats and tried the kuay tiew nuer num tok ($10.95), which are boat noodles according to the server. It was kind of disappointing unfortunately. The broth was a little thin, a little on the sweet side, and missing that slightly funky rich beef/pork blood element in the best boat noodles I’ve had. I much preferred the boat noodles from Zen Yai nearby.

You can get it with various types of egg and rice noodles. I ordered it with thin rice noodles, but it came with thick ho fun like noodles, which were pretty good anyway. The beef was cooked well and not overdone. It came topped additionally with some meatballs, tripe, bean sprouts, deep fried garlic, and some sort of pickled vegetable as well. It was missing pork cracklings, but they were pretty generous with the meat. I wish the broth were better though. 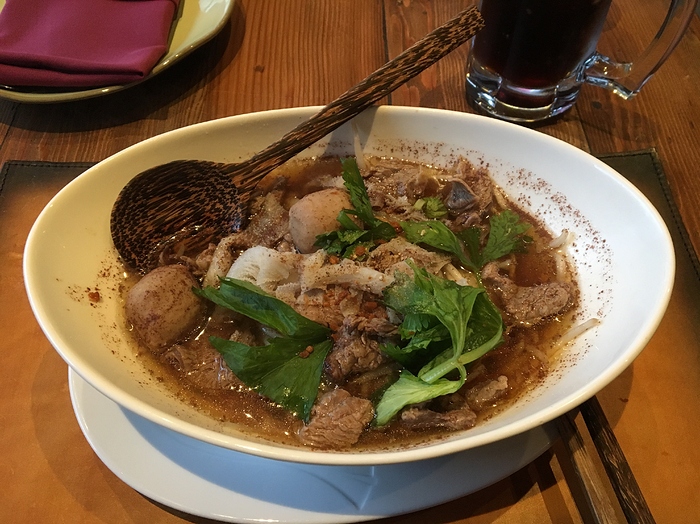 On another visit I had the ba mee kha moo ($10.95), described on the menu as “braised pork legs served with egg noodles, egg, beansprout, Chinese broccoli and chili vinegar sauce,” which I liked a lot better than the boat noodles. I thought this was going to be a noodle soup, but it was basically a khao kha moo (pork leg stew with rice) but with noodles instead of rice. The noodles were thin egg noodles that were cooked al dente, with a nice chew. The pork leg stew was nice and fatty and flavorful, with a good amount of unctuous pork skin. Not much in the way of sauce or gravy though. Minor quibbles - the broccoli was a little too crispy for my taste, and the boiled egg was cooked too long, with a dry yolk. I would get this again. 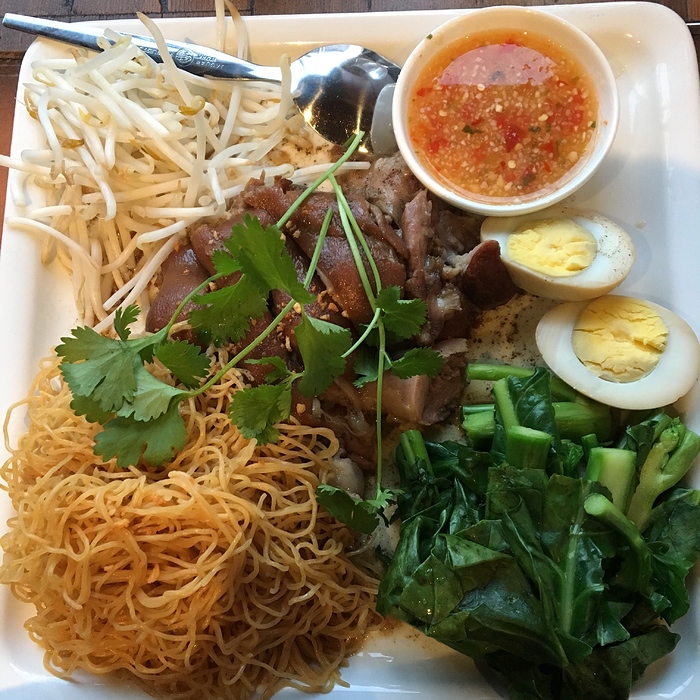 the boiled egg was cooked too long, with a dry yolk

I tend to think that this may be the usual way of hard boiling an egg in Asia. I am not saying its good or bad, but just seems to be fairly common.

I had dinner at Lapats and tried their Kuay Jub ($9.95). This dish was new to me, and is described on the menu as “Rolls rice noodles with pork entrails, crispy pork belly and boiled eggs in Thai herb soup.” It was pretty good. It had a nice slightly thick soup spiced with cracked peppercorns and other herbs, that was slightly sweet with a small layer of fat or oil on top. It had pork intestines, pork belly, a hard boiled egg, and liver. The pork belly had a nice crispy crackling, and the pork intestines were soft and had a slightly funky flavor that was expected, but was not overpowering. The noodles were wide rice noodles that were rolled into thick cigar sized rolls. I think they could have been a little springier, but then again I’ve never had this dish so I don’t know if that is the norm or not. Quite filling due to the substantial broth, thick noodles, and copious amount of meats. I would get this again.

I also had the “Green Dumplings” appetizer, which were large chive dumplings with a thickish rice wrapper, served with a sweet and slightly spicy thick black sauce. These were pretty good as well, but had a low QPR as at $11.95 they were more pricy than my noodles. 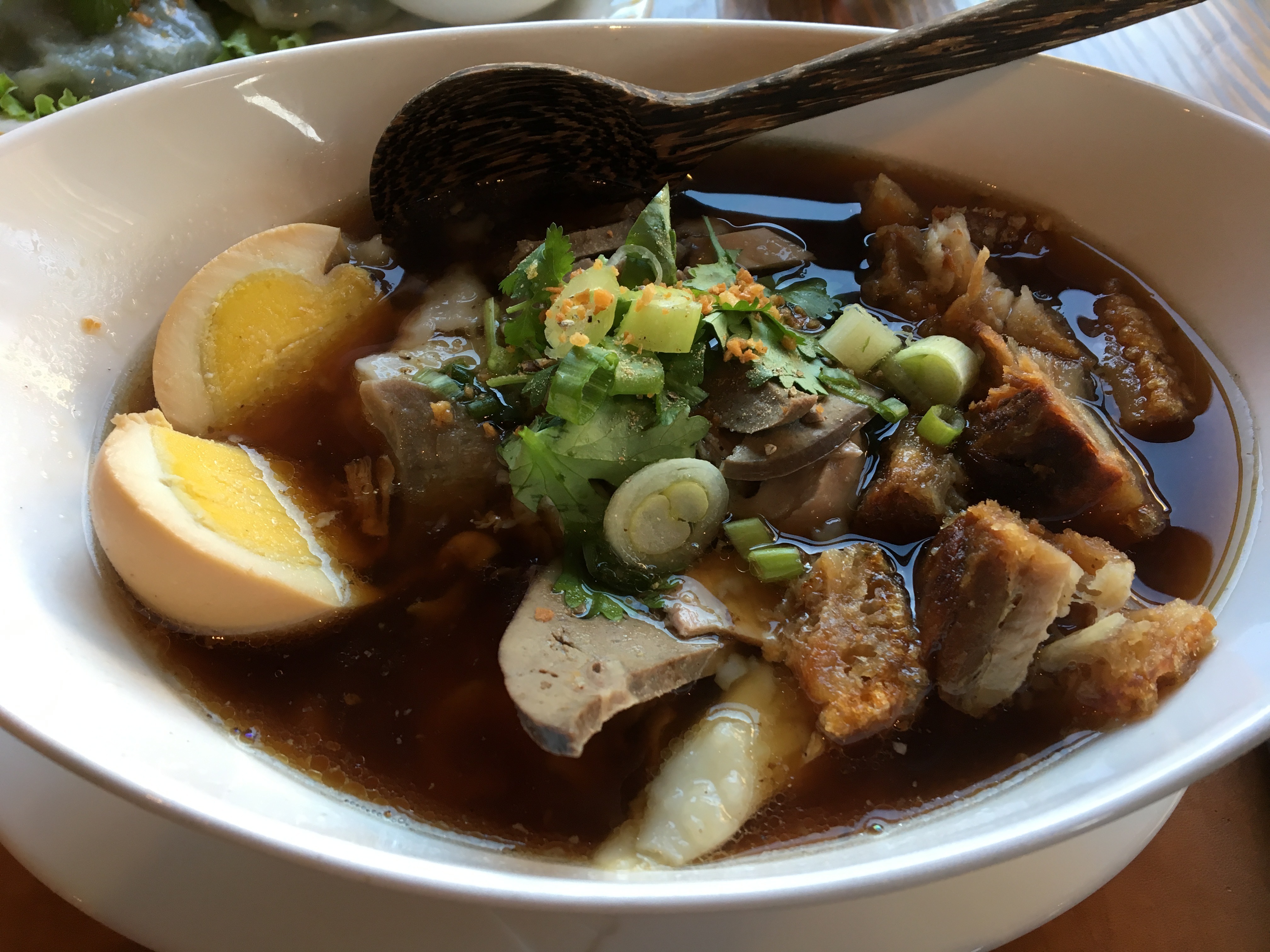 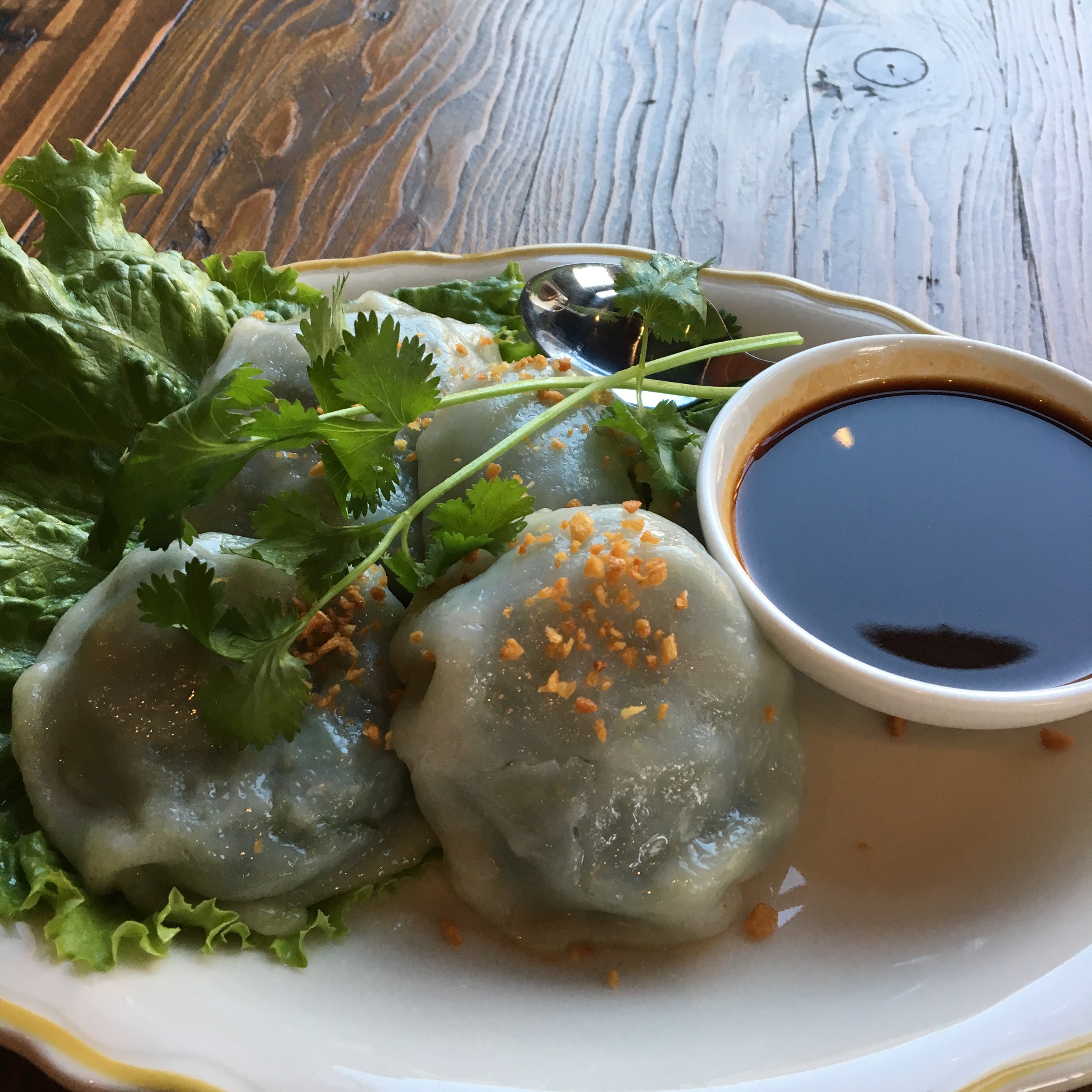 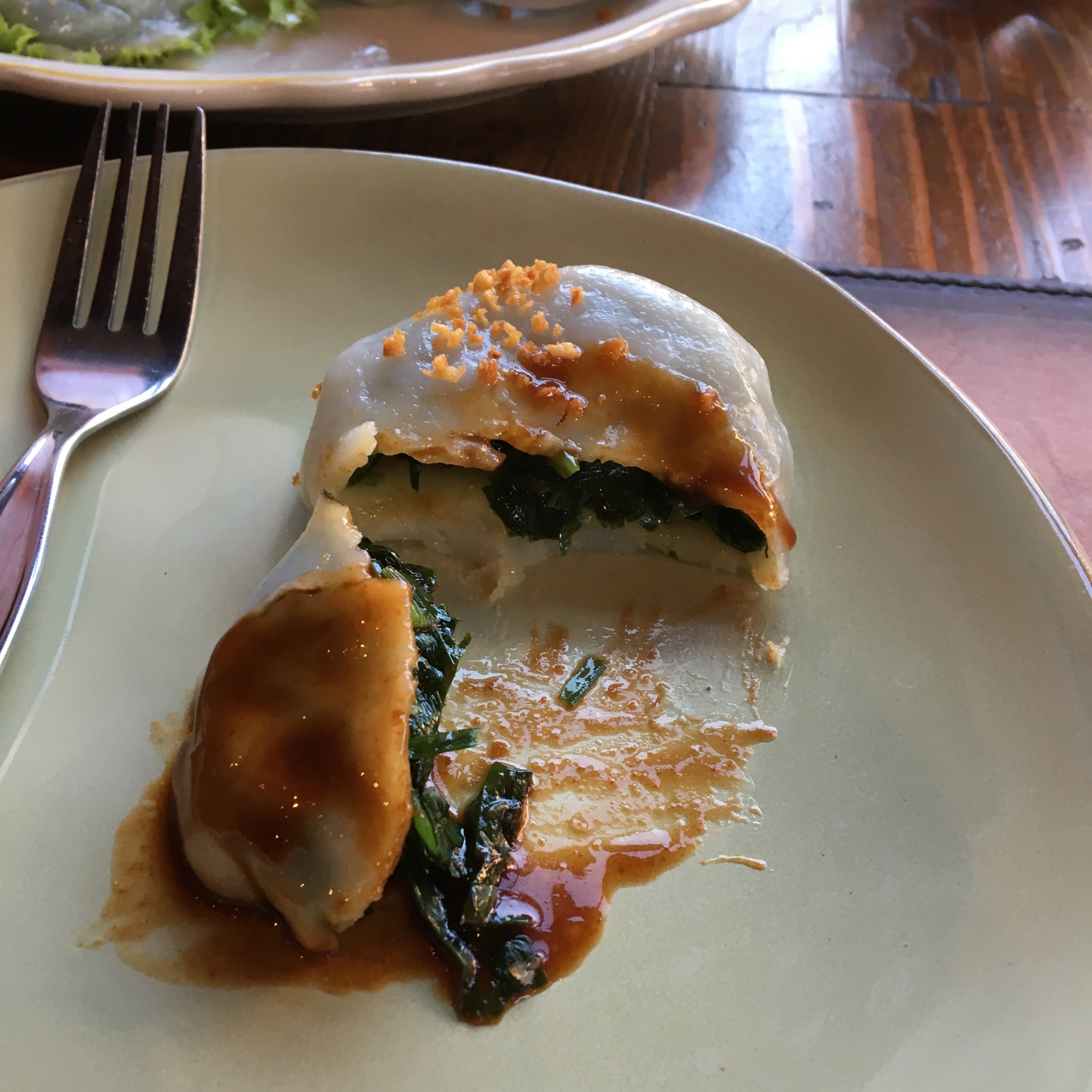 I had a bowl of the “Lapats’s Special Noodle” ($9.95), described on the menu as “Sliced Pork, Ground Pork And Fish Ball In House Special Pork Bone Soup.” This dish resembled the Vietnamese dish hu tieu nam vang, which also has a pork broth and similar toppings, but came without shrimp and had the addition of a smooth-textured pork patty on top. Maybe this is the Thai version.

It was good. Nice broth, maybe a little high in the noodles+toppings to broth ratio, although this may be typical in Thai noodle soups? With the number of hu tieu options in the general vicinity may not rush to have this again soon though. 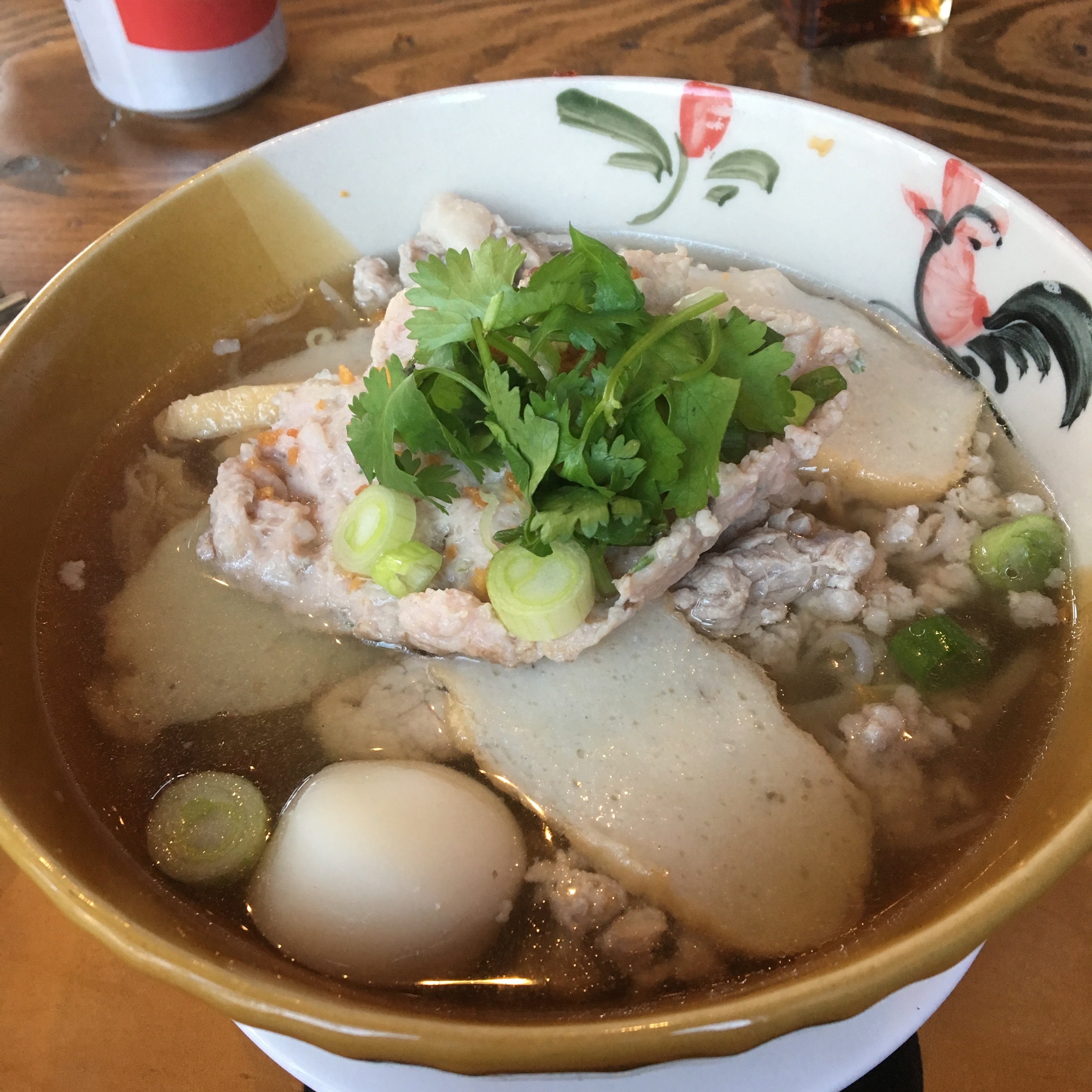 You really are hanging out at Lapats these days!

So, even though it may be comparing apples to oranges, how do you rate Lapats against the multitude of noodle options in the immediate vicinity?

Yeah, It’s within walking distance from work and open for dinner. So are some other noodle places in that area I guess (Ha Nam Ninh, Pak Nam, etc.). I like their noodles ok from what I’ve tried, but my favorite remains the pho ga from Turtle Tower down the street (closed at night). I would also go more for a Ha Nam Ninh #25 dry, and also maybe even go more for a bowl from Hai Ky Mi Gia (one of their versions of hu tieu or the beef stew noodle soup) if they were open at night. It is a bit apples and oranges as you say though. Different dishes and cuisines. I haven’t tried Pho 2000 enough for comparison, nor Pak Nam in its latest noodle-y incarnation, nor any of the other noodle options on Larkin. Zen Yai around the corner has better boat noodles than Lapats IMHO.

Yeah, I think they are just so close to each other physically that even though they serve noodles from different SE Asia countries, if there is a decision to make around ‘what noodle do i want today?’ then unless there is a strict preference for a specific type of noodle, then the better noodle joints just win out more often, whether they are thai, vietnamese, etc.

Is the kitchen of Ha Nam Ninh still painfully slow like years ago?

Is the kitchen of Ha Nam Ninh still painfully slow like years ago?

I don’t think I’ve actually experienced slow service at Ha Nam Ninh, though the restaurant hadn’t been very full the times I’ve been.