I had dinner at Stone’s Throw recently in a large group. It’s on Hyde St. in Russian Hill. The Powell-Hyde cable car line goes right by the restaurant. Stone’s Throw’s owners also run Fat Angel in the Fillmore and Trestle in North Beach. I had enjoyed a meal at Trestle a few months ago and was interested in trying its older sibling. Both serve “New American” / Cal-American food. They also both have extensive beer menus.

In additional to the regular a la carte menu, our server also offered a family style option, which was $55 and is available if your party is 6 or more people. It seemed like a good way to try a lot of things on the menu so we went for that. One of us is a vegetarian and they were very accommodating, making a little separate plate of some dishes sans meat and also adding a few extra stand-alone vegetarian dishes when the dish being served wouldn’t make sense without any meat.

Some of the dishes that we had (pictures are of a portion meant for 4 people):

This was a pâté-like mousse with a sweetish beet jelly on top. The white rectangles on the top are apples, and the “walnut genoise” underneath was like a little piece of walnut bread. Very good. 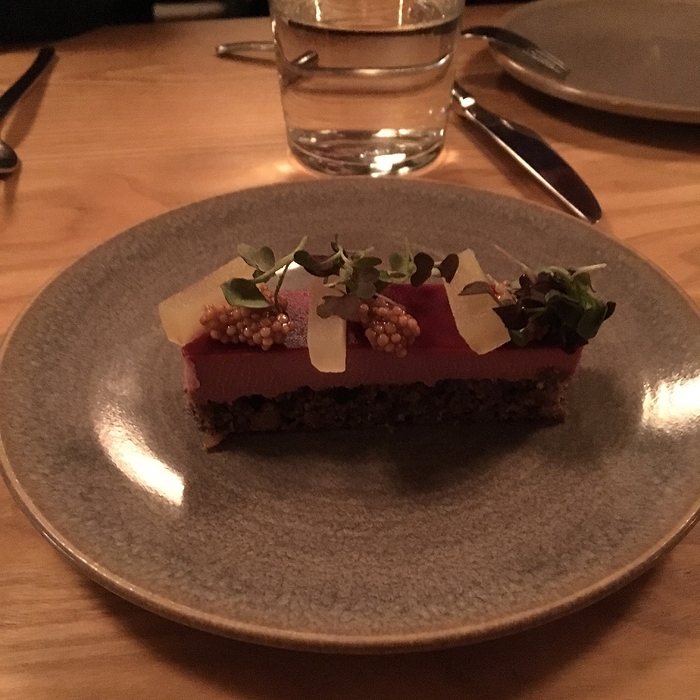 These were kind of like fried mashed/shredded potato balls and were good. The sauce underneath could have maybe used some more seasoning though. There were some nice crispy fried chicken skins in there as well. 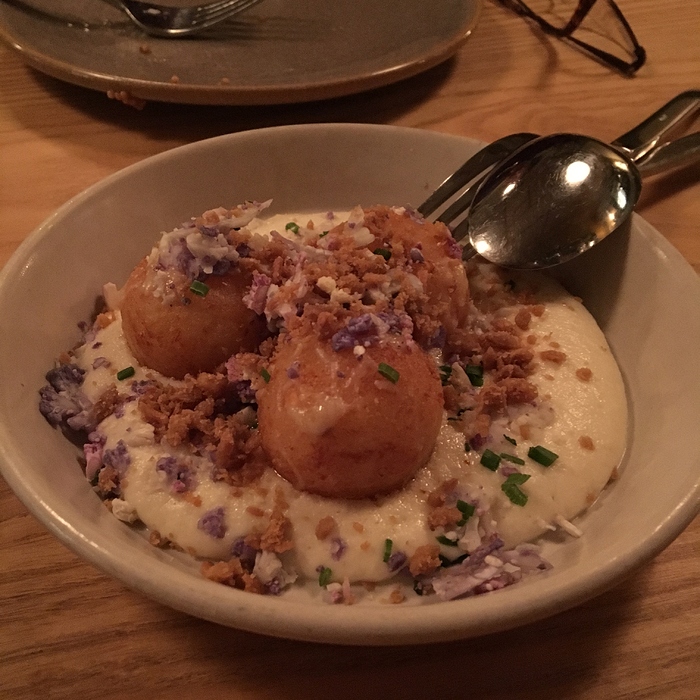 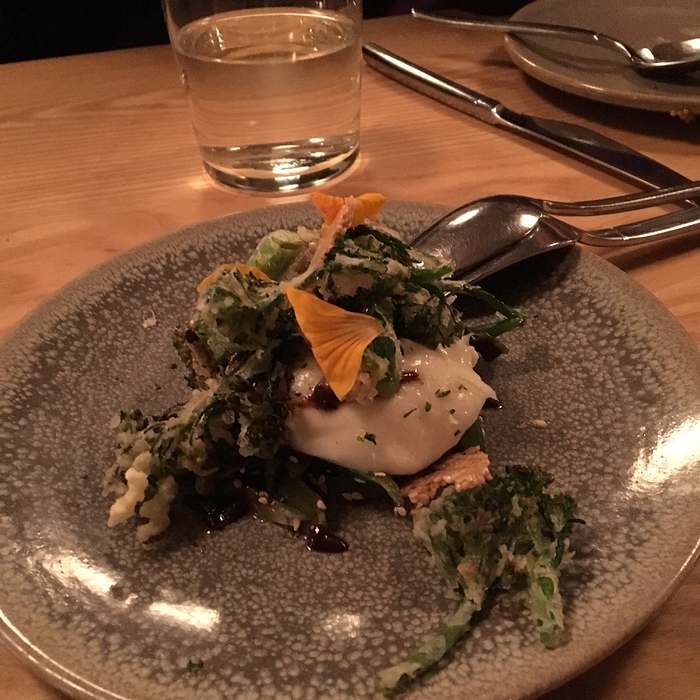 The proscuitto had been baked so that it was crispy. 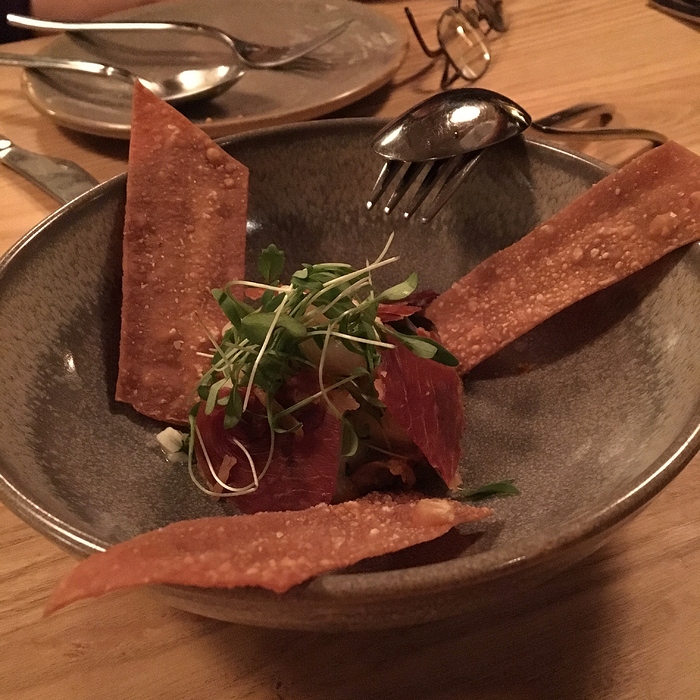 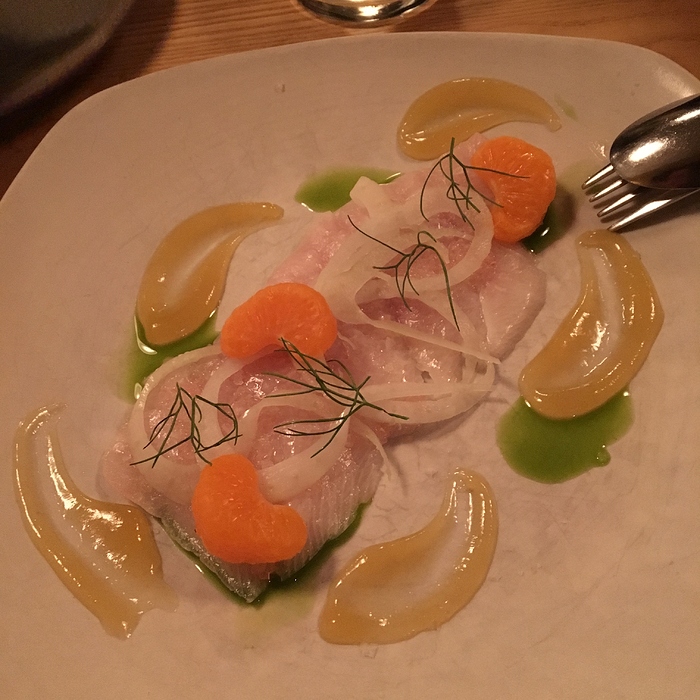 Light soubise sauce. The seafood was tender, perfectly cooked. The conchiglie was al dente. Our server said this was one of his favorite dishes and I would agree, it was very good. 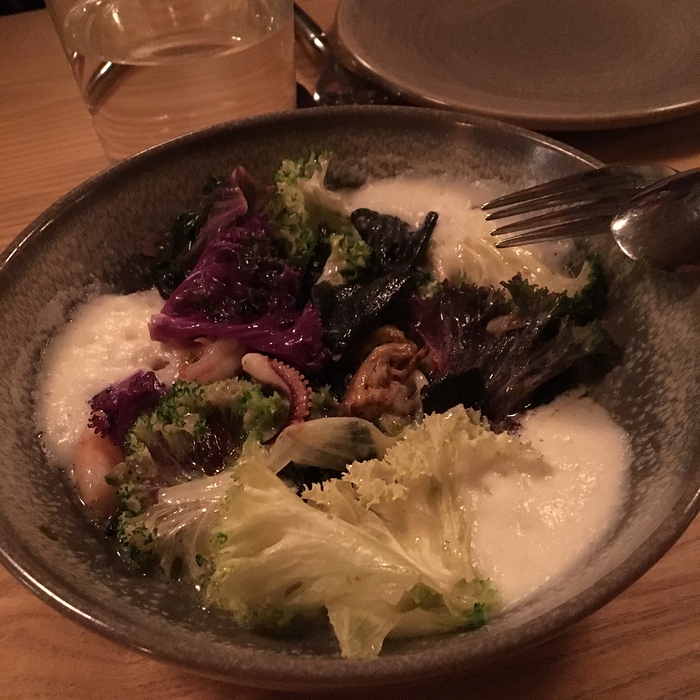 Crispy endive leaves topped with pomegranate and some quinoa. It had some smears of mascarpone cheese on the side and some slices of quince. Not bad but I probably wouldn’t order this again by itself. 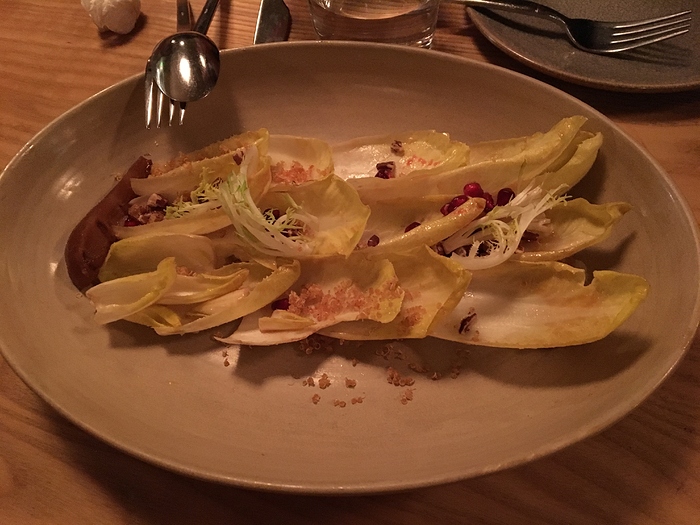 The thin tagliatelle pasta in this dish was good and al dente. However, the sauce crossed the line a bit into too sweet territory. With the spices (from the za’atar bread crumbs perhaps?) it tasted a little like a carrot cake 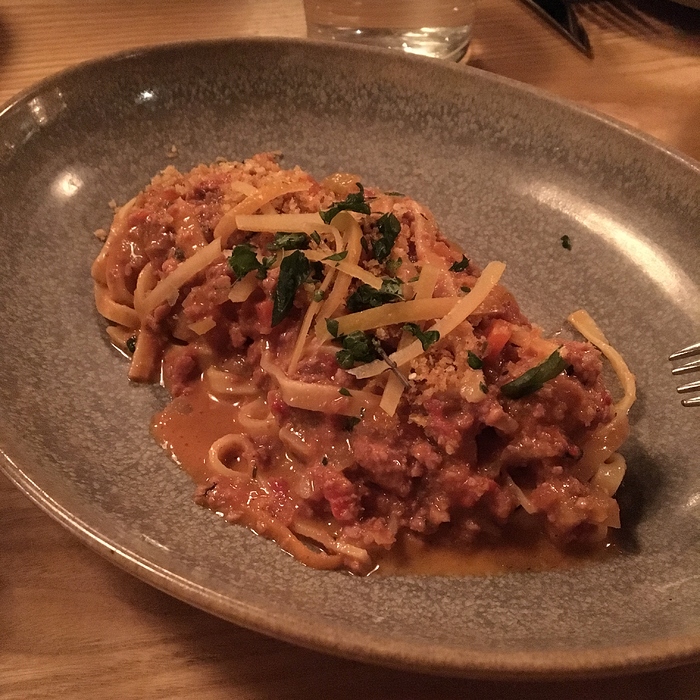 The first of our mains. This was excellent. Perfectly cooked, rare in the middle and yet still a little flaky, highlighted by the subtle dashi broth underneath. A little crunch from the puffed rice. 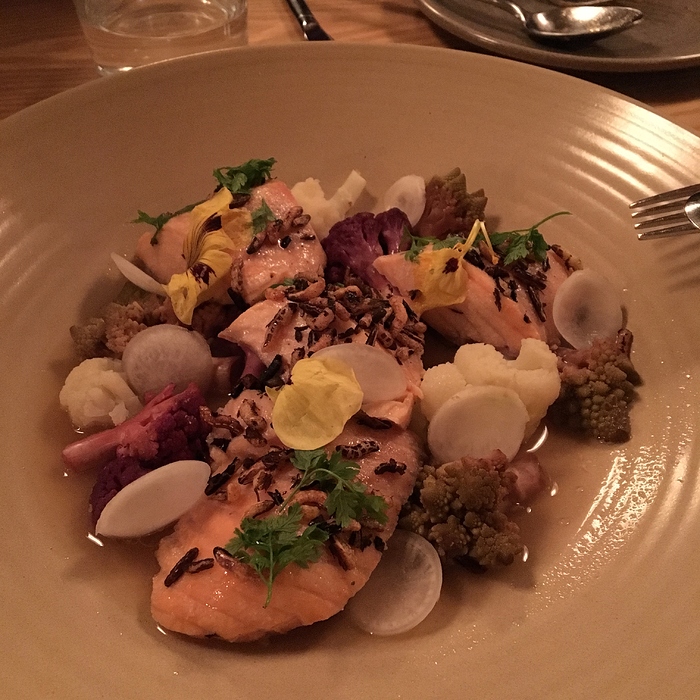 Our other main was a bavette steak. This was good - beefy and a little chewy like a good bavette should be - but I would have maybe preferred a little more sear and crust on the outside. The inside was nice and rare. 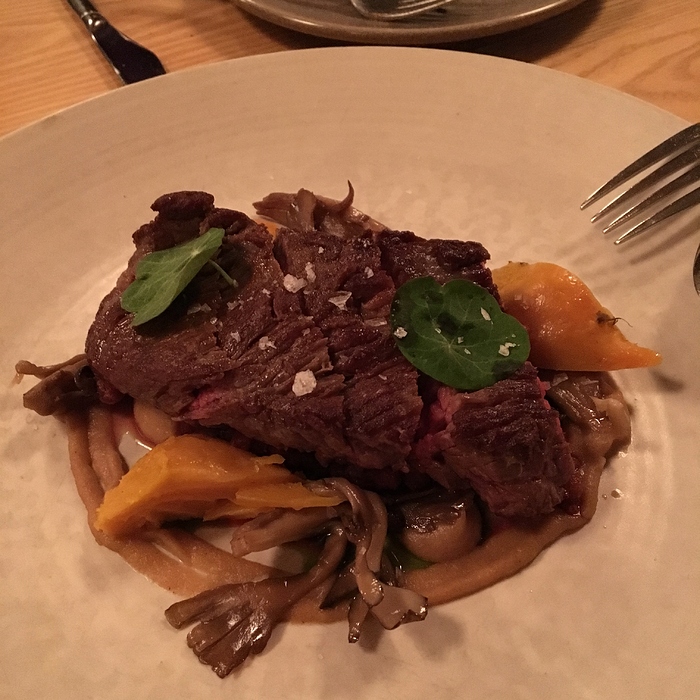 We had 3 desserts, and this was the best one of them in my opinion. A hard chocolate shell surrounding a firm creamy chocolate ice cream filling. It indeed tasted kind of like a fudgsicle. 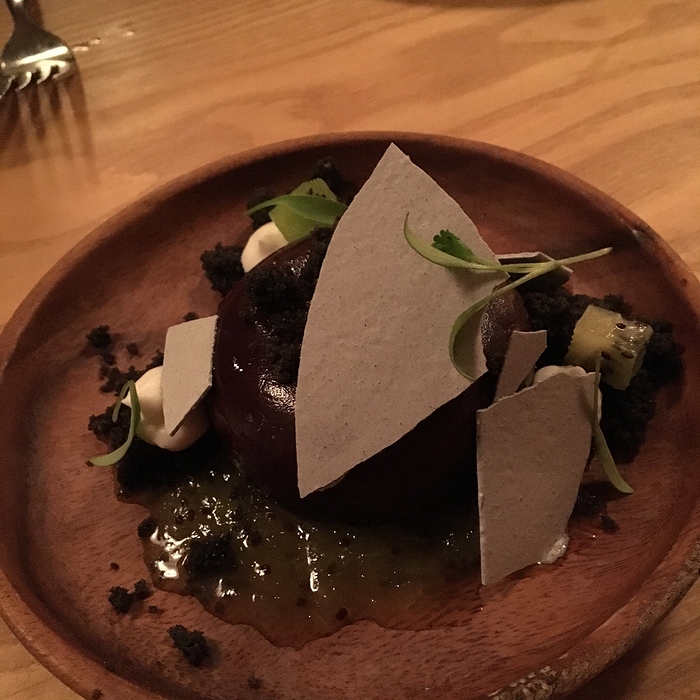 This was like an upscale deconstructed red velvet cake. Mascarpone stood in for the cream cheese frosting. One of the best “red velvet” cakes I’ve had. 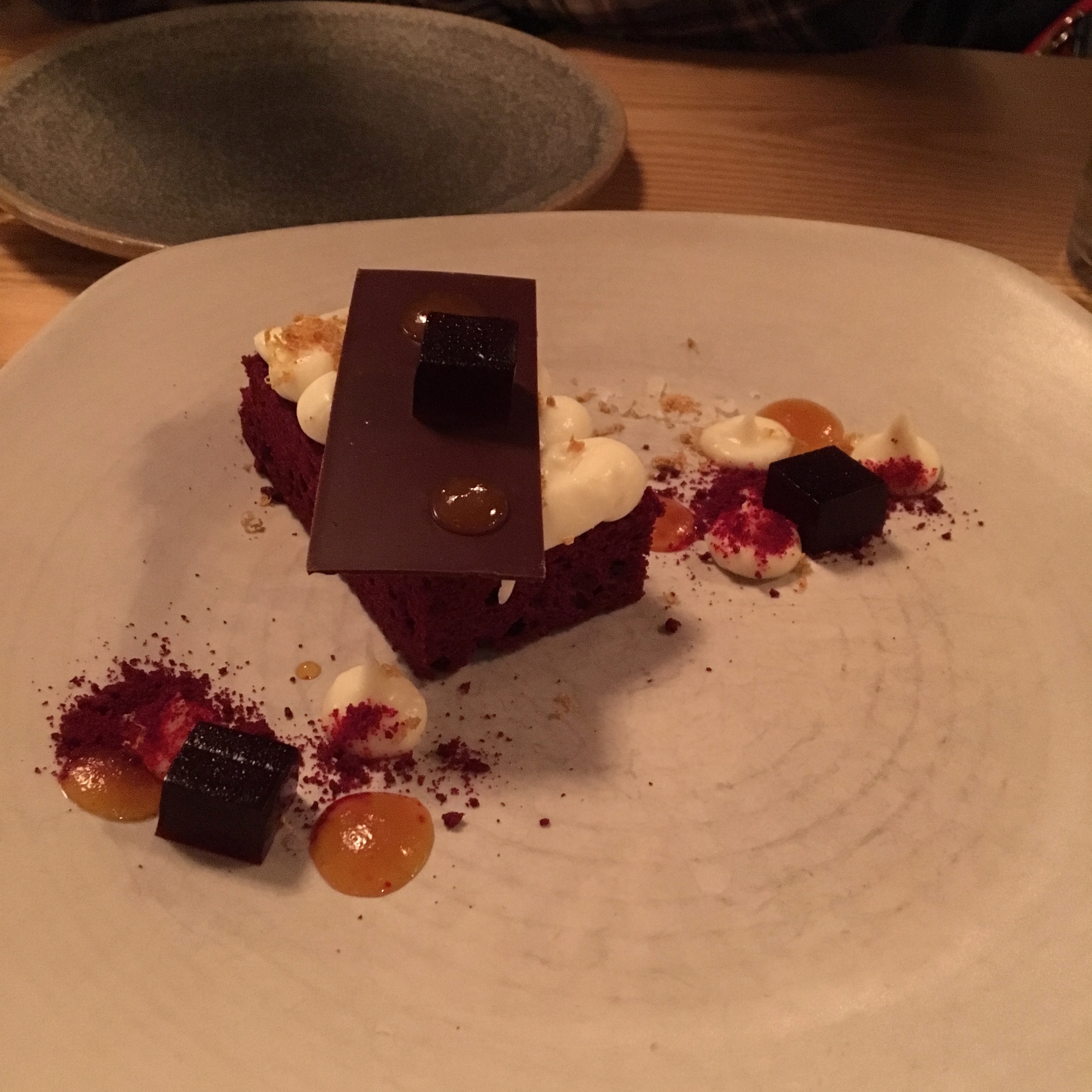 The “donuts” in this dessert were sugar dusted beignets, freshly fried and warm. 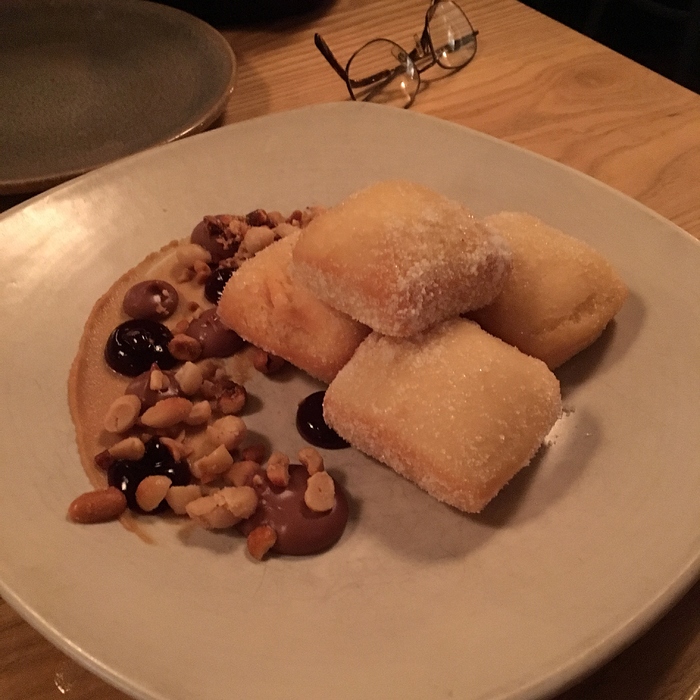 An enjoyable meal overall. The family style menu is a good way to try a good number of the dishes on the menu and a pretty good deal. Highlights for me were the conchiglie, the sea trout main, and the fudgsicle dessert.