Had lunch and dinner (on different days) at Cassava (https://www.cassavasf.com) last week. I’ve been there before and consider it a solid place.

For lunch we shared the ricotta toast and then got the Japanese Breakfast (with natto) and the Chicken Sandwich. I dd not get to taste the chicken sandwich (more on this later). All the 3 dishes were excellent, with the exception of the soup (it was not miso) with the Japanese breakfast. It just did not seem to have any flavor. Will definitely include this spot in my lunch meeting rotation. The bill for 2 with tax and tip was $75

For dinner, we were a group of 5. It was a prix fixe 3 course menu ($45) and we pretty much tried all the dishes. We also got the beverage pairing ($35, great deal, generous pours!) The standout items were the buttermilk fried chicken appetizer (definitely getting the lunch sandwich next time), the duck confit, the striped bass (though the pumpkin sauce did not seem tasty). The pumpkin cheesecake dessert was great also.

Would definitely recommend this place. The staff were super friendly both times

Came for dinner to celebrate the first night of restaurant week. I had pretty high hopes based on the menu and prior experiences, but the food experience was mixed, overall. As always, though, the service was excellent, warm, and friendly. 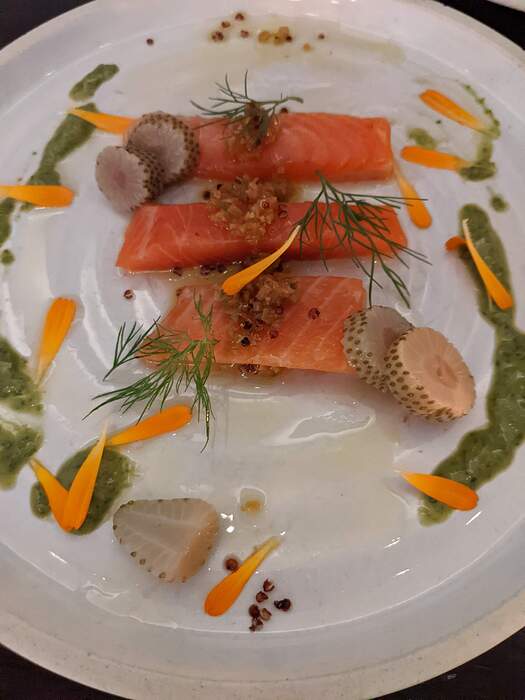 PXL_20220402_0217106783024×4032 542 KB
Every element of this dish was tasty and went well together, except for the trout roes. At first I had trouble placing where in the dish they were – I later realized that they had been somewhat cut up into a garnish, releasing the (very) salty contents all over the fish. While I like this idea in theory, it ended up making parts of the dish far too salty. Thankfully, it could be easily pushed to the side and re-added as desired. The pickled white strawberries added a nice acidity to the dish, and the basil cream helped bring a spring-like freshness. I’m not totally sure how the crispy quinoa was meant to contribute to the dish – it would have been a nice textural element, but it was quite difficult to get it onto a bite due to its size and shape. 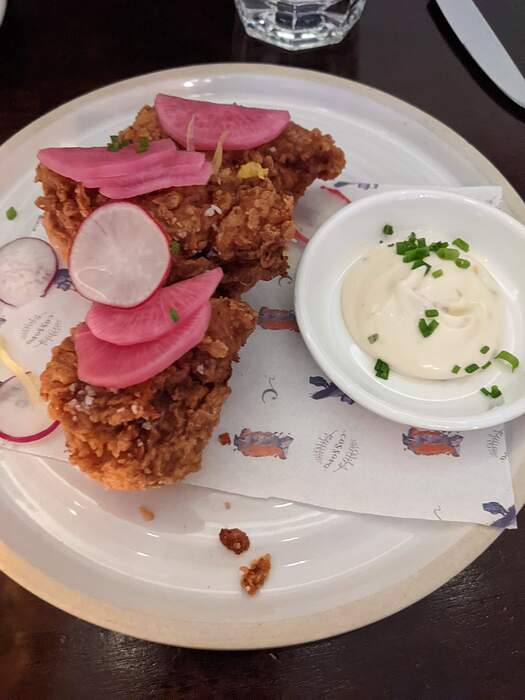 PXL_20220402_0217130813024×4032 596 KB
The star of the show. Crispy on the outside, juicy on the inside, I love a good fried chicken, and this met the mark. The green garlic mayo brought a slightly pungent, lemony creaminess to the juicy and crunchy chicken, and the jalapeno powder added a little spice and funk. The fermented radishes didn’t add much to the dish other than add color, in my opinion, but they were nice and crunchy. 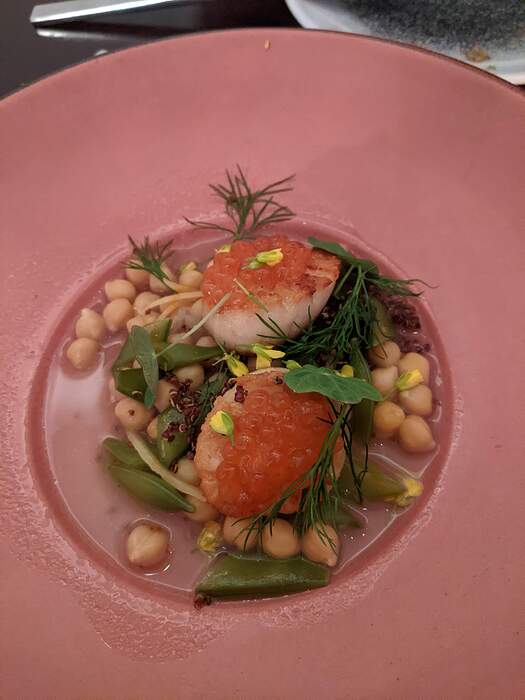 PXL_20220402_0237388903024×4032 542 KB
I’ve never seen this prep of scallops (with roe on top), and I think I’m a fan. The one downside is that, between the aquafaba broth below and the roe on top, the crispiness from searing the scallop is rapidly lost. That said, the scallops were nicely cooked, and the aquafaba broth was quite flavorful. While the snap peas were good, I wish that the chickpeas had been cooked more – while they weren’t undercooked, I would’ve preferred them creamy. 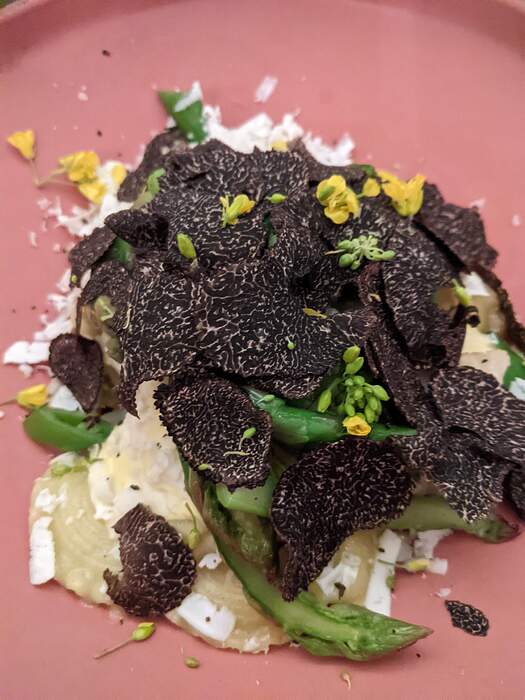 PXL_20220402_0307259763024×4032 772 KB
I really wanted to love this dish, but found myself generally underwhelmed. There was a long (but not unwelcome) break between when the scallops arrived and when the pasta got to the table, and I wonder if there was congestion in the kitchen. Regardless, while beautiful, my pasta arrived warm, rather than hot, and the truffles were underwhelming. Maybe they needed to be heated, or shaved more thinly, or something else, but they did not live up to the rich, pungent, fragrant shaved perigord truffles I’ve had previously. Also, while I love asparagus, I think it would have benefited from being cooked just a bit more in this dish, as the raw texture of the tips added something akin to graininess, in stark contrast to the creaminess of the other components. The asparagus cream was good, almost custard-like, and coated the cresto de gallo nicely. I also found it odd that the pasta was somewhat variably cooked – on one side of the plate, it was just barely undercooked, while on the other, it was slightly overcooked. That said, its texture was wonderful, and it seemed the perfect shape for this dish. 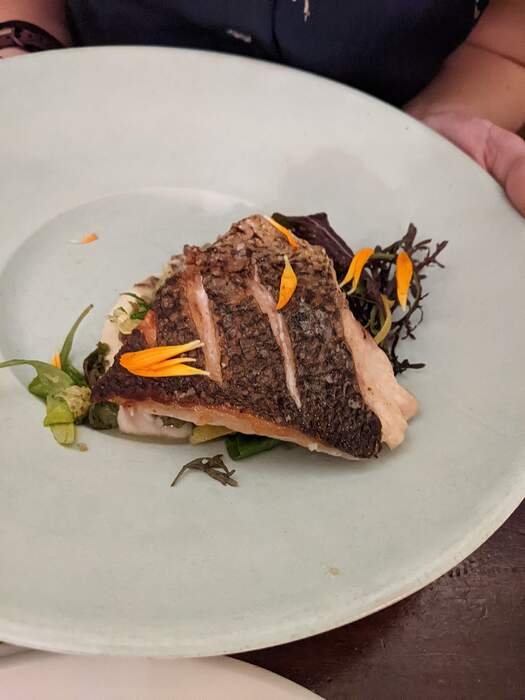 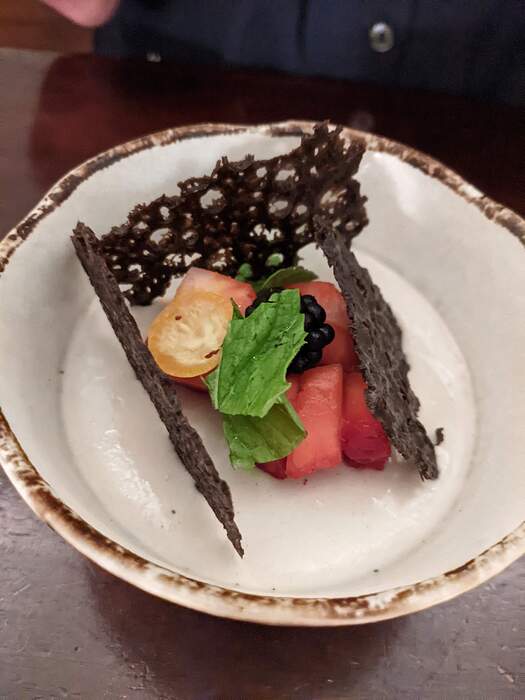 PXL_20220402_0328403523024×4032 707 KB
Very, very nice. The tuile was crunchy and chock-full of sesame flavor, as you’d hope, and the thick, rich panna cotta was creamy without feeling overindulgent. Black sesame paste was a nice surprise underneath the panna cotta and added to the flavor. The berries were a nice touch. 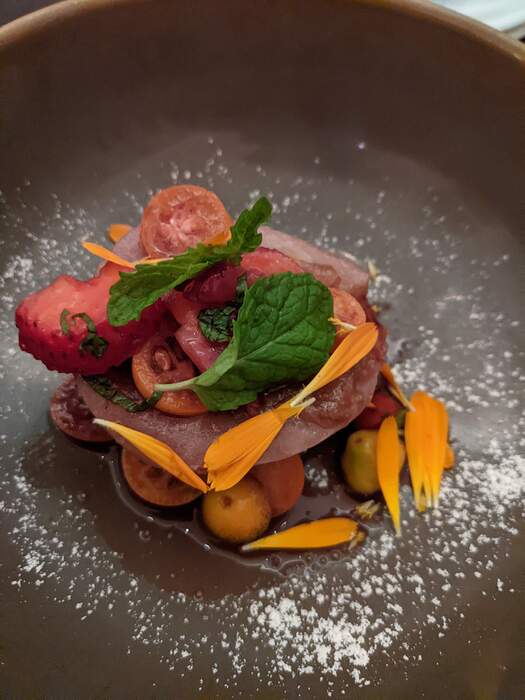 PXL_20220402_0328439663024×4032 664 KB
This was well executed, letting the flavor of the pear shine through. I’m not sure whether the yellow tomato-like slices were gooseberry or preserved kumquat, but I found them somewhat bitter and mostly pushed them to the side.

Overall, I had a nice time, but felt mixed about the food. If I were to re-do the meal, I would have kept the crudo and fried chicken, tried the grilled prawns instead of the scallops, and gone for the lamb belly and/or duck confit. The space is nice, the service is great, the stoneware is beautiful, and the food is playful. Definitely not a bad choice for restaurant week.