[San Francisco] Opinion on Cafe Asia, and eating options in the immediate vicinity of the Asian Art Museum?

We may be going to the Chinese New Year festivities in the Asian Art Museum on Sunday. Since the events runs from the morning to the afternoon, there may be little time for us to head out of the museum for lunch.

Question is, how’s Cafe Asia inside the museum? According to their website, its run by Melinda Quirino, who developed the Asian menu at Hotel Nikko. Anyone had experience at Hotel Nikko?

Alternatively, if we are to head out to eat, anything good within 2, 3 blocks, regardless of cuisines?

Sunday lunchtime there’s not much open in that immediate vicinity. Brenda’s Soul Food is about 3 blocks north and 1 block west of the museum and serves brunch. Dirty Water is a couple blocks south of the museum and serves brunch but I have not tried their brunch. I see Nojo ramen is open then also, might be your best bet (try the nanban). A block further west is Monsieur Benjamin.

The TL is right there so maybe Turtle Tower (Larkin location is open Sunday according to their Facebook page), Ha Nam Ninh, Pak Nam Thai, Lers Ros, Saigon Sandwich, Hai Ky Mi Gia, Zen Yai Thai, Sai Jai Thai, Brenda’s French Soul Food as @barleywino mentioned (can be a wait for brunch though sometimes). Some of the Vietnamese places I mentioned may be closed for the new year. Absinthe in Hayes Valley has a pretty good brunch too.

for casual places in hayes valley, i’d recommend the following:

I dont know if tacos cala has expanded and is open on weekends also. If so, that is worth a visit.

I don’t know what they’re currently serving at Cafe Asia, because they rotate a lot, but it’s generally decent for cafeteria-style service. If you dislike “Third Wave” coffee as I do, you may like the coffee there from Vasquez.

Ah. got it. thanks all for the suggestions. I guess I hadn’t considered the eateries right next to Asian Art Museum and the City Hall are catered to the office workers. I was hoping that there are something very close by because with the little kids, even walking a block can be quite miserable when they are hungry (kids sprawling on the floor refusing to walk, etc. ). We’ll see how they do at the time, what the event schedule looks like, how the menu and the lines look at the museum cafe and decide where we are going to eat. One of the options may be to forego the morning activities, go for an early lunch in the Tenderloin or Hayes Valley, and then go visit the museum. We’ll see.

@dlobo Taco Cala is still only a M-F operation unfortunately.

I got this list of cooked food vendors from the UN Plaza farmer’s market site. Sundays there are Auntie Lan, Estrellitas, Edith’s, Sukhi, Hummus Guy, Pak Foods. I found most farmer’s market food to be high priced, often watered down if they are international foods. Are any of these any good? 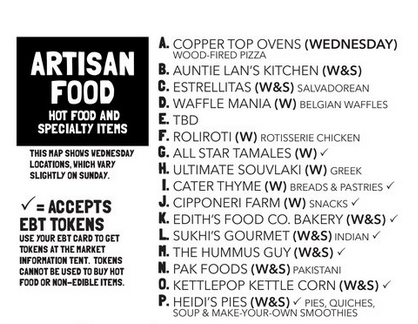 Ananda Fuara the veggie restaurant seems close by. Does anyone here like it? Though Robert L doesn’t seem to be so hot about it.

Just for my own notes, this is the list of restaurant that are closed this sunday:
Azalina: closed Sundays

The very-nearby indian restaurant August 1 Five is also closed on Sundays, as is Perennial. In the Twitter building there is also Slice House, open on Sundays. If the kids get cranky, take them to Ice Cream Bar.

I haven’t eaten at Lalita’s since I worked at Trinity Plaza, many years ago. Also, I’m much better grounded in Thai food now than I was then so my tastes may have changed even if the food hasn’t. In other words, ignore whatever I said about it in the past.

re: Azalina’s, The Market’s website says “Open Daily” so I assumed that included Sundays.

Estrellita’s makes very good pupusas. I haven’t had any better elsewhere, although I haven’t made a study of them. I like the mushroom and the Loroco. They also have yucca chips. I have eaten at their stand at the Alemeny flea market many times and the weekday stand at UN Plaza.

Most people seem to like Roli Roti. I don’t think they do porchetta there, but who knows. The potatoes that roast under the cooking birds are great.

Agreed on Estrellita’s. They’re a L:a Cocina product too, and I always feel good supporting LC’s clients and graduates.

Roli Roti is not there on Sundays.

Thanks. How are their tamales?

All Star’s makes very good tamales, at least as I’ve had at the Alemany Market. That would be my top pick for CC market.

I’d like to learn of other interesting vendors but nothing has been visually appealing to me there.

All Star’s makes very good tamales, at least as I’ve had at the Alemany Market. That would be my top pick for CC market.

Alas they are only there on Wednesdays.

I usually go for Estrellita’s pupusas. I agree with @hyperbowler on All Star Tamales, but they apparently aren’t there on Sundays.

Well, a surprise source of disappointment coming from a reliable (to us) restaurant.

Our first choice, Estrellita’s is a no-show at the farmer’s market. I asked the Market Info stand and they said that the senora comes on Wednesdays. I guess its not a big surprise since the market wasn’t exactly hopping on Sunday.

So we decided to walk up Larkin since the museum is on Larkin. Since kid requested noodle, noodle it was. First choice- Hai Ky Mi Gia. Closed for New Year. Ha Nam Ninh across the street, same. Since the wife hadn’t been to Lers Ros for a while, Lers Ros it was. (BTW, Turtle Tower and Pak Nam were open for anyone looking to go).

74 This was the meat ball dark soup noodle that I was quite fond of. Today’s version was fine. The soup was very mildly hot. The noodle was generous with sliced beef and meat ball. But the whole noodle felt ‘safe’, with little of the bold flavoring not held back for Western palates. The five spice pork leg felt ‘safe’ too.

The chicken noodle soup was for the kids, and I don’t think that dish was supposed to be great so no issue here.

How are people’s recent experience with Lers Ros? Did they tone it down for us or did I miss the memo that something changed in the kitchen?

Sorry you had a bad meal at Lers Ros. I have gotten the Khao Kha Moo there and liked it but haven’t been in awhile.

Sorry you had a bad meal at Lers Ros. I have gotten the Khao Kha Moo there and liked it but haven’t been in awhile.

I wonder if some of the chefs were on vacation. Its not that the meal was bad, but muted/ meek, missing the boldness that separates Lers Ros from the usual Thai restaurants that serve curries in every color. Of course, I had a very limited sample of dishes, so hopefully that was an anomaly rather than the norm.

Sadly, All Star tamales disappeared a while ago from Alemany. Other food vendors claim ignorance as to the reason.