After reading @mariacarmen’s review of The Morris, and receiving a recommendation from a chef in the city, I thought I’d go eat at The Morris.

The chef makes all the charcuterie in-house. I had the duck rillette, which had a herb I couldn’t place that impart a cool flavor, and the slightly spicy pate campagne. Both were mellow and delicious. Came with toasted Tartine bread. 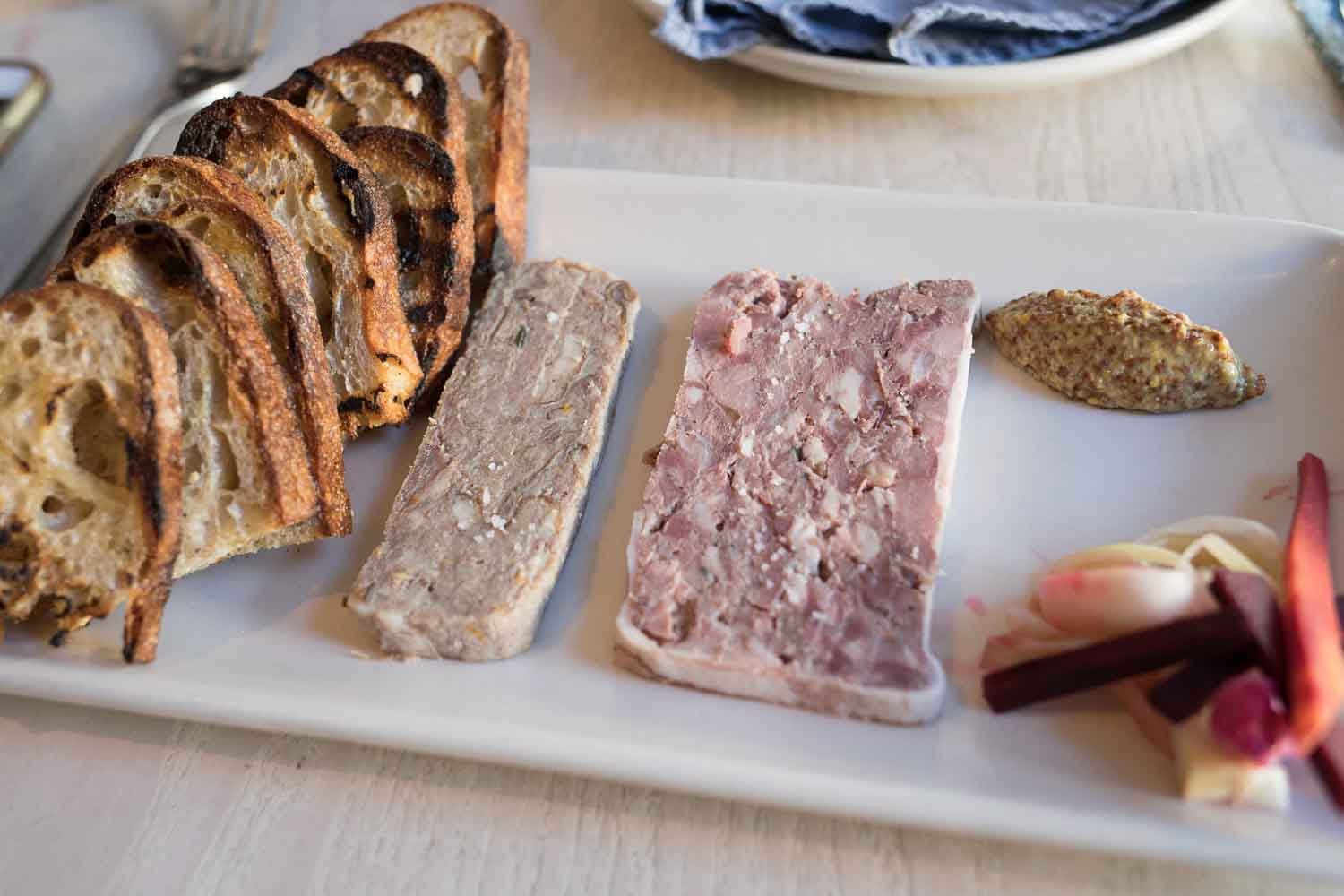 Charred broccoli, grilled squid, chili lime. The chili lime sauce was intensely salty and hot. Its much hotter than anything that usually shows up in a New American restaurant. The squid was tender and the broccoli was fairly raw in texture and was charred. The whole dish tasted very Southeast Asian. I asked later and the chili lime sauce was made with lots of garlic, lime, chili with the ingredient that would explain the SE Asian-ness- fish sauce. This dish wouldn’t be out of place at a fancy Vietnamese place. Very good dish. 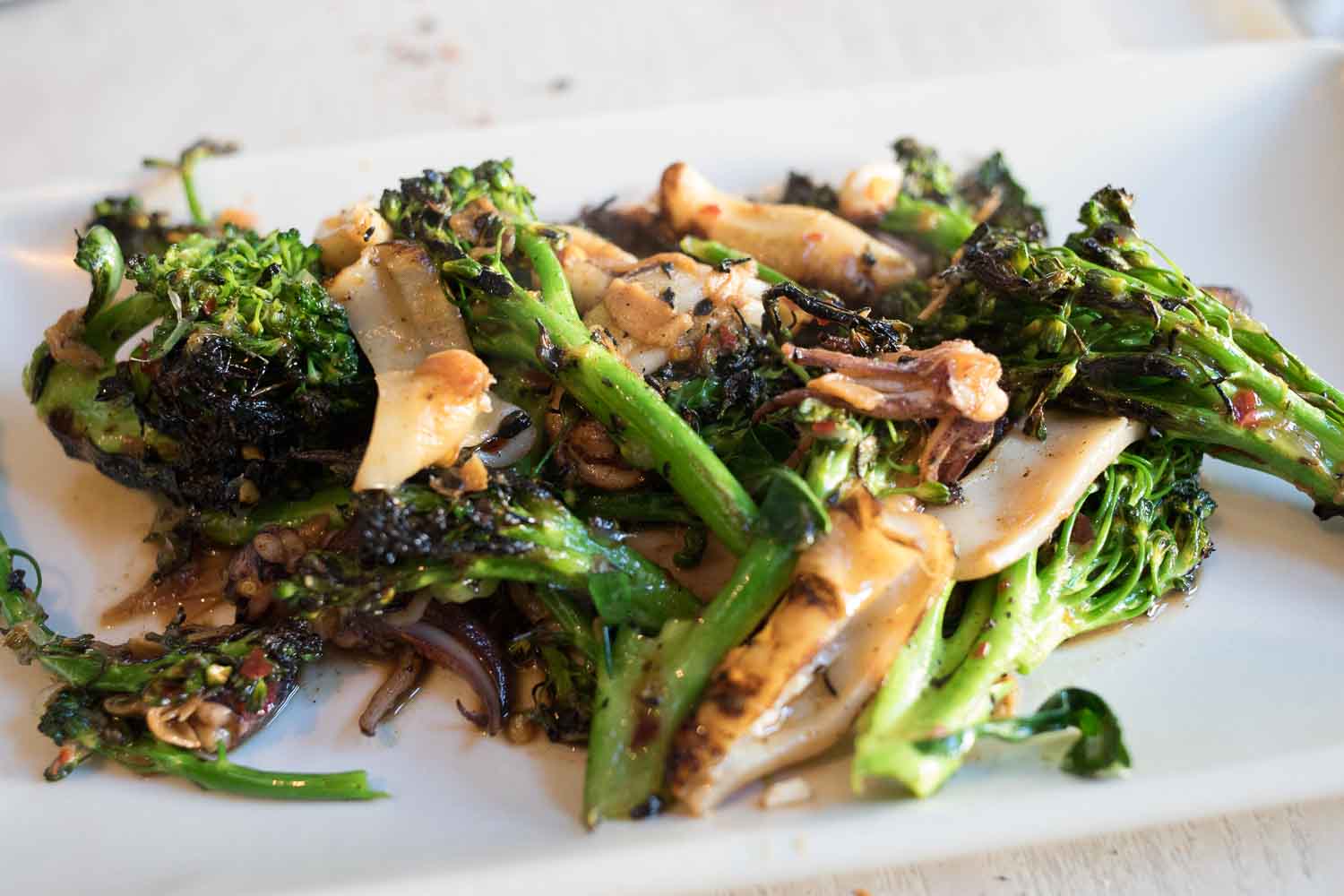 Beef brisket, corn, poblano crema. The brisket was brined for 36 hours, and then smoked with mesquite and cherry wood in the smoker for 10 hours. The sauce was made with poblano and jalapeño pepper, with lime and I think epazote cream. The brisket was brined just right, and combined with the sauce beautifully. The brisket was mostly moist and tender, just a little tough on the edge from the smoking. Served with a smokey peach that was a bit bland. Very good dish. 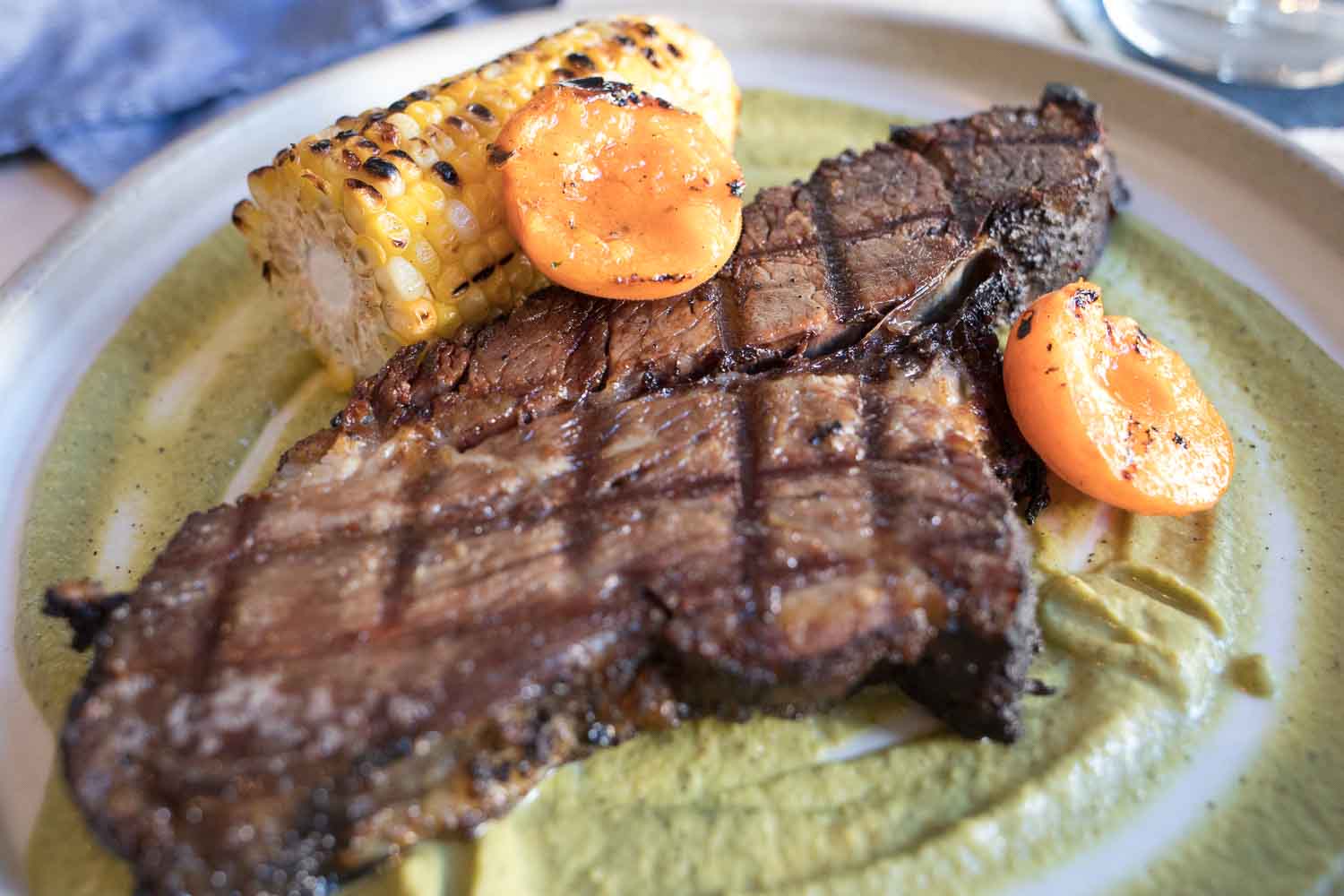 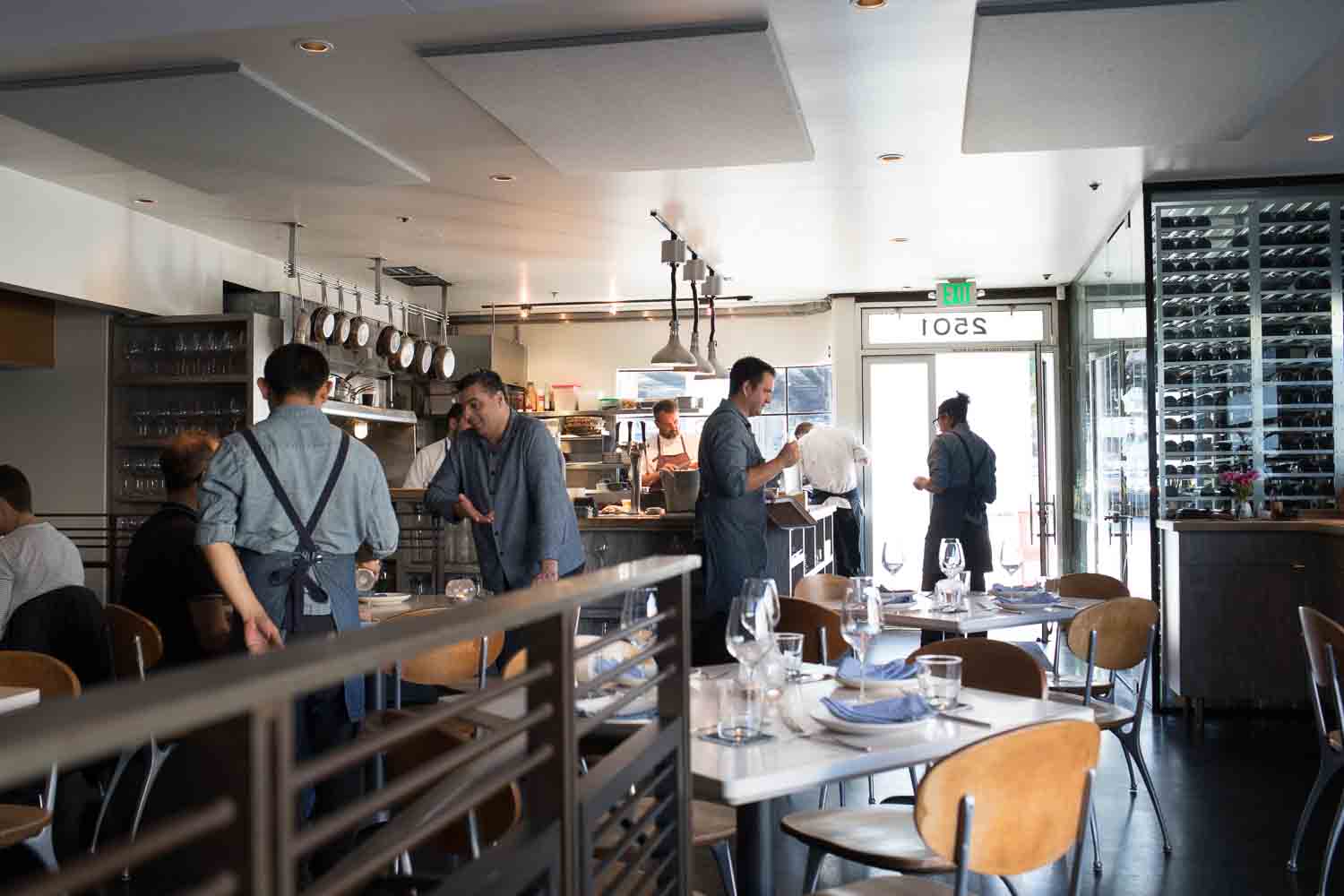 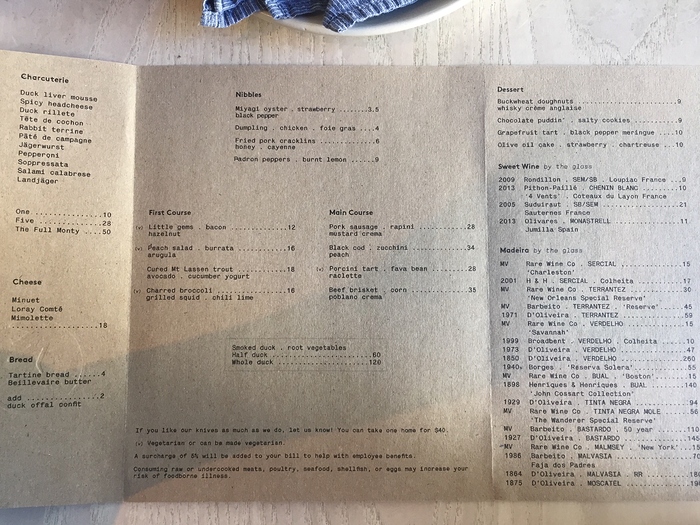 House wine is served just like at Frances, since Eindbund came from there. Served in a carafe. You pay by the centimeter of what you drink. I forgot what exactly they said, but the delicious house red was I think a blend of cabernet franc, zinfindel, and something else (barbera?!). 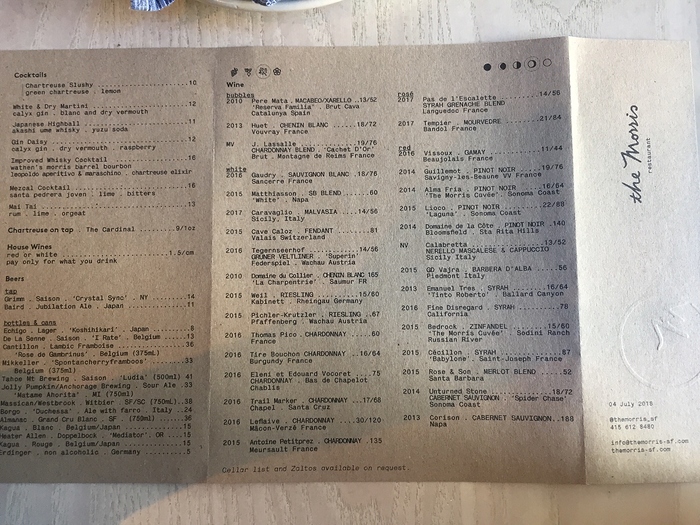 Very enjoyable meal. Except for the charcuterie, the two dishes employ techniques and ingredients from different cuisines. I asked about their comte and they said that its aged 36 month. I haven’t seen comte this old sold at the cheese stores around here. Has anyone seen it?

The Morris is located on the opposite side of the Muni Depot.

Your pics are better than mine! (may I ask what you’re using? i need to step up my game.)

Glad you liked it!

I just use an SLR with a prime lens- that’s what i use to take pictures of the kids. but I don’t make any special effort to arrange the table etc. just point and then eat. The latest phones that have two cameras can take very good photos of food as well, and can blur the non-food background.

Reading more about the chef’s prior experience, it looks like he worked in somewhere around Lafayette before, and liked to work with whole animals. That would explain the focus on the various types of charcuterie.

thanks. Yes, i use my cell phone, can’t see myself taking a camera out when doing reviews, seems more obvious, somehow.

I loved that charcuterie plate. That and the brussel sprouts were probably my favorite things of both my visits.

Even more than the duck?

The brussel sprouts were better than the duck! But we did like the duck, don’t get me wrong.

I wonder if the herb used in the duck rillette was salad burnet:
" With its clean, crisp cucumber flavor, salad burnet is surprising to those who try it for the first time, and appreciated the more it’s used in the kitchen. Introduced to Elizabethan England in the 16th century as an ornamental herb, the leaves were floated as a garnish in goblets of wine. "

I’ve had burnet used to flavor plain water (can’t remember the restaurant now) and it definitely has that cucumber-like taste and coolness.

Do you know how big the duck is? It is kinda pricey though.

No, not sure, but 4 of us split the half duck, with the other things we ordered. It was plenty.

I sent a note to the restaurant asking them. Let’s see if they respond.

One weird bit of trivia about Morris is that it’s an unexpected place to get teh tarik (pulled tea). It’s buried way at the end of the wine menu. I believe Paul’s wife is Malaysian, so he’s spent a fair amount of time in that part of the world.

I believe Paul’s wife is Malaysian, so he’s spent a fair amount of time in that part of the world.

If you didn’t mention, I would have never known about the teh tarik… 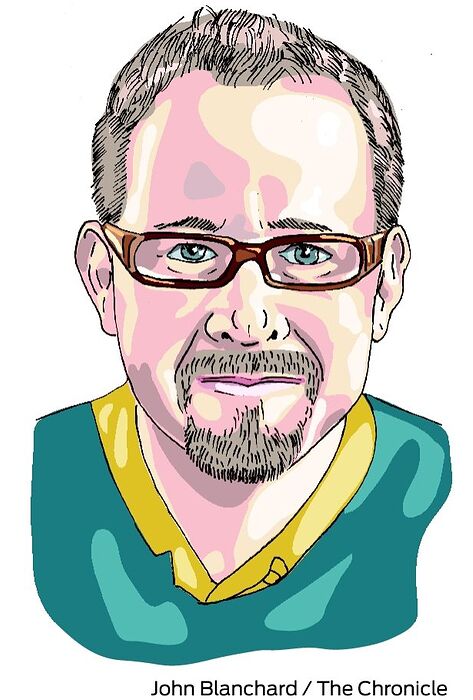 [...] he also cooks at home and eats out often with his wife, Vanessa Yap-Einbund, a...

I had dinner at the Morris a couple times last December. I went solo and so didn’t get to try their signature smoked duck.

Tête de cochon ($12)
Pork head? Off the Charcuterie board. I asked if this was head cheese and it isn’t. Quite good, a little crunchy with porky goodness. It came with some crispy thin toast rounds and whole grain mustard and some pickles. Reminded me a little of some of the charcuterie in a combo banh mi. 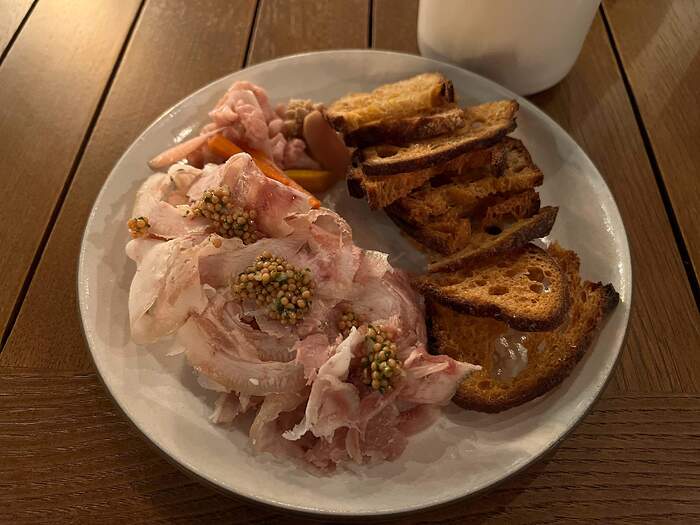 Grilled duck heart skewers ($6)
These were really good! Perfectly cooked and tender with a nice glaze. 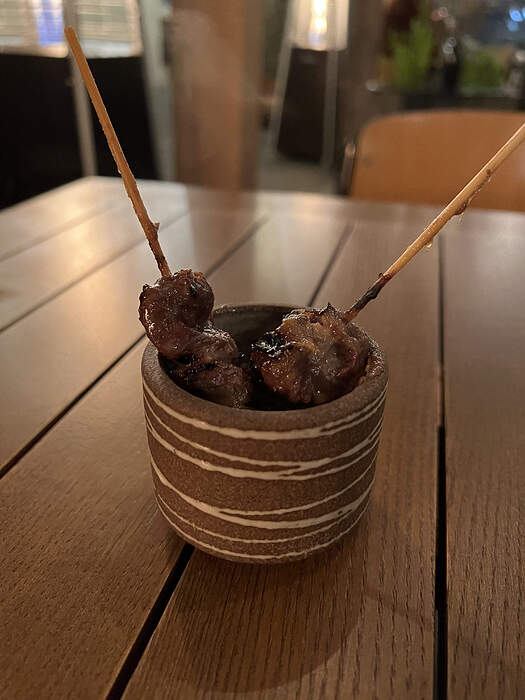 Sausage with farro and grilled cabbage
Had the sausage one night. I forgot to take a pic of the menu and it’s not on there anymore so don’t have the exact description, but this had some farro in a little broth and I think a grilled cabbage. I thought this was just fine. Good flavor in the sausage but the texture was a little too firm and mealy to my taste. 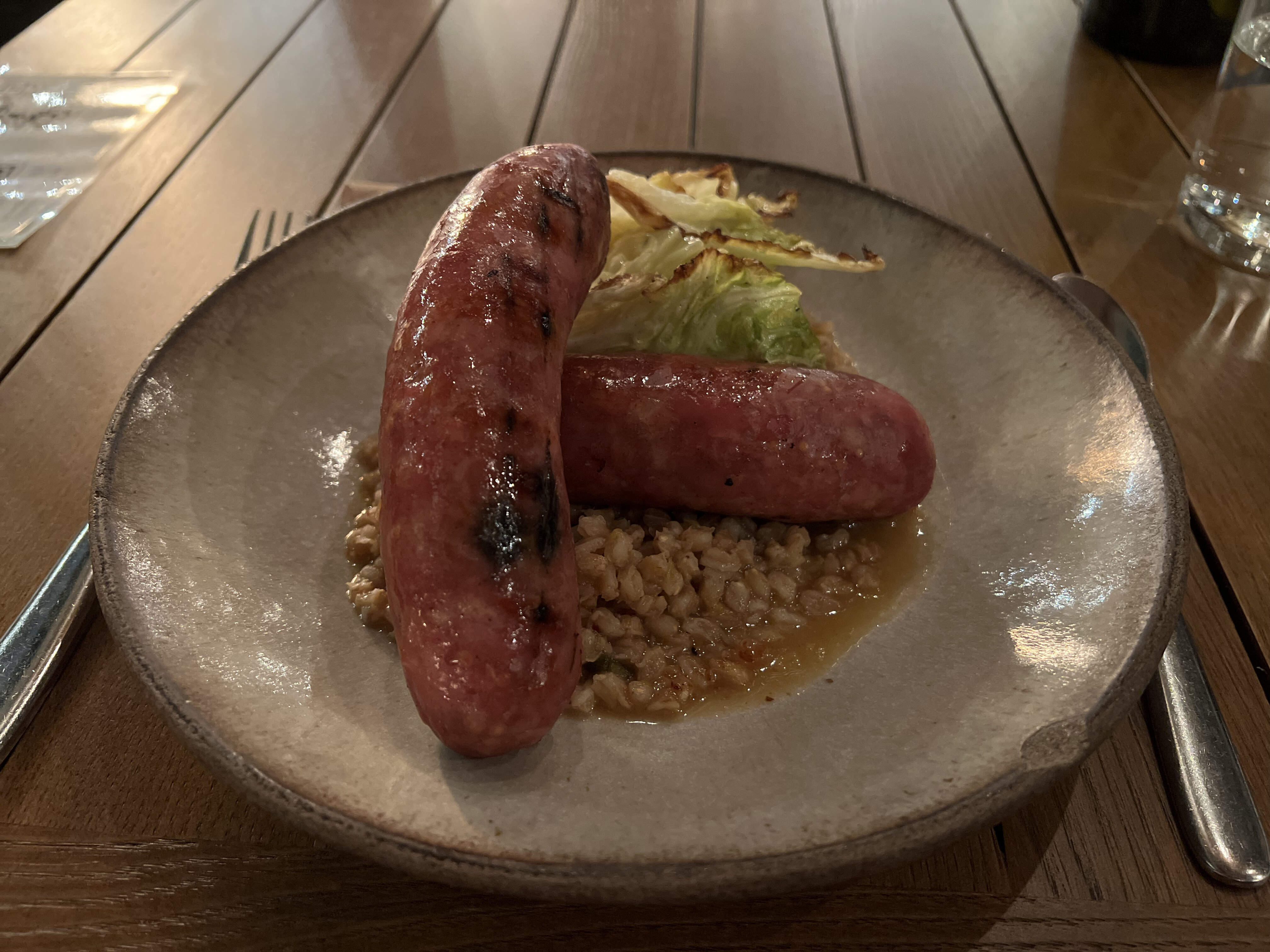 Morris Burger with Raclette Cheese ($21.50)
Wednesday is burger night. I had a burger on a Wednesday, natch, with optional raclette cheese. This was just a great burger. Kind of a focaccia textured bun, with a juicy medium rare patty. I appreciated that it was actually possible to eat this burger without making too big a mess of myself. Came with some very good fries served with aioli and ketchup. 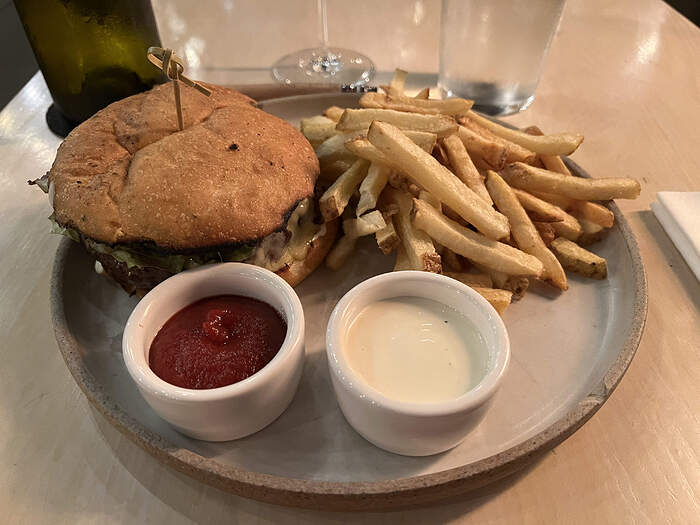 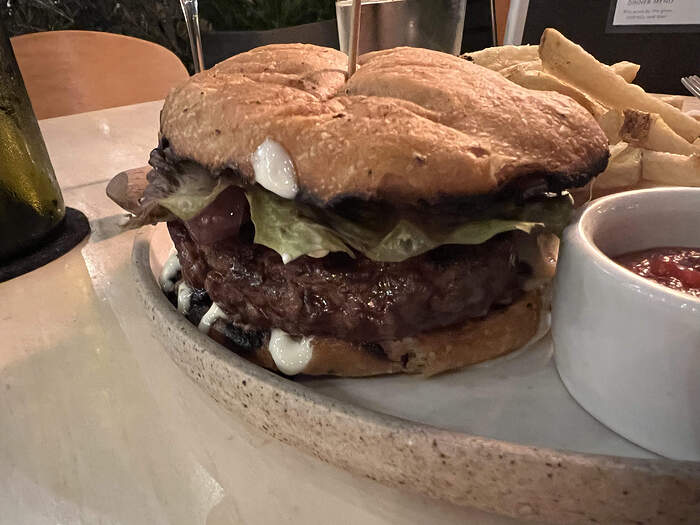 Buckwheat doughnuts ($11)
whiskey crème anglaise
Also had an order of the buckwheat donuts for dessert one time, which were some nice cinnamon coated donuts. They had a little more chew than typical donuts that I’m guessing is due to the buckwheat. 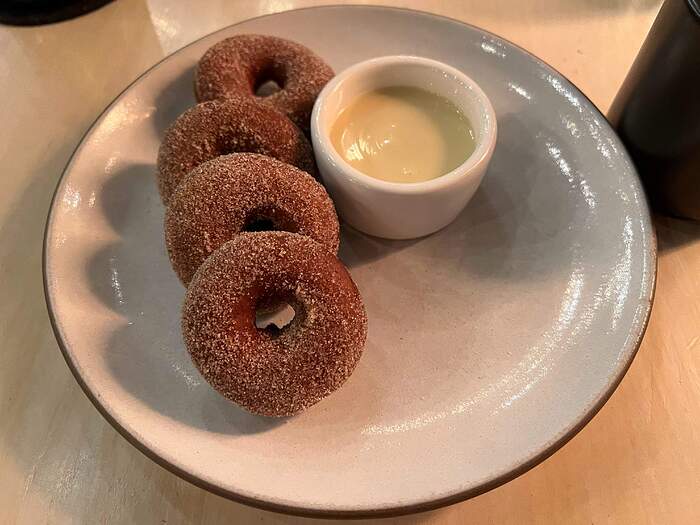 The Morris has a lot of Chartreuse - a green herbal French liqueur - on their drinks menu, in various vintages. I had a glass of their house Chartreuse as a digestif one night, which is simply a 1:1 mix of green Chartreuse and yellow Chartreuse, and on the other night a glass of the 1605 Chartreuse.

They have a heated parklet if you want to sit outside. Will come back for the Wednesday burger and the duck hearts and to try more of the charcuterie. And the smoked duck if I can find some people to go with.

They usually have a $2 duck offal confit add-on for the bread that I would buy by the pint if I could. Once Paul brought that out along with the duck heart skewers and just commented, “Hearts and minds”.