[San Francisco, Mission] Hawker Fare- Isaan goodness- and what do/ don’t you like?

James Syhabout’s Hawking Bird gets all the press these days. The good ol’ Hawker Fare seems to need some love that it deserves. Their Yelp rating is atrocious for the kind of food that they put out. Summary: Good meal. Balanced and restrained spicing. Wonderful made-from scratch sauces that stood out from the competition (that I promptly saved for later meals). 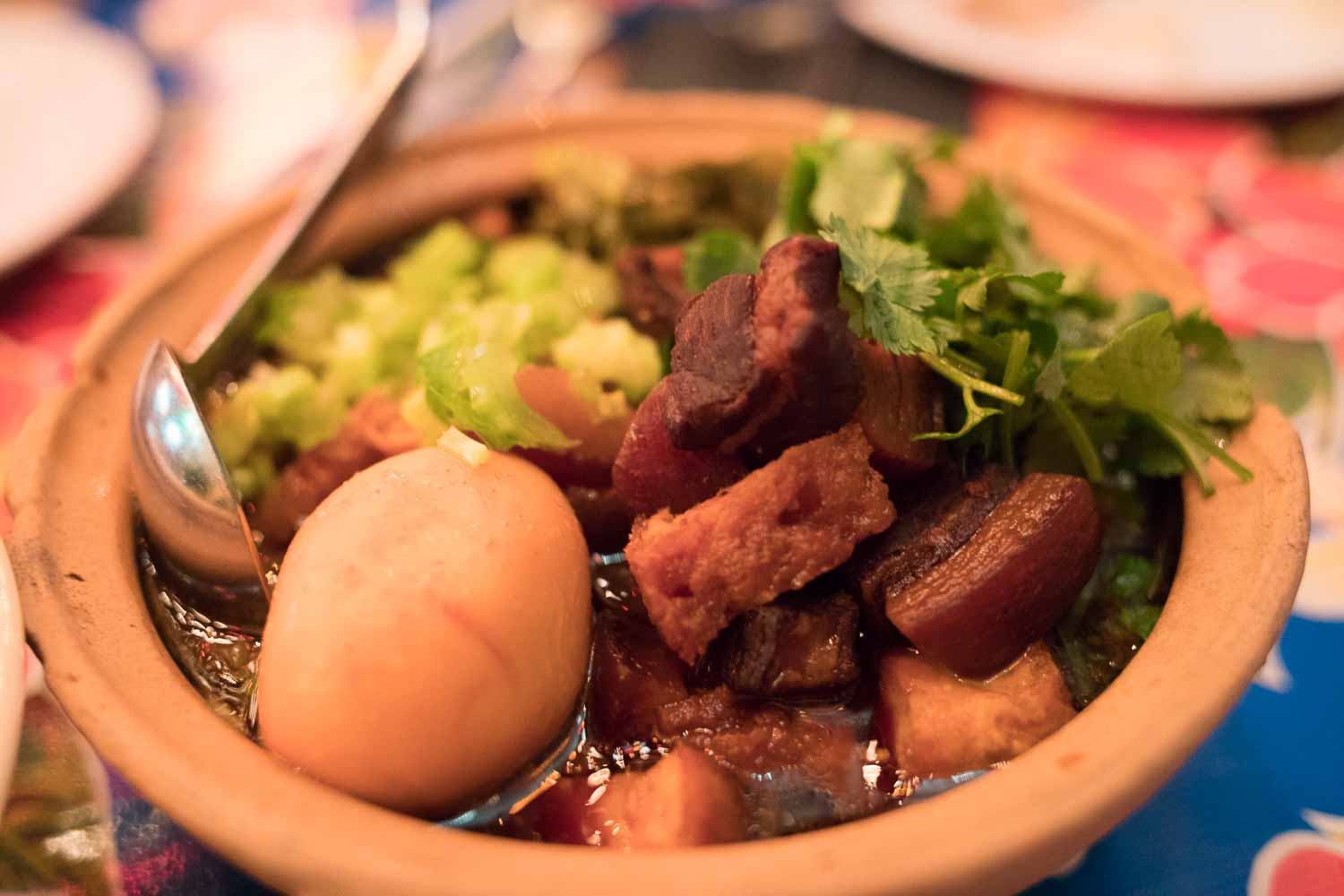 Gelatin-y pork belly braised in a broth full of umami from the fish sauce, aromatics, pickled mustard greens. Came with sriracha to be added to the mix. I call it pork belly candy goodness. Hawking Bird and the khao mun gai gets all the press these days. But the same khao mun gai is on the Hawker Fare menu too. Good dish. That sauce, made from ginger and fermented bean, was fab. Deeply flavored, balanced. In fact, we made our own khao mun gai at home the day after just so we can take advantage of the sauce we saved from this meal. The chicken itself was dark and had good chicken-y flavor. The jasmine rice was flavored well with chicken fat. 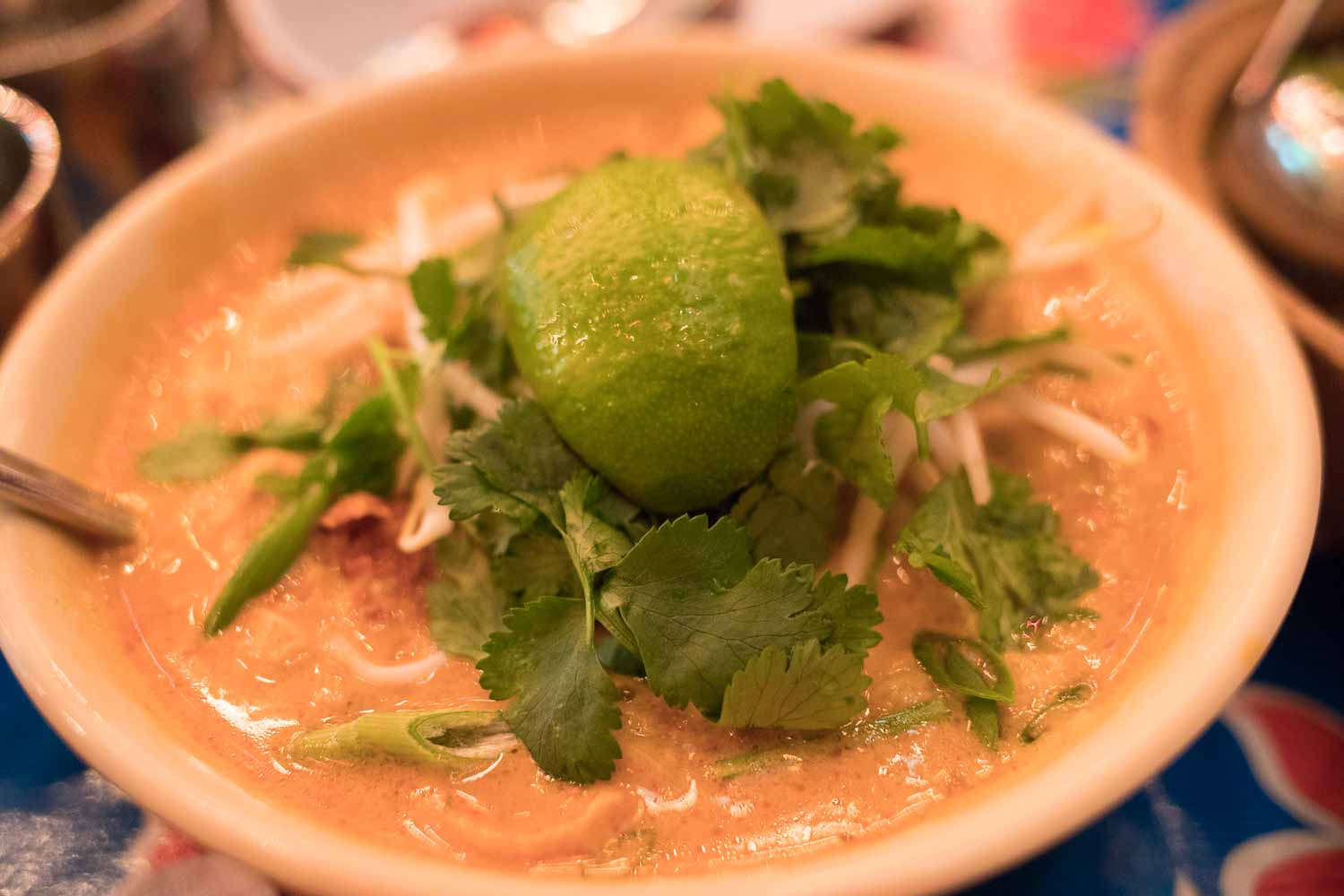 Curry broth seasoned with tamarind and what I thought was coconut based curry but the menu said its fermented bean paste (I had a cold…), with the flat rice noodles soaking up the aromatic orchestra of flavors. The one complaint that I had was that there weren’t enough noodles to soak up all the rich broth.

Not really sure why a restaurant like this is not getting more love (3*) on Yelp. There were complaints about service but it seemed to be ok other than the place was a little short staffed later in the evening when the restaurant got fuller. In fact, its odd that reservations were easily available on a Saturday evening for this restaurant that’s located in a prime neighborhood. The restaurant was pretty empty when we showed up at 5:45pm but filled up when we left.

Have to come back to this ‘established’ restaurant more frequently. What else do people like these days at Hawker Fare? 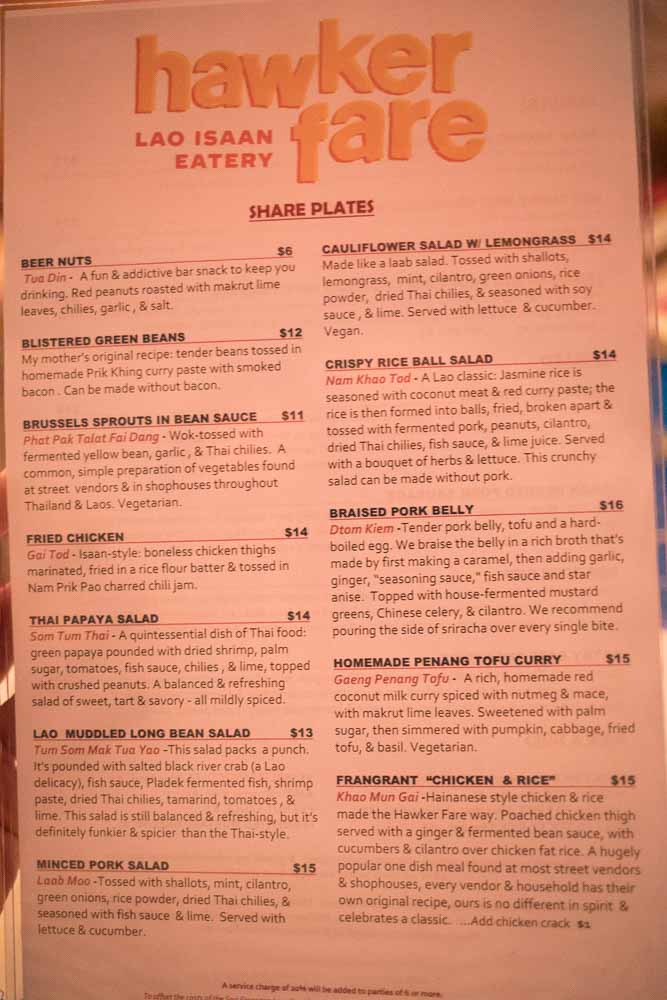 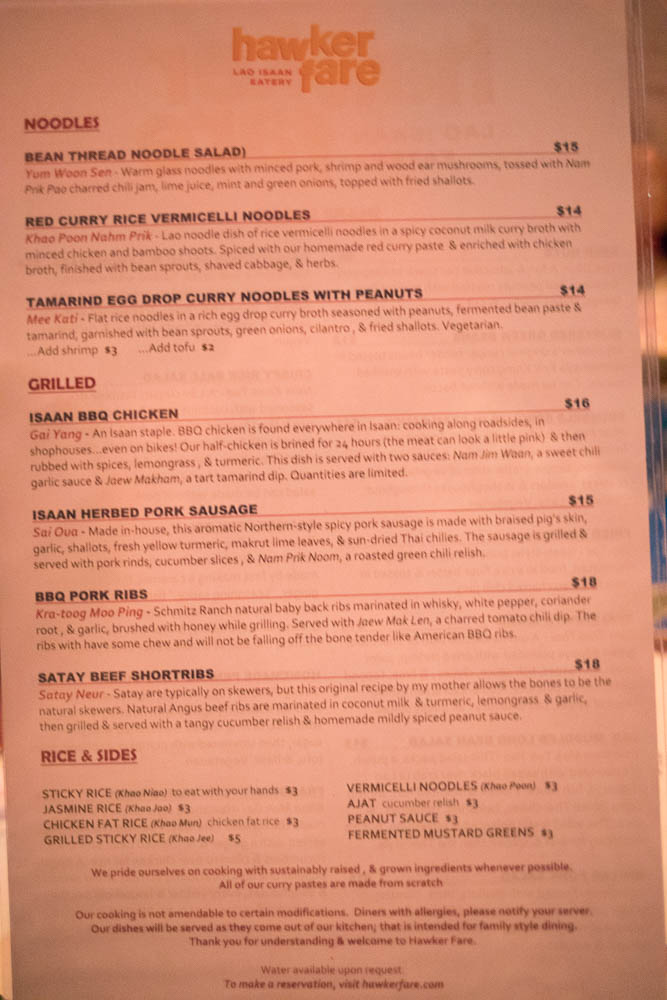 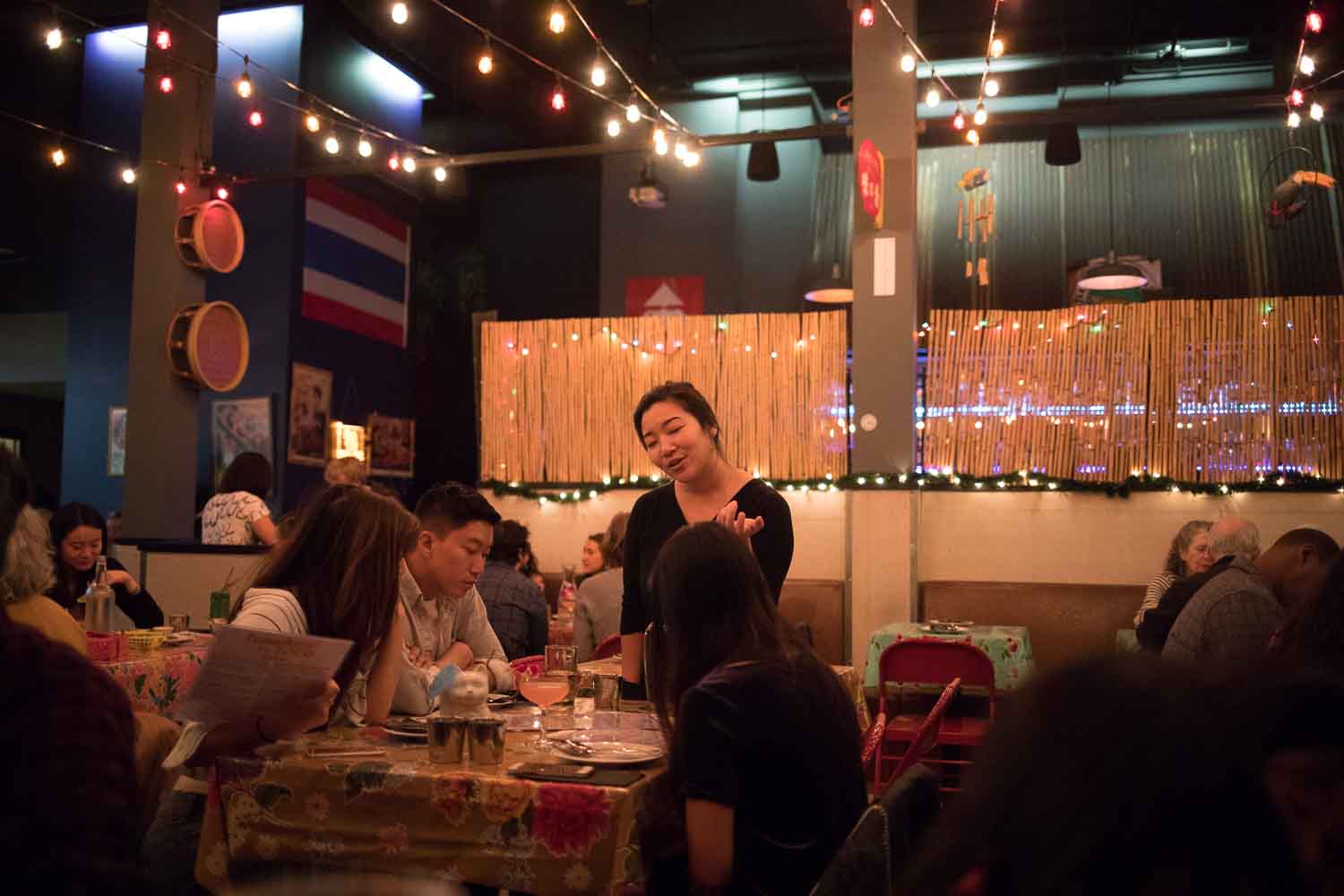 I don’t even have 3D glasses and this is a dizzying drink menu.

It’s been several months, but I remember the fried chicken and the blistered green beans being good. I felt the Hainan chicken rice was decent but you can get the same dish for similar quality and a lower price at lots of places around SF now.

As for the Yelp reviews, I suspect that they are in a minefield:

Couple all that with the usual Yelp nonsense and you have a perfect storm dragging down the average.

The mee kati I’ve had elsewhere definitely used coconut milk and it looks like this one does also.

I lived within walking distance but never went, probably because of the prices.

The ‘Syhabout’ surcharge then. But to be fair, all diners seem to demand lower price in cuisines from Asia. If this is a Californian joint, then the price won’t seem high. Although they do have folding chairs…

The Oakland location’s rating wasn’t much better. At some point hovered around 2.5 too. I came across reviews from a couple of users here and they weren’t favorable also.

I was probably one of those who didn’t like the Oakland Hawker Fare. Especially compared to Daughter Thai Kitchen, the Issan fare was really mediocre. No depth of flavor and the other dishes were heavy on the sugar. Only really good dish was the yellow curry mussels; the mussels were sensationally fresh and sweet - really top notch.

But I’m not a Syhabout fan. Been to Commis and went to whatever-it-was-before Old Kan, both with groups. Disappointed every time with his restaurants.

Price isn’t a concern for us. We just don’t think he delivers consistently great food, considering the press he gets.

I do appreciate that he helped put Oakland dining on the map of “worth crossing the Bridge for”, however!

the Issan fare was really mediocre

There is a good point there that my post title wasn’t very tight. KMG isn’t Isaan. Though the other two dishes are Lao/ Thai, I think. Which dishes did you not like?

Sorry it took me so long to catch up to your question. Here’s the blow-by-blow I wrote up after our 6-person group dinner:

Blistered Green Beans: If Syhabout thinks this is a personal original from his mom (per his menu description), he must never have had Chinese cooking (which is virtually impossible). It’s a SE Asian variant of Sichuan Spicy Green Beans. The technique is identical with its double-frying. The curry flavor is understated; most of what flavors this dish is smokiness and a moderate chile heat. This is always one of my favorite dishes, as the double-frying ensures the beans have that fully-developed flavor I prefer, while still retaining some crunch in the texture. It’s a lot better than the version most Chinese restaurants make nowadays. I’d order this any time. Hawker does a well made and delicious version.

Fried Chicken (Gai Tod) Thai style: The other four people enjoyed this. Spouse and I found it pedestrian, the usual oversweetened KFC-type dish. The chicken was heavily battered, the sauce bright red and goopy-sweet. The chicken wasn’t overcooked, but all one could taste was crunchy flour batter and sweet sauce. There’s some spice, but it’s relatively mild.

Lao Papaya Salad (Tum Mak Houng): This papaya salad is still balanced & refreshing, but it’s funkier and spicier than the Thai-Style (which is still on the menu). The dressing is thin and somewhat soupy on the thin rice noodles and shredded green papaya. The waitress gave us a warning about the “funk” in this dish but truthfully, with all the sugar and tamarind in the dressing, even the most timid diners in our group were fine with it.

Grilled Mushroom Salad (Naam Tok Het): Everybody enjoyed this vegan dish, although it is reasonably spicy - about a 4.5 on our personal scale of 10. I preferred it to the papaya salad, but I’m not really a fan of the latter. If you like mushrooms and can take the heat, this is worth ordering.

Crispy Rice Ball Salad (Nam Khao Tod): We had this dish at Vientian Café in July 2014. Vientian does an outstanding version, full of tasty crispy, toasted bits of rice. Hawker Fare’s dish came in two parts: three unbroken butter lettuce leaves and a few cilantro leaves, then a small plate containing a heap of soft-looking rice. There were a few toasted bits, but it was 97% soft, underseasoned rice. An indifferent dish and we wouldn’t recommend it. Almost all the Laotian restaurants in Oakland make this much better than Hawker Fare.

Mussels Steamed In Coconut Milk: A very nice, spicy yellow curry, with absolutely no sugar. We’re not mussel fans – we’re okay with them but they’re never our shellfish of choice. But these were super-fresh and sweet – in fact, so sweet at first I thought there was sugar in the curry! If you enjoy mussels, this is an excellent dish.

Isaan Hered Pork Sausage (Sai Oua): This sausage was familiar to us from Vientian Café and Camber Montclair…and again, both those places do a much better job than Syhabout. It’s a fatter sausage than you’ll find at most competitors. Syhabout’s seasoning is muted, and even the nam prik noom dip seemed spicy yet a bit flat.

Satay Beef Short Ribs: This is a nice dish…but it’s always a nice dish, whether you name it Korean bulgogi or Japanese teriyaki or Chinese red-cooking. The beef is sliced very thin, in a similar manner to Korean short ribs, but cut in smaller pieces about 2x1". If you can tell it’s Angus beef after that marinade - Syhabout doesn’t mention sugar but it’s definitely there - your palate is better than mine and Spouse combined. It didn’t taste much different than what you’ll get at any Korean or Japanese restaurant. There was more meat on the bones than at Fusebox/Oakland, but that just means the entire Hawker Fare dish held about 3 oz. of actual meat after subtracting the sliced bones.

Sticky Rice (Khao Niao): Hawker Fare sends out a small handcrafted bamboo container. Looks great, until you pull off the top and find the sticky rice packed tightly into a clear Baggie. The container is so narrow it’s hard to get the rice out. The rice seemed as if it was sitting around for a while. Sticky rice gets hard fairly quickly as it cools, but Hawker’s hardened a lot faster than mine does at home.

Chicken fat rice (kao mun): The chicken fat is lightly applied and subtle in flavor. Most of the group found it no difference than regular rice. I liked the subtlety of flavor, because most of the food here is flavor forward.

Note: re the Crispy Rice Ball Salad (Nam Khao Tod). We ordered this on our first visit to Daughter Thai Kitchen in March 2017. There is no comparison to Hawker Fare’s mediocre version. The NKT at Daughter Thai was outstanding - not just super-chile hot, but with an amazing complexity of spicing.

here’s a review i wrote back in August, but for some reason didn’t get published until Saturday. i went again a couple weeks ago, and repeated some of these dishes. all stellar, still.

here’s a review i wrote back in August, but for some reason didn’t get published until Saturday

Well, if you didn’t tell us, I wouldn’t be able to tell if the pictures were from Saturday or last August. Its that warm.

good thing the food is all-weather.

Gai yang/ Isaan bbq chicken. Chicken was moist and had good grilled flavor. The best part was the two sauces- the nam jim waan- sweet chili garlic sauce, which was at once sweet and slightly spicy, and the jaew makham, tart tamarind sauce. Couldn’t stop dipping the chicken in there. Took the sauces home for another meal of my own chicken. 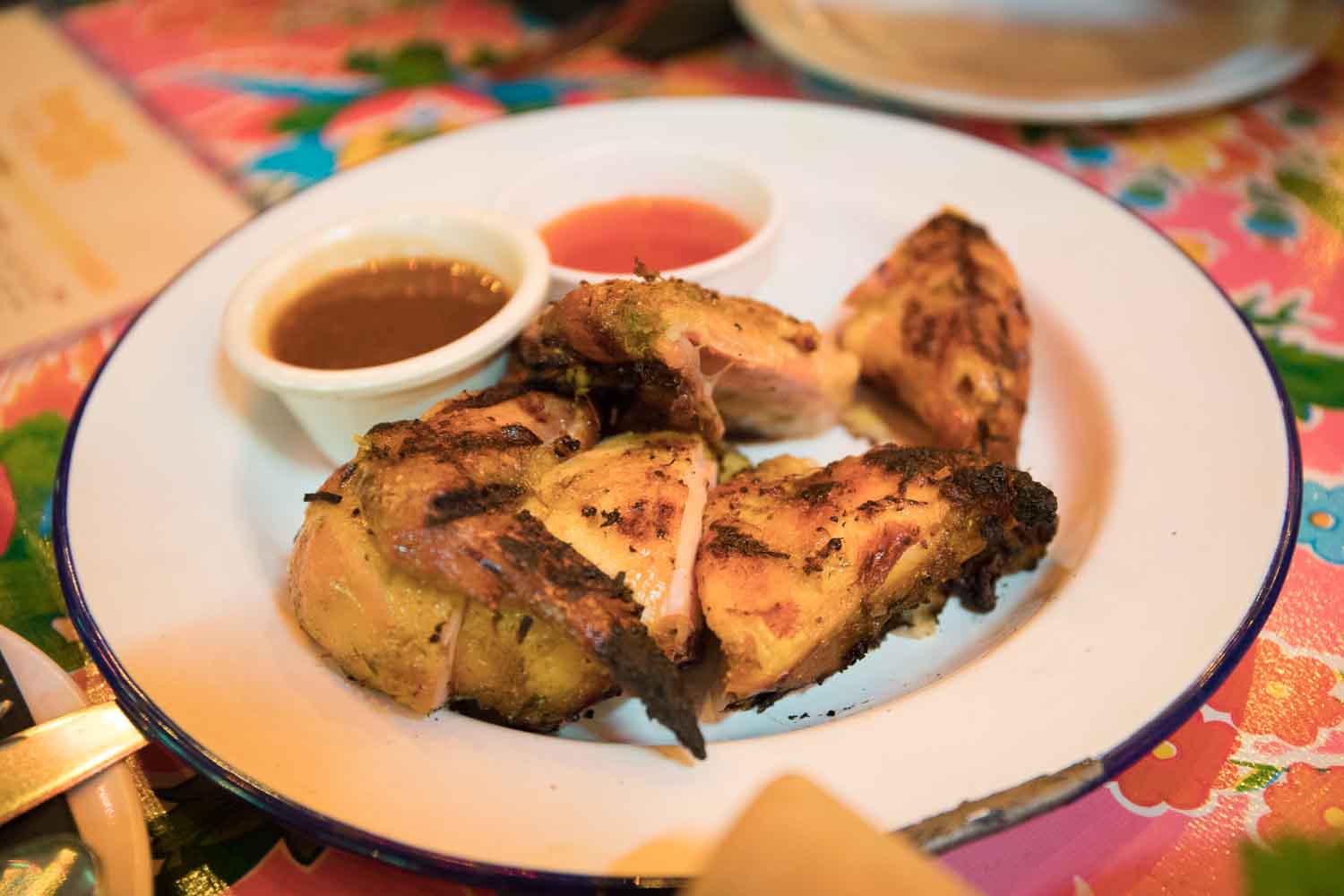 Khao poon nahm prik/ red curry rice noodles: Not really spicy despite the server and the menu saying its spicy. Nice curry and coconut flavors to make the rice noodles more aromatic. The wife said its bland and that they forgot to add salt, though it tasted just fine to me. 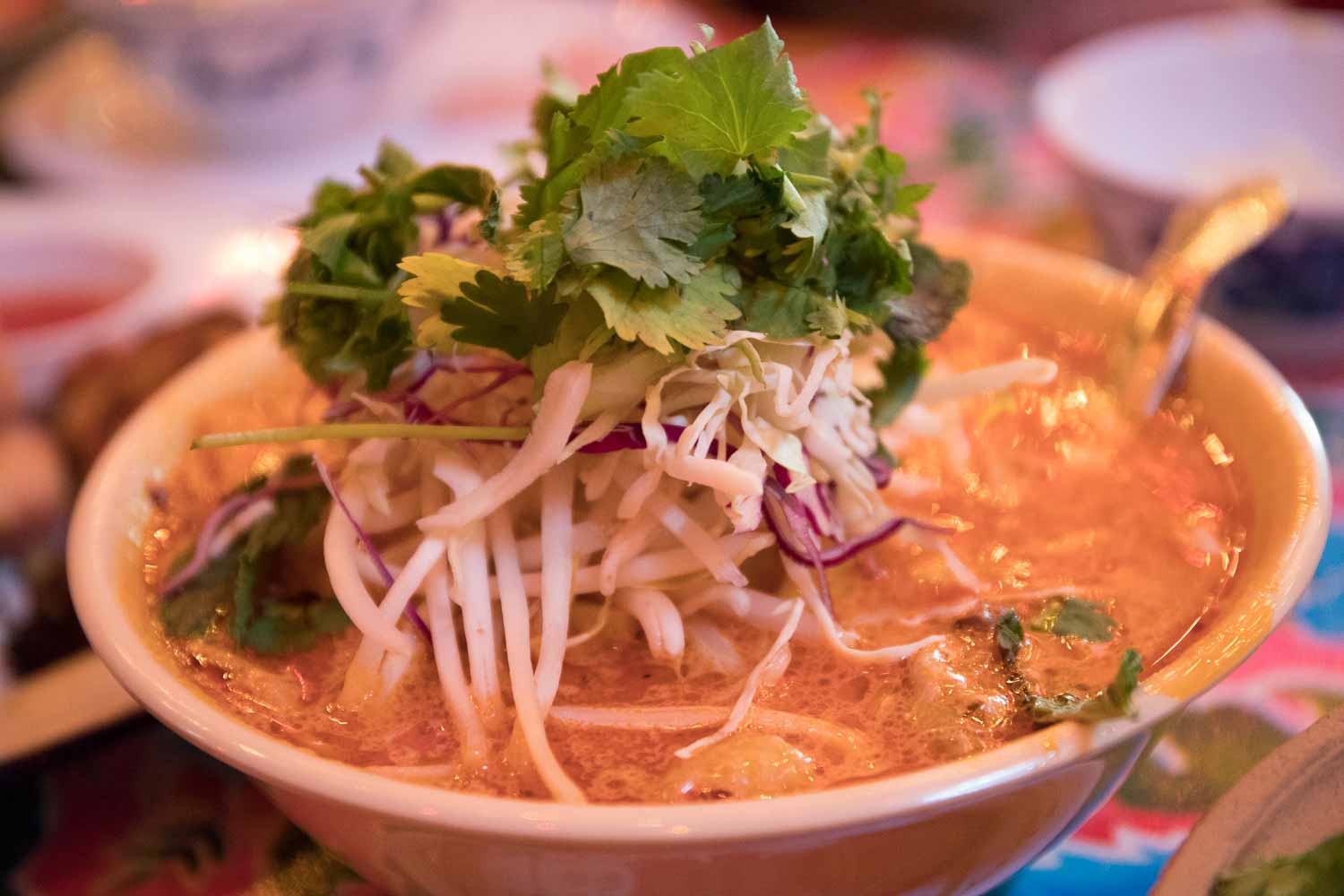 Again had the Dtom kiem/ braised pork belly. Fine as usual, though July was not the time for mustard greens, or most greens in general, as the mustard greens were a bit fiber-ish because of the hot weather. 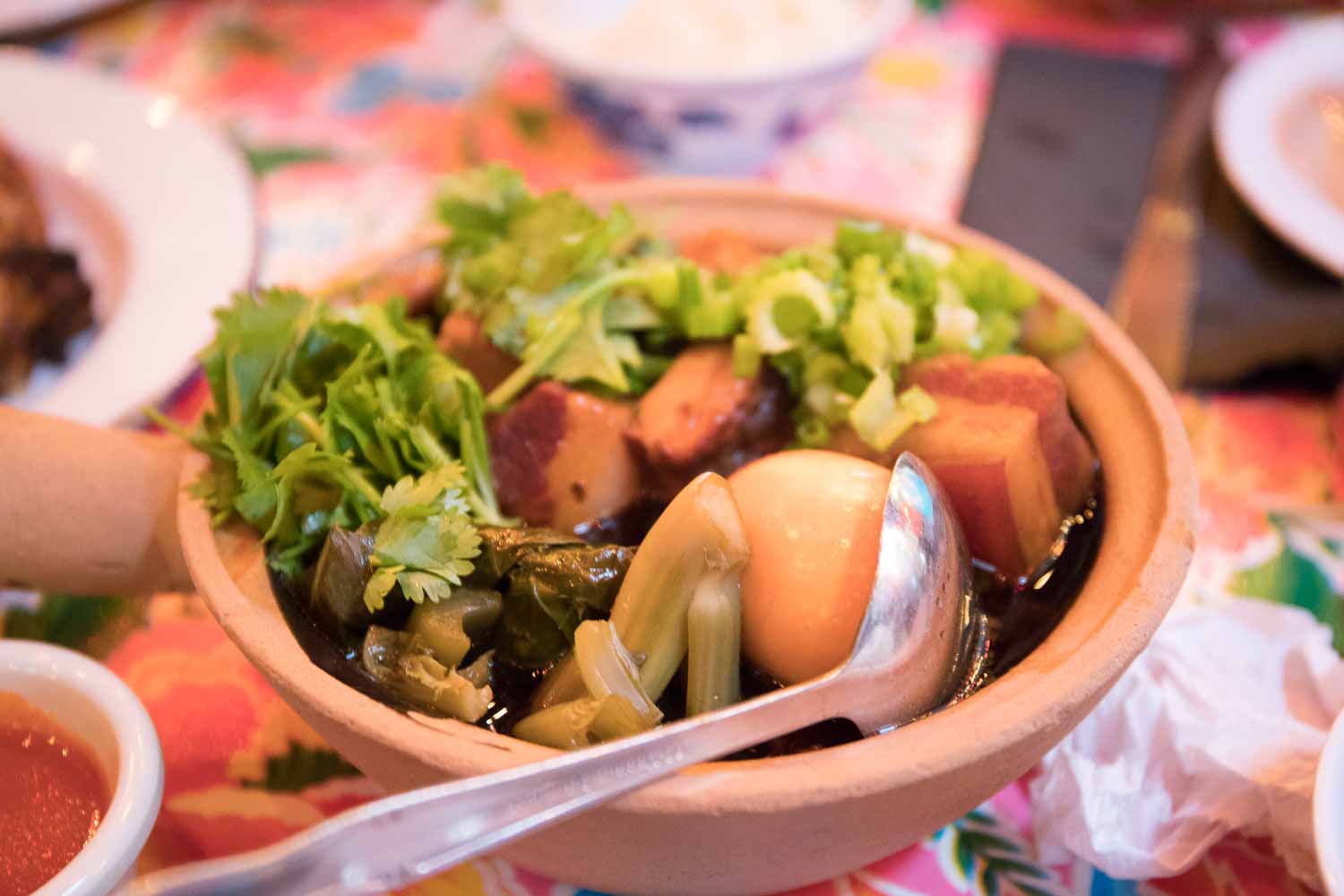 Still don’t understand why its only 60-70% full on a Saturday evening between 6-7p. Do people eat late in the Mission, or are we just old? 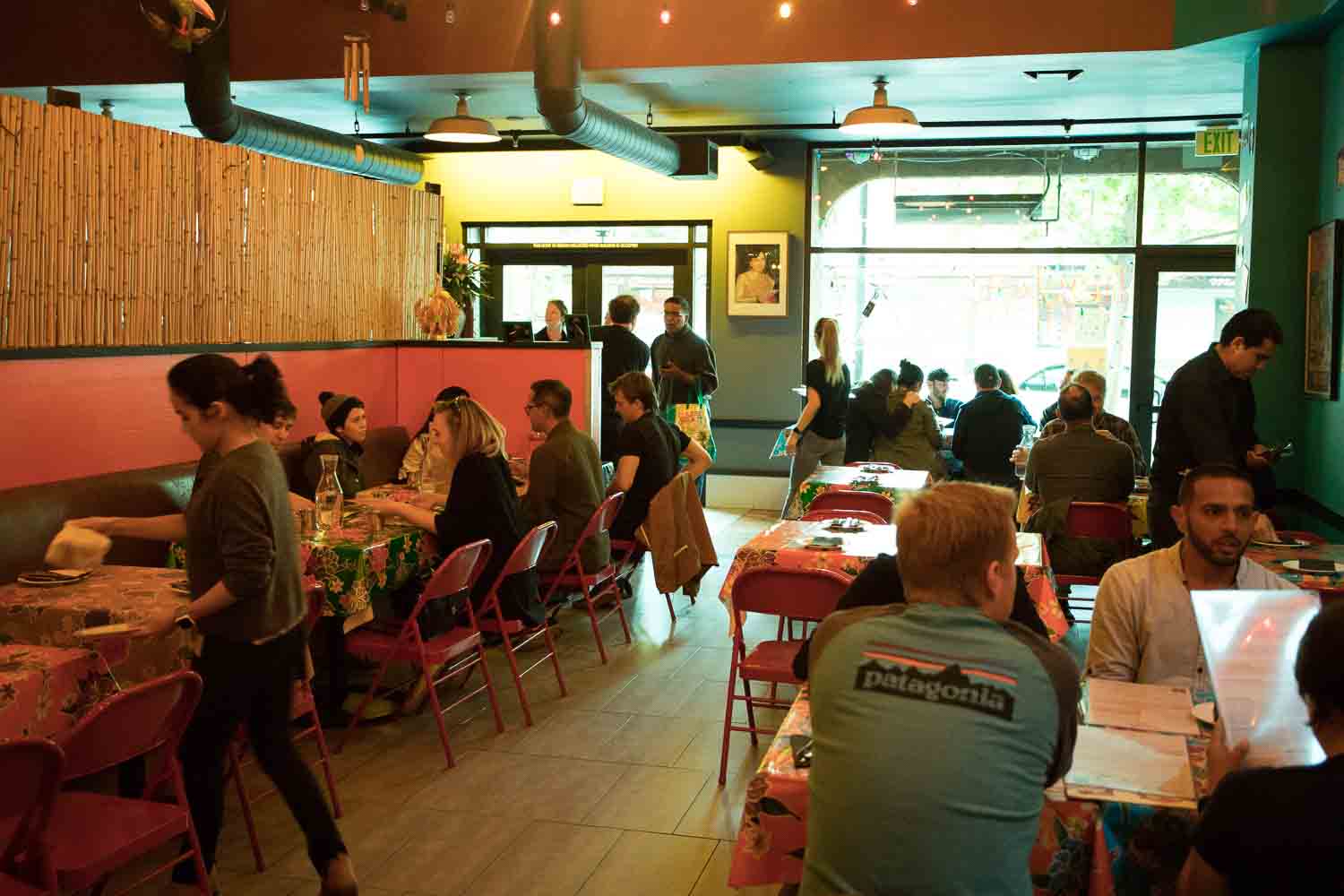 Every time I walk past Hawker Fare I keep pondering why I don’t go here more often. I had a nice solo late dinner here on a warm pre-Labor Day Sunday.

Had a Tropical Storm ($14) to drink.
Copalli Rum, Mango, Pineapple, Splash of Hibiscus
Pretty good, could have used a touch more sweetness. 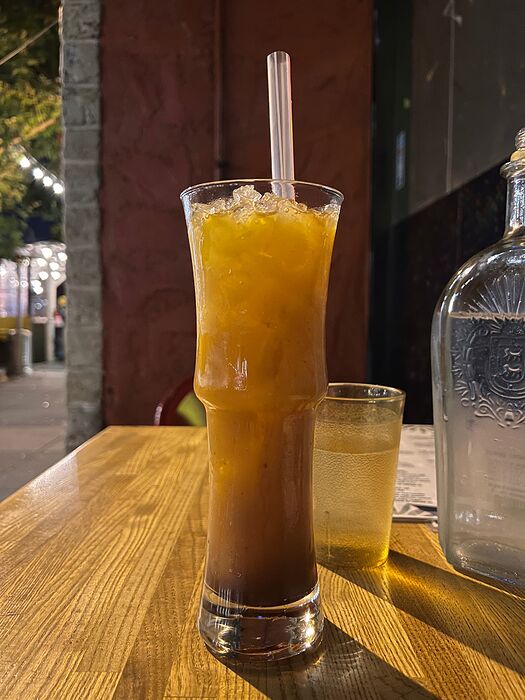 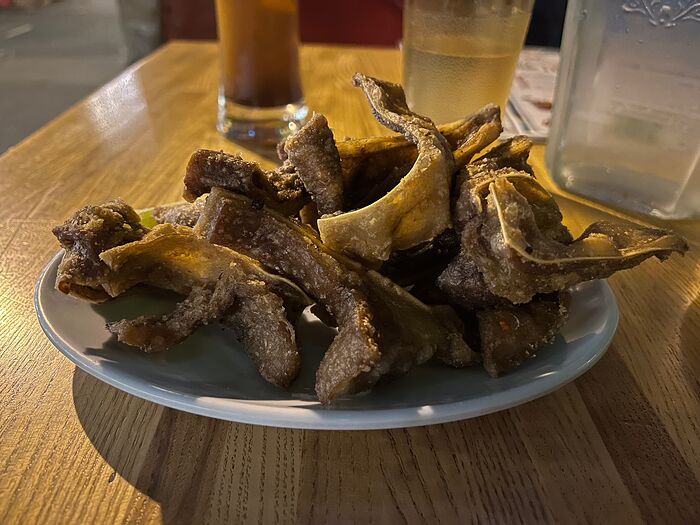 And also the
VERMICELLI NOODLES ($16)
“Khao Poon Nahm Prik” - Lao rice vermicelli noodles in a spicy coconut milk curry broth with minced chicken, bamboo shoots, bean sprouts, shaved cabbage, & herbs.
Also very good. The rich coconut soup had a lot of makrut lime/lemongrass(?) flavor. I ordered it with catfish (+$4) but I think they put in shrimp instead. No biggie, the shrimp were nicely cooked. 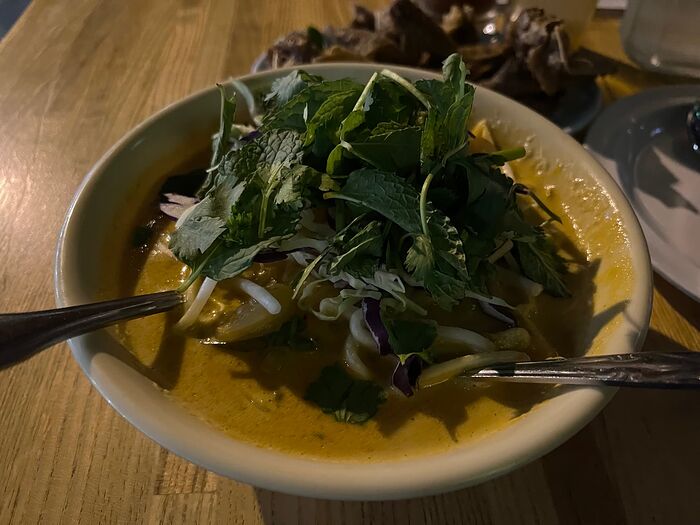 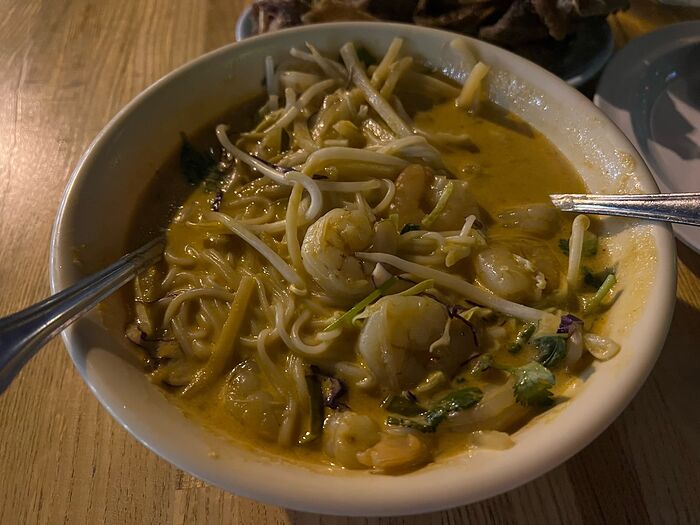 They have a parklet and tables outside. 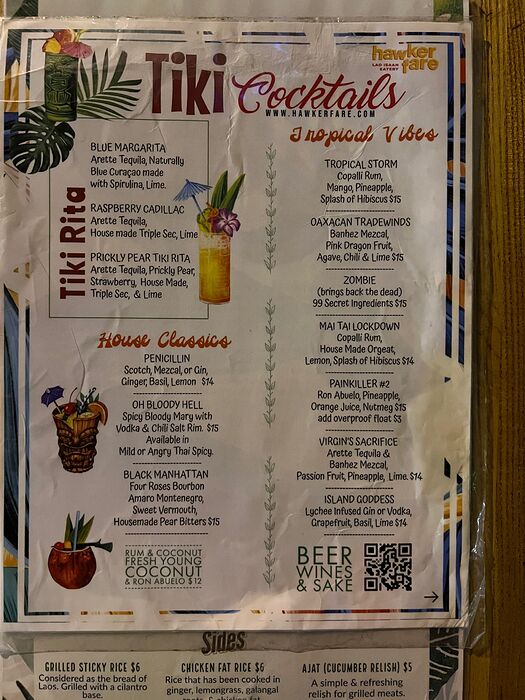 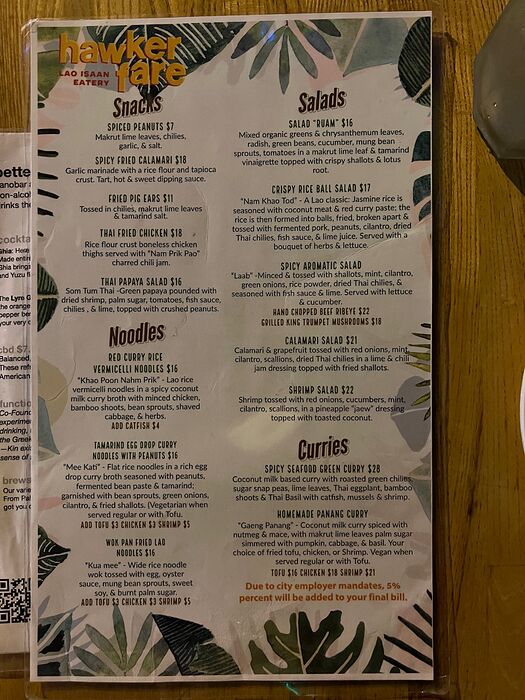 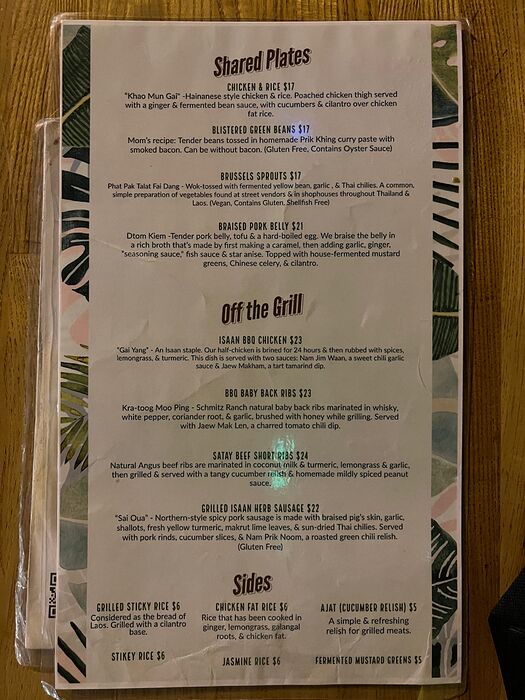