I had lunch at Farmhouse Kitchen in the Mission on a Sunday. I ordered the Hat Yai Fried Chicken ($19.50), which comes with an interesting looking blue rice, roti, and a yellow curry sauce that had some chunks of potato in it, along with a spicy honey(?) dipping sauce for the chicken. Described on the menu as “Thai Southern style.”

It was good. The blue rice looked pretty but didn’t really taste different from regular steamed jasmine rice. Chicken was well fried with a crispy shattering crust. Extra bits of the crust were on the plate as well for munching on. The chicken itself (Mary’s) was moist despite being white meat, very good with the dipping sauce. Roti was a little too dense and compressed, could have maybe been a little flakier. The curry sauce on the side was good, a little on the sweet side, and lukewarm. 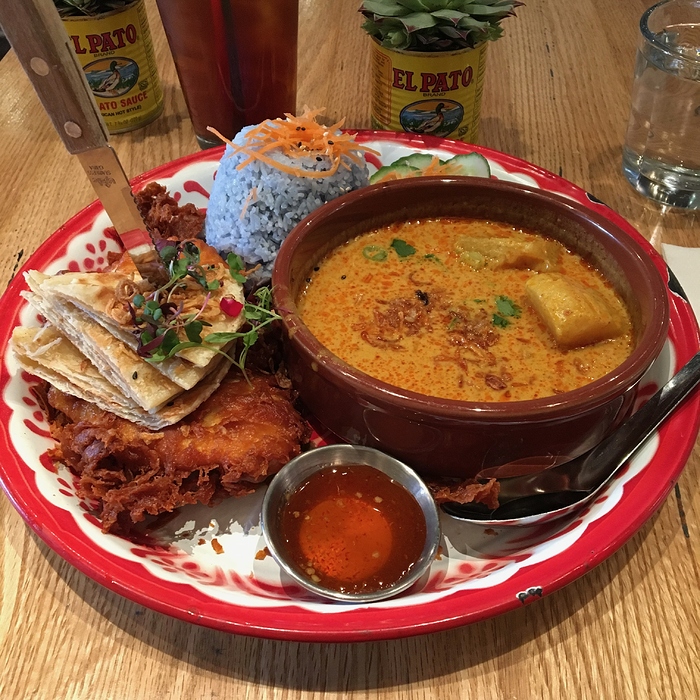 Any idea where the blue color comes from?

We order in from them every other Sunday and I always go for the fried chicken. It delivers well (hot, crispy, not too oily) and it’s always consistent. I find the little sauce they give you (not the curry) way too sweet. I always toss it and use the curry as a dip, which works pretty well. It’s a touch on the sweet side. Anyhow, my wife likes their herbal rice salad a lot. Their 24hr beef noodle soup is pretty good too. I imagine the Panang Neua short rib would be as well. I also like the crab fried rice. There’s nothing that really truly excites me, but I think it’s a good, reliable neighborhood spot.

Yeah the dipping sauce was quite sweet, like a spicy honey or syrup. I liked it with the chicken though, had that combination of sweet and salty similar to eating the chicken in chicken in waffles with maple syrup. Thanks for the recommendations of other dishes, the beef noodle soup looks good.

Their tom kha soup is FAR too sweet, which ruins the complexity. So it’s kind of a thing with Farmhouse in general.

I haven’t been, but I keep hearing that the owners’ other restaurant, Daughter Thai, in a sleepy residential neighborhood, is authentic, fiery, etc. etc. So its interesting that Farmhouse is instead on the sweet side, in the Mission where there are real Thai restaurants.

The meat in this noodle soup came in the form of a single large bone-in braised short rib, with tender falling off the bone meat that I scraped into the bowl. Lots of meat. Noodles were of the thin egg variety, similar to what you get in Cantonese wonton noodle soup. Held the broth well. Broth was pretty good with a bit of sweetness but not overly so. A little bit of crunch from the bean sprouts and celery. Bit expensive at $23.95. 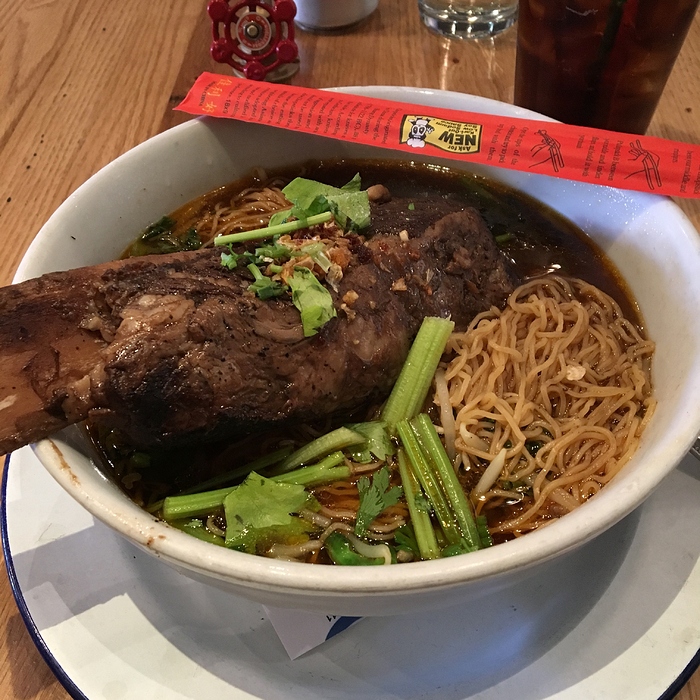