I went to Marufuku ramen in the Japan Center Kinokuniya Building in Japantown for a bowl of ramen. I’ve wanted to try Marufuku for awhile but they always seemed to have a long line and I would usually end up at the conveyor belt sushi place a couple doors down. They have a really efficient Yelp-powered waiting list system. You enter your name and phone number into a tablet at the front of the restaurant, and then it will text you when your turn is near to go to the host to check in. It also texts you a Yelp link where you can see how many people are ahead of you. If you don’t want to wait, you can also remove your name from the list through the Yelp app. It worked very well. It was nice to not have to wait around the front of the restaurant as there are lots of shops in the building to browse around when waiting. It took me around 30 minutes to get in on a weeknight with about 20 parties ahead of me when I put my name down.

I had the hakata tonkotsu ramen ($11.99) and also added buta kakuni (stewed pork belly) (+$3.50). They have a five level spiciness option ranging from “no spicy” to “ultra spicy.” I opted for “no spicy” as I wanted to try the broth by itself. The broth was clean tasting and milky white with a slight layer of oil, porky, not too salty, not too fatty, not very msg tasting. Rich and lip coating but not very thick. Very good broth with a little bit of sweetness to balance the saltiness. I finished the broth. The vegetable complement was green onions, bean sprouts, crunchy thinly sliced wood ear mushrooms, menma, and a little bit of thinly sliced red pickled ginger to cut some of the fat. The buta kakuni added was two large chunks of pork belly. It was tender, with the meaty part not meltingly tender but pretty soft. Nice mix of fat and meat. Noodles were thin and straight which I believe is typical of the Hakata style. They were good noodles but could have maybe been a touch less done. I think I just prefer firm noodles. A good quantity of noodles. You can actually add an extra serving of noodles if you are very hungry for an extra $2. The chashu was fine, thinly sliced. The marinated egg was hiding under the noodles. It was well cooked, soft boiled and runny in the inside.

This is the best tonkotsu based ramen I’ve had in Japantown (I’ve only been to Yamadaya and Waraku for comparison though), and probably the best tonkotsu based ramen I’ve had in SF in recent memory. For reference, other tonkotsu bowls had recently were at Ramen Underground (mediocre) and Iza Ramen (pretty good), and a bit further in the past, Orenchi Beyond (pretty good though kind of skimpy with the toppings). Will be back to try their tori paitan, and maybe if I get there early, their tori paitan dx which has a chicken leg on the side and of which only 15 are made a day. 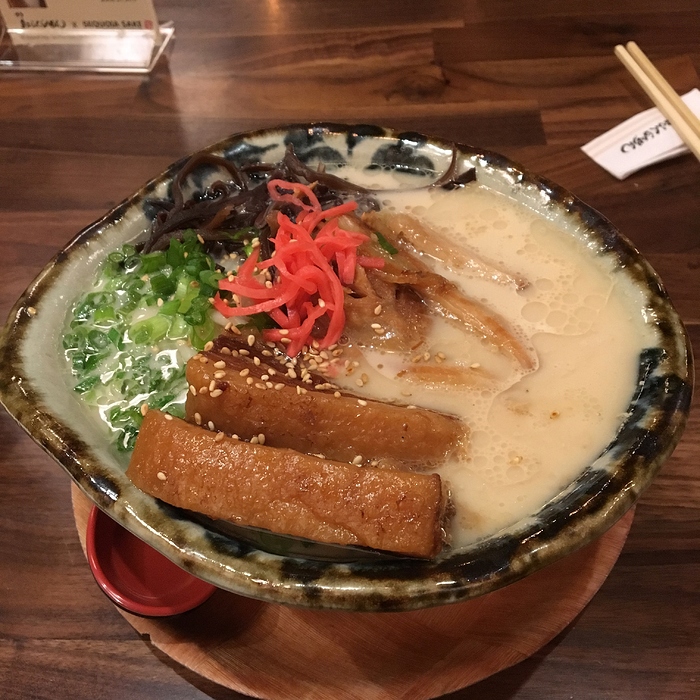 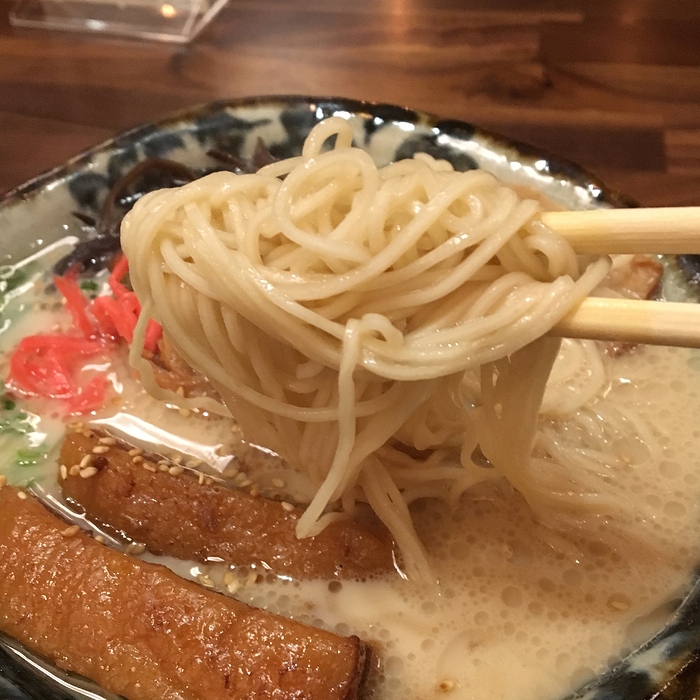 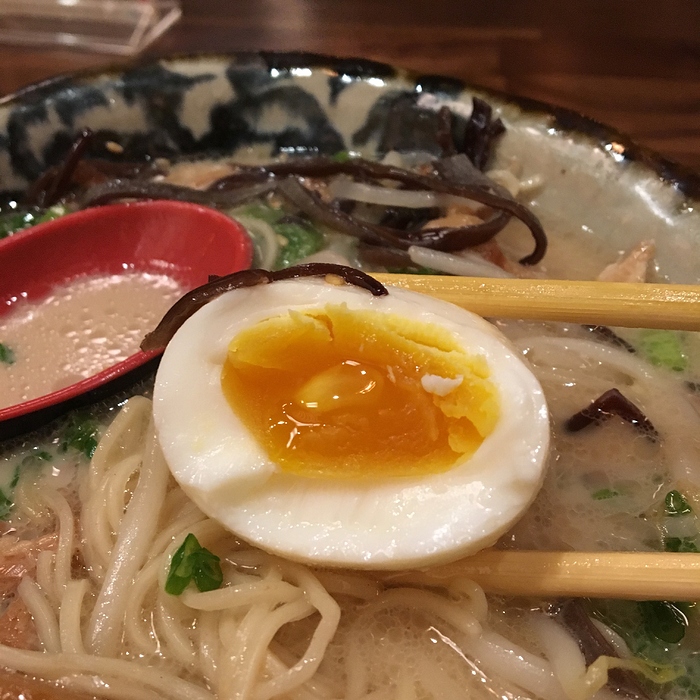 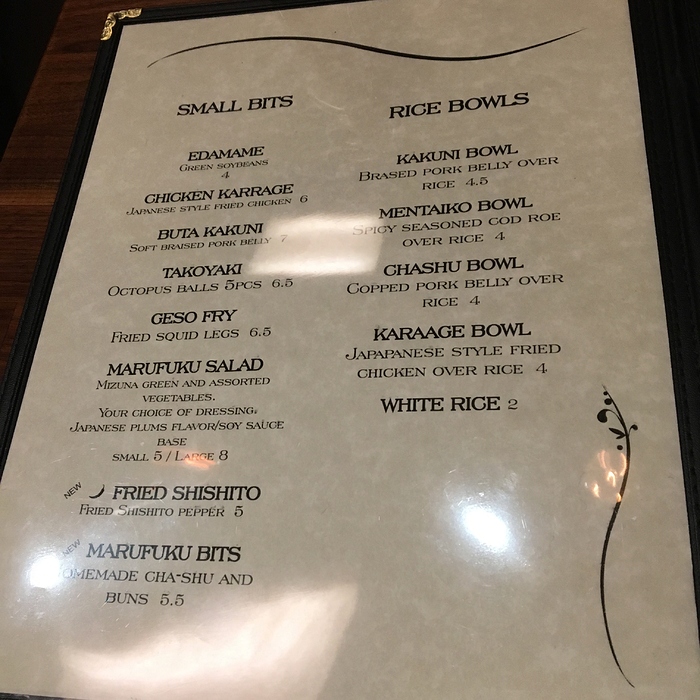 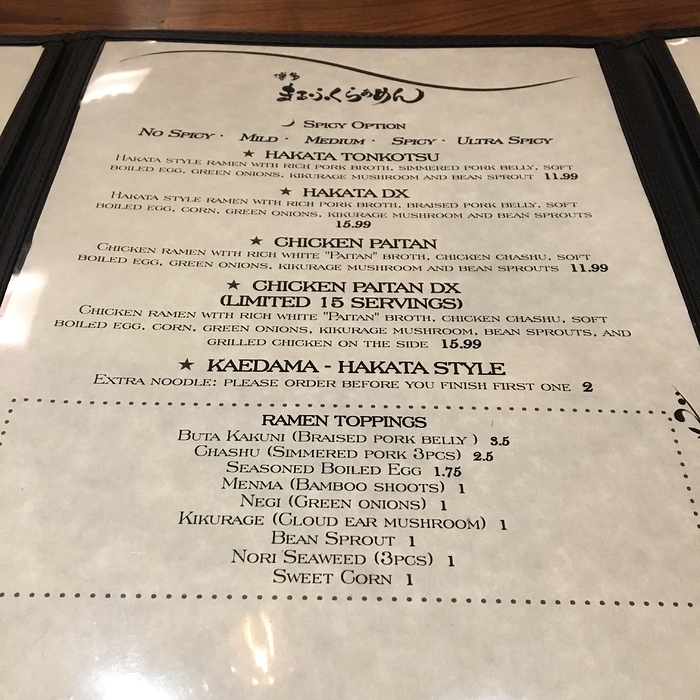 We also like the ‘small bits’ of Karaage, gesso Fry, and takoyaki.
Service is always friendly and efficient.