Had dinner recently at Nightbird, a restaurant in Hayes Valley from chef and owner Kim Alter. I’d had an excellent dinner at at the now-closed Haven in Oakland quite a while ago when chef Alter was running the kitchen there, and so was keen to try her solo venture, which has been open for a little over a year. Nightbird has a prix fixe menu at $125, with no a la carte menu, and an optional wine pairing for $75. They also had a caviar course that night for an extra $75, but we didn’t partake.

The menu had the theme of “I left my heart in…” and featured dishes that were inspired by locations in San Francisco. Very creative!

Dinner started with an amuse of a soft boiled quail egg on top of some crispy fried leeks, topped with a hollandaise sauce. Delicious. The velvety hollandaise was particularly nice. 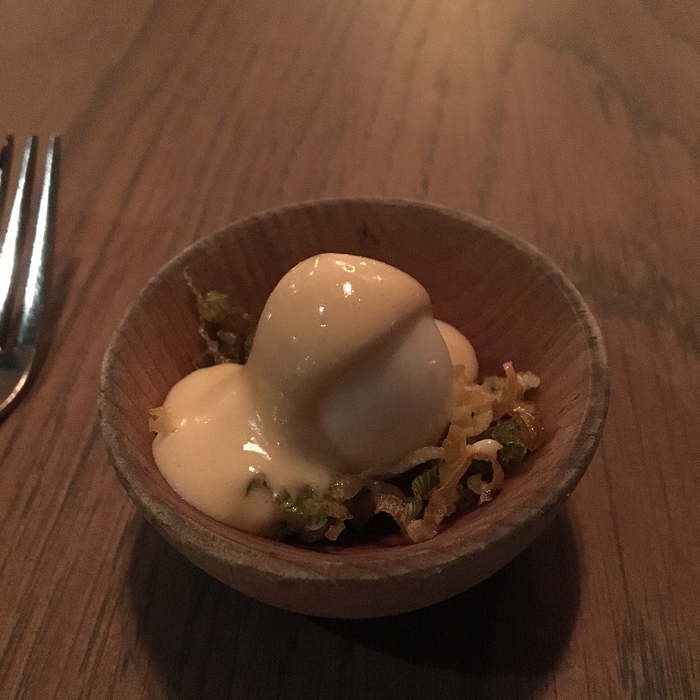 The first bread course was an epi bread. Warm, crusty. 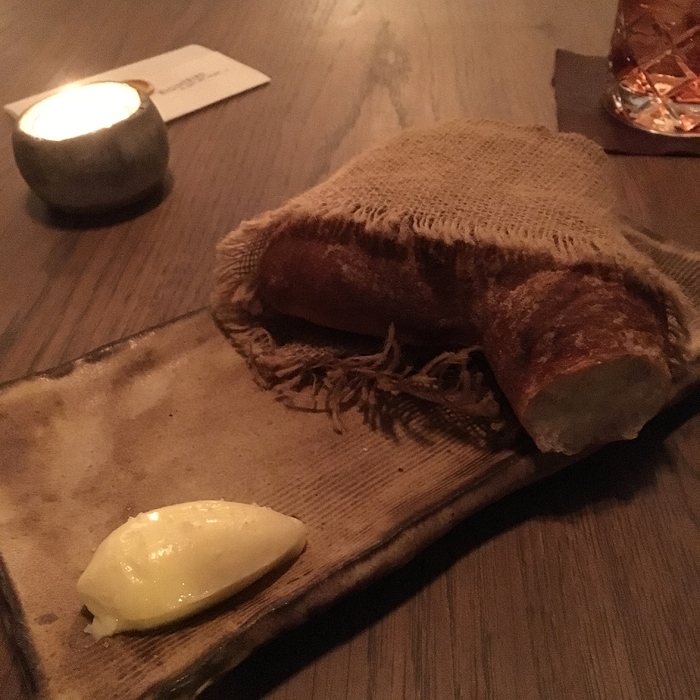 The first proper course of the night was a dish inspired by the Ferry Building and the Ferry Building farmer’s market. It was a grilled avocado half encrusted with black sesame seeds, with some greens, sliced radishes, and a yuzu reduction. There was a bit of creamy green sauce underneath the avocado as well. I thought this was fine but not more than the sum of its parts. 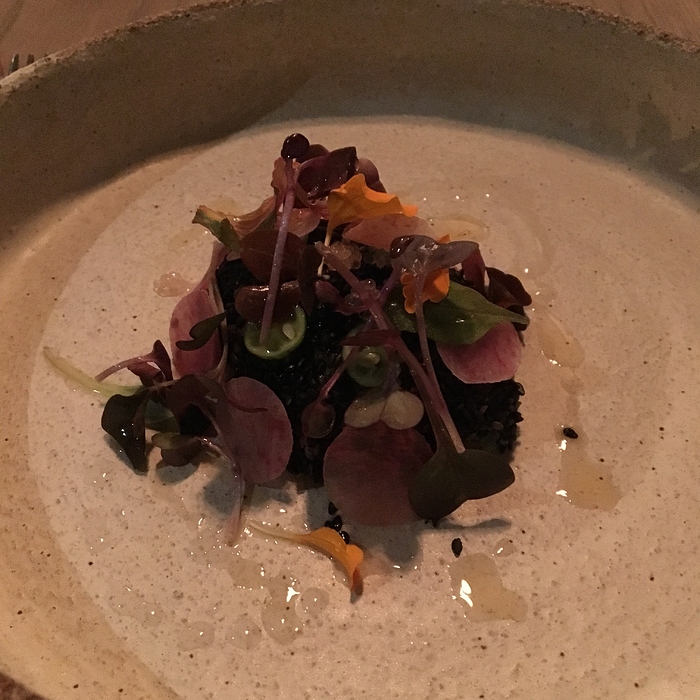 The second course was inspired by Fisherman’s wharf and that tourist staple, clam chowder in a bread bowl. It was a sourdough gnocchi with a creamy sauce with some bone marrow, and clams. Topped with a few crispy bits. This was delicious. It really did capture some of the clam chowder in a bread bowl essence. The sauce plus the plump briny clams evoked the taste of clam chowder, and the tender sourdough gnocchi recalled the flavor of a sourdough bread bowl. Nice texture on the gnocchi. 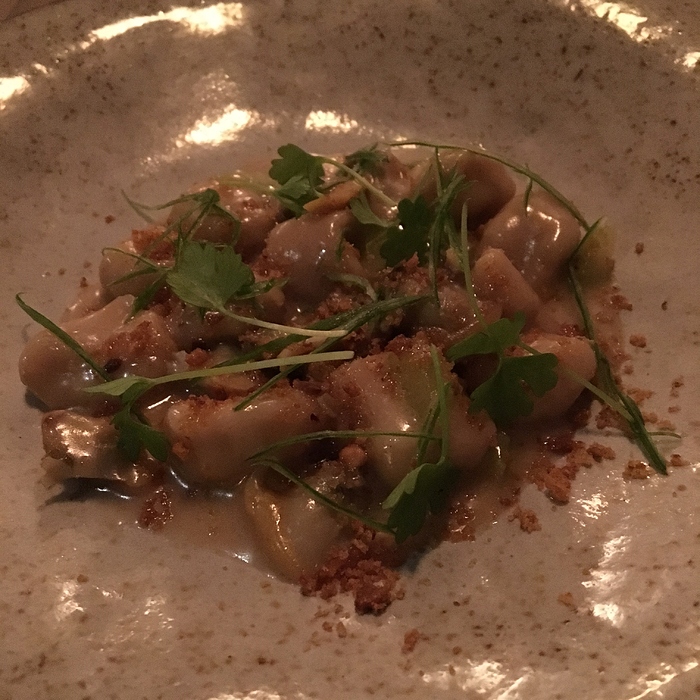 Next was a second bread course, a fermented sourdough rye with cultured butter. Excellent bread. Warm and crusty with a quite sour interior. I liked this better than the epi. 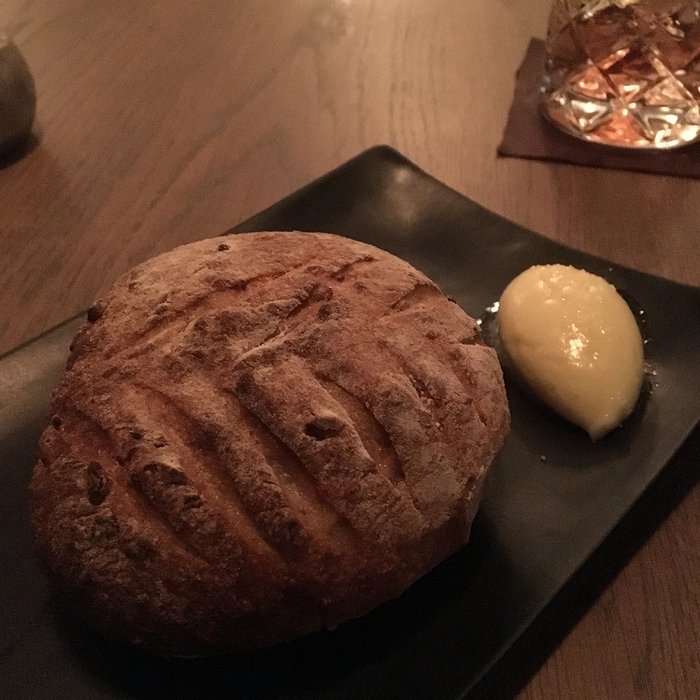 The next course took inspiration from Zuni Cafe and their signature dish - roast chicken with bread salad. Chicken rolled and stuffed with foie gras, with bread salad, potatoes, and a crispy piece of fried chicken skin. The chicken rolls were lightly covered with a very nice sauce, tasted kind of like a reduced chicken broth. I’ve been to Zuni a few times but have not actually had the chicken there, although I have the cookbook and have made that recipe at home before. This was like a much fancier version of that dish. It was really good. The chicken rolls were tender and flavorful with a crisp outer edge and a rich foie gras center. The bread salad on the side was dressed with a sweet and sour vinaigrette and raisins like the Zuni version. 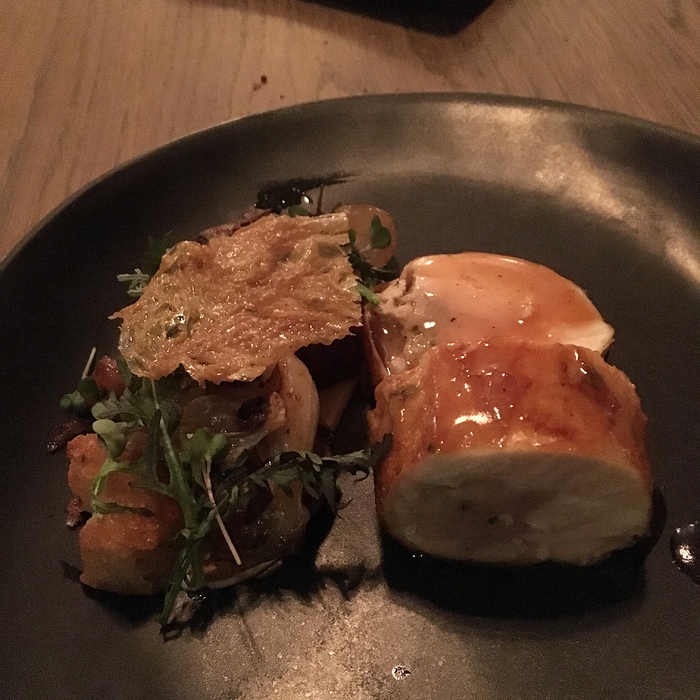 Next came the last savory course of the dinner, inspired by Chinatown and the dish of beef with broccoli. Beef tenderloin with broccoli, with a kimchi reduction. I usually go with ribeye or New York strip when ordering steak over the tenderloin as they usually are beefier though not as tender as the tenderloin, but this steak had lots of both beefiness and tenderness. The kimchi reduction sauce was nice, I think it had a bit of fish sauce in it as well. 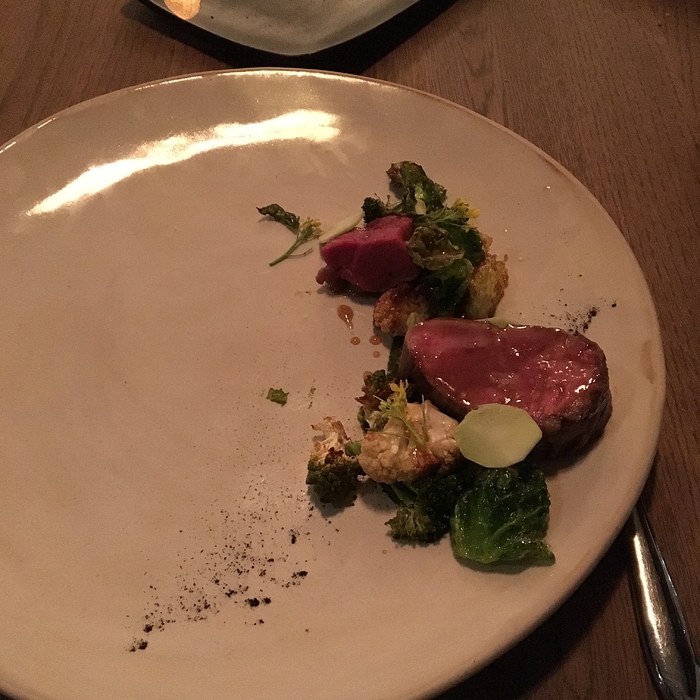 A grape sorbet as a palate cleanser. Nice smooth cold sorbet (with a bite taken out of it before I remembered to take a picture). 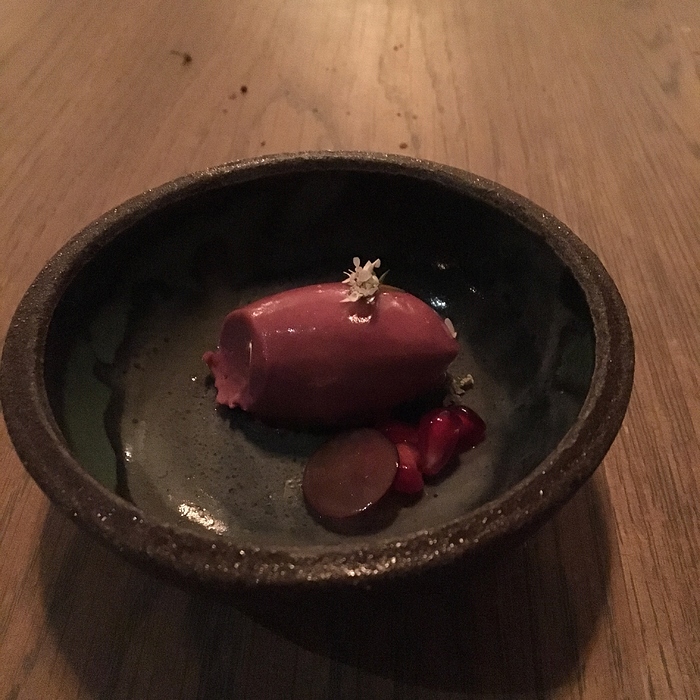 Dessert was inspired by the Buena Vista Cafe and their famous Irish Coffee. I forget which component represented the coffee, Irish whiskey, and heavy cream, but it was good. 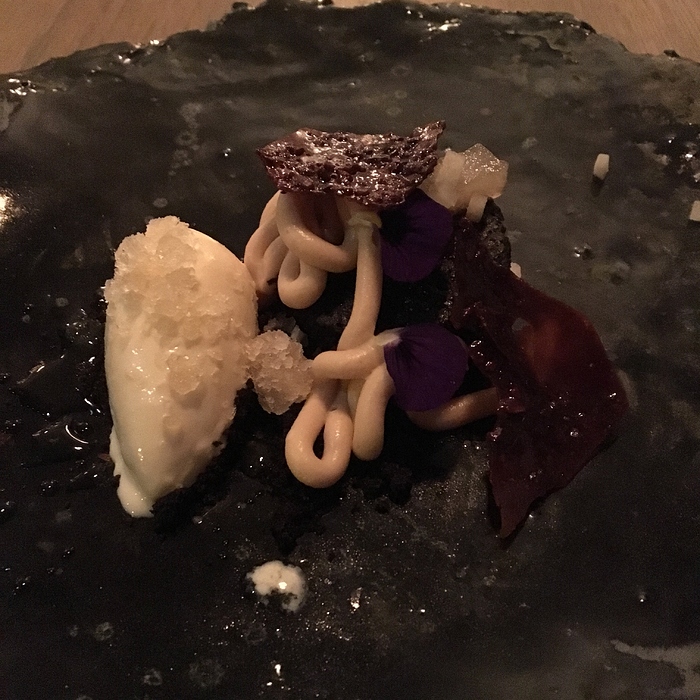 And then some more desserts! Chocolate ganache that tasted like a nice piece of fudge, a chocolate truffle, a salted caramel that had some kind of fruit in it, and something that resembled a chocolatey Rice Krispies treat. 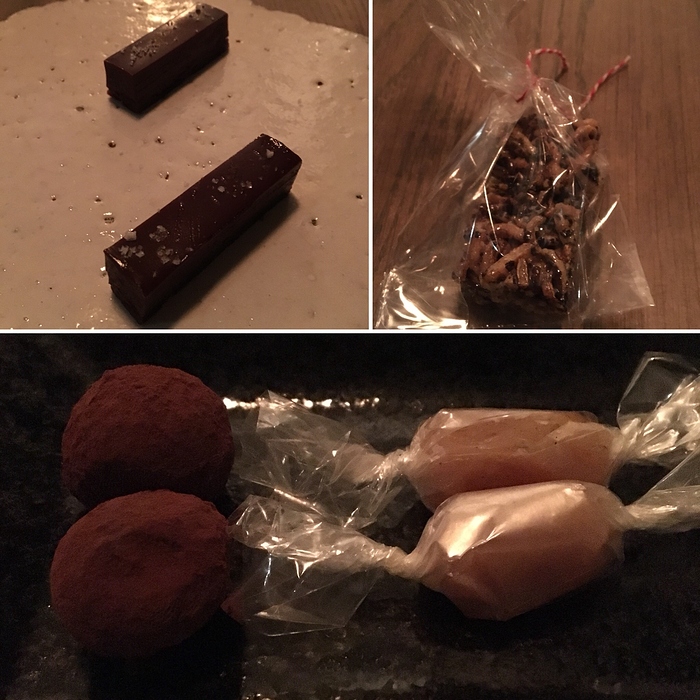 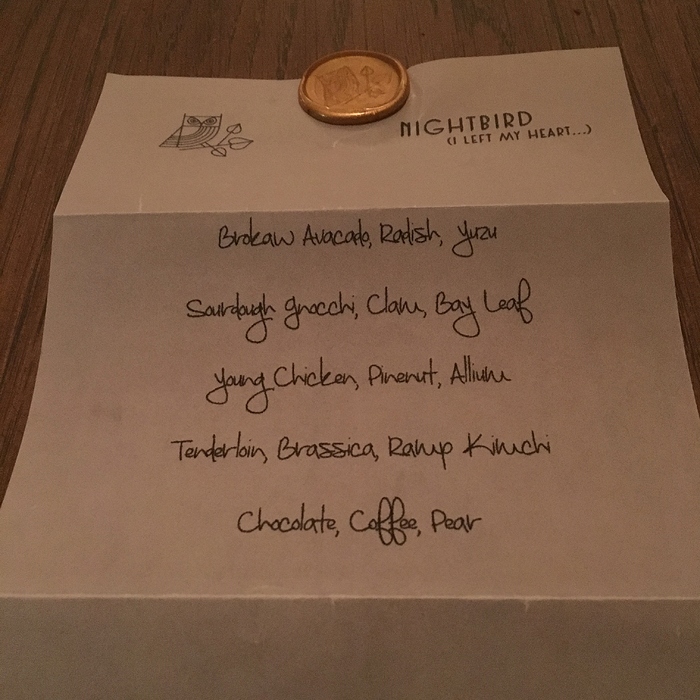 16% of the bill is added as a service charge. I really enjoyed this meal. I loved the theme and the playful creativity.

Sourdough gnocchi, hmmph, so they make the gnocchi with a sourdough starter?

Since Kim Alter said Septime’s nightly changing prie fixe (and perhaps other elements) inspired Nightbird, I am curious what may be the similarities. Has anyone been to Septime?

I have. i can see that! just small, spare, clean, pretty, inventive dishes. i went for lunch, and we loved it. i think it was something like $75 euros for lunch (Oct. 2016)

this makes me want to try Nightbird.

nice review, thanks - must try.

I went in January and had a really wonderful meal. I always enjoyed Kim Alter’s cooking at Haven and this was a bit more special, but just as good.

I suppose you could say the broccoli beef did double duty – representing both Chinatown and the Tenderloin.