Rooster & Rice is a mini-chain (with three locations currently) of restaurants in San Francisco that specializes in khao man gai - the Thai dish of poached chicken with rice cooked in chicken fat, served with a soy based sauce and a side of chicken broth. Recently it was announced that they will merge with similar, newer local chain Chick’n Rice (started by some of the founders of delivery service Caviar) to form an even bigger khao man gai empire: 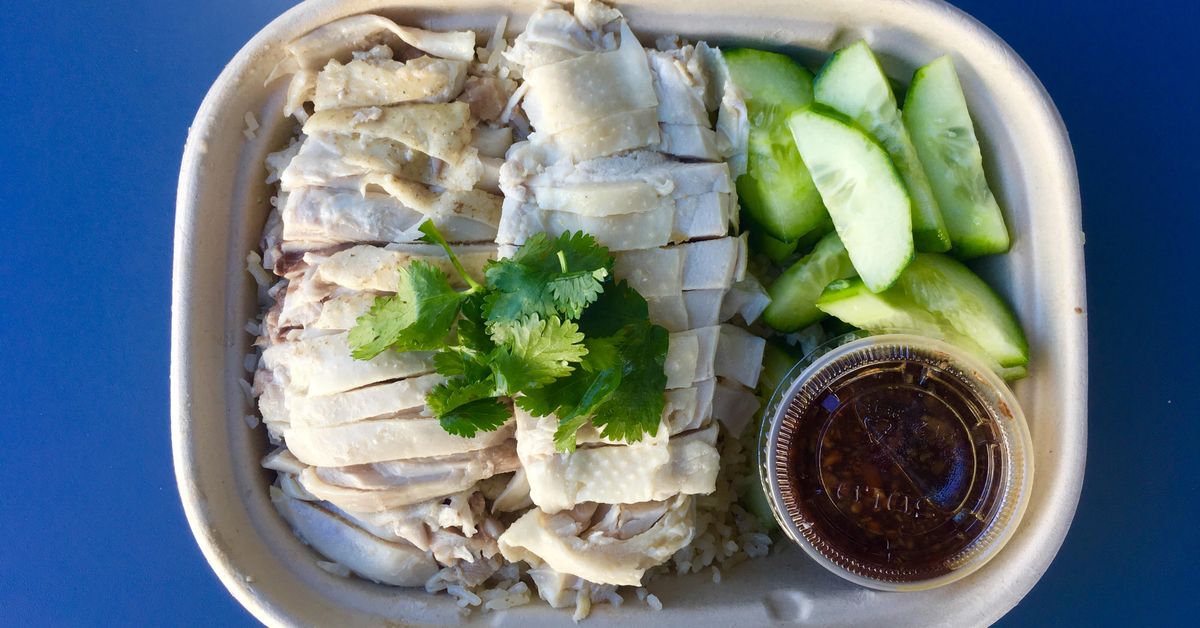 I’ve had dinner a few times recently at the FiDi location, so here’s a report.

They have a very simple menu - a few variations of khao man gai, with a tofu option as well for vegetarians. Among the options is the amusingly named “Marina” - a version with skinless white meat and brown rice, which does in fact sound very suited for the Marina crowd. Their original location is near the Marina in Cow Hollow.

You order at the counter and pick up your food when your number is called. I usually get the classic, with dark meat only. Sometimes with vegetables (broccoli) on the side to increase the healthiness. All of the dishes ordered on the premises - even when dining in - are served in paper compostable boxes. You help yourself to napkins and utensils and hot sauce from a table on the side.

It’s a good khao man gai. I’ve had this dish at a number of places but haven’t been to Thailand yet to try it at the source. Tender flavorful skin-on chicken (helped by the dark meat only) with a decent amount of fattiness. The rice was also good and had noticeable chicken flavor and a yellowish tint, but it sometimes was a little too clumped together and slightly overcooked. The sauce, which had a little bit of heat, tasted like a sweet rich salty soy sauce with garlic and ginger and had whole soybeans in it. Those craving more heat can also add sriracha and a house made habanero sauce as well. I usually just dump the sauce over the chicken before digging in. It’s garnished with a few sprigs of cilantro and some cucumber slices. The cup of soup on the side is a plain chicken broth, ideal for slurping between bites of chicken and rice. I didn’t detect any notes of winter melon in the soup, unlike the soup from say Nong’s in Portland. 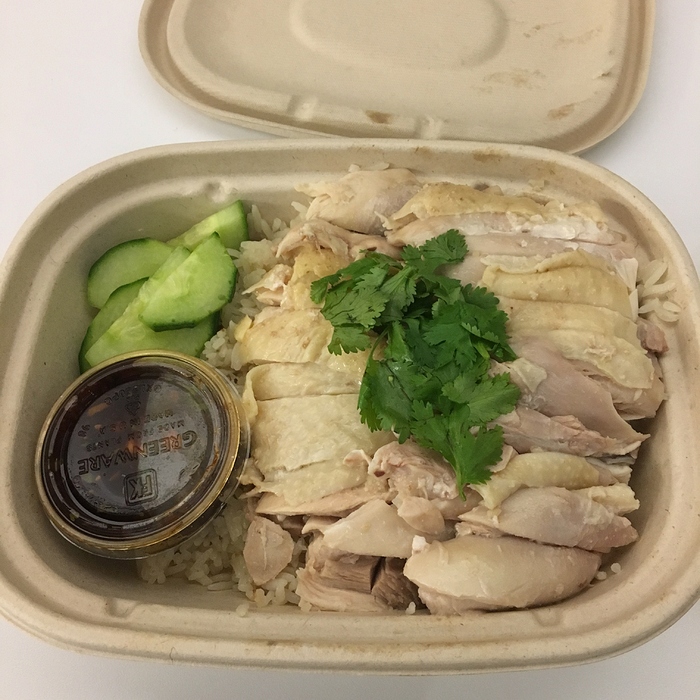 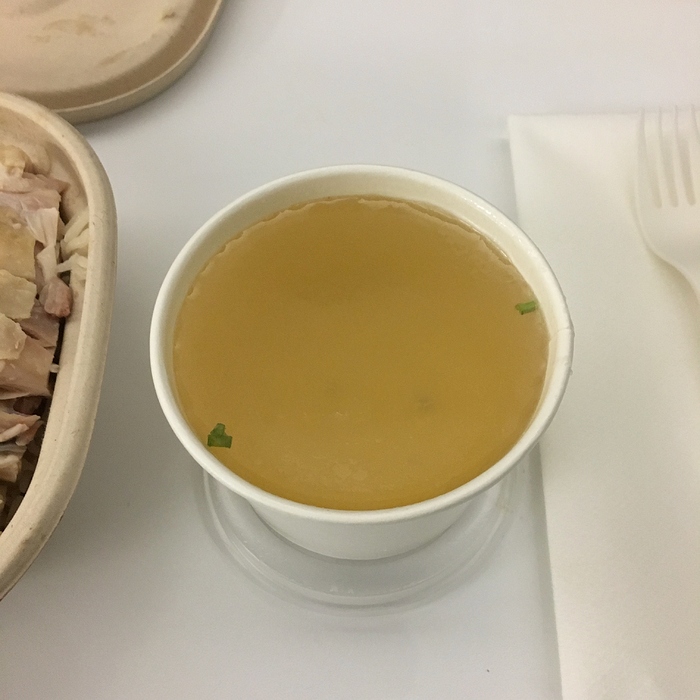 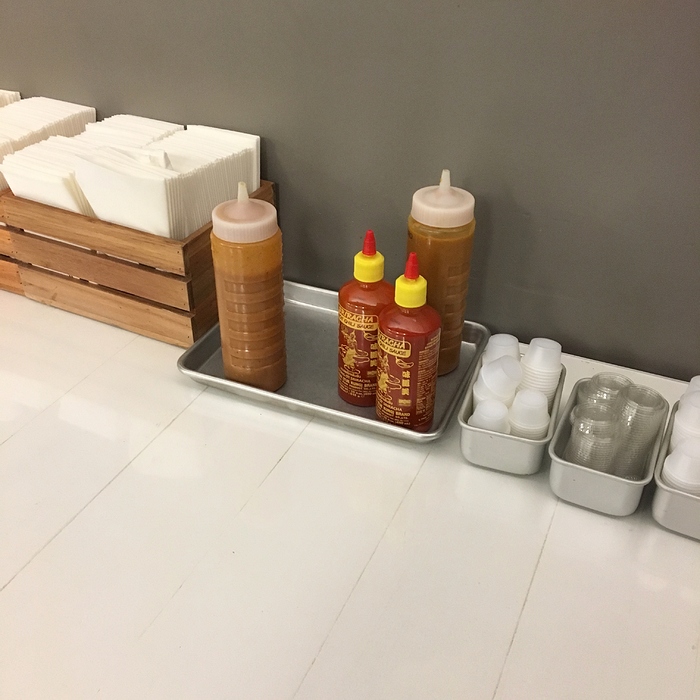 For a while I was going to “What the Cluck” (on Haight near Shrader) which may or may not be owned by some of the same people. It certainly sells the same food, prepared the same way with the same sauces.
I enjoyed the “soup” option where they added more broth and dumped the rice and chicken in the soup with some added fresh baby spinach.
Recently there was a new smell from the kitchen, I assumed frying garlic for the sauce, which had a odd pungent odor. Ever since then my stomach can’t handle this food anymore. I had it about 10 times with no ill effects so I am not sure what changed.
Either way, others surely won’t have my same issue, and this is one of the only edible places on Haight Street, and a better bargain than most.

3 posts were split to a new topic: [SF] What to eat on Haight?

I just went here for the first time this week for lunch. I’d been to Nong’s in Portland a few years ago, and while i know her version is revered, i found it a little austere for me; read: a tad bland? maybe just too delicate for me.

I loved Rooster & Rice’s version. I also had the classic, but didn’t know you could specify dark/light meat, so i got both, as it comes. I found the broth and the rice so much more flavorful than Nong’s, the broth especially, and I was wondering if R&R is catering to a more American palate? I poured some of my broth onto my rice. Loved the gingery sauce too, especially with the cuke slices on the plate, and I tried the habanero on my rice and chicken; funnily enough, it tasted like habanero but without a ton of heat, which surprised me. All very good, and I’d eat there again. in fact, it’s a good meal to have if I’m only going to be eating lunch and no dinner, as I have a class one night a week right after work, so it may become my new Wednesday regular.

I went there this past Wednesday, also ordering the Original, and I pretty much concur with Maria’s review. The chicken seemed a little overcooked to me, but the rice was very tasty. It’s a huge amount of food for one person, well worth the $12. I had a can of coconut water (sorry, I didn’t take note of the brand) which was probably the freshest tasting canned coconut water that I’ve ever had.

I’ve been having lunch at the Soma location on 2nd between Harrison and Folsom more or less weekly since they opened a year or so ago. While I agree that it’s generally pretty good, they’re slammed during the usual lunching hours and very inconsistent. Meat will occasionally be dry and overcooked, the amount of skin you get varies wildly, broth color can be anywhere from dark yellow to nearly clear, and you’ll occasionally get bits of bone. It’s still a step above most of the usual lunch options in that area, though. The $2 egg addition is pretty good. Additional veggies have always been steamed broccoli when I’ve ordered them, not sure if it ever changes.

They also occasionally have little bags of fried chicken skin available - the one time I tried it I wasn’t impressed, although it may have been sitting around for a while.