Had a dinner at the bar at Perbacco and stuck to some old favorites. 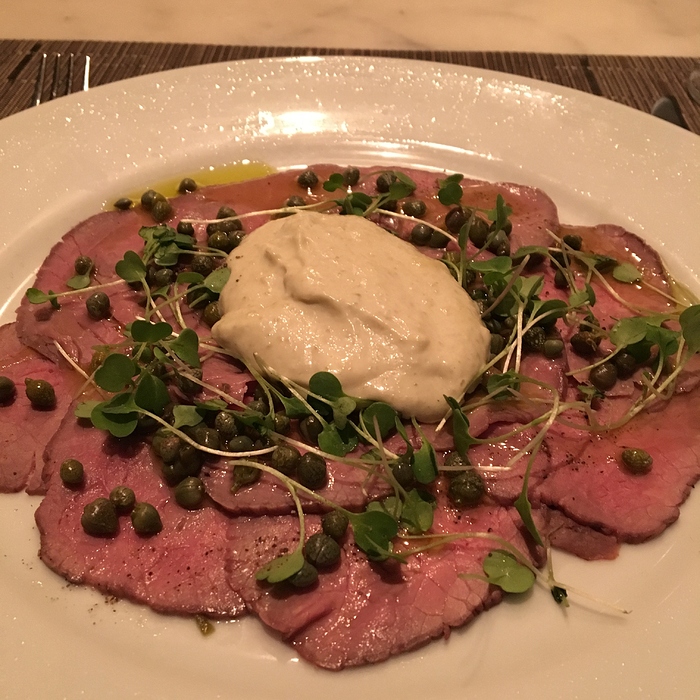 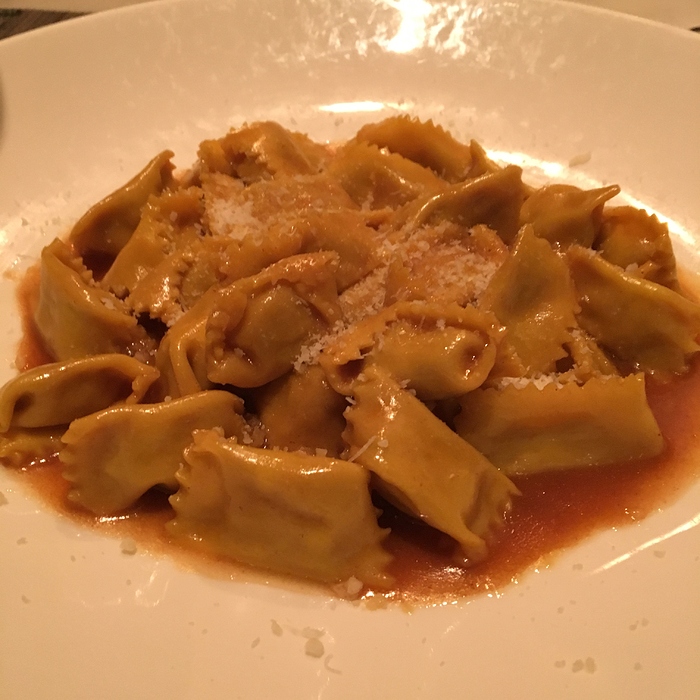 Fine, but wasn’t as good as usual, I think it was because some of the brussels sprouts were not sliced in half and didn’t get enough of the caper shallot sauce on them. Also this dish didn’t have as many crispy bits as previous times that I’ve had it. 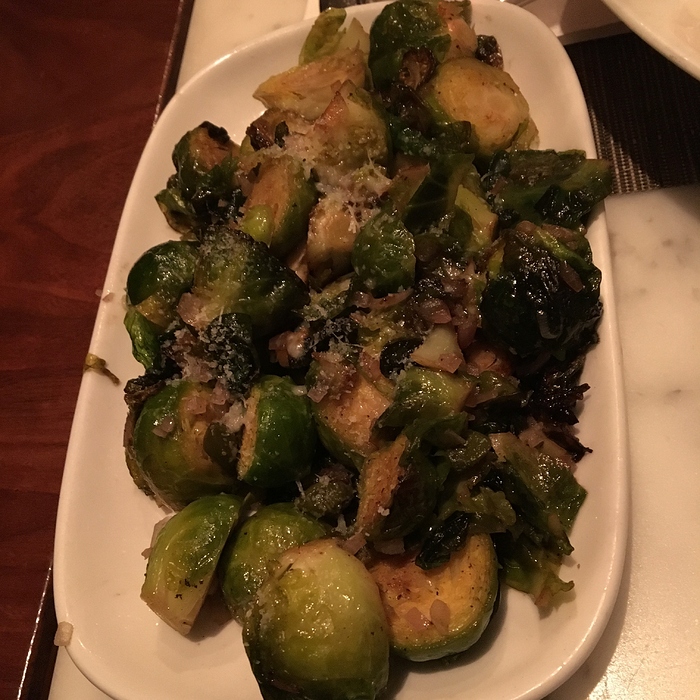 From another recent meal at the bar:

Off the appetizers section. The octopus was cooked perfectly - tender but still a little springy. Potatoes were fine, lacked salt but was good after putting some of the creamy aioli sauce on the outside on it. Don’t actually remember the veal tongue in this dish. Pretty rich - everything was sitting in a pool of butter. 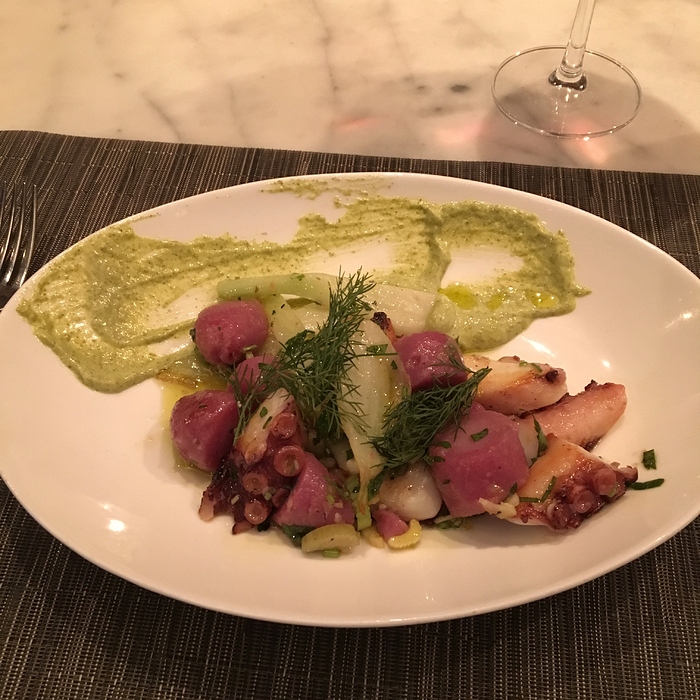 Duck sausage in agnolotti wrappers. The sausage inside was a little firm, had the consistency of potsticker filling. So this was like little mini truffle and duck flavored dumplings in a buttery rich gravy sauce, with a bit of sweet tangy aged balsamic vinegar drizzled on top to cut through the fat. Really delicious. 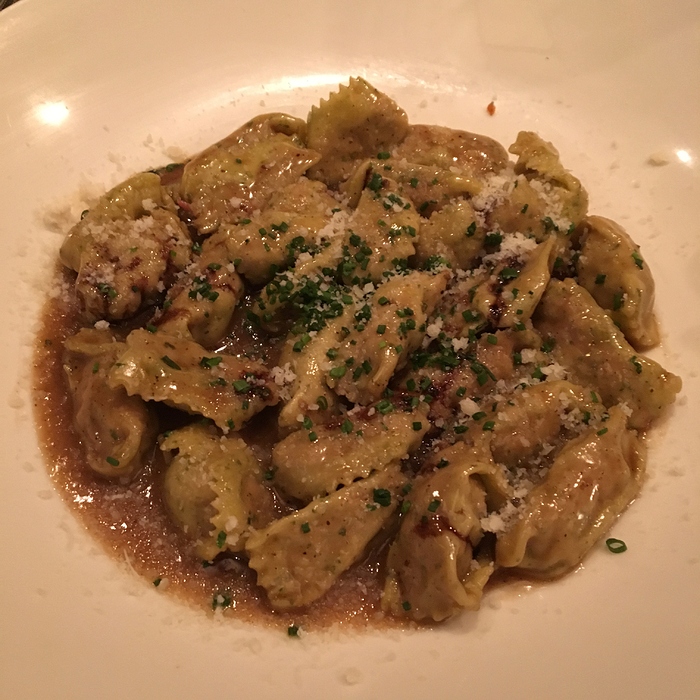 Was the server hungry? It looks like they might have licked the plate before giving it to you! Or an artistic plating experiment gone wrong. Hopefully it’s simply you started eating it.

Wow I just noticed that. I’m pretty sure that’s just a plating error (I hope 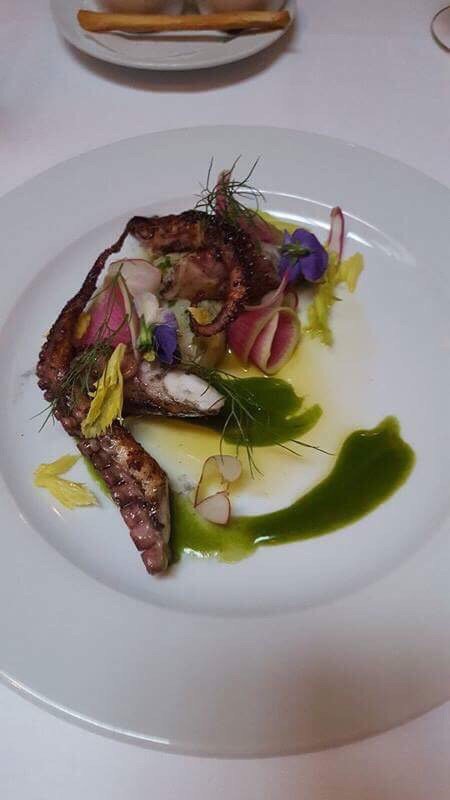 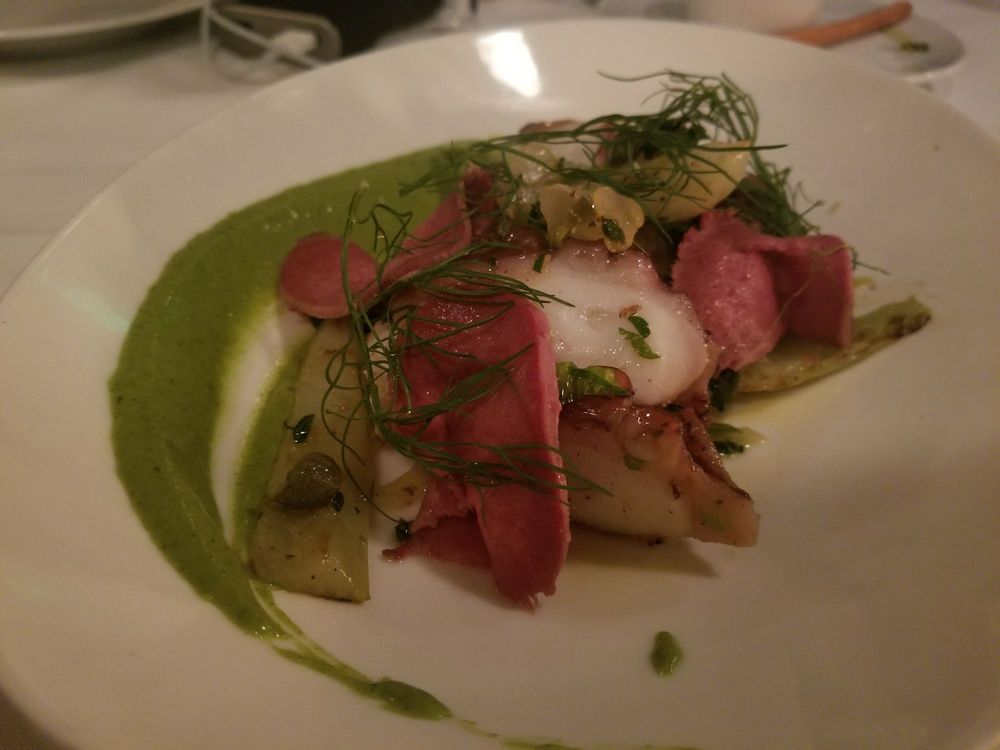 Perbacco was advertising on Tablehopper (and other places, of course) about two months ago for help - can’t remember if it was a sous chef or chef de cuisine but it wasn’t just a line cook position.

Reservation tonight. I think this is tonight’s menu.

@shrinkrap I’ve been a few times this year but haven’t written them up. They have a parklet now and also some tables outside the front of the restaurant. The agnolotti were as good as before, also tried the langaroli which are similar wrapped pastas, but filled with short rib and in a truffle sauce. Those were really good too. Didn’t try any of the mains except for once they had the meatballs from Barbacco next door on the menu. Usually just stick to the appetizers and the pastas. The vitello tonnato and fritto misto were quite good off the appetizers list.

I love Perbacco but haven’t been in a long time. That Tajarin with pork and porcini sugo would be calling my name though. Jealous! 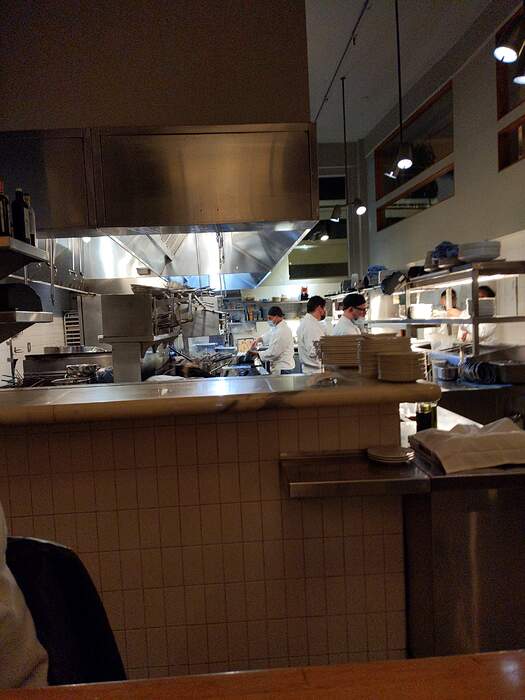 I had paparadelle with beef short rib. It was okay. I don’t know why I order pasta.

Son says his pasta stuffed with short rib might have been his best pasta ever.
LANGAROLI? Angolotti? 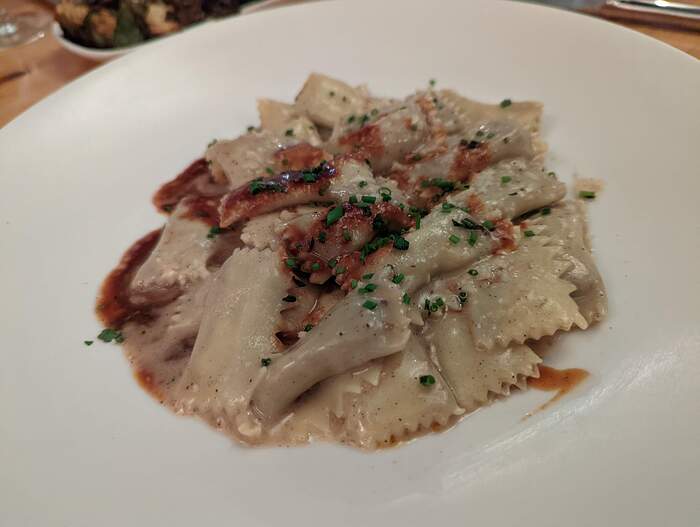 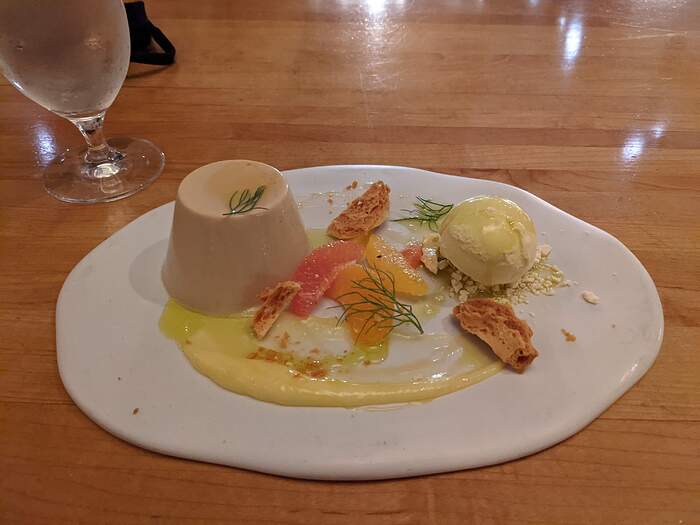 Panna Cotta! A little heavier than expected, but there was some lemon curd that was the star of the plate! 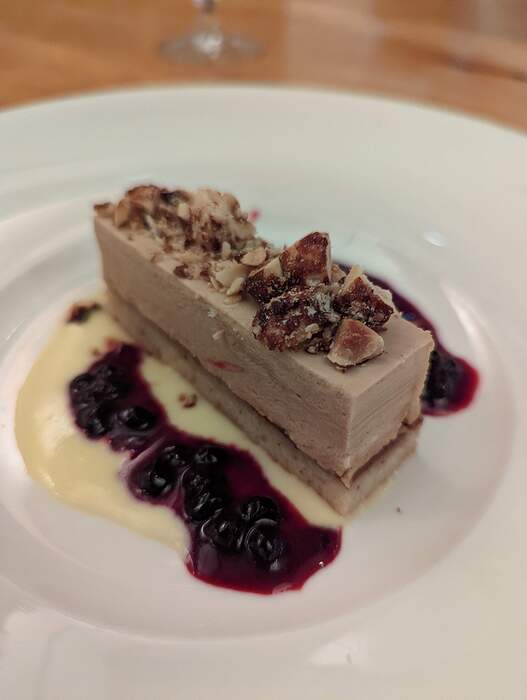 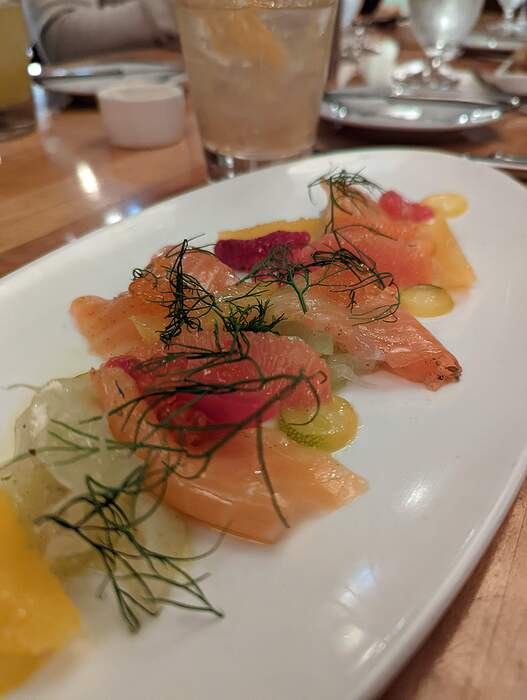 Son says his pasta stuffed with short rib might have been his best pasta ever.
LANGAROLI? Angolotti? 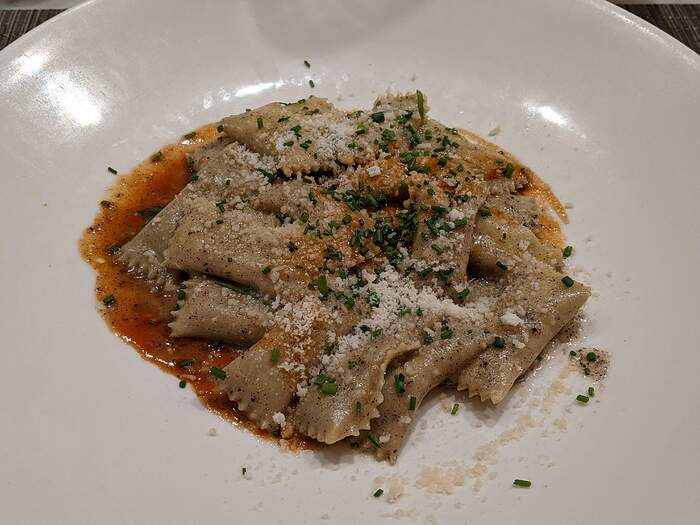 Too bad about the pappardelle, hope the rest of dinner was better.

@brisket44 I like the tajarin too, though I haven’t had it in awhile either. The noodles resemble ramen to me.

Last night we did Warfare Tavern, and this morning Ferry plaza.

Too bad about the pappardelle, hope the rest of dinner was better

The paparadelle was fine, I just fill up quickly on that, and feel like I’m struggling through. I did love the texture of the short rib, and to add to it I chose the larger portion.

Everyone enjoyed their dishes quite a bit; I started with grilled octopus which had just enough bite, and a perfect balance of accompanying fruit, veg, and sauce.

Husband had a sliced pork loin, daughter short rolled pasta and pesto, and DIL who had the frito misto, as well as the good sense to order the smaller portion of paparadelle with short rib.

All in all, a late December tradition we were fortunate enough to have enjoyed once again.

I recently went back to Perbacco for a dinner of pasta dishes. Tried all new to me dishes this time.

RAVIOLO ALL’UOVO ($21)
truffled ricotta filled raviolo - wild mushrooms - farm egg
This was off of the antipasti section. I’m a sucker for big ass ravioli filled with egg and ricotta. This was an excellent rendition. Lots of mushroom and truffle flavor in the buttery sauce with I think morels. 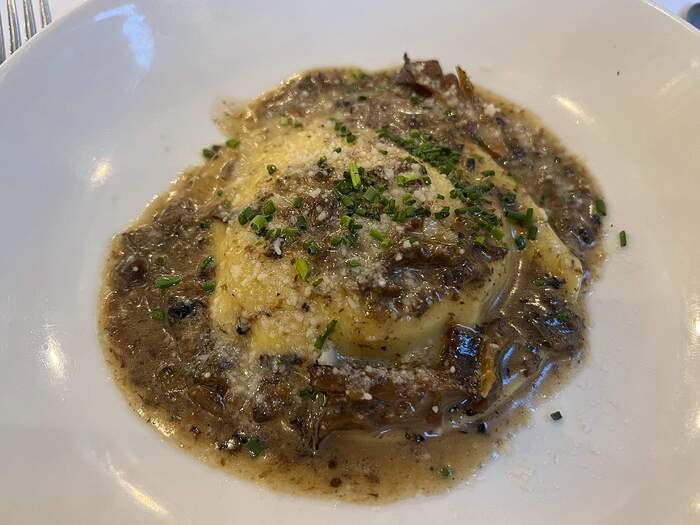 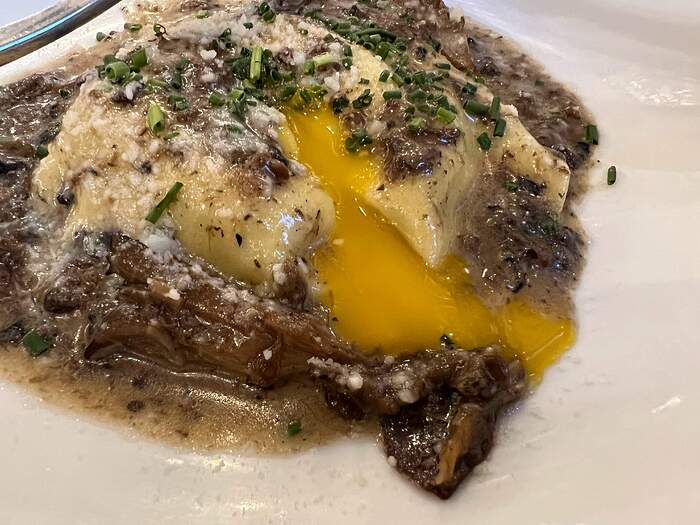 ROTELLI AL PESTO DI PORRO SELVATICO ($22 for a small portion)
semolina pasta - potato - porcini mushroom - ramp pesto - basil - pecorino cheese - pinenuts
Rotelli are the wheel shaped pasta. I think these were fresh. Nice pleasantly chewy texture. The ramp pesto sauce was less strongly flavored than most basil pestos that I’ve had and also a bit thicker and starchier. And there was some thinly sliced potato that was still a little crunchy. Very good. 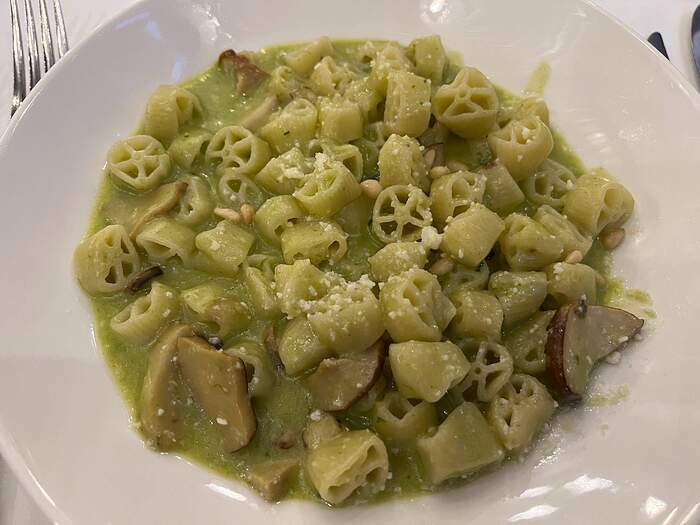 TORTELLI CON FEGATO D’ANATRA ($27 for a full portion)
pasta filled with truffled duck liver mousse - blueberries - hazlenuts - sherry vinegar
This unusual dish consisted of pasta wrappers filled with a rich, creamy, and livery duck liver mousse. In a fruity sauce with cooked whole blueberries that had a bit of sweetness. It was good for the first few bites, but the richness of the filling, which also had a uniformly creamy texture, was a little too much after awhile. And repetitive? Felt like it was missing something. 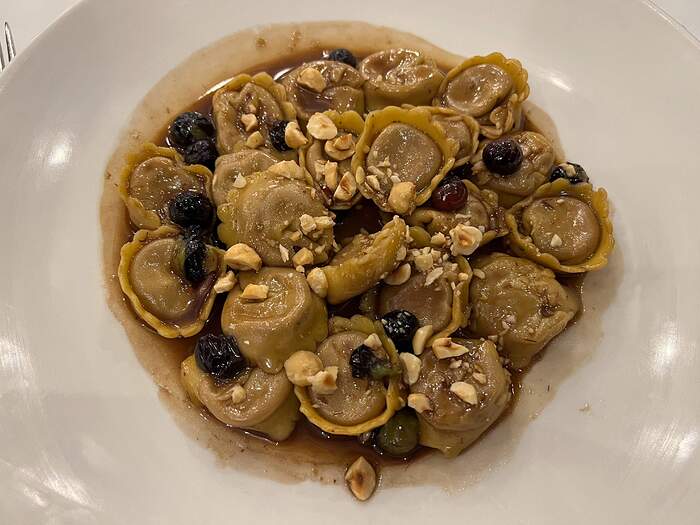 I didn’t have room for dessert after the pastas. Maybe two pastas would have been enough

A good dinner though I probably wouldn’t order the tortelli again. 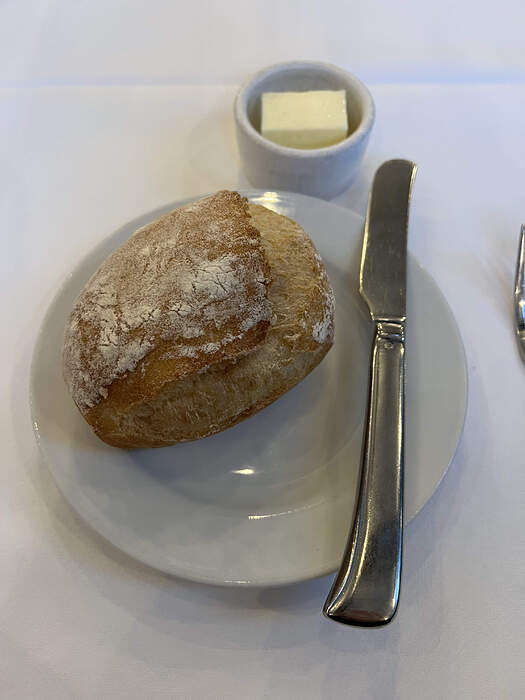 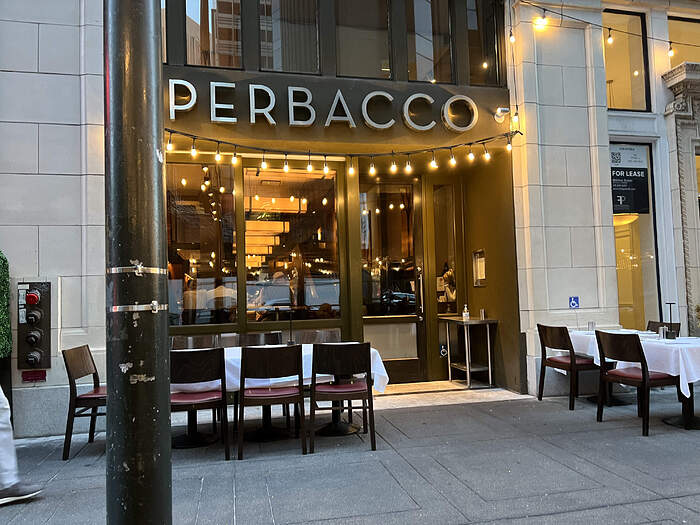 I had a dinner of mostly old favorites a few weeks ago:

Vitello Tonnato ($17)
The cold pink veal, which had the texture of a tender roast beef, went so well with the creamy tuna mayo sauce and the salty capers. 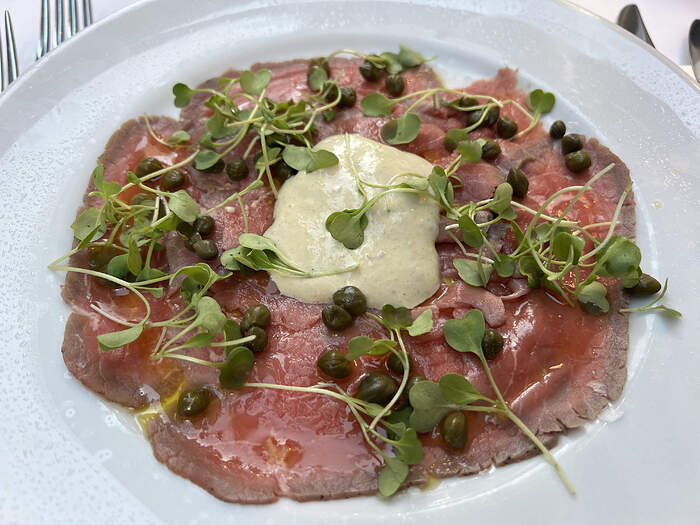 Agnolotti dal Plin ($21 for a small order)
As good as usual. Little meat and vegetable packets in a buttery gravy like sauce. 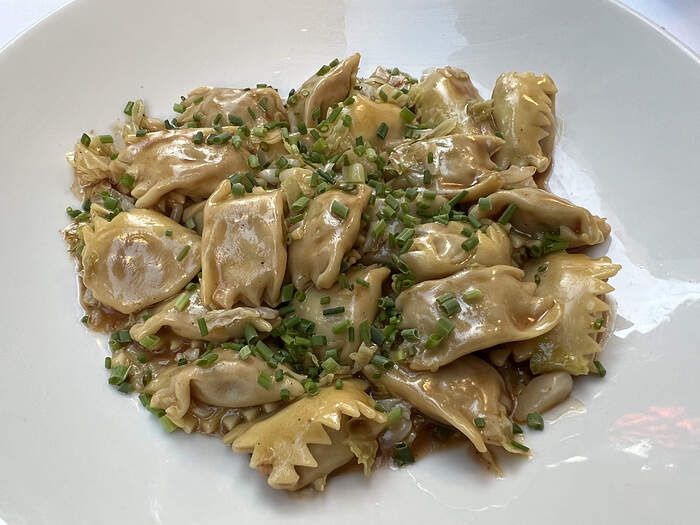 Pappardelle ($21 for a small order)
This was new to me. Toothsome pappardelle made fresh I believe, in a thinnish gravy like meat sauce with short rib. It was topped with a dollop of horseradish cream sauce, which was a nice sharp accent for the beefy gravy. 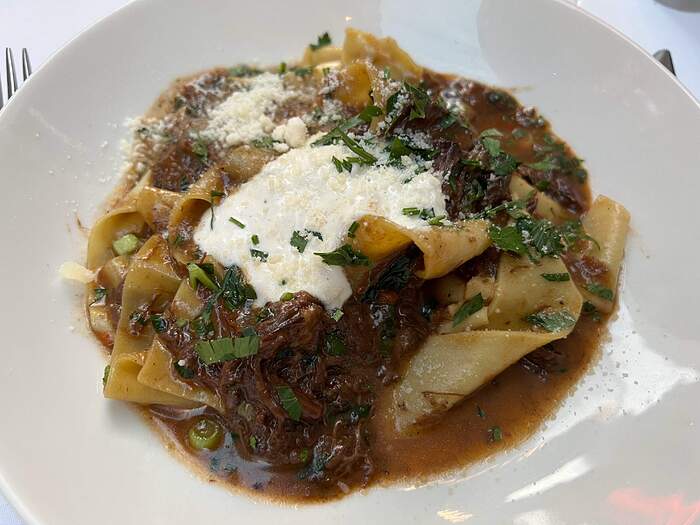 Erborinato Sancarlone ($8)
Blue cheese for dessert, which apparently has a rind washed with coffee and honey. 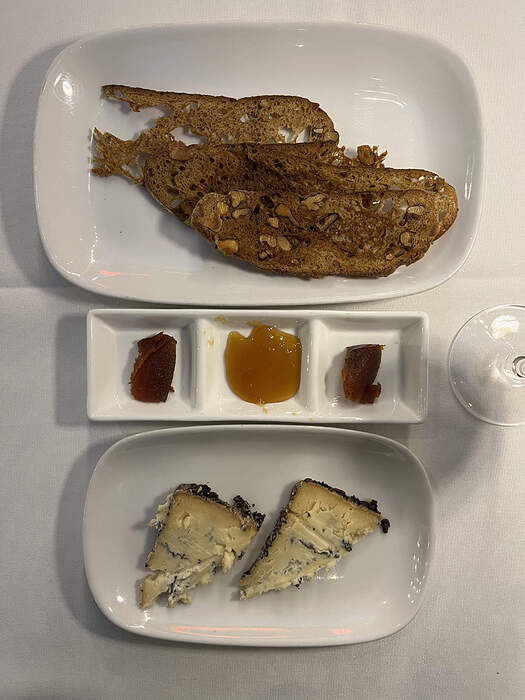 Vitello Tonnato ($17)
The cold pink veal, which had the texture of a tender roast beef, went so well with the creamy tuna mayo sauce and the salty capers.

Will we see your take on this soon?!!!

Looks great, I haven’t been to Perbacco in quite a few years so need to get back. Have you been to Belotti in Oakland? Their agnolotti is the best I have had anywhere, whenever I order it somewhere else all I can think about is their version.

I haven’t tried making it yet, I think the hard part would be cooking the veal right.

I haven’t tried making it yet, I think the hard part would be cooking the veal right.

I’ve followed your work. Methinks we have overlapping tastes.