I’ll be in San Antonio in a couple of weeks, staying near the convention center. Any good food nearby? I don’t have high expectations (Riverwalk, etc), but I’m hoping for some good seafood, BBQ, or German food without going too far afield. Boudro’s is already a regular stop, but I’d like some variety on this trip. Any suggestions? Open to other cuisines as well. TIA.

Also on the river walk, Paesano’s is a must stop for me specifically for the Shrimp Paesano. Do get over to the Pearl Brewery complex! Many great eateries, the one I’ve been to, Cured is outstanding.

If you are free for breakfast and the weather is fine, dine al fresco at Pioneer Flour’s Guenther House restaurant.

I can’t speak at all from personal experience (I haven’t been to SA in more than a decade) so I’ll leave it to you to sort out and find one that suits your need for proximity to the convention center.

Here’s to good eatin.’ Be sure to come back and tell us what you found.

I forgot about this thread, and posted most of this months ago in the other board (many more months after I was there), but since you ask:

I came across this thread again, after I had already decided I was too embarrassed to post about my January Texas BBQ run – you’ll soon see why: I checked into my San Antonio hotel early afternoon, immediately picked up my rental car, and headed for La Barbecue in Austin, as I’d heard so many raves about it. Except I couldn’t even get through to La Barbecue on the phone to find out how long the wait would be. Made a spur-of-the-moment decision to try Stiles Switch instead (also highly regarded by Texas Monthly). I’d checked Google Maps a few days earlier, (late in the evening) and it indicated that it would be a 75 min. drive to Austin. OK, I can live with that. Getting on the freeway, I noticed that Waze predicted over an hour and a half, and I was immediately slowed down by a traffic jam. Stubborn me, I continued on. It took about 2 1/2 hours to get there. I’d forgotten that it was Friday afternoon. Brilliant, huh?

Stiles Switch was great old-school BBQ (both the brisket and the hotlink), and would have been worth the trip, had it been the expected two-and-a-half-hour round trip. Ironically, Hwy 35 was so crowded on the way back to SA., Waze instead routed me close to BBQ Central, i.e. Lockhart and Luling. Of course I had just eaten (not that I should have let that stop me) – but I’d already been to Black’s on a previous visit, and I figured even if Kreuz was open, my chances of getting brisket in the evening were slim anyway. Also, I’d had enough driving for the day as it was.

Later that evening I walked over to my favorite near-the-hotel place, Boudro’s, where I had a reliably good piece of grilled fish with a nice sauce and vegetables. I repeated this over the next few days, as the conference hours were long and it was convenient. I’d returned my rental car anyway, and besides, one BBQ quest was enough for this trip. Being from Vegas, I don’t get fresh fish often, so it worked out nicely.

On my last day in SA (conference was over), my flight didn’t leave until early evening, so I caught an Uber over to the Pearl Brewery for an early lunch at The Granary, where I ordered a quarter-pound each of fatty and lean brisket. The difference was amazing – the lean brisket wasn’t tender and not very flavorful – not even worth finishing. The fatty brisket, however, was absolutely excellent in all ways – it was as if the fatty and lean were from two different places! I should point out that I’ve found the lean brisket best at some BBQ places (Maple Block in L.A., for example), so you can never tell… Mediocre sides of German potato salad and burnt end baked beans. Wandered around for a few hours, and had an excellent early dinner of redfish with Gulf crab mac & cheese at Southerleigh before picking up my bags and heading out to the airport.

Just as a footnote, my original plan was to get up very early the Saturday morning after arrival, drive up to Lexington to get in line for Tootsie Tomanetz’s famed brisket, and then drive back to start work at 1 PM or so. That would’ve been fine, except my clients added a 10 AM meeting to the schedule. I’ll just have to catch Snow’s on another trip.

Photos: 1. Brisket and hotlink at Stiles Switch; 2. Fat and lean brisket at The Granary; 3. Redfish with Gulf crab mac & cheese at Southerleigh (sorry, I started on #3 before taking the photo – it’s a bad habit, I know) 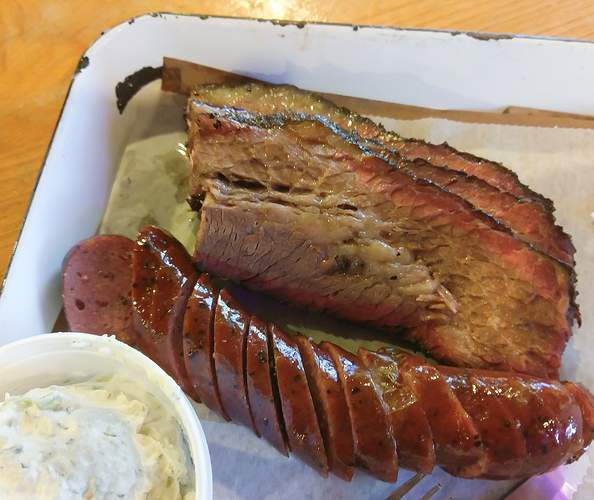 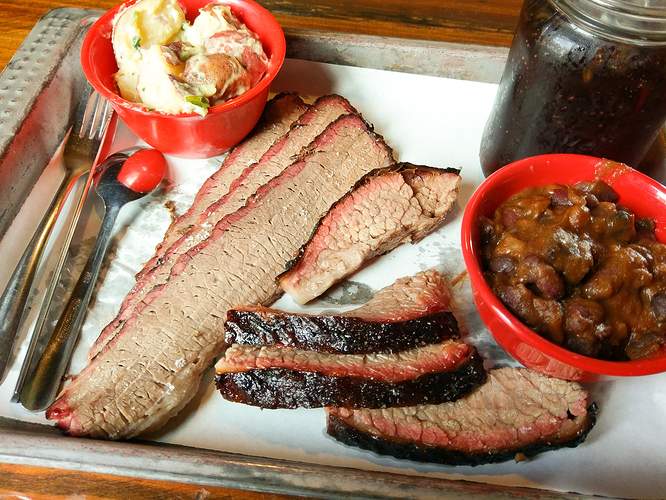 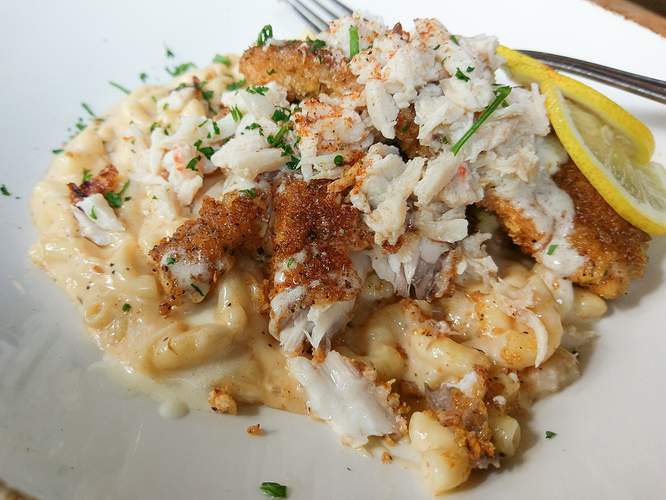 It doesn’t matter what day of the week it is, I-35 is brutal especially through Downtown Austin, they can keep their weird four lane interstate. I don’t see myself going back to that hick village.

I love Boudro’s, last time I went I got a blackened yellowfin tuna with haricot verts and ruby red grapefruit among other things in the lunch salad, a steal at 13 dollars.

A place I like to grab a beer and some fish and chips is Waxy O’Connor’s on a quiet place on the River. It’s an authentic pub built in Ireland and shipped across the pond.