Just saw that Sally’s Apizza is opening it’s first branch in Stamford this summer. Hopefully, this one will be better than the Yonkers Frank Pepe’s. I’ve been to the Fairfield Pepe’s and it was as good as New Haven, but Yonkers has never come close. So it can be replicated , but will it. be……. stay tuned

but Yonkers has never come close.

I so agree. I was not crazy about the pizza at the Yonkers branch and I found the place to feel dirty. My husband says the one in Danbury is better. I’ll have to try Sally’s when it opens.

well, made it there for the grand opening and was about the tenth person in. Was led to a table and it was explained that I’d have to go to the counter to place my order. I suppose a smart-phone/app might have been available, but I still use a “relatively” dumb phone - can just make and receive phone calls. That was fine, but I decided to order more (at the same time) for take-out. Turns out the take-out had to be ordered elsewhere, and by the time I got there and worked my way thru the line that had formed. It took quite awhile, and my original pie was just sitting at the table when I got back there. I would guess it had been there for several minutes at the very least. Was good, not great and certainly would have been better if it had just come out and been delivered. The ordering system , of using separate for take-out, I was told is in effect in New Haven and works well. I think it was ridiculous bureaucratic boondoggle. The pies still have their notorious thinner slices BUT, they were pretty uniform, so it is more style than substance, and never did affect me one way or the other, but if sharing ,at least more likely to get equal portions now. If I’d had to drive as far as New Haven, I’d have been upset, from New Rochelle to there - meh, may just go down to pizzeria La Rosa in New Rochelle or even Grigg street in Greenwich. Neither is the mind-blowing experience of Pepe’s or Sally’s years ago, but at least as good as the local versions of either.

It seems that when these great CT pizza places open down here - think Pepe’s, it’s just not as good.

This is valuable intel as we have family in the Stamford/Greenwich axis. Thanks for posting @richb51.

As for my very limited experience with how the New Haven pizza joints are translating (with the caveat that we’ve only eaten at New Haven joints twice, once at Frank Pepe’s and once at Modern): we’ve had decent replications of Pepe’s clam pizza at the Manchester CT location a couple of times. The shop local to us (Burlington MA) leaves us cold. If I remember correctly, they also had a similar separate ordering counter/system for take-out, causing a scrum of confusion in the early days. We ate in at our first visit and it was certainly good pizza, but not great. We got takeout a few more times and it was just ok. We have not been back since pre-pandemic days so no idea how it’s doing now.

Mind you, it was still very good pizza, just not road trip worthy. If already in the area , it’s as good as you’re likely to find. Grigg street in Greenwich (greenwich pricing) makes a very good pie and they make some subs on bread from kneaded bread . I’m partial to their Italian combo, however, the meats are (to me) somewhat bland but high quality . Both the bread and very good greens and vinaigrette differentiate it from a typical Italian sub. May as well mention one more in Norwalk which is Letizia’s, they (haven’t been there in some time0used to make what they call a “garbage pie”. it’s basically an everything pie much like modern’s Italian bomb. Both Modern and Letizia made a very good everything pie. Not so easy to get everything to work and cook properly, but those 2 did if you want lots of toppings.

The really ironic part of these new branches is that these old-school pizza places used to stress that it was the pizzaiolo that made all the difference. That was when they had one guy who’d been making them for forty years. Now they claim to replicate the recipe and oven to the nth. degree so that the pies will be just as good as from years ago. I think I’m finally convinced that the old-timers who made them are a big part of the difference. Assembly line duplication does not seem to make an identical pie. At least they are still churning out some very good pies.

Went back to Sally’s the other day and with some trepidation ordered a pie with pepperoni but this time decided to try with extra cheese . I usually don’t care for extra cheese as it is often gloppy and breaks up the balance. But in this case, it made for an excellent (if expensive) pie. In the spring I’m looking forward to trying to make my own with a newly purchased ooni outdoor oven. The biggest problem (besides learning how to use the damn thing) is I have mobility issues. While much improved, I need to hold onto something for balance, which means I can’t really carry anything, except if I’m sitting - there must be a way . Anyway HAPPY HOLIDAYS

I’ve been a member over at the pizzmaking.com forum for a number of years, it’s a welcoming, knowledgeable community with incredible depth and breadth around home pizzamaking. You’ll find quite a lot of information/supprt about how to use your ooni. 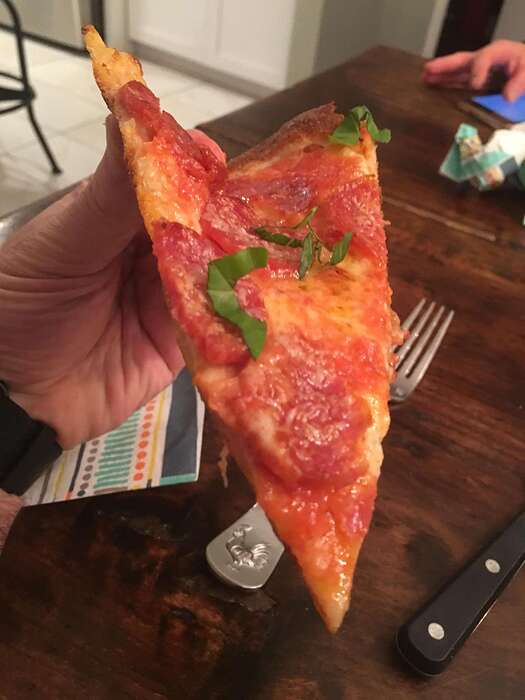 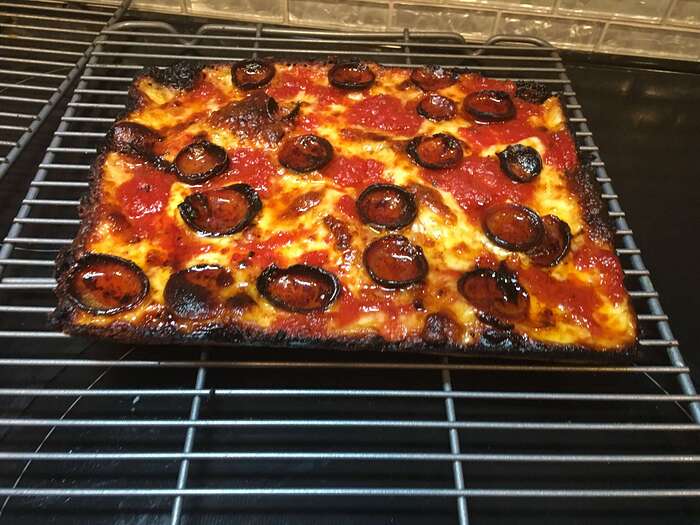 thnx, I didn’t know about it. But my biggest problem is getting anything to the grill to cook. it’s why I gave up my gas grill a few years back - lack of accessibility . But I’m more determined with pizza, so time will tell. Incidentally, those both look terrific. From what I gather, it’s only sold wholesale, but if you can get your hands on pepperoni from the ezzo sausage company, I gather it’s a big step-up

thanks, ezzo is excellent but hard to find, pennmac sells it mail order, a bunch of us split an order to make it more affordable.