Chef Ray Garcia needs little introduction to So Cal natives who enjoy dining out. The former Chef behind FIG, and Broken Spanish and B.S. Taqueria, really blossomed with Broken Spanish, where he was able to explore his cultural heritage and craft elevated dishes from Mexican cuisine. With the COVID-19 pandemic, he was forced to permanently close Broken Spanish and left L.A. for awhile. He’s now returned with a brand-new restaurant, Asterid, right next door to the Walt Disney Concert Hall. 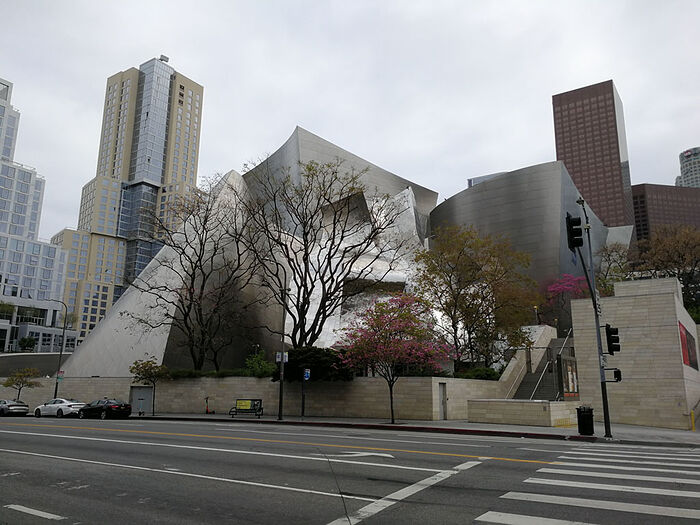 Walking into the new restaurant and you’d be hard-pressed to remember that this was formerly occupied by fine dining bastion, Patina. The remodel and brighter, open kitchen that greets you on the right hand side when you walk in, and a more inviting bar creates a pleasant, livelier atmosphere.

Asterid is named for a classification of flowering plants such as tomatoes, eggplants, sunflowers, petunias, honeysuckle, etc. (per Wikipedia). When we asked the manager why this was chosen, she mentioned it was a curious name to pique the interest of diners, and a conversation starter. Interesting.

Chef Ray Garcia was indeed in the house when we arrived. He was overseeing every dish coming out of the kitchen, so this was encouraging.

Looking at the menu, it was a surprise. There wasn’t a single dish from his successful (and delicious) Broken Spanish restaurant. Perhaps he wanted to make a clean break? One thing we noticed were that most of the diners seemed to be clientele of the next door Disney Concert Hall (which is also home to the L.A. Philharmonic Orchestra) and its showing happening soon (we overheard numerous guests mention that “it’s almost time…” etc.). And as we walked out, there were lines forming to get into the Disney Concert Hall for whatever show they were having. 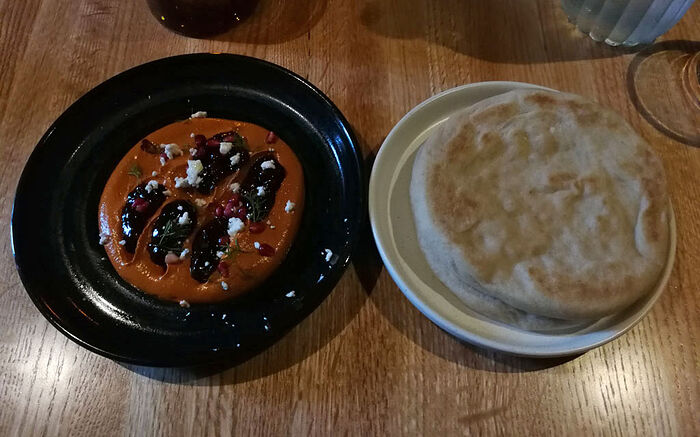 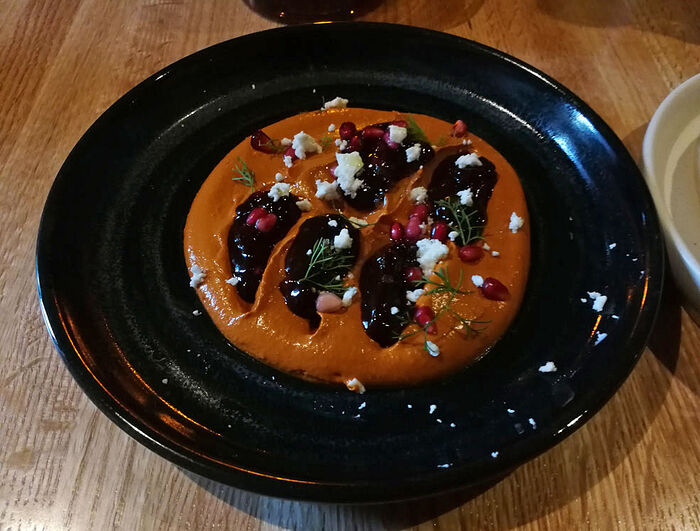 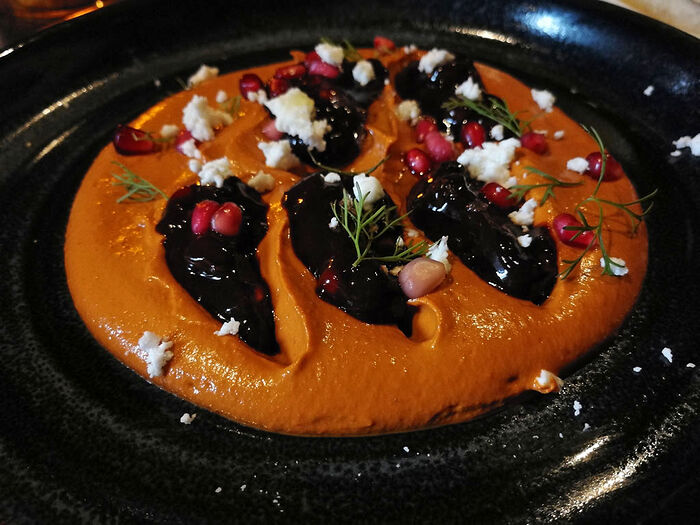 Muhammara is usually a Syrian / Arab dish, and this is the first time we’ve seen Chef Garcia tackle this cuisine. This turned out to be a bit unbalanced, too sweet and too tart at the same time. It looked visually popping, but it tasted like a smooth tart and sweet dip, mainly the Pomegranate and Lemon Juice mixed into the Cashew Puree. 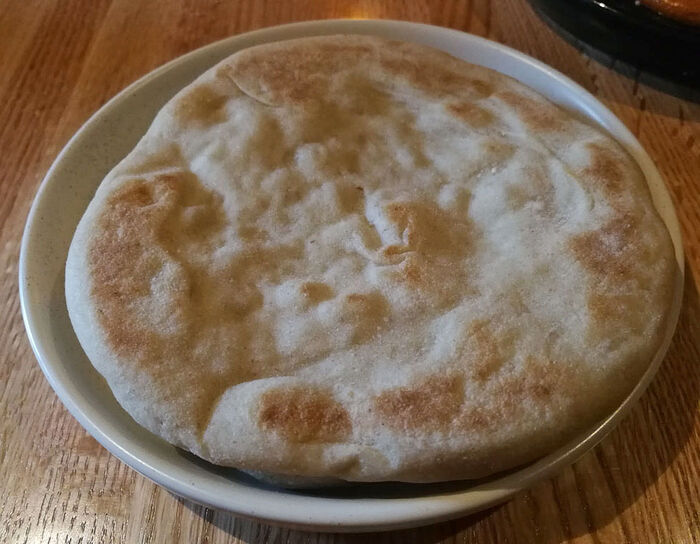 The Housemade Flatbread (like a thicker Pita) arrived hot and freshly made, which was great, however in comparison to Chef Ori Menashe’s stunning Handmade Pitas as Bavel, these felt too stodgy and thick in comparison. 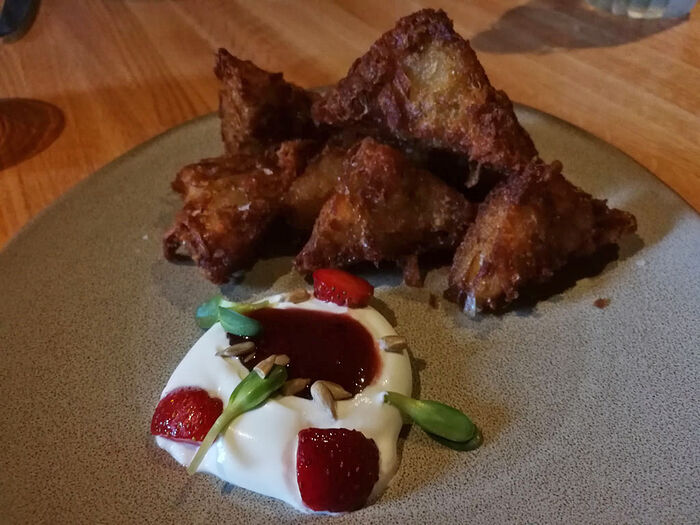 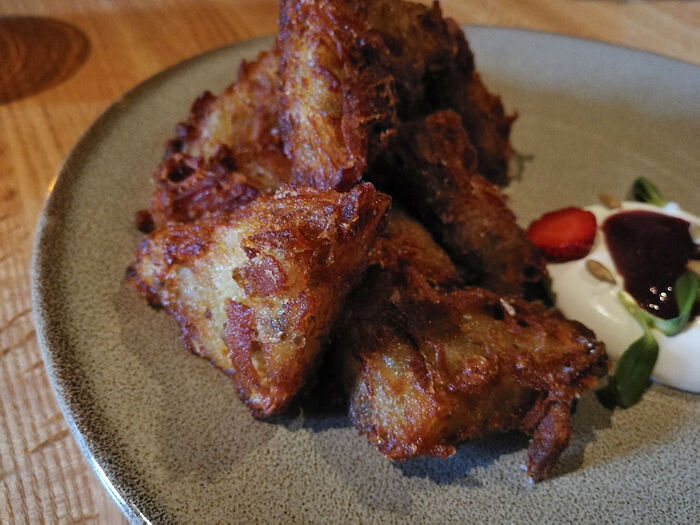 This sounded fancy and nice, but in the end, it tasted like fancy Fried Potato Wedges. They were freshly fried, but the outer breading created a thick, crunchy batter, and it totally overpowered the Sunchoke flavor.

To make matters worse, the Strawberry Pepper Jam was way too potent: I love Strawberries in general, but this was so concentrated with Strawberry Jam sweetness and flavors, that when you had a small dip of it with the Creme Fraiche and the Sunchokes? All you tasted was Strawberry.

It’s safe, playing to sweet, familiar fruit flavors, and the Sunchokes are completely rendered down to an inoffensive “Fried Potato” status, but just with a fancier name. 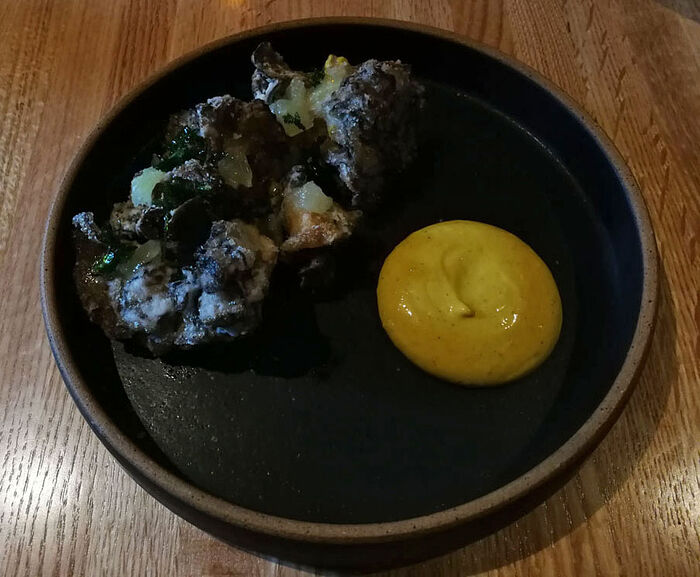 Yet another case where it felt overly simplified and basic, and also unbalanced: The Fried Maitake Mushrooms were too thickly battered, but there was enough Mushroom within for its essence to shine through. That was great.

However, the Turmeric Aioli that was provided alongside it was crazy concentrated: A blast of Turmeric spice flavor, super salty and tart, it completely overpowered the Maitake Mushrooms. 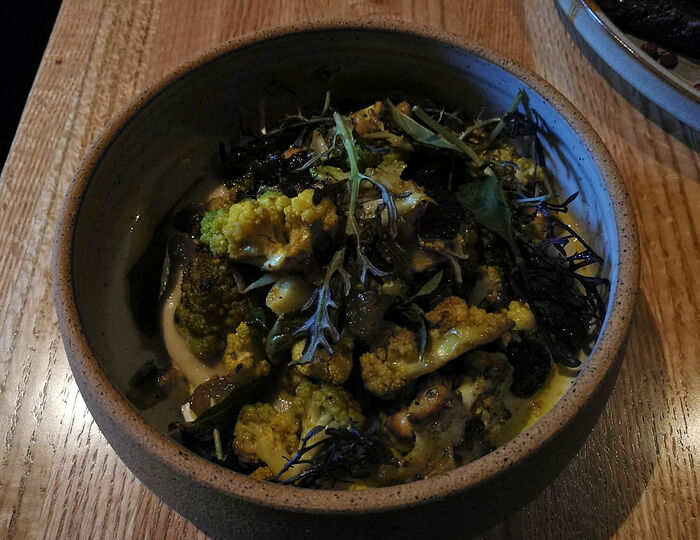 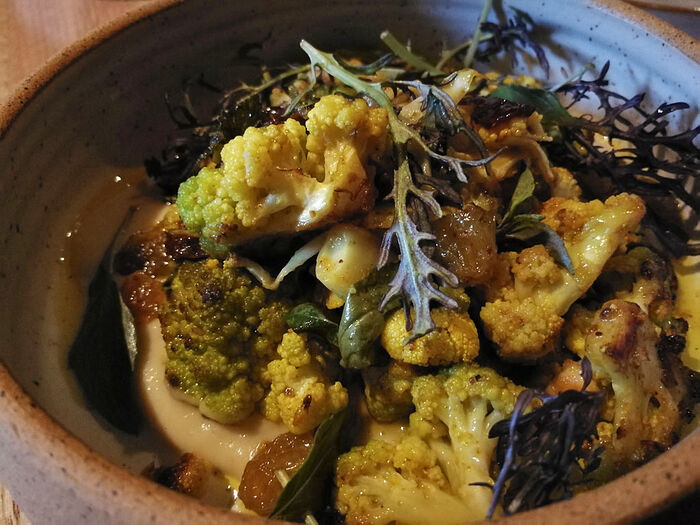 This was tasty. Highlight of the evening!

The mix of Cauliflower and Romanesco tossed in a Vadouvan sauce worked. It’s like the familiar “Curried Cauliflower” offerings you see in many places around town (Indian or not). But it was pretty dialed back. Just a safe, light Curry-esque flavor, balanced (great!), but that was about it. 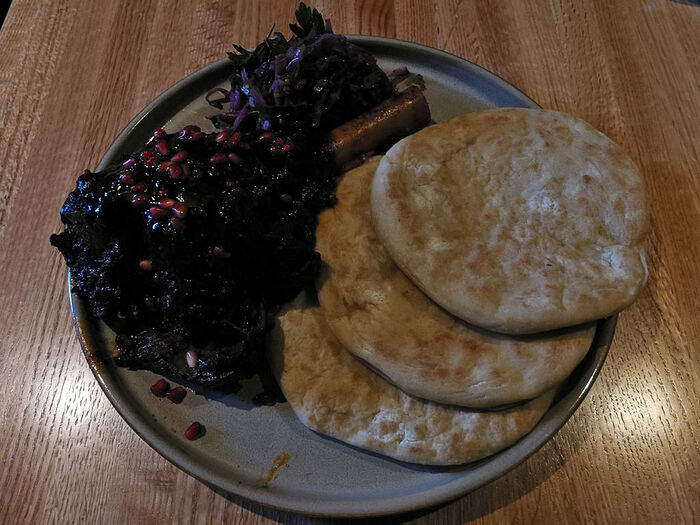 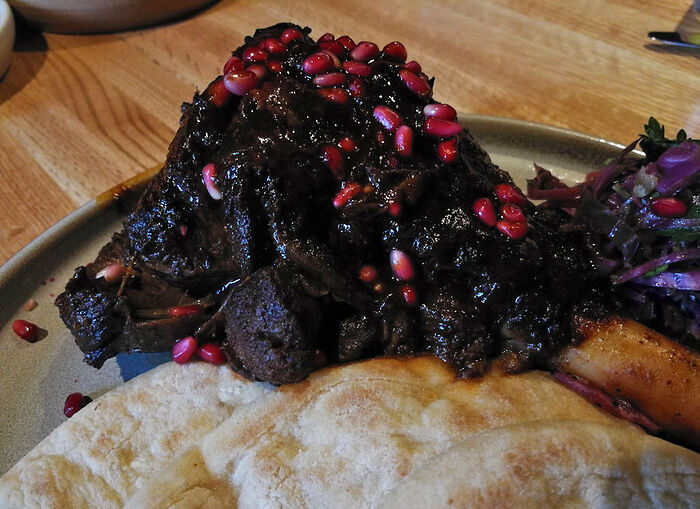 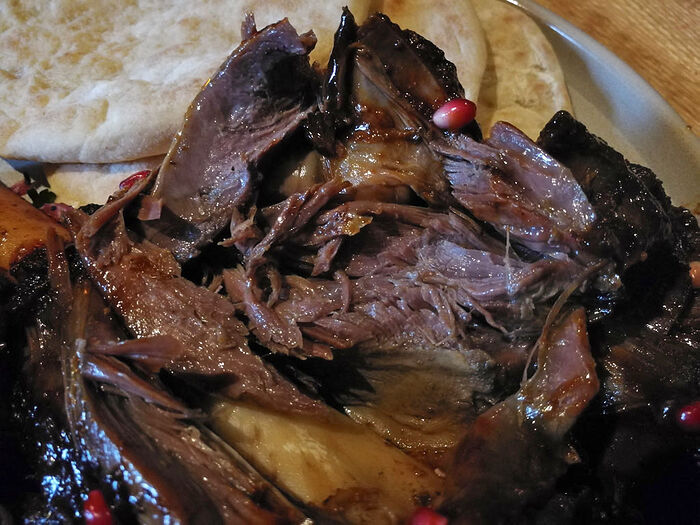 The Lamb Shank was perfectly cooked, tender, fall off the bone and succulent. That was wonderful. However, that’s all it was. There was no “Chile Japones” flavor coming through anywhere, and it could very well have been a standard “European / New American Lamb Shank” and no one would be able to tell the difference. 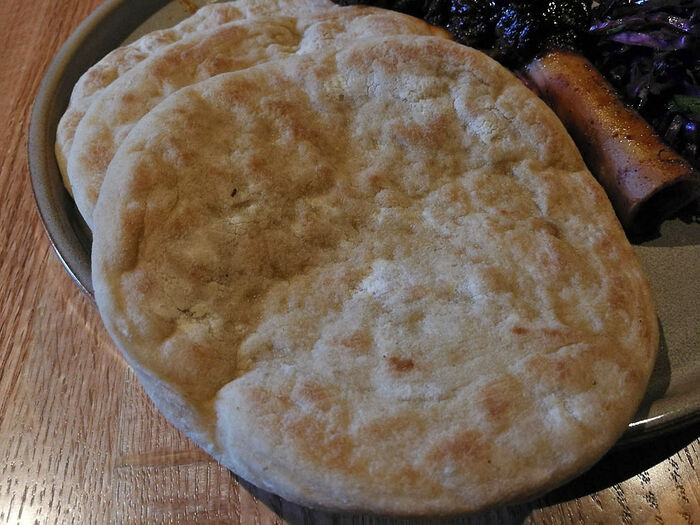 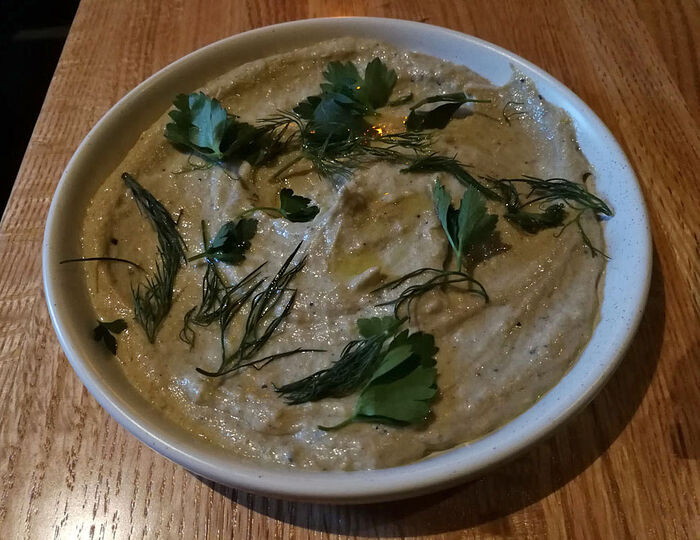 I suppose what made it more “Middle Eastern / Mediterranean” was the Pita and the Charred Eggplant Puree. First, the Housemade Flatbread (very much a Pita) was the same as the earlier dish: It arrived freshly made, piping hot (great!), but still way too thick and bready (probably 250% the thickness of Bavel’s Handmade Pitas).

The Charred Eggplant Puree tasted like the smokiest Baba Ghanoush you’ve ever had in your life. It seriously tasted like you just ingested a dram of the smokiest Islay Scotch Single Malt Whisky (perhaps an Octomore or Laphroaig), except in creamy form.

It overpowered everything, and I love a great Baba Ghanoush.

Overall, Asterid is a bittersweet arrival. We’re happy for the return of Chef Ray Garcia to L.A. We’ve always enjoyed his cooking at FIG and, especially, Broken Spanish. However, from the presentation to the menu and execution, everything feels super corporate and clean and “safe.” The menu is presented in a safe, easy-to-read format, with the main Vegetable or Meat bolded as the dish name:

And while there’s nothing wrong with an easy to read menu, it feels like it continues onto the plate: Every dish felt like it was playing it safe, for the Walt Disney / L.A. Philharmonic Concert clientele who were about to attend the performance next door after the early dinner.

A few fancy sounding ingredients, e.g., Sunchoke Rosti with a Sunflower Creme Fraiche, Strawberry Pepper Jam, when in reality, it tasted like Fried Potato Wedges in a Cream & Strawberry Dip, where the Strawberry Jam was the dominant flavor. Cashew Muhammara tasted like a sweet & tart Hummus-like Dip with some Hot Pita Bread to dip it into. Safe and easy to enjoy.

Every dish was like that, either very safe, or with a big, bold “pop” (along the lines of Guy Fieri for a quick and easy “punch”), but nothing was complex nor nuanced. Contrast this to the dishes at Chef Garcia’s previous Broken Spanish, where he was exploring his cultural heritage, and the difference is night and day. You could taste the passion in his cooking, and Broken Spanish’s dishes were inspired, so full of flavor and interesting.

Here’s to hoping that Asterid finds its culinary voice and passion. Right now, it’s a bit too simple and tame.

That said, one of the better cauliflower dishes I’ve had recently was at Cabra, the mint and the charred cauliflower really played off each other quite well.

Thanks @ipsedixit . I agree, so many cauliflower dishes locally seem to be in a rut.

Thanks for the tip on Cabra.

What else did you like there? Worth a visit? Thanks.

Thanks for the tip on Cabra.

What else did you like there? Worth a visit? Thanks.

Not all dishes were hits (pass on the skewers) but the salads (like the Tomato & Chorizo Salad) and the Cauliflower were quite good.

Sort of what Broken Spanish (rip) in its heyday was to Mexican cuisine in LA.