I’m currently grounded, recovering from hip replacement surgery (I’ll emerge hipper than ever) and hoping someone will Take One For The Team and report on the new Saap Ver restaurant in the design district. I was intrigued by Tablehopper’s description:

While [Chef-owner] Kobe is Bangkok-born, his kitchen has a team from different regions, and each cook is responsible for different dishes, from northeastern dishes like green papaya salad and larb, to another chef who’s on noodle duty. A manager from the team tells me the kitchen is almost like a night market with different vendors, each making dishes that are authentic and some that are lesser known too.

Has anyone tried Saap Ver?

After reading about the street food specialties at this new resto, I headed there one afternoon, and I just could not find parking in the area. I didn’t have too much time to waste so I headed over to old favorite Sai Jai instead.

I’ll try again this Friday, after a happy hour with colleagues at Dirty Water.

It does look interesting. Although the chef/owner does appear to have been one of the cooks at the awful Grand Pu Bah (which also had a “street food” section of its menu), and it has the same phone number. I wonder if it’s mostly a rebranding. …?

Hope you recover soon. You will need to, so you don’t have to eat this at home 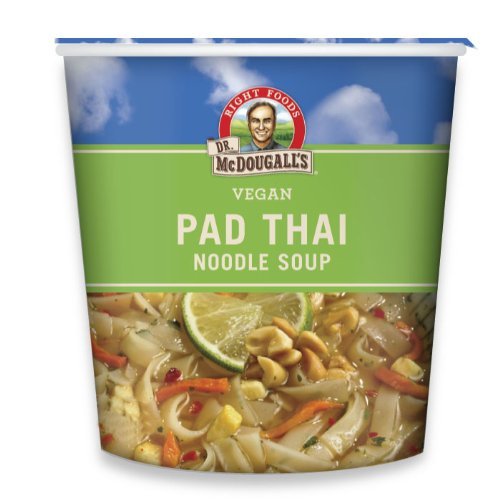 I get plenty of good stuff at home, like this healing pork bone soup, but it’s all in a Shanghainese vein. 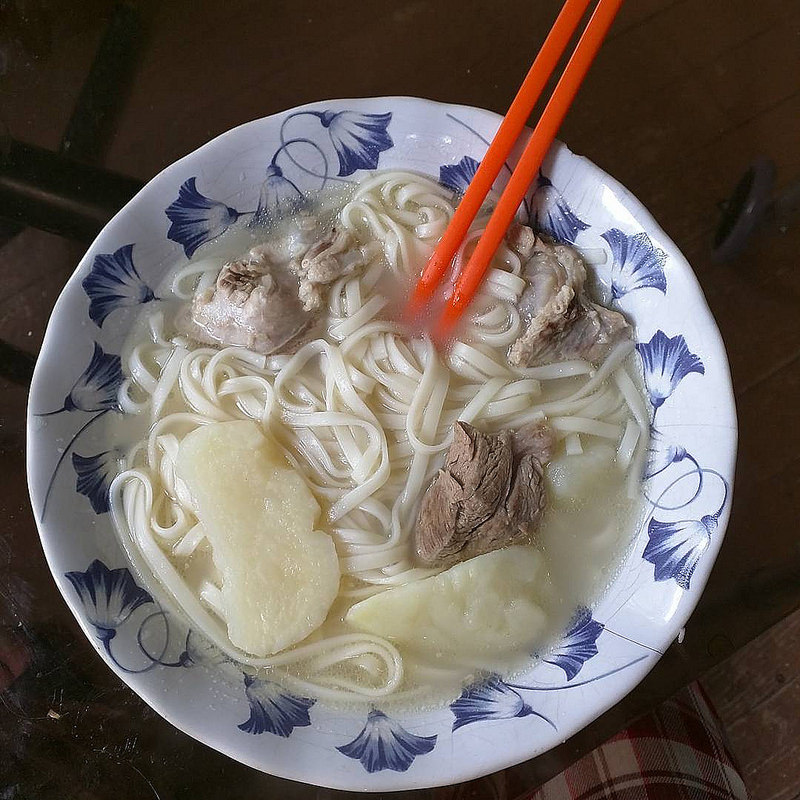 Good stuff indeed. If only more restaurants cook their noodles in stock like these.

Chef is from years at Lers Ros and prior Osha. They are definitely starting out with a more authentic flavor profile. Let’s hope that non-Thai don’t sway the kitchen to ‘farang’ dishes out. A lot better taste-wise from Farmhouse Thai. Wine service looks to be getting interesting. I see a number of good priced selections from Kermit Lynch. They have a big screen showing old Thai films and it does have a cozy ambience. It is now securely in my rotation. You can easily park right in front for dinner, but daytime can be a challenge.

Not sure where you got your info about chef’s prior work. Facebook page for Grand Pu Bah shows him with that team. His own page says nothing about Lers Ros, only Osha, which is highly Americanized Thai food.

Of course, none of this necessarily means anything about the food at Sap Veer. What did you eat there and what do you recommend?

Which Osha? Two sisters own different ones with different concepts. The original noodle location on Geary was I think about the most authentic Thai some years back, not shirking from pigs blood in the boat noodles. Other locations went for more fusion concepts. Did you know there is a super-ritzy Osha opened a little over a year ago in Bangkok?

At Saap Ver, I have had great whole fish, unctuous pork stews, a great Lao Nam Kao Tod, a full-on som tum, larb. I’ve also had a takeout beef noodle soup that did sway too sweet. I hope that people who rave about the food in Thailand stick up for spicy, less sweet, herbaceous dishes that this kitchen can make so they don’t backtrack to supposed farang-palate, dumbed-down dishes.

Glad to hear it, and I’ll give it a try. Not sure the location (an mostly lunch-time work crowd) will be best suited for appreciating more authentic Thai flavors. But at least it should keep the doors open.

@souperman, I usually wait to go to a Thai restaurant until I hear your opinion, so I’m happy to return the favor!

They’ve got a full menu, but the specialties seem to be the ones in the above picture. There’s more than one chef, and the owner is formerly of Lers Ros (incidentally, it’s pronounced something like Lert Rot). 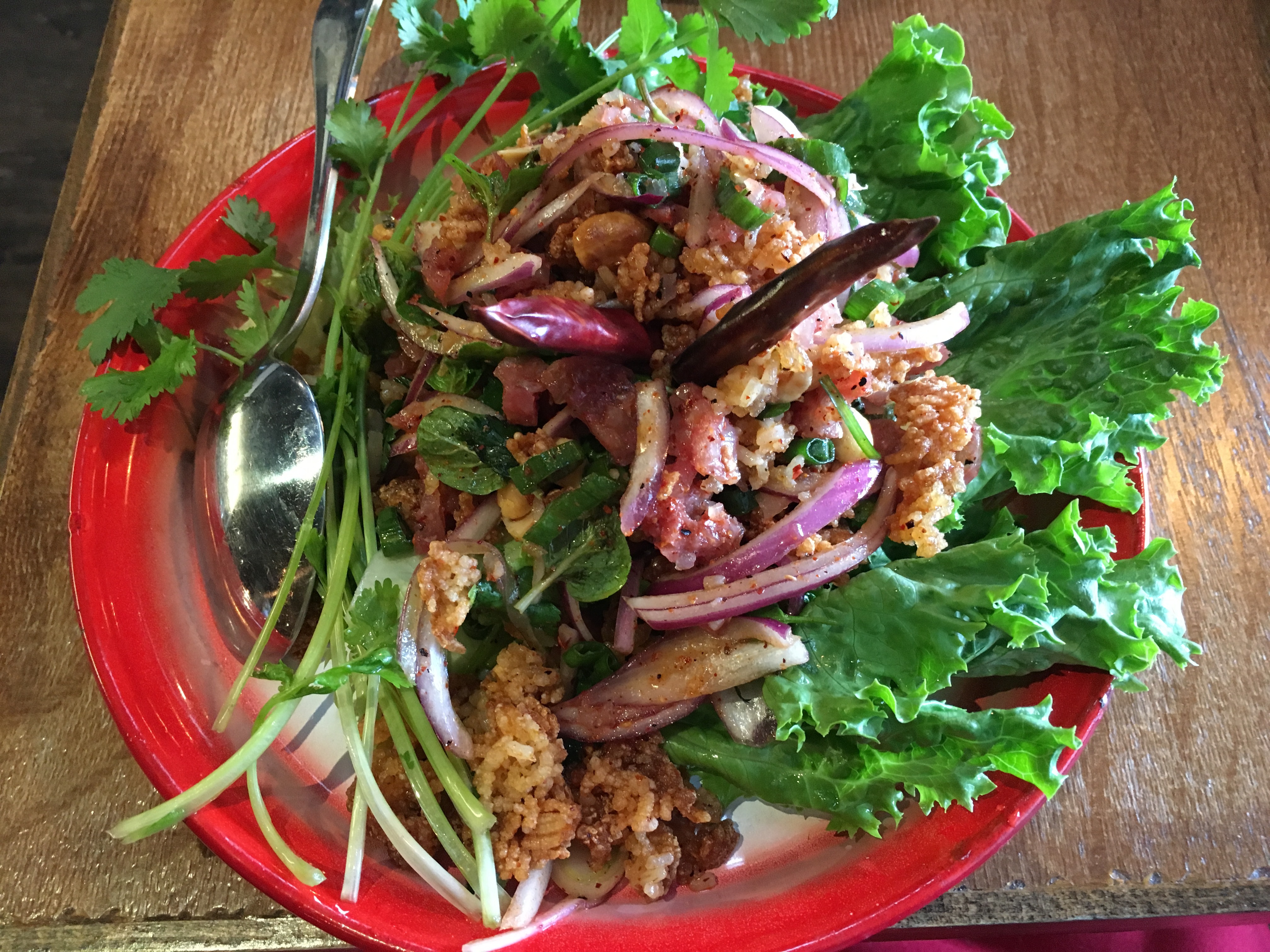 Nam khao tod had big chunks of fried rice balls, which carried the dish. The sausage didn’t have a role though— the fish sauce dressing masked its flavor, and it’s texture got lost amid the soft and crunchy parts of rice. 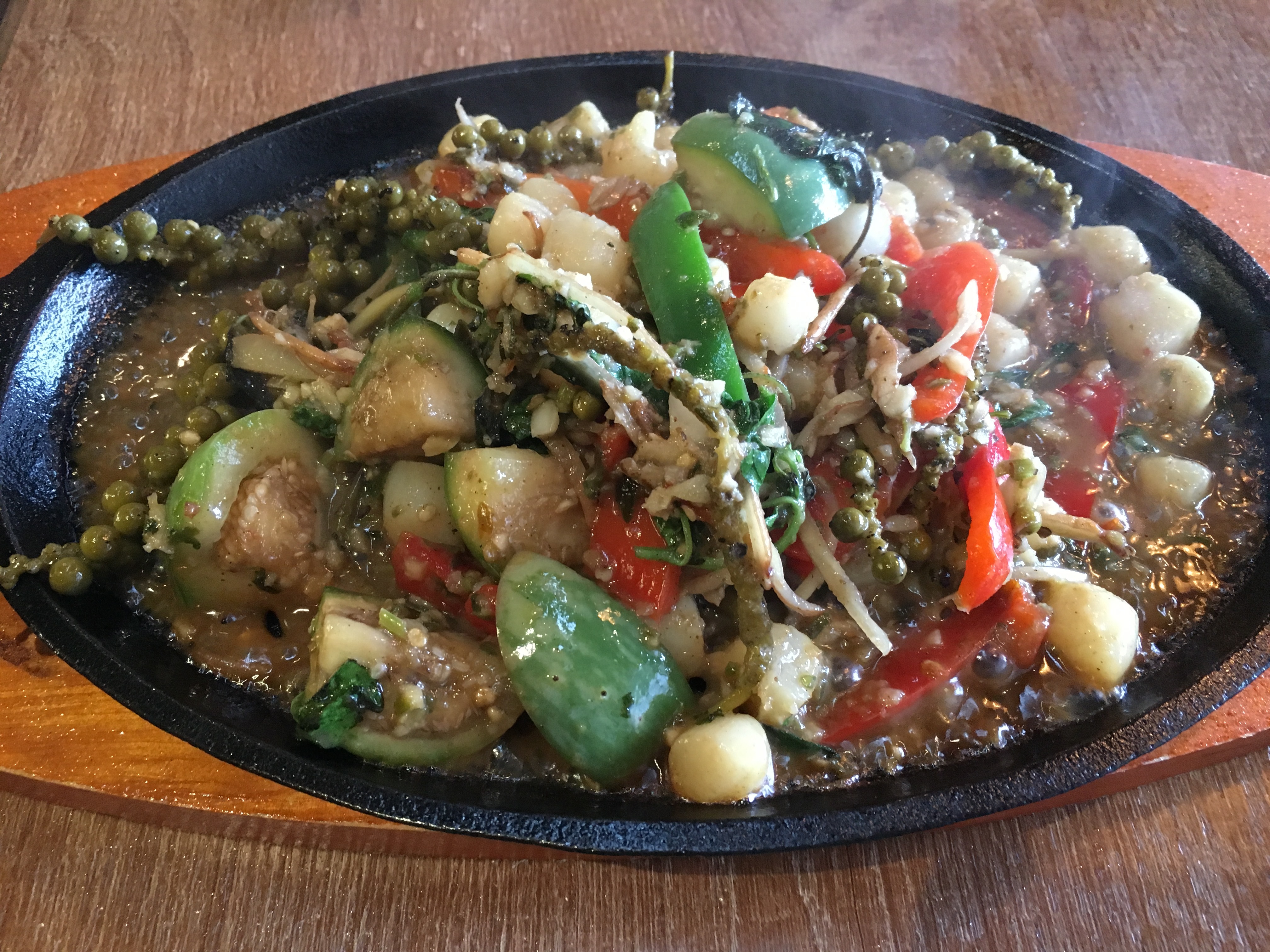 Pad cha scallop pulled no punches spicewise. My favorite part was the pea eggplants, which took on the flavors of all the aromatics and the scallops to some degree.

Thanks. Saap Ver has a website, but no on-line menu, and this is over my head:

An abundance of Thai restaurants name themselves as “Thai Something” or “Something Siam”, or make claim to being “tasty”. Saap Ver trumps the latter battle with its component words Saap meaning “delicious”, and Ver meaning “overly”. Saap Ver thus translates to the playful modern Thai slang term for “Over-the-top Delicious” — think of Nigel Tufnel maxing out Spinal Tap’s amps.

Noodle offerings appear slim and generic based on a pic of the menu posted on Yelp. I guess Pak Nam is in line to be my first post-op foray at the moment.

That’s right-- the server didn’t point out the noodle dishes when I asked her about the restaurant’s specialties, and my assumption was that they’d be Americanized. I don’t recall the noodles at Lers Ros being remarkable.

Their menu is now up on an expanded website.
http://saapver.com/

Based on this post, I went to Saap Ver a couple of times over the last two or three weeks. Bottom line, I like this place a lot. The food doesn’t seem Americanized, and on my visits many, possibly most, tables were taken by Thai-speaking parties. I had:

This place does not have boat style beef noodle so that allows me to order other things. Convenient stop on my way back from the airport too, more so than the Tenderloin places. Price point about 20% higher though. Service was a little slow on my visits, especially as more tables came in I could see it being a problem.

Finally made it over there. Liked the old Thai movie theme. Interesting menu, although we stuck to a few favorites. Unfortunately, it wasn’t very impressive.

We had sea bass clay pot, which was tasty except for the fish itself, which was not fresh. Pad kee mao was ordinary, ordered it with tofu, which was dry and hard. Noodles were soggy, not chewy. Pad red chili was more tasty, but nothing special. Lao style papaya salad had way too much msg, according to my Lao other half, who was not impressed at all.

All this was additionally marred by the guy managing the front of house yelling across the restaurant at one of his waitstaff in Thai to (approximately) “Use your brain, do you have a brain? You need to have a brain if you are going to work here!” The waitress was visibly shaken and, of course, humiliated in front of the customers, many of whom were Thai. He appeared to make nice to her later, but it was totally inappropriate and unacceptable.

Thanks. That’s really “taking one for the team.”