You know how it is with some places. You go quite regularly and then life intervenes and you sort of forget about it. Well, that’s how it’s been with Jaffa. Life’s committments intervened to rule out lunches, then Covid intervened so it was 2018 when we were last here. Thankfully, nothing has changed.

It’s still the bright cheery place – mainly a takeaway but also with tables for eating in. There’s still good lamb shawarma – none of the processed meat of the doner kebab places, just tasty shreds of meat with a bit of fat to keep it moist and tasty. It comes with a little salad, ferocious chilli sauce, a spoonful of cacik and a flatbread. And my companion’s small mixed mezze (there is a large one) was also as good as ever. There’s battata harra – potatoes in a spicy tomato sauce; chickpeas in yoghurt; tomatoes in a slightly spicy sauce, an excellent tabbouleh, some the mixed salad, cacik, houmous, pickled chillis, olives and a flatbread. And it’s still and absolute bargain - £11.50, including a couple of canned drinks. 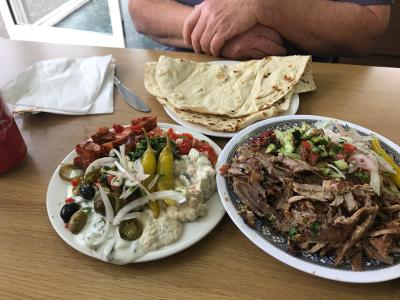 none of the processed meat of the doner kebab places

Still something about that stuff I love late night in the UK - the red sauce too – just not the same in the USA.

This must be the first time I see you photograph your food.

It’s stood the test of time.

This area of Rusholme, along Wilmlsow Road, is well known as the “Curry Mile”. Going back maybe 40 years, it’s where the first South Asian restaurants set up. So it’s where many people experienced their first curry. Jaffa was one of the first Middle Eastern kebab places to set up - probably 20 years ago. Nowadays, every suburb has its “Indian” restaurants and there’s no need to make a trip to Rusholme. So, there’s now comparitively few South Asians left - we noticed yesterday another appears to have closed. But premises have been taken over by other ethnic groups so there’s actually a more diverse mix of eateries. Like Jaffa, there are other Palestinian places. But also Afghan, Iranian, Lebanese, Malaysian, etc. And not just restaurants and takeaways but shisha bars as well. It’s become a vibrant area again after a period where it just felt it was getting seedy. It’s now definitely the Kebab Kilometre and not the Curry Mile.

And it’s still and absolute bargain - £11.50, including a couple of canned drinks.

Indeed for 2, with lamb, and drinks!