We pass Rosa’s Kitchen occasionally and even pulled into the parking lot once since their sign advertises empanadas but they weren’t open. When they popped upon my Instagram feed and since the food and menu looked good we decided to stop in for dinner. I thought they were a new restaurant but they have over 2000 Instagram posts. I scrolled through and it looks like they had a booth in the Collingswood Market before moving to their current location just a bit south on Route 34.

Their menu is primarily Puerto Rican and Southern and is posted on Instagram daily. I had the Puerto Rican Combo plate which included Pastel (like a tamale but the dough includes vegetables such as yucca, taro, plantains and banana), Pernil, Chicharron, Spanish Rice and Beans, and Sweet Plantains. We also had barbecue beef ribs, beef and chicken empanadas, mofungo with chicken (it had the best garlic sauce) and alcapurria which is similar to the pastel. Mr Bean and The Sprout started eating before I could get pictures. 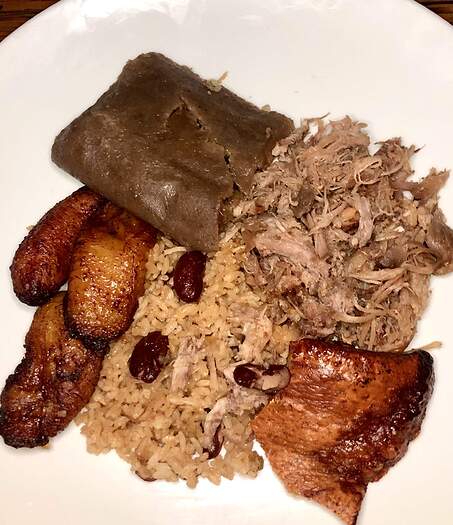 I don’t know much about Puerto Rican food but we all enjoyed our meals and are looking forward to going back.

That sounds really delicious! What was your favorite out of everything? And did you end with any empanadas at all?

Isn’t this the location that had that donut shop at one time?

No empanadas left - they were all tasty. I liked the pernil a lot. I did not care for the alcapurria but the others did.

Yes, it’s that location. It was also a Jamaican place for a short time after the donut place. It’s kind of a pain to get to if you’re coming from the south but worth it.

I took out some food early in the Pandemic. I don’t recall anything noteworthy, but this sure looks good.

It was good. I’m not familiar with Puerto Rican food so I have no idea how Rosa’s compare to others. That being said we all enjoyed what we ate, the women running the place were really nice and “safe” and given the lack of variety close to home it will be a nice addition to our list of places to get food.

Michelle stopped here and brought home a couple of empanadas which were terrific. Both the crust and the filling were very good. Looking forward to trying more items.

I picked up a few empanadas from Rosa’s yesterday. I got two each of beef, chicken, and garlic shrimp. I enjoyed them all, especially the garlic shrimp. Well worth the trip!