We’ve got two new Indian places ( and actually new, not some other town’s retreads ) in the last months, Rooh and Ettan.

Rooh is in the “cursed space” inhabited by many other Italian restaurants. The longest period was Coppola, but there were several other names, I think the last was Belle Arte. We’d stop by sometimes, often if there was a game on - it wasn’t a sports bar by any means, but always was convivial.

Rooh is a redo of the space, notably adding a large open hearth, and thus adding a substantial new capability to the kitchen. Sure, we think of the Tandoor, and maybe we think of skewers, but when you add in substantial roasted vegitables, the food starts getting interesting.

The food has the boldness of strong indian food - in the same way I would consider local favorite Zareen’s. While Zareen is closer to more standard northern indian dishes, the long lines are based on the fact that every dish has a zing to it. Rooh has some similarities, in that dishes just spring off the plate. Cocktails are also punchy and different.

The night we went ( only one visit so far ), we sat at the bar, and at least half of the patrons were indian-heritage. I’m not saying “it must be a good restaurant because there were indians”, but more that the local palo alto / los altos / atherton habituees includes a lot of wealthy indians who can appreciate trends in modern indian food, which I think accounts for the bolder tastes.

Ettan had its first opening weekend in the old Three Seasons space (closed due to fire for two years). We had always liked Three Seasons, so when we exited the Kurasawa flick at the Stanford, I proposed heading over. Rather officiously, and with a nearly empty restaurant, they said they wouldn’t serve us any food, but would serve us drinks. They stated they were in “reservations only” mode because they were working the kinks out, which I can appreciate. There’s a rather scathing review on Yelp from someone who felt much more offended, that wasn’t me.

Thus I can only review the atmosphere, the drinks, and the smell of the food.

The place is decidedly more high end than any other place I can think of in Palo Alto ( ok, I haven’t been to the fancy Korean tasting menu place, and don’t hang out at Nobu, and Madera is in Menlo Park ). The revamp was a HUGE revamp, removing the rather excellent very old bar ( I bet those things sell for a lot when they are authentically old! ), additional modern art, custom wallpaper, and moving the bar from the back to one side. Once spring hits and one can sit outside in that pleasant courtyard, I’m sure the place will be mobbed, simply because the atmosphere is so good - but they’ve also created a Temple To Food atmosphere that’s a bit stuffier than I actually like. That is, I’ll suffer through it if the food is good.

My original impression - which I hope is wrong when I taste the food instead of just smelling it - is not favorable. The drinks, for example, seem mostly california-inflected than indian. The naan looked more like ordinary nan. The menu had lots of Interesting Bits but after seeing the menu at Rooh - it really seems more mostly-californian-slightly-indian rather than the 29th State Of India vibe I got at Rooh.

If I was to cast aspersions, it seemed like a very LA restaurant, in not-a-good way. I love eating in LA, but there’s that certain kind of see-and-be-seen place with only moderately good food that I’d call the curse of LA ( balanced out by a massive number of punchy and interesting local eateries ). But is my inner snob-of-snobs showing? It looked bougie and instagrammy, so the food must not have been good? I hope I’m not getting that way.

The cocktails were pretty good. The bartender was from Milan, I think he said he came in from New York, and said that “indian isn’t his first favorite in types of food” and “it’s been interesting trying to pair with these tastes”, and perhaps that threw me a little. He also used exactly the same phrase as in the Palo Alto Online article about “we’re not focused on getting a michelin star”, which is a particularly manipulative way of talking about it without talking about it, eh?

I’ll finish up by saying anyone who hasn’t been to the phenominal Zareen’s, now in their larger Cali Ave - Palo Alto location better come around 11am or about 2pm, that’s when there’s minimal line. The local office workers ( me included ) love it. The prices are terribly high for what you get, but the portions are small in a good way ( just right for lunch ), and the flavor is huge. If it wasn’t crowded I would eat several meals a week there.

Look forward to any other comments — it’s interesting to have two restaurants in the same genre opening within such a short period.

( And, my most looked-for opening will be the new cocktail place that’s part of Zola. I happened to get a ride with a Lyft driver who is part of Zola, and it sounds like it could be good. )

Rooh Palo Alto is a sister restaurant to Rooh in SoMa. I haven’t been to either and would love to try their food some time. Although the comparison isn’t fair, but I thought the other two ‘progressive’ Indian places in SFBA that I tried are somewhat of a mixed bag- Rasa, August 1 Five. Its long past time that South Bay, with all the expats from India, are getting presumably more discerning restaurants that hopefully will resemble more closely high end food found in Indian cities.

Regarding Zareen’s: ‘nobody goes there any more. Its too crowded’ The wait is seriously annoying. And they don’t take takeout orders too until its like 10pm. I love to eat there more often, since its close by, but just can’t.

Oh, right, Rooh is an import. I had forgotten.

The arc, then, should be that Palo Alto could only create a restaurant like Ettan. Like, say Tamerine, which I did like in the first few years. ( Tam Tam, hard to say if it moves the Sake Bomb Curse ). Rooh, with stronger and more interesting flavors and a touch less schmaltz, had to come from somewhere else.

In other mid-peninsula indian news, Dosa Point is doing quite well on Willow, and has captured the business of more than a few who just want a pleasant meal at a reasonable price.

I was reading Rooh’s web site yesterday and they said the chef was India chef of the year a couple of times. I have no idea how meaningful that is, selection criteria, etc. But I guess having it can’t be too bad. Perhaps someone with knowledge of the India culinary scene can chime in.

I saw him chatting with a diner a few feet away, he seemed interesting enough, I should probably hold further judgement until I actually eat the food. Maybe I’ll click around for a reservation… I do recommend Rooh though ( if you have to eat in palo alto ). My go-to for indian is still aachi aapakadi in Sunnyvale, with backup as Himalayan Kitchen when I want it spicy. If I’m not in Palo Alto.

I will probably head there at some point. I am pretty bored with PA dining recently. But that’s for another topic. Trekking to Santa Clara for example takes so much time.

Rooh SF was the first in a series by this restaurant group iirc.

The NYC restaurant was next - called Baar Baar (for some reason they decided to change the name even though the menu was identical).

Looks like the Palo Alto menu is focused on the grill, with a few menu favorites from the original.

Baar Baar was my favorite modern indian place in nyc - well for about 6m - until the expansion plans came calling and the head chef left to open a New Delhi restaurant, and then a Chicago one. Looks like they’re on pace for one a year, given Rooh Palo Alto now.

The food in nyc suffered significantly once the head chef moved on to the next project. Curious how the others fare over time.

Looks like Ettan got some Eater rewrite the PR package coverage, useful to see what the menu and prices are. 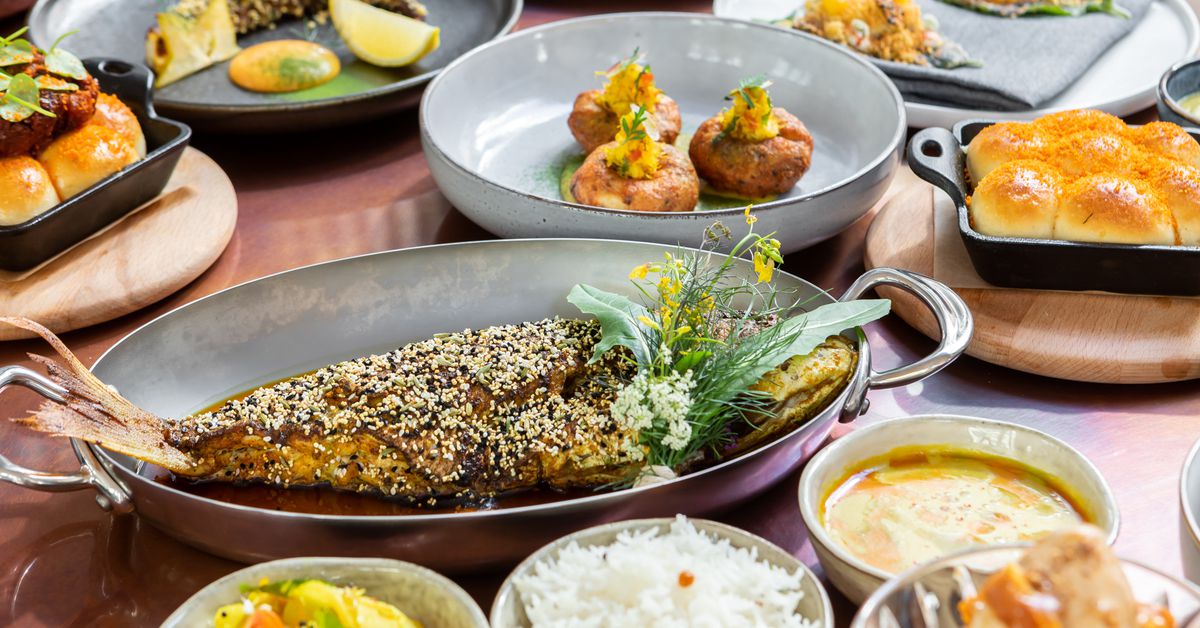 Ettan Shines the Light on Cal-Indian Cuisine in Silicon Valley

Did Campton Place become more Indian in recent years? It was years ago when I ate there when they had a star and it felt Californian.

Do you mean did it become more "Indian"since Chef Gopinathan arrived, or was he there the last time you ate there?

When did he arrive? The meal was a while ago, so I couldn’t remember whether he’s at the helm already.

Rooh has a takeout menu during the Shelter in Place Order. I had their food a couple of times. Both were splendid.

On the left was Chicken pepper fry, slathered with an lemon aioli. Well fried. Came with a peanut chutney. Pretty nice dish. On the right was the splendid Goan Prawn Masala Curry. Their spicing was spot-on. Nothing more, nothing less. Just a delightful chorus of spices, which includes kokam in an onion/ tomato based curry. This curry was the best dish we’ve had for months. Easily a few tiers better than the popular Zareen’s on Cal Ave, which we buy from often enough. Of course, the prices are also higher than Zareen’s. But its good that Palo Alto has some good high end Indian now. I personally rate Rooh higher than Rasa in Burlingame and August 1 Five in the Civic Center neighborhood in the city. 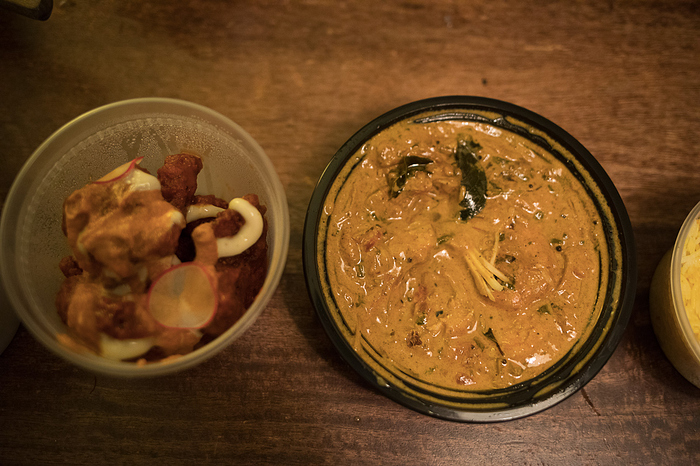 The right hand side dish was some sticky rice based dessert whose name I have forgotten. Also pretty good. 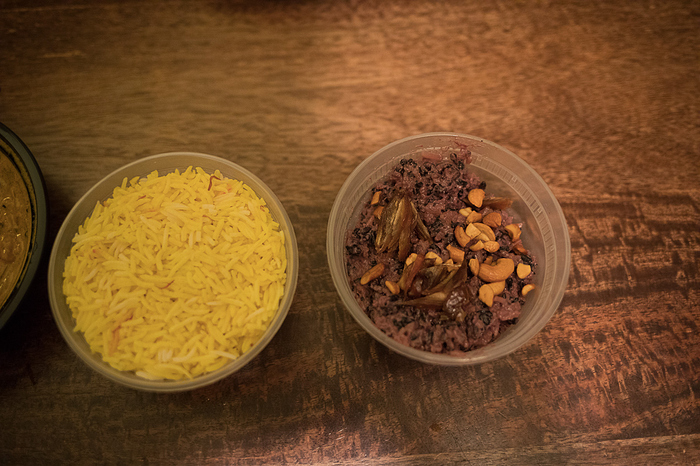 Its clear they are struggling for business a bit these days. Help these guys out if you feel like Indian. Their cooking alone deserves plenty of love.

Concur about Rooh. Twice post-covid for the takeout and the texture of the tastes is always superbly above what else is on offer in the area. Also had that Goan Prawn dish, very very nice.

Thank you for comparing the two, especially to Rasa’s. We’ve been to the latter but never to Rooh or Ettan, so I had been wondering how they all compared to one another.

One of these days, we’ll hopefully get back to traveling and be able to stop at Rooh.

And, I tried Ettan last week end. Such a different kind of menu. Instead of bold lucious spices, it’s much more “cal-indian” with bold veggies. I think I like Rooh better, but there’s a place for both.

What kind of veggies do they use at Ettan?

The most interesting dish we had from Ettan was an asparagus pongal. It was a main, and it was very rich, and good california asparagus with lots of tasty little veg around it ( like microradishes? ). NOT a salad.

Lamb shank nihari was excellent. Succulent lamb. Nuanced and balanced nihari sauce. I am sure the dish looks better on a plate but it was great. The nihari sauce are steps above the nihari served at Zareen’s. Zareen’s nihari is no slouch either. 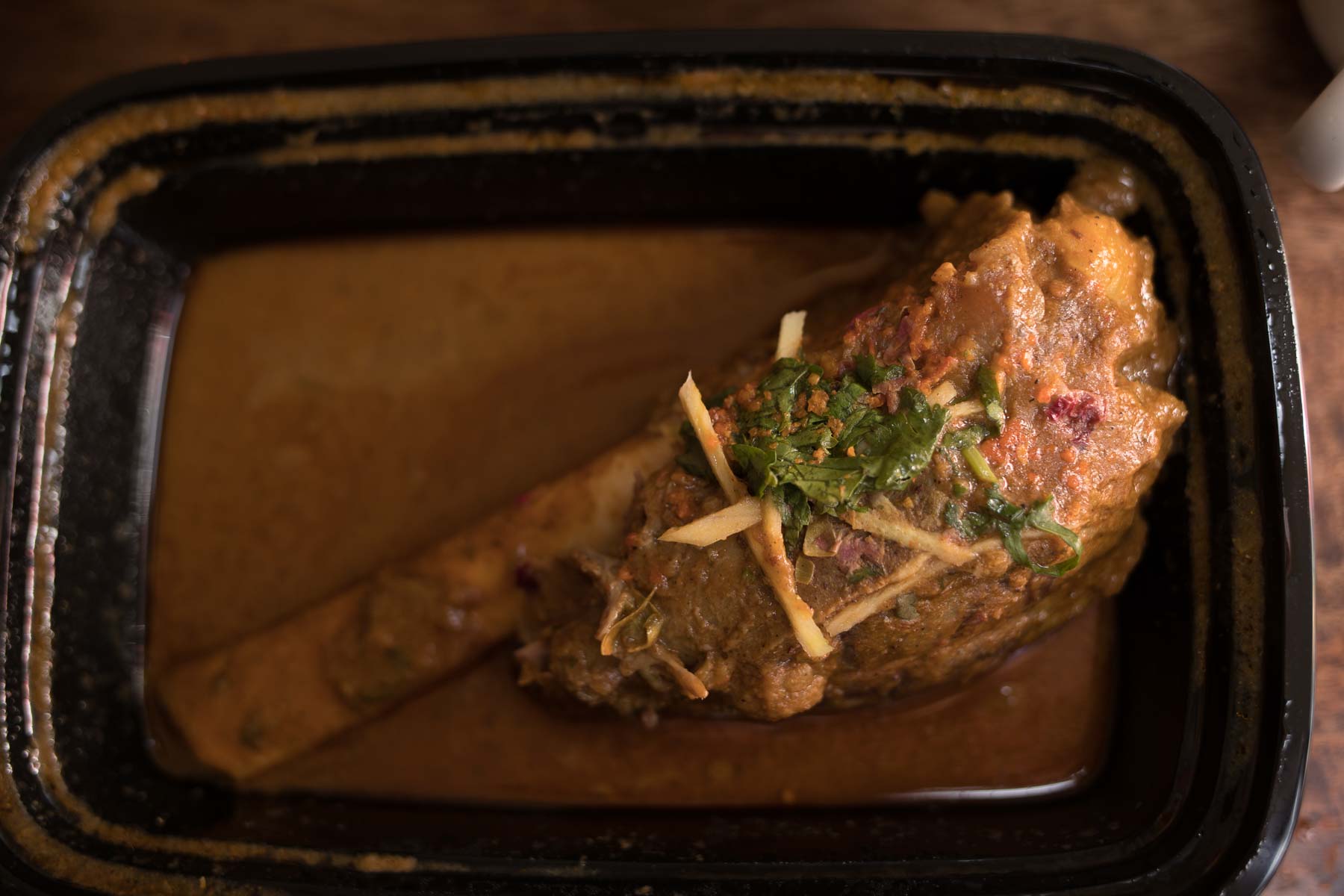 Chicken pepper fry. Quite a decent appetizer. Though after having a couple of meals here, I liked the mains quite a bit more and will be sampling through more of their mains menu. 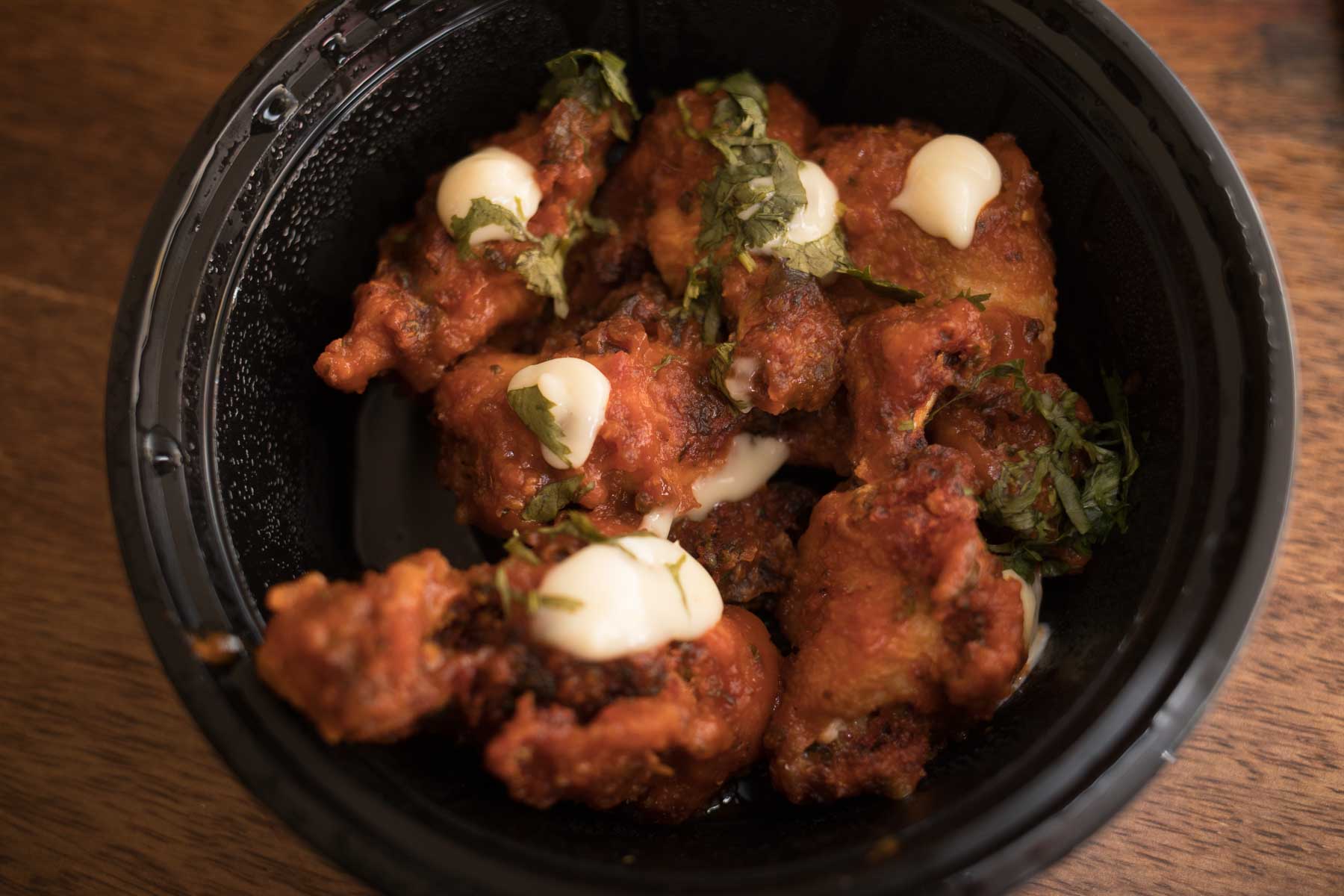 Rooh is doing quite the outdoor business. Their section of the “summer streets” closure in Palo Alto this weekend was fairly busy.