Roasted Lamb and Chicken over Fragrant Rice, Delicious Fava Bean Stew and More - The Cuisine of Yemen at House of Mandi [Thoughts + Pics]

One of the sad losses during the pandemic in 2020 was the closure of Olive Tree Restaurant. A delicious Saudi Arabian specialist, it couldn’t hold on with the reduced business. So it was a pleasant surprise to learn that in 2021, a new restaurant sprung up in the old Olive Tree spot, but this one was a specialist focused on the cuisine of Yemen, called House of Mandi. 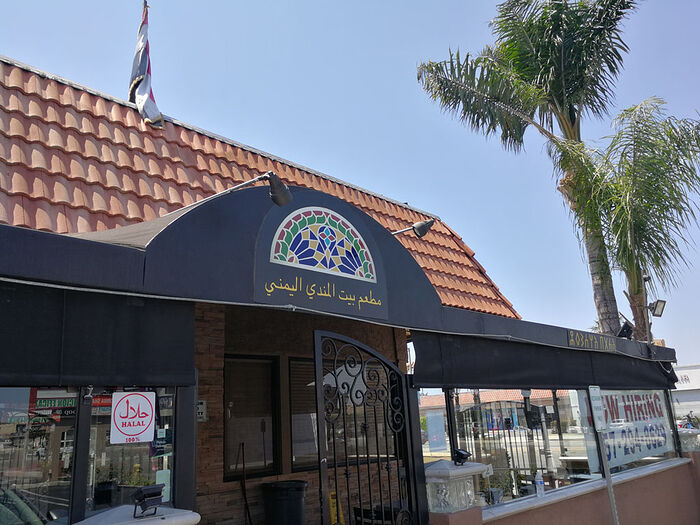 Walking inside, and there’s been some extensive remodeling and the waitress mentioned that the cushioned seating on the right side followed traditional Yemeni style seating to enjoy a meal: 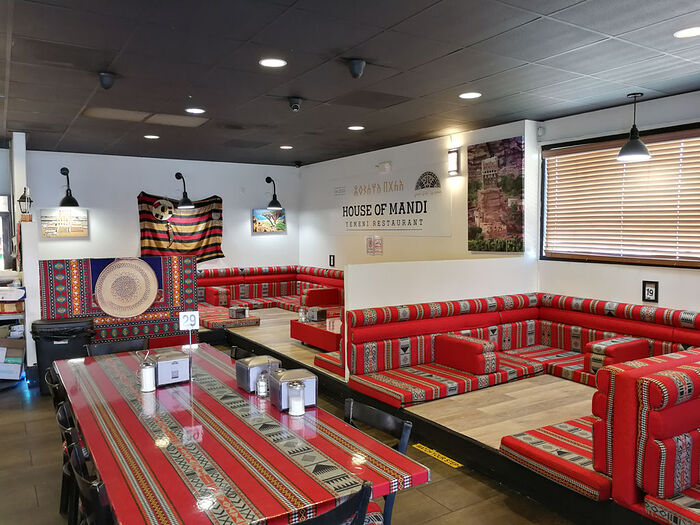 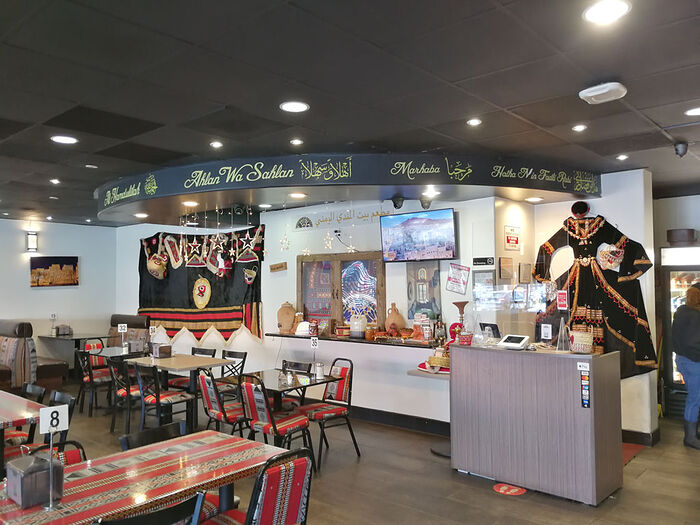 We’ve never had Yemeni cooking before, so this sounded exciting and we couldn’t wait. 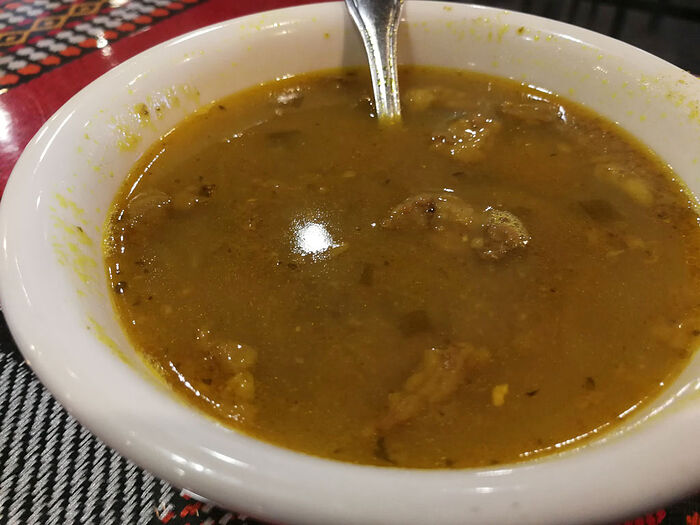 The complimentary cup of Lamb Soup is earthy, herbal, lightly gamey and tasty. Something like the Consomme Lamb Soup served with Barbacoa de Borrego (Mexican Roasted Lamb) might be gamier in its taste (but still delicious). Here, the herbs and spices, especially Cumin, are more at the forefront. 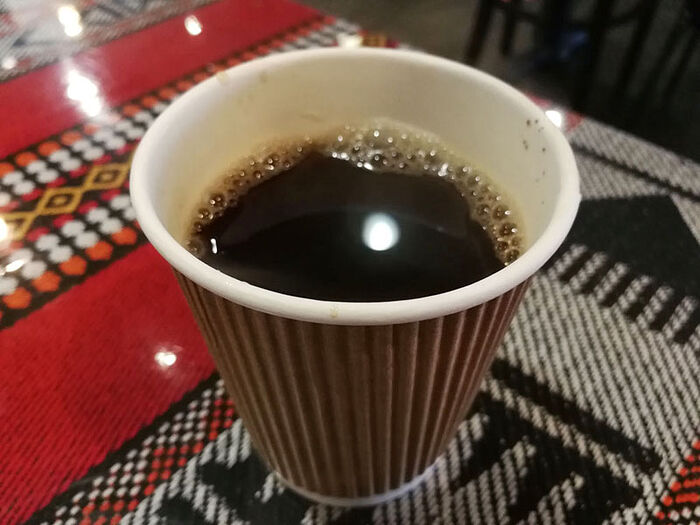 Imported Tea from Yemen, this is nutty, earthy and smooth. 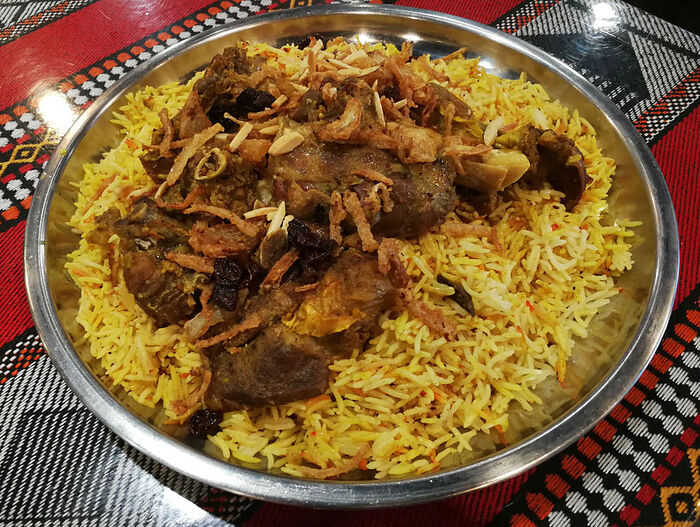 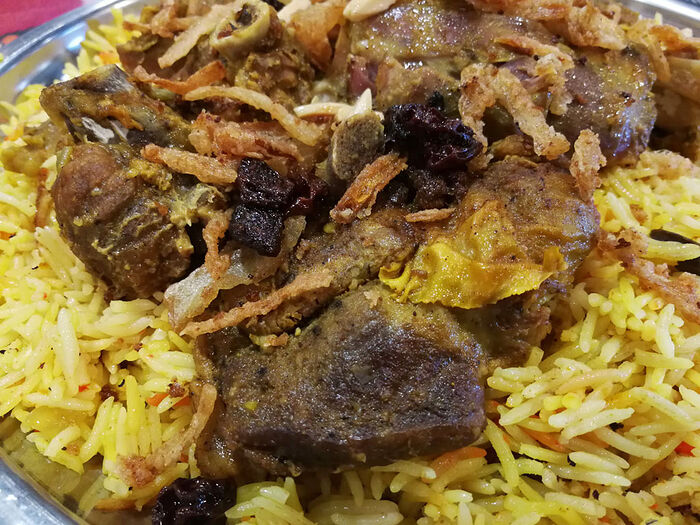 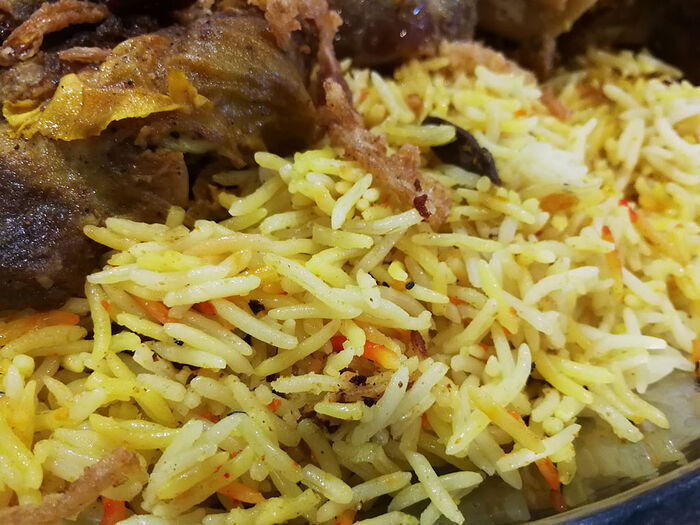 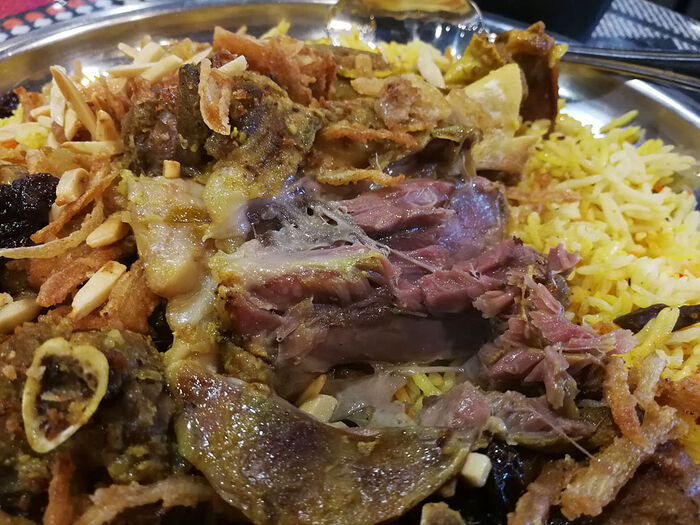 One of the highlights from the menu was enthusiastically recommended by our server: Lamb Mandi, which is a traditional dish from Hadhramaut city in Yemen. As it arrived, it’s a massive serving of slow roasted Lamb piled high on top of their Mandi Rice.

The Mandi Rice that accompanies this Lamb dish has Turmeric as the main star, with Dates and Roasted Almonds as well for additional flavor. Overall it’s delicious and one of the highlights of the menu. 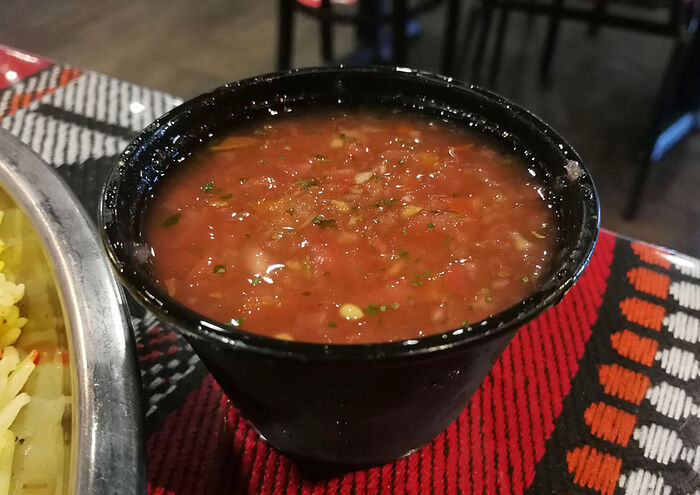 The “Yemeni Sauce” turns out to be a Yemeni version of Zhoug / Skhug the fragrant spicy sauce seen at various Israeli restaurants around town. House of Mandi’s version looks initially like a Salsa Roja,

but tasting it, you realize it’s got that fragrant through line to Zhoug / Skhug. A nice pairing with the Roasted Lamb.

Hrada Of Seltah (A Traditional Dish from Sana’a City in Yemen. A Fresh Vegetable Stew with Okra with Potato Mixed with Ground Beef Combined with Whipped Fenugreek. Served Bubbling Hot Cooked in the Traditional Yemeni Vessel made of Carved Stone. Comes with Yemeni Bread and Yemeni Sauce): 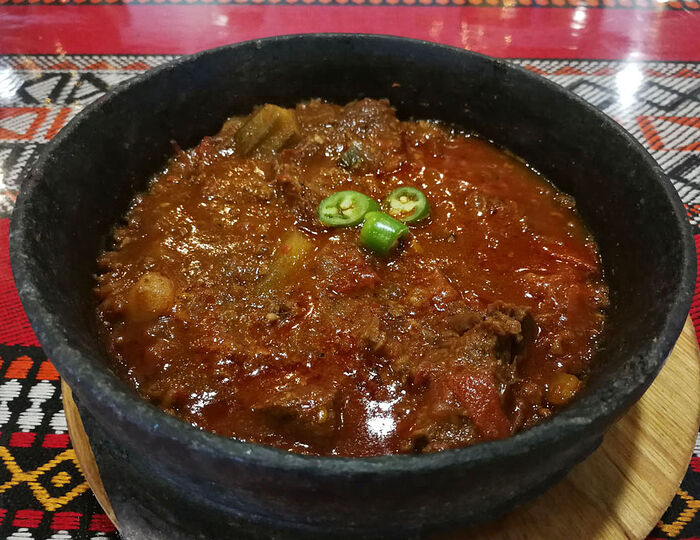 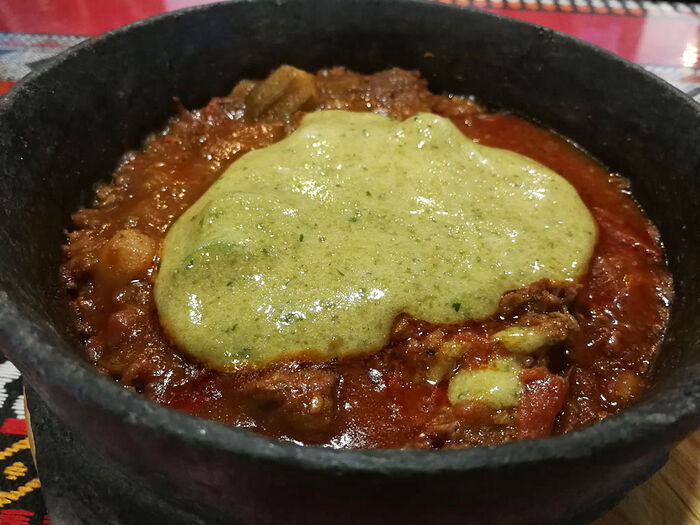 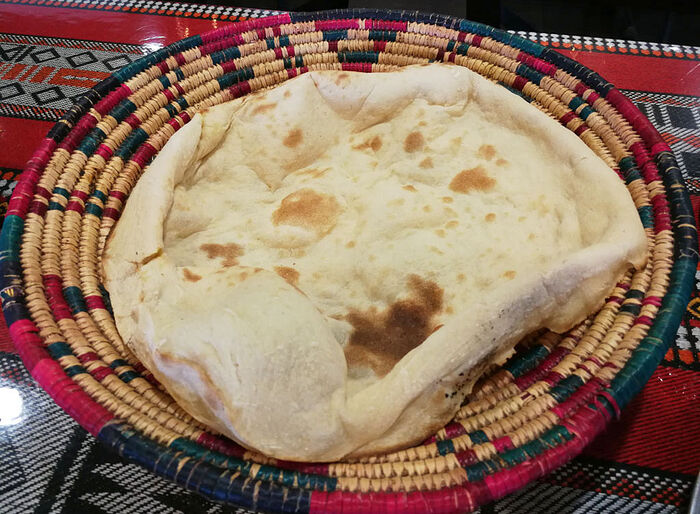 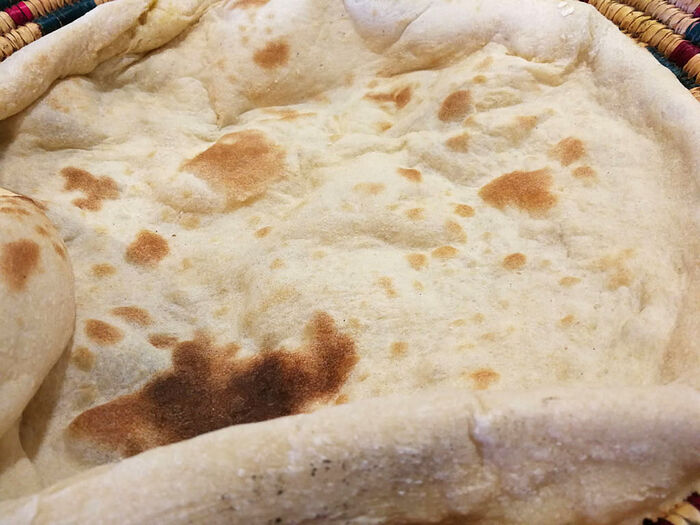 Hrada Of Seltah turns out to be a traditional dish from Sana’a City in Yemen. This was a fascinating flavor profile: Stewed Okra & Potato (and additional vegetables) are the star here, and while there’s meat as well, the main flavors are of fragrant Cumin with a bitter, savory, Celery-like aroma. It’s warming (as it’s served bubbling in the heated, carved stone bowl).

One note: The Whipped Fenugreek is amazing! This is a vegetable where some component of it is whipped into a consistency that is like a thick Cream, but it’s totally just Fenugreek (so no dairy). It adds a real creamy component to each bite, while also giving it a nice fragrant herbal quality.

The Yemeni Bread is made fresh in-house, and it’s like a massive giant Naan Bread, but earthier and a bit denser. It’s easily the size of an 16" Pizza or so. It’s soft enough to pull off a piece. 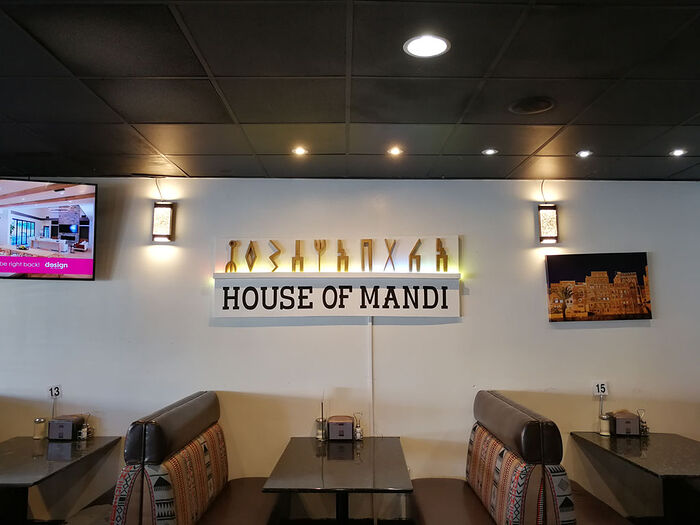 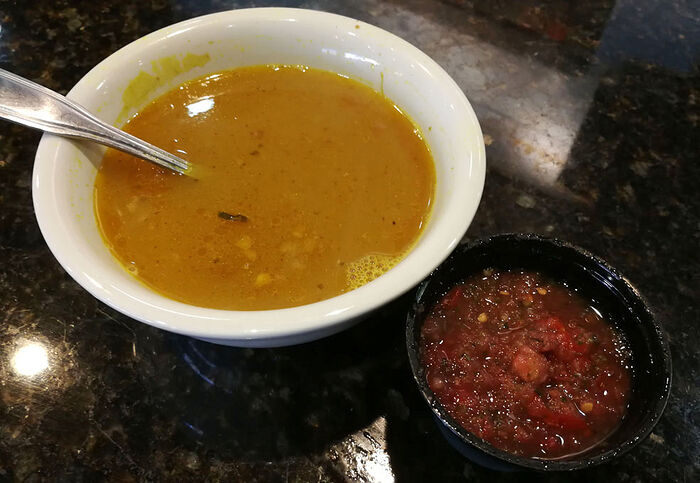 As delicious as before. A great starter. 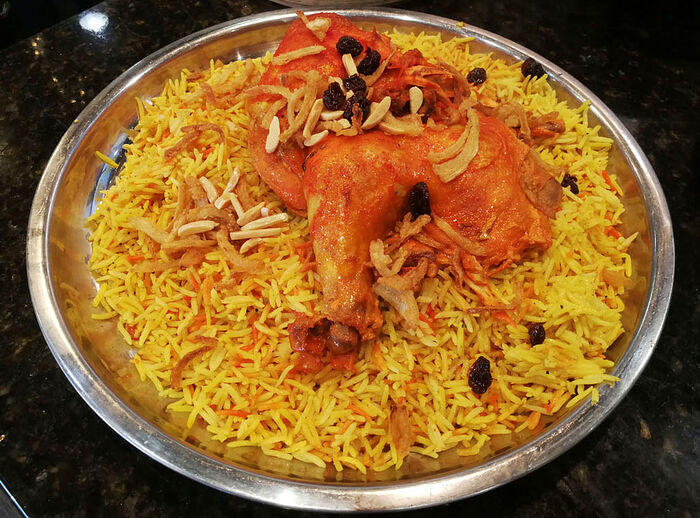 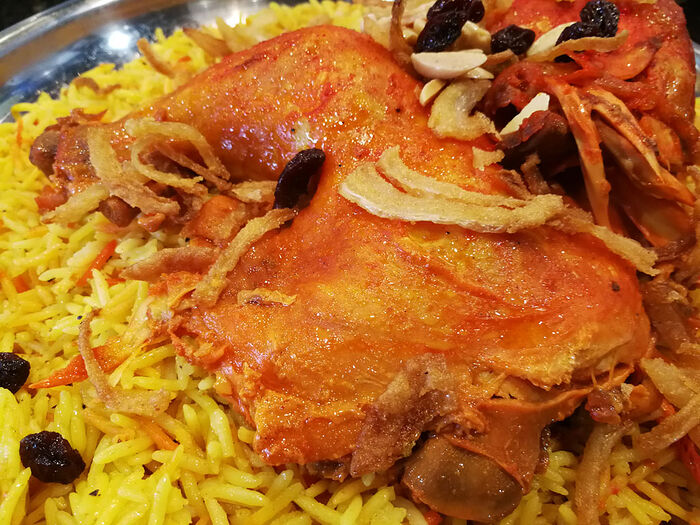 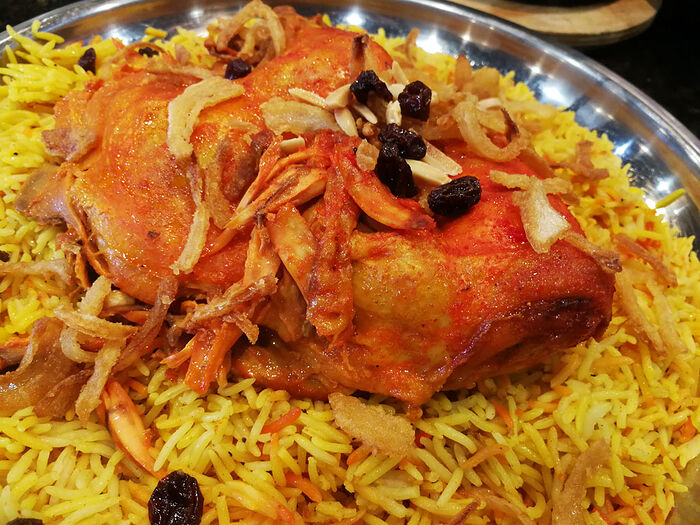 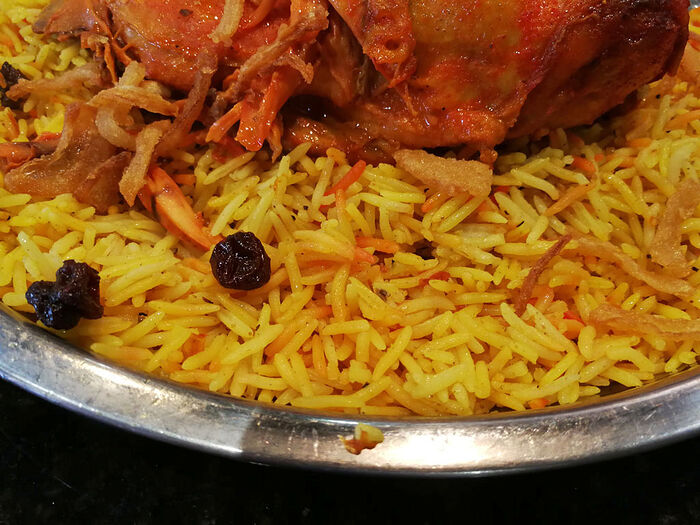 While ostensibly the same dish as Lamb Mandi, but with Chicken, while the Mandi Rice was the same (Turmeric-stained), with Roasted Almonds, they used Raisins instead of Dates, and the Roasted Chicken was a totally different set of Spices.

Here the Roasted Chicken had a Yemeni version of “Curry” (according to our waitress) - but this tasted nothing like Indian, Thai, Japanese or Chinese Curry offerings - along with Saffron and more zesty notes. The Chicken itself was moist and juicy, both the white meat and dark meat portions, which was fantastic!

We liked the Chicken Mandi more than the Lamb overall, but both are worth ordering. 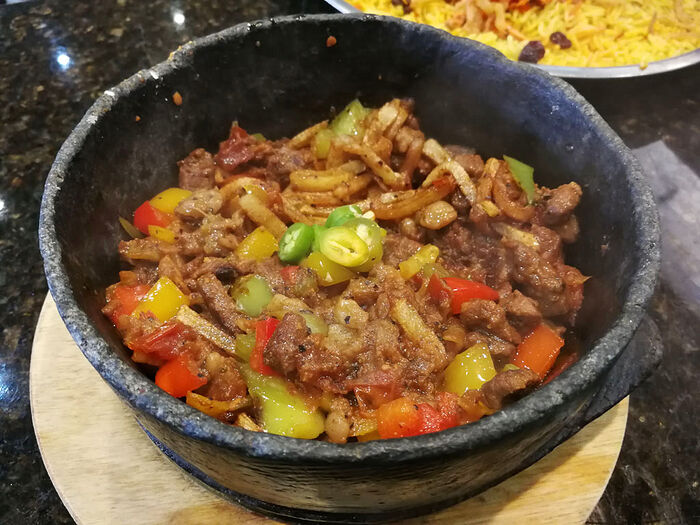 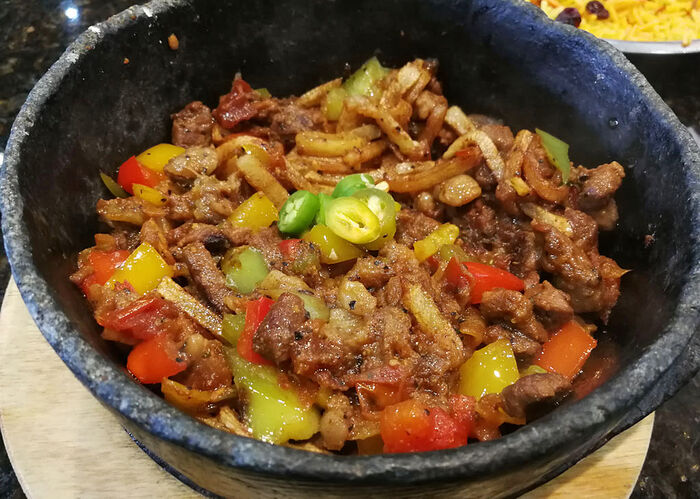 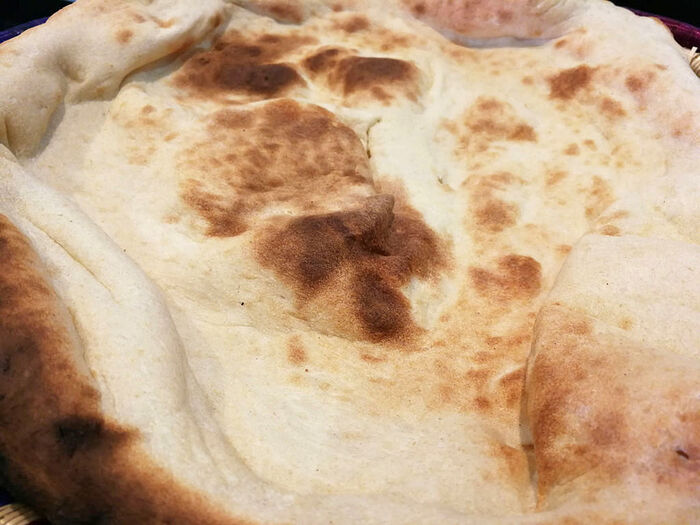 This was tender Sauteed Lamb morsels, in a very savory, fragrant, zesty spice mix. It tasted like no spice mix we’ve had before, but it was also familiar and comforting, delicious bits of lean and fatty Lamb with Sauteed Onions, Tomatoes, Bell Peppers and Parsley.

A really nice pairing with the Yemeni Bread. 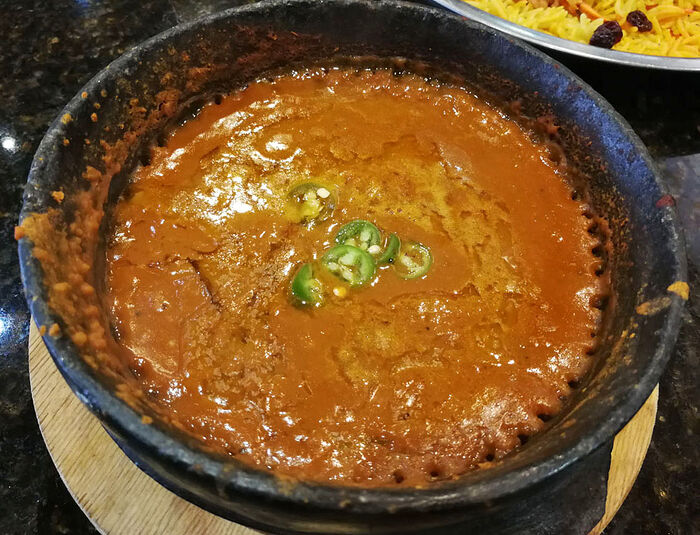 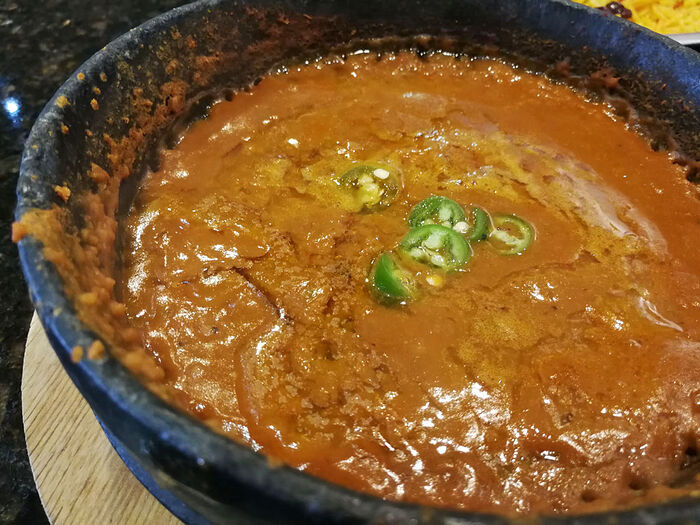 But perhaps my favorite dish might very well be their Yemeni Foul (pronounced “Fool”), which those familiar with cuisine from other places around the Middle East might have tried something similar. The Yemeni version of Foul is a very finely mashed Stew of Fava Beans, arriving bubbling hot in the stone bowl.

The Tomatoes, Onions and Olive Oil lend a classic flavor combination, but the additional spices (the waitress was demure in not wanting to talk about the family recipe) really gives this version of Fava Bean Foul a standout quality. It was earthy, umami, creamy (but no dairy), and just a standout highlight as well.

For our first taste of the cuisine of Yemen, House of Mandi delivered a delightful array of flavorful dishes that were unique and stood out from other restaurants in the area. While they opened in “Little Arabia” and replaced Olive Tree (a Saudi Arabian specialist), House of Mandi’s dishes are noticeably different.

The Lamb Mandi is a standout and while it might look sort of similar to the Kabseh Rice of Olive Tree, it’s a totally different flavor profile. In the end, I think I might prefer the flavor spectrum of Kabseh Rice (the Saudi Arabian Lamb & Rice dish), and Baghali Polo (the Persian Lamb & Rice dish) a bit more than House of Mandi’s Yemeni version, but they are all totally different for flavors and really worth trying.

The Chicken Mandi is definitely different and those loving flavorful, slow-roasted, moist Chicken would do well to seek this out. In addition, their Hrada Stews are unique and standout, with the Hrada of Seltah (with Stewed Okra, Potatoes and Ground Beef) being another nice dish.

The Yemeni Foul (Fava Bean Stew) might be the hidden gem and definitely worth an order. House of Mandi offers a rare taste of Yemeni cooking and we’d be glad to return to try more of the menu in the months to come.

If you enjoyed this, I thought Monasaba was even better (disappointed LA Times chose this over Monasaba but understandable given environment). Not quite the same family atmosphere, but the dishes are better. Both are not close to as good as the restaurants of Brooklyn, which probably has more Yemenis than anywhere outside of Yemen, but it’s nice that the cuisine is around in Southern California a bit!

Thanks! That’s great there’s another Yemeni specialist, and you found them better than House of Mandi, good to know.

I’ll have to check that out next time I’m in the area.

We’re not familiar with Yemeni cuisine so it’s great to get your perspective.