Restaurants next to playgrounds (SFBA)

We’ve been picnicking with our small children near playgrounds throughout the pandemic, but had a unique experience last week. We ate outdoors at Hang Ah Tea Room Sum in SF Chinatown, and were able to simultaneously enjoy the meal and watch our kids play below at Willie “Woo Woo” Wong Playground.

Are there other outdoor seating restaurants in the SFBA that are adjacent to playgrounds, and with a direct line of sight? Hang Ah was great because the kids ran back and forth between the meal and playing, and we didn’t have to worry about them crossing streets.

See also a pre-Covid/shared spaces thread on destination dining in the vicinity of playgrounds.

I don’t know how accurate it is, but Yelp’s page for Birite Civic Center says they are scheduled to reopen on April 25. If that’s true, you have two epic play structures right next to it.

Never knew about that one. We’ll probably stop by at some point. How’s Hang Ah’s food?

I don’t know how accurate it is, but Yelp’s page for Birite Civic Center says they are scheduled to reopen on April 25. If that’s true, you have two epic play structures right next to it.

Oh, that’s great news! We used to go there regularly.

Never knew about that one. We’ll probably stop by at some point. How’s Hang Ah’s food?

Keeping in mind we have ~2-4 year olds, the playground is one of our favorites in the city. Artistically, it’s unrivaled-- only place in the same league off the top of my head is the tilework at 24th and York Mini-Park.

Hang Ah was better than I was expecting. My favorites were the spareribs with black bean sauce and pumpkin, chicken feet with black bean sauce, and, surprisingly, the lamb dumplings. Fried bread pillow with sweetened condensed milk and the red bean paste-sesame balls were both solid, and the family liked the egg custard buns and beef and tomato chow mein (I didn’t try these).

The grassy area with the one play structure in Hayes Valley (octavia and fell - Fulton) kinda semi-qualifies with this request. You have your options of smitten, ritual, the pizza truck, and maybe a few other places on that block

our other favorite playground and food option used to be the park at 19th and MLK. while not adjacent to anything, Irving and 19-23 is just a block away (and faster if u r on bikes) for one parent to go load up on dim-sum or Vietnamese sandwiches etc

Thrive City / Chase Center has a Dumpling Time location with 7 outdoor tables overlooking a large concrete and astroturf area—- not exactly a playground, but good for running around. Dumpling Time’s outdoor area has seven 4-tops, (some of which are doubled up 2-tops) and lots of people seemed to just get takeout and eat elsewhere—- we’d seen lots of candidate spots on our way from Crane Cove Park.

Today was a Sunday, and there was a small farmers market, with a singer for kids and someone doing balloon animals. 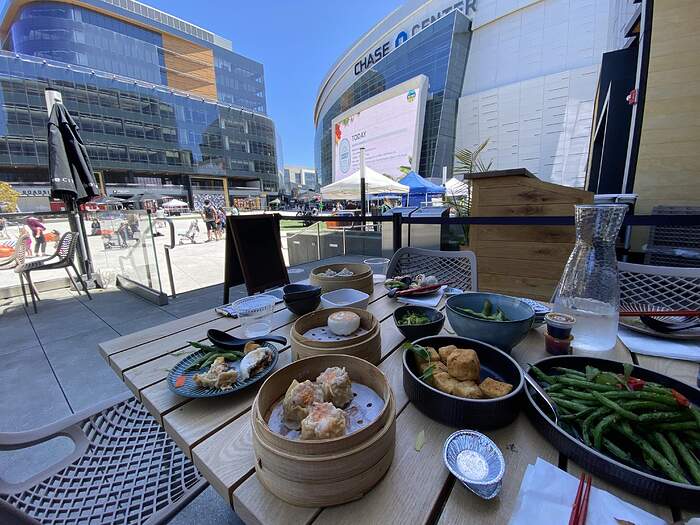 Dumpling Time’s garlicky green beans, plated with enough space to prevent them from continuously steaming, were magic— crisp and hit me with an ephemeral burst of flavor that you can’t get in a takeout situation.

The windy day didn’t do the XLB any favors, so I’d stick to other dumplings and bao next time. Shrimp & Pork Siu Mai were my favorites—- plump and had good texture contrast.

For future reference, there’s an unopened Gotts on the other side of the open space.

The Hidden Cafe, next to Strawberry Creek Park in Berkeley might fit the bill.
https://www.thehiddencafe.life/

In Palo Alto, Ettan backs on a courtyard good for kids running about. I wouldn’t call it a playground.

With the “closed streets” of the peninsula, a wide number of restaurants could be said to have space next to tables without cars, but I think that’s cheating. You’re really asking about playgrounds.

JJ Cool Cafe at the Cantor art museum’s closer, because there’s a real outdoor space, but the restaurant is closed (and turned from JJ Cool to something else even before pandemic, if I remember right). There are a few other restaurants on campus, I want to say the Tall Tree, which are more realistically pro-kid, but campus is still closed and the restaurants may be as well.

The Mt View performing arts center has a cafe, the something bean, that fronts on a very large area that could almost be called a play area. I always liked the paninis but I wouldn’t call it great eats. You could certainly keep an eye on kids from the outdoor tables, but there are many others like that (the cafe in RWC on “theater way”). No play structures. Same with Cafe Borrone in MP, I have seen kids splashing around the fountain with parents eating at tables.

Pizza My Heart on University Ave in PA is right on Hamilton Park. It’s also a paved park, but at least boisterous.

I think my knowledge between 92 and 237 fairly encyclopedic, and I can’t think of any dining that is “really” on a playground.

With my niece and nephew, we’ve had playground meals, but it always has involved take-away from a nearby place, and a pick nick-style spread. One of the most memorable was Cuesta Park and Tommy’s Thai.

If you open the discussion to good-takeout-food-with-kid-friendly-items-paired-with-a-nearby-playground, I think I have entries.

One of my favorite restaurants, Piccino, next to Wood Yard Park. Lunch and dinner.

One of my favorite restaurants, Piccino , next to Wood Yard Park. Lunch and dinner.

Thanks! I’ve not been there for a full meal in years, but your previous Piccino write ups entice me. Piccino’s breakfast offerings are solid, especially their banana muffin, and it’s a good morning Dogpatch option since Neighbor Bakehouse has minimized their hours.

Wood Yard has a small playground that’s great for very small children. Two weeks ago a preschool or something filled it above my comfort level on a weekday morning, but the surrounding seating was perfect for a picnic from Marcella’s Lasagneria (so many options of six layer pasta bliss. Their pancetta-forward white lasagna is too rich for me, but my kids love it).

Wow, looking through the Hidden Cafe’s Instagram feed, they’ve hosted quite an impressive lineup of pop-ups. That field outside looks perfect for our purposes. Thanks!