Disclaimer: In exchange for a review of UNO MAS, my associate and I received a comped dinner; photos are courtesy of Mr. Mark Reardon and UNO MAS. Original review (with more photos) is at: http://buildingmybento.com/2016/01/11/restaurant-review-uno-mas-bangkok-thailand/.

“Spanish food in Bangkok, Thailand?”, you reluctantly utter…why not, I say. After repeatedly telling Thai restaurants pet pet (very spicy) and consequently, repeatedly not being able to speak for ten minutes at a time due to pet pet – by the way, do you know which peninsula introduced chilies to Thailand and much of the rest of the world? – I figured it was time for a change.

Located on the 54th floor of the Centara Grand hotel right behind the CentralWorld shopping center, close to the Siam and Ploenchit BTS (elevated rapid transit system) stations along the ever busy thoroughfare known as Sukhumvit, UNO MAS offers patrons not only a quality blend of Spanish and Catalan fare but also excellent views
of the sprawling Bangkok cityscape. The head chef, Joan Tanya Dot, is
an affable fellow and comes with more than fifteen years experience
cooking in restaurants in England, the Cayman Islands and Spain. My associate and I were seated in the raw bar & tapas area, right
by the window. There was a rather loud party seated not too far from
us, but so as to not embarrass our host, I didn’t want to rock the boat. Clockwise from the center: wild porcini mushroom croquettes, chicharrones, Catalan-style roasted vegetables “escalivada”
with anchovies, Marcona almonds – one of my many weaknesses, “Joselito”
charcuterie board, sardines with piquillo pepper sauce, sangria-drowned
watermelon cubes, also known as “mock tuna on ice,” and potatoes with
aioli. Everything was a hit…which proved to be an issue with trying to finish savor the rest of the meal.

(The PR person introduced herself and said that everything would be
ready in half an hour…in other words, they already had a set menu to
introduce to us. Phew, that makes it easy, because nearly everything on the
menu sounded tempting.) Cochinillo asado, or roast suckling pig, is one of the signature
dishes of the restaurant. Amusingly, it is served with standard issue
gravy, Canary Islands green mojo sauce (made of cilantro, oil and
vinegar) and as a bow to the local population, nam jim jeaw, or dried
chili sauce. Chef Joan, in the style of the Segovia region of Spain,
cut the beautifully cooked pork with a plate, and then proceeded to
break the plate, as if to say to the animal, “we’re even.” Maybe. Moving
southeast towards the coastal city of Valencia, we were also served
seafood paella, replete with saffron-cooked rice, lobster, prawns,
mussels, clams, and scallops (vieira). I know we’re both from the US but, even our
stomachs have their limits. Still, both the paella and the cochinillo
were quite nice, particularly considering the breadth of different
flavors and textures available. My only two complaints about UNO MAS are that the bread was very
underwhelming – though that night, it’s not as if we needed bread – and
lobster forks/claw openers were given to us only after we finished the
lobster. It is likely that the bread will improve over time, and I
reckon the latter issue was simply because the restaurant was still
working out a few opening month kinks.

In all, with that caliber of cooking, good overall service and
alfresco dining available year-round, I have high hopes for UNO MAS.

I agreed that the acrobatic girl in the wine cellar is a bit of a show. It isn’t very practical on a busy day.

Gosh, that’s a lot of food. The pig on this photo looked huge (but when saw the photo chef before the pig, it was a really tiny pig, it must be really tender. In France, a suckling pig has to reach 5 or 6 week to be killed, but I think in Asia, there isn’t any limit.

Even though the paella was very impressive with all the different seafood, being a big fan of paella, I’m a bit disappointed the star should be the rice and I didn’t see any in the dish.

As for the bread comment, I didn’t eat bread in my 2 week trip. But I remembered the bread in Vietnam is very good, even the street food Banh-mi was top, crispy outside (it was very humid there, so I wondered how they could do it!). I guess it was an ex colony of France, they have the know how. If not generally, in Asia, people like the bread soft.

When we travelled, general rule is we always try to eat food from the country, but Thailand is an exception, it was difficult…too spicy, my guts suffered…

Ya, I used a combo of my photos and the stock photos (re: the cochinillo, my photos didn’t come out too well, and of course for stock photos, objects look larger than they appear…).

Oh, there was definitely rice with the paella, but I wanted to capture the meal as it was served. Here’s the “live” shot of it: 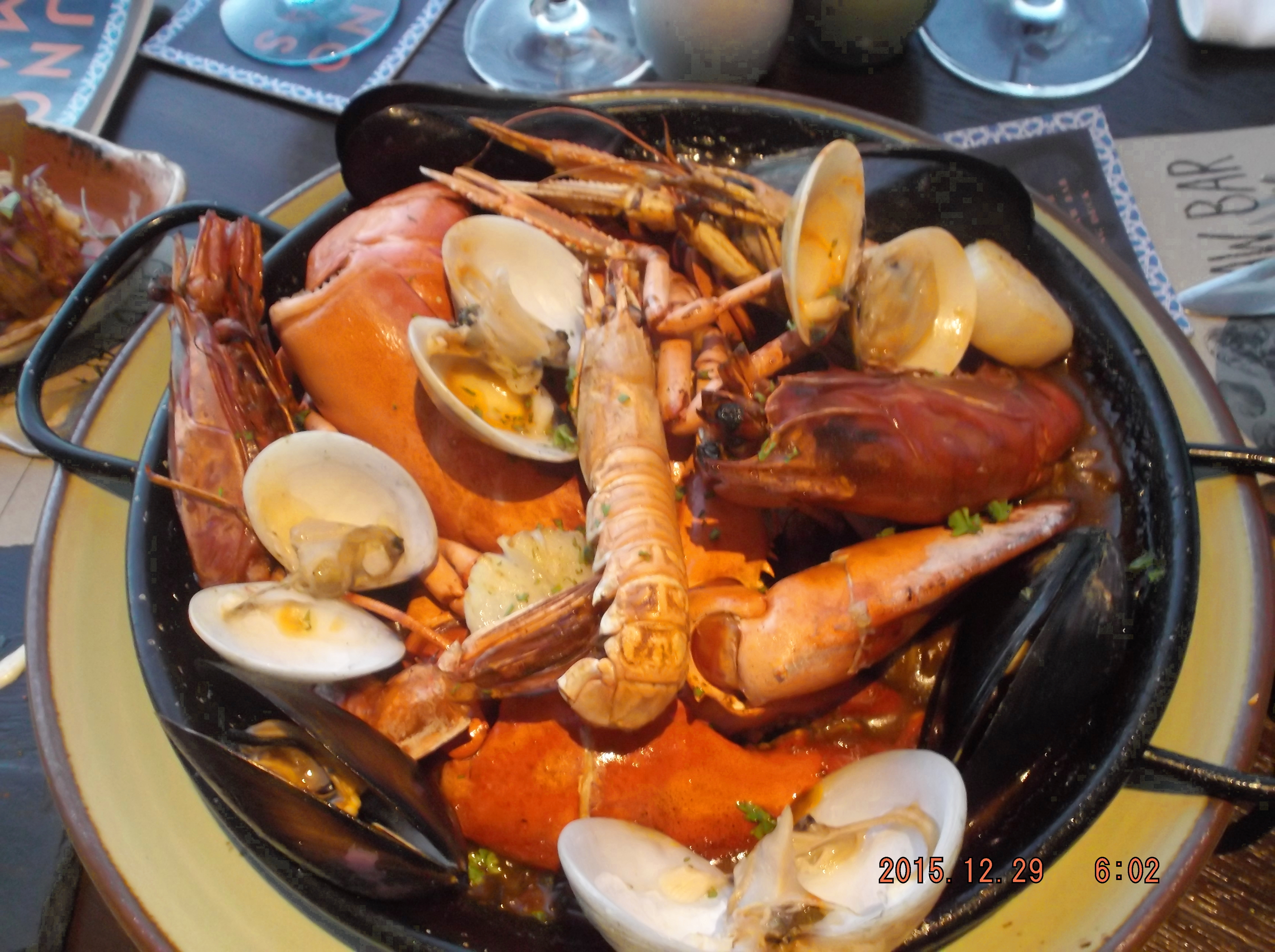 Though, you still can’t see the rice.

As for bread…can’t say Spain is well known for it, but I reckon the quality will improve.

Where were your favorite eats in Bangkok?

Where were your favorite eats in Bangkok?

It was in 2013 summer, so now I looked back, only the best stayed in my mind. We liked The Local, the restaurant was located in an unassuming area, popular and commercial mix sector. But the restaurant itself was quite beautiful and it was spacious… with a lot of antiques, histories, very interesting. Food was more refined than most place we ate. I loved their cocktails.

The best was Nahm, we were lucky to got ourselves reservation for lunch on the last day of our trip. That day traffic was stagnant in Bangkok, we needed to change several times, taxi (wasn’t moving at all), metro, another metro on foot…, we were at least 1 hour late, we kept calling the restaurant to tell them we were arriving… we saw the waiter talking to the chef and still allowed us to eat the lunch menu (it was around 2:30 pm) on 1 condition, the food would be served a few dishes each time than 1 after 1 formally… Even with the chaos and the stress of the transport and it was hot that day. It was still the best meal we had in Thailand, the dishes weren’t so different from the food we ate from the other restaurants in Thailand but the equilibrium of spice and taste changed everything in a dish. It made us even changed our viewpoint on Thai food.

Back home, I bought a David Thompson cookbook as a souvenir.

Is this Spanish dessert? It seems I saw Churros in several countries, mostly as street food, if I remembered correctly.

Thanks for the review. Wow you finished everything! and the churros with chocolate after the meal!

How big is the plate of paella, sized for two? or is it individually sized?

Bread- unless they move enough that they bake their own, and have their baker in house, I assume they just source from somewhere. How’s the bread elsewhere in Bangkok? (I asked because I wonder if its a local issue.)

Oh, couldn’t resist the churros…would you have been able to?!

The paella was definitely big enough for more than person.

As for the bread, I neglected to ask if they bake it there (although they seem to prepare many other items in-house.) Considering the year-round international population - both transient and resident - in the city, it is possible to find decent bread.

One day… one day… in the meantime I will make do with sweetened inauthentic thai food.