I can’t believe I’m writing this, but Sirena in Long Branch (at pier Village) is oceanside, and while it’s been a couple of years since I was last there, I was truly pleasantly surprised by the wonderful lunch that we had!
The other suggestion would be upstairs at Stella Marina in AP.
There’s also the columns in Avon, but I haven’t been there.
Also just occurred to me – what about DriftHouse and sea bright?

I haven’t been to Drift House but have been invited to an event there in May. I know the Director of Private Events there if you’d like an introduction.

OK, so I guess I misunderstood what my sister wanted. I thought she wanted recommendations from people who know a thing or two about local food. But she did her own “research” which consisted of looking at menus on the internet. She is not interested in my opinion, or my friend’s opinions.

I am really annoyed that my first meal out since the pandemic is going to be at McCloone’s Pier Village. Really, really annoyed. But it’s Mom’s 90th, so I’m going with the flow.

I’m betting I can speak for all HOs and say we’ve ALL been there (not ot McCloone’s Pier Village)… you’re at the mercy of someone who doesn’t care about food, and we all wonder right along with you why she wouldn’t take YOUR advice, but as you say, it’s your mom’s 90th, and that’s THE reason to go with the flow. (Then maybe stop for good tacos on the way home.)

@CurlzNJ said it much better than me. I was going to go with “that sucks!”

Scott Anderson is still a genius.

YOu captured it perfectly! Thanks for the wishes to Mom!

This is EXACTLY how I’m feeling!!

Salt in the the wound!!!

Kind of funny, I went to their menu with the intention of mocking your sister for picking the place. However once I looked at the menu, it doesn’t look that bad for a “shore” dining experience. Execution is another thing. The last time I ate there was for a business lunch at least 5 years ago, I remember being happily surprised by a seared tuna app (not sure if it’s the same as what’s now on the menu) and a short rib nacho’s.

Other than that I don’t recall having much else there that I would say was truly “good”. I also attended several banquets there that were quite disappointing food wise, but also conditions. The banquet room upstairs while offering beautiful views has an all glass ceiling and on a sunny day the entire room is a sauna.

Listen, when you go if there is a “hefty” young man, with reddish brown hair and beard bartending. (he might have shaved) His name is “meat” introduce yourself and tell him you are a friend of mine, he would know me from 118 Bistro, Meat and I became buddies. I haven’t been there to visit him for obvious reasons, but he’s a good guy. lol

Meat and I became buddies

Sounds like this should have it’s own thread forum.

I think my issue w all of the McCloone’s places is that they are vastly overcharging for what I call ‘corporate’ (Sysco) food. It’s not that’s it’s BAD, I just hate that it lacks creativity–and paying for a view.

Thanks for all your recommendations. Here’s the final report of how our dinner went at McCloone’s Pier House.

Firstly, and the only thing that mattered, Mom had a GREAT time with the family. The table was along the window, and she had a great view of the ocean. She enjoyed it, so that was a success!

Secondly, everything that we know about McCloone’s places hasn’t changed since the last time you were there. Mediocre food and lackluster service.

We started with buffalo wings, which for me were the star of the meal. Crispy with a very traditional sauce. The celery and carrots had seen better days. The blue cheese was ok. Had the Jersey flatbread, and it would have been better if the crust had been done more, it wasn’t cooked through and was soggy.

The crabcakes were half crab, half filler. The penne with vodka sauce was worthy of your local pizzeria. Lobster bisque was “okay” according to my sister.

The USDA Prime burger seemed like a frozen burger from a fast food place. It didn’t get eaten. The burger was $20, and he asked for onion rings with it. They were an extra $5. No sides with a $20 burger!

NY Strip was overdone. The Bronzed Swordfish had no complaints. The shrimp cocktail was enjoyed. I had the filet mignon. It wasn’t filet, it was a piece of gray pot roast. Cooked well done when asked for medium rare. Nothing on the plate was hot.

By far, the wierdest thing was the size of the asparagus. I have never seen asparagus that big! It’s like they were on steriods! Tree trunks of asparagus! You’d think they would peel the stems of the asparagus to make them a litte more tender? No, not at McCloone’s!

Service was lackluster. Our waitress had trouble remembering who had what drinks, and delivered wrong drinks. We had to ask three times for more bread, and finally the bus person brought some. When the entrees arrived, they were auctioned off to the table. And since two of us were having steak, our waitress came and placed steak knives at our setting. Both knives were placed in the same fashion! I have no explanation for that at all!

I did not complain about any of this to the staff, even though a manager did check in at the table. This was about Mom having a good time, and she did. She was thrilled with the location and being with her family. I tipped over 20% because I knew going it it would be like this. My brother-in-law wanted to tip 15%, but luckily I was filling out the slip.

The best things I ate were the wings, and the warmed, made somewhere else rolls with butter. So things haven’t changed at McCloone’s and they never will. The place was doing a hpping business. 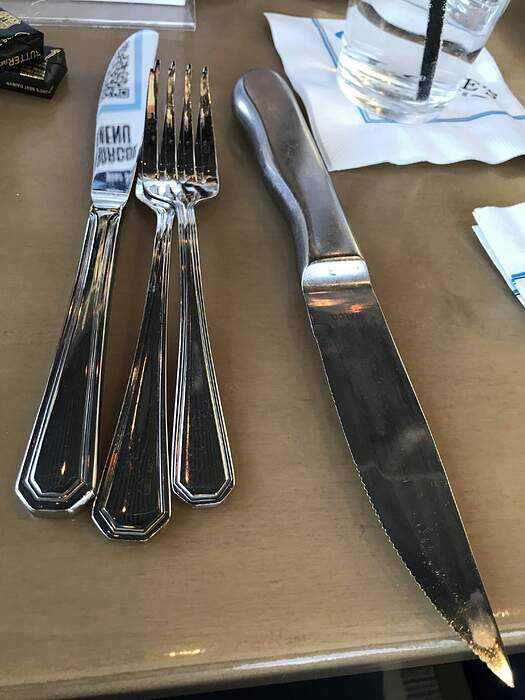 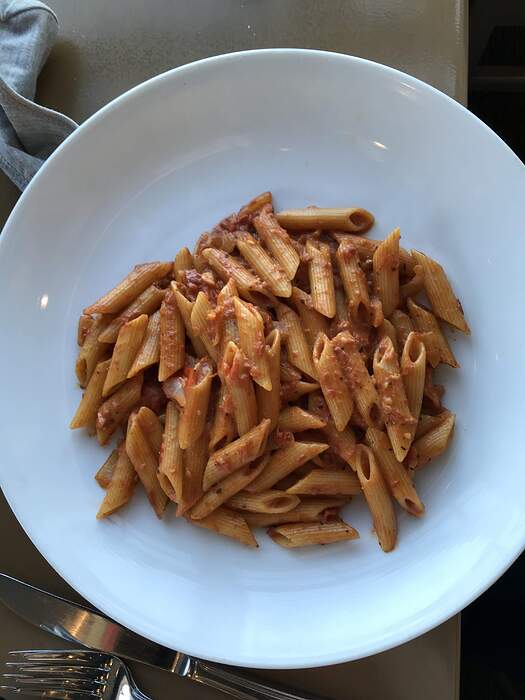 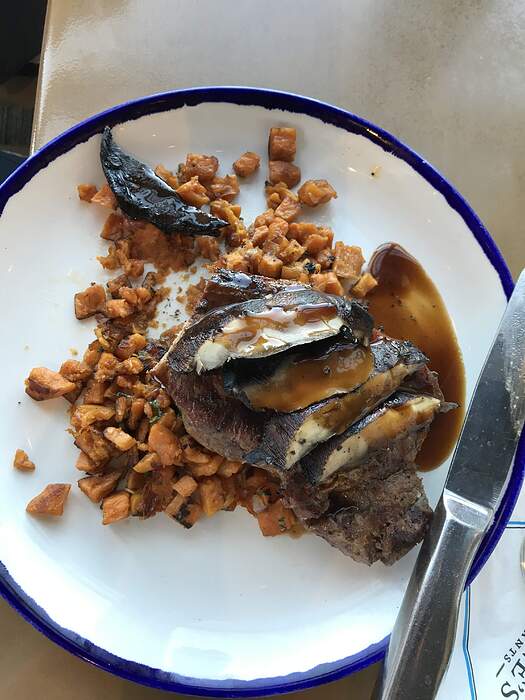 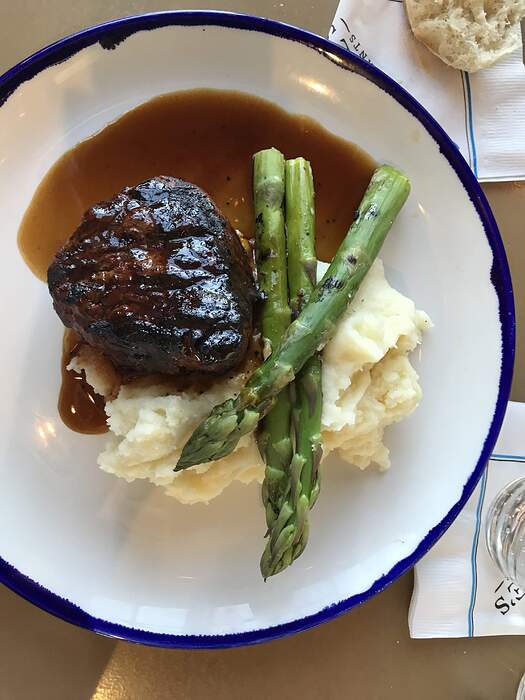 Glad your mom had a good time but UGGGGGGGGGGGGGHHHHHHHHHH!

My mom grows asparagus and she does have some serious monsters like that. I like them best grilled because there is little risk of them falling through the grates.

Glad your mom had a good time but UGGGGGGGGGGGGGHHHHHHHHHH!

Basically what I was going to respond with. Verbatim. But as you said, your mom having a good time was THE goal. My real question is…what did your sister think?!?

And my P.S. is that I really do hope you’ll send this note and photos to the restaurant. I fully understand why you wouldn’t say anything while you were there (because, MOM), but if nothing else, they should be made aware of their basic service issues, most especially that knife placement. W. T. H.?!?

Unfortunately exactly as we expected. As others have said as long as mom was happy that’s all that really matters. This just really struck me, outside of the knife thing lol. How sad is this plate of pasta, I mean can you plate a more pathetic looking pasta dish? A sprinkle or twig of parsley too much? Perhaps some cheese? Something? Anything? That looks like that pasta equivalent of the lunch room lady (or prison worker) taking a spoon full of goop and dropping it on your plate. 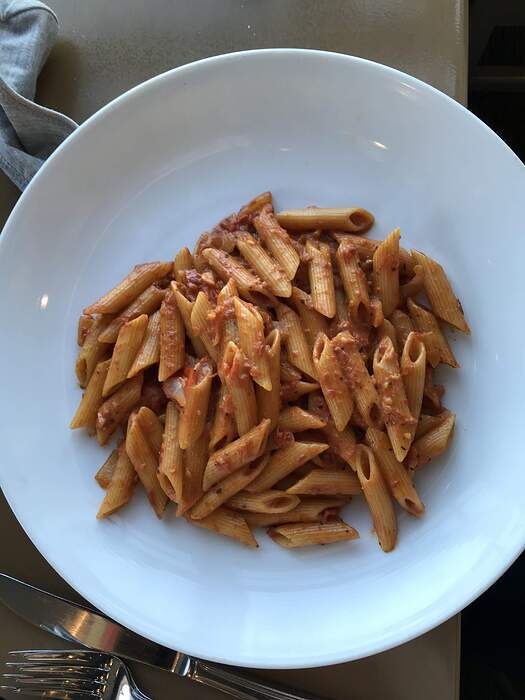 1st- glad to hear Mom enjoyed, that’s most important part. Just grateful when we finally all can be in same room again safely!

2nd- it looks like they keep a big tray of it warm and just dole it out, there’s no sauce on the plate at all. At home we mix the warm pasta in the sauce pot/pan then plate, but even then some gets on the plate itself. This looks like its kept in a chaffing dish or tray, warmed, and then just spooned it on the plate.

So my question is this, if the shrimp cocktail & the swordfish were good why does anyone order a burger in a seafood restaurant? Whether it’s this one or any other one?
When in Rome do as the Roman’s do , when in a Seafood restaurant eat seafood.
Glad your Mom enjoyed her day.

Yup, that was it!

My real question is…what did your sister think?!?
She thought the food was just okay. But she was happy with the location/view. My sister has always been about the “ambiance” of a place, and less about the food.

I am going to send an email to them, with a photo of the knife and tell them about the “filet”!

How sad is this plate of pasta
It mirrored the majority of the meal, unfortunately!

why does anyone order a burger in a seafood restaurant?
Because the person ordering is a kid with a limited oalate and not adventurous in any way. So he picked what he hoped to be a “safe” option.