Restaurant menu from 1913 found in Liverpool 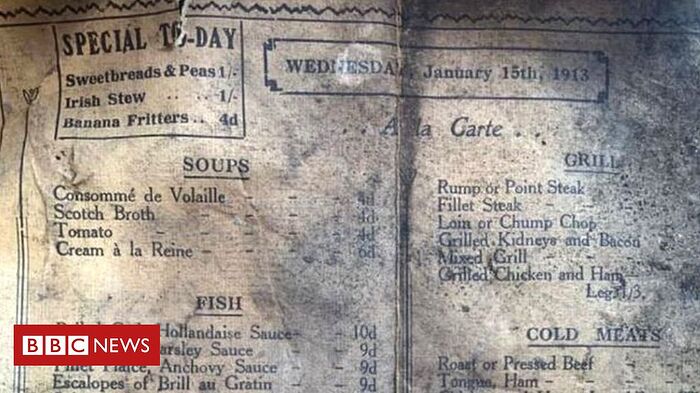 It features a selection of popular dishes from the time including grilled kidneys and boiled fowl.

I was surprised to see spaghetti on the menu. My mom and dad (born in 1928 and 1920) said they never saw pasta in the US prior to post-WWII. Of course, they probably didn’t eat in many high-end restaurants.

I offer you Italian Spaghetti Savoury, published in The Times, 12 February 1917 (and included in my book "Bully Beef & Biscuits - Food in the Great War)

Cook spaghetti in boiling water for about 10 minutes. Drain and place in pie dish or fireproof dish. Melt margarine, add flour, and cook for a minute or two. Add liquid, stir till boiling and boil well. Season and pour over the spaghetti. Sprinkle grated cheese over and brown lightly under a gas griller. Garnish with sippets of crisp toast.

I also included in the book, a dessert called Macaroni Pudding, published in Simple Cookery For The People, 10th edition (about 1916)

Surprising that, with the number of Italian immigrants to America from the 19th century that your parents hadnt come across pasta. Would that be that the immigrants were still mainly living in their original communities, so their influence on food hadnt yet spread across the country?

That sauce doesn’t seem too appetizing to me.

I think Italians started immigrating to Philadelphia in numbers in the 1920s. It’s a great city for Italian dining for years now (though we’ll see what survives post-pandemic).

Wow! It was quite international.

Any idea what is cream à la reine?

A quick Google finds a number of references to “potage a la reine” which I assume must be the origin (with cream added).

Depends on the cities.
There was a lot of anti- Italian, anti-Greek, anti-German, anti-Polish, anti-Irish, anti- Jewish and generally xenophobic sentiment among many Americans and Canadians right up until the 1960s.

People raised in homes without exposure to Continental European food considered it foreign. Even garlic and parsley were considered foreign foods in London, Ontario in the 1970s. In the 1980s, my classmates found any Greek food in my lunch foreign.

Also, in some cities, like Pittsburgh (probably any large city, I mention Pittsburgh because my uncle was a steelworker who was more aligned with the Polish and Irish community and not very accepting of the Italian community, much like a Pittsburgh Archie Bunker) , there have been rivalries between some ethnic groups, which could influence whether people would be eating or ordering pasta at restaurants , or even going to restaurants that served pasta.

Italians, Croatians, and Greeks were certainly immigrating around 1900, and some were opening restaurants at that time. Most would have been selling American food, if their customer base was American.

I’d think places like NYC, Philadelphia, Boston and Chicago have some restaurants that have been serving pasta and other Italian food for over 100 years.

With the closing of a restaurant in San Fransico on Tuesday, Ralph's Italian Restaurant on South Ninth Street is now the oldest Italian restaurant in the country. Ryan Rubino is the fifth-generation owner.

rivalries between some ethnic groups,

Funny, I knew about Ralph’s. Funnier, it’s mention prompted me to think about those ethnic rivalries. Back in the day South Philly had distinctive Irish and Italian communities (mom’s family was in the Irish section though her father was German); so perhaps she didn’t try Italian food until she was an adult living in a less territorial neighborhood of the city. Dad grew up in a German neighborhood although his family was Irish.

The irony? I have always said for an Irish (-American) woman, mom is a terrific Italian cook. In fact her chicken piccata is better than many area restaurants

Also, I am not a fan of Irish or German cuisines, but I can eat Italian every week.

Bamonte’s has been around in Brooklyn for over 100 years. I saw the Bamonte family listed in East Williamburg in the 1910 census when I was doing some transcription work.

Same in the UK. And the problem remains with us, fuelling elements of our recent and current political debate.

We do have our share of Maskholes, but even some of them enjoy foods beyond the Irish- British - Canadian culinary canon.