I often spend time in The Woodlands visiting folk, and my favorite there is Republic Grille, so I thought I’d talk about it here.

Their CFS and CFC with cream gravy has won accolades and for good reason. It’s my go to dish. The gravy is so rich, I fear it is made with actual heavy cream and butter. The CFC that I prefer is crunchy beyond any other and the gravy is served on the side or on top to preference. It comes in small or large. Pictured is the small, which I only finished half of.

The mains come with two sides and last weekend, I ordered the jalapeno and bacon mac and cheese for the first time along with the Southern Green Beans.

I can’t say enough about the mac n cheese, it comes in its own casserole and is creamy and spiked with bits of fresh jalapeno, crispy bacon and crispy bread crumbs. Really heavenly.

Also in its favor is its own dedicated parking out front. I avoid the many eateries at Woodlands Waterway if I can because parking is such a hasssle.

So there you go. 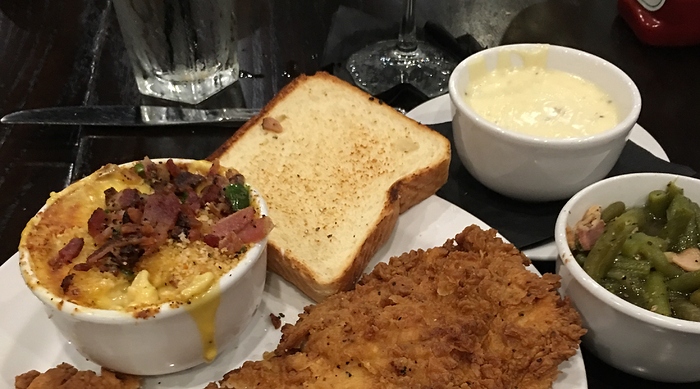 Everything looks good, even the mac 'n cheese (I’m not a big fan). Kudos to any joint that will offer the CFS/CFC gravy on the side.

I often am very intrigued by reviews of all these places in The Woodlands but it’s just so far from me and I just never have any reason to go up there otherwise. Thanks for the report, though.

I am not a mac n cheese fan either, unless it’s made by me because I really don’t like the “dry” kind that is served so often. This was far from dry.

many eateries at Woodlands

My office was in The Woodlands in the 80’s and it was a culinary wasteland.

When you run into Woodlands founder George Mitchell at Marco’s Mexican restaurant you know there’s nothing good to eat.

I’ve never seen this before. Is this common? Is Sysco Houston known for good products?

I’ve lived in Houston for a very long time and I am very familiar with Sysco products. They may buy raw products from Sysco but this is housemade stuff. Premade Sysco is not quality, but you apparently already know that.

I was spending a lot of time in Galveston when George Mitchell died and was buried there. He was known to eat lunch most every day at Olympia Grill at 21st St., always by himself. His wife had died a few years prior.

We used to see him a lot at the Tremont House Hotel’s lovely lobby where he sat at the same spot at HIS table.