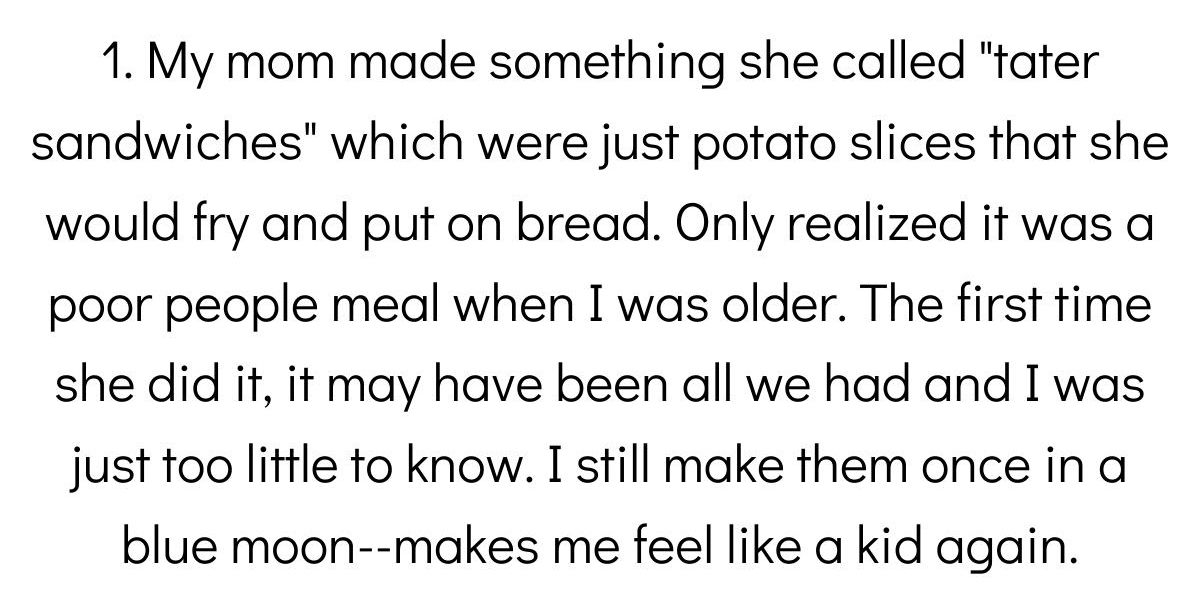 People Who Grew Up Poor Share Their Favorite Cheap Meals

People who grew up poor reveal their favorite cheap meals.

We ate popcorn with powdered milk for breakfast. My mom made all of us (6 kids) brown bag lunches for school and sometimes would buy marked down beef, cook it and grind it like ham salad for sandwiches on her homemade bread. I still remember how sour tasting that meat was. She sometimes would buy a large unsliced chunk of bologna, score it like a ham with cloves and pineapple slices and that would be a special Sunday dinner with home canned vegetables. My dad said when he was in engineering school he would go to a diner, order a cup of tea but squeeze ketchup in it instead of using the teabag so he could have some soup.

Anyone have stories to share? I can’t think of anything but that grey sour beef that would put me off from eating anything as an adult, but we had a large prolific vegetable garden and meat was seldom on our table.

I didn’t grow up poor, but I hung out with a lot of kids on what they used to call “food stamps”, so maybe THEY were. We all went to summer camp at the local public school, an they always seemed to serve cream cheese and jelly sandw5. I never had that anyplace else.

I guess that doesn’t make a survival food, but that’s all I got.

That story link is very wonky to scroll through but from what I could read, I have eaten most of the examples in my younger days. Probably out of practicality and at a time when food choices were determined by my working mothers time constraints. We thrive on these memories since her passing.

Food let alone cooking was not the interest it is today. Sharing half a pbj sandwich was a rite of passage.

The original Reddit thread is easier to read than Takei’s blog.

r/AskReddit - People who grew up poor what was your favorite poor person meal?

Thanks. i def at all that stuff as a kid.

I’m still not sure what “poor” means, but I won’t be leaving that to reddit to define.

One definition where I live is related to qualifying for certain free meals at school.

Certain meals for free doesn’t necessarily mean poverty either. It often means a certain income threshold Qualifies you and your family while working.

You are so right. I mis-spoke. I was thinking of one metric that is sometimes used to measure socioeconomic status, but it’s not called poor nor poverty. I do think poverty is fairly well defined, at least in the US. “Poor”, not so much.

For me it was hearing my grandmothers…(both born in the Ukraine) coming here and eating what they could…
They both graduated high school, had great jobs and became bread winners…
My one grandmother,I called her NANNIE…bringing home a whole fish weighing about 5 or 6 pounds on Friday night…Shabat dinnerr… 10 people had a meal…
I never had such a problem and am glad I never had to worry about food…

I never considered ourselves “poor” but I had no comparisons. My father was an engineer, so I guess he made a good salary but we moved a lot so he could make more money at a new job. My mother was a SAHM with 6 kids, me and 5 voracious boys. When I started to babysit and work in other people’s houses was an eye-opener. We never had a television. I’d never had a Coca-Cola or potato chips - let alone onion dip! I remember going to a girlfriend’s family Sunday dinner and having a baked potato with sour cream for the first time. I think I was probably 10. And they had banana bread with real butter. Those are.my first great foodie memories.

A funny story - one of my assignments in grade school was keep a record of sunrise/sunset for ?? a period of time. No television and the only newspaper we got was the Wall Street Journal. I remember calling the National Weather Service or its equivalent the day before my assignment was due and they pretty much blew me off. I didn’t;t get a passing grade on that.

Did you have to go to the office when you’d watch stuff in class?
No Our Mr. Sun or space launches?

My family grew up low income, so I definitely recall lots of humble and meager meals. But this was also not that crazy for my parents who grew up overseas, and spent their early years living through war times or post-war times when few people could afford much.

White rice was always available, but we had meals where it was sometimes eaten with just salted fish and steamed Chinese sausage (usually with Chinese greens). These highly flavored foods paired well with lots of white rice, so you didn’t need a lot of it. Spam had its height when real meat was not affordable, so fried spam and spam fried rice were common for us too. We’ve even just had a fried egg with a dash of soy on top of rice. Funny thing of course is that I still enjoy these, and will make these when I’m tired and don’t want to cook. They are tasty!

My poor college days on the other hand involved a lot of Fluffer nutter sandwiches, instant noodles, and a weird obsession with Campbell’s Chicken and Stars soup. Oh, and cereal, which sometimes was just lifted from the college cafeteria.

White rice with milk and sugar for breakfast. I still enjoy that, but my mom tells me that this tradition started when we moved in to a new place and she had no grocery money. Someone had left a bag of rice and a bag of sugar in the cupboard, and she had WIC, soo…

Halibut cheeks. Not survival food now! But at the time, my mom would pull the heads out of the dumpster at the fish-processing job she had, and cut off the cheeks to bring home. Good stuff.

…my mom would pull the heads out of the dumpster at the fish-processing job she had, and cut off the cheeks to bring home.

Delicious! My grandma peeled bay shrimp in a plant off Jefferson St in SF fisherman’s wharf in season. Paid 25c per lb.

When we were lucky enough to score some for dinner, it was like finding gold! America, what an amazing wonderful country!!!

I remember them bringing a television into the classroom on some kind of trolley to watch the space launch. And I also remember getting sent home from school after lunch when all of the teachers were outside in their cars listening to the radio about the JFK assignation - they were all crying but we didn’t have a clue what was going on.

I asked because I remember vividly one kid we went to grade school with whose parents refused to let him to watch television for religious reasons. He would have to go to the office when we’d watch the space launches, films and current events.
Even then TV had woven itself into our lives.
I do remember our lunches then because the cafeteria ladies baked fresh bread and rolls every day so the whole school could
indulge in the aroma as we waited for lunch. And we had the classic school pizza, creamed chipped beef, and fish on Friday because we had a ton of Catholic kids.

I didn’t understand about going to the office part - apparently our lack of a television was ours blew some tubes back in the Muskateers years and my parents never replaced it. I went to a regional high school in the middle of soybean fields so it was bring your own lunch or buy lunch at school. When I started making money baby-sitting etc. I always looked forward to the school lunch on Friday because I loved the fish sandwiches and it was always a treat.