After a cocktail at Town Tavern… 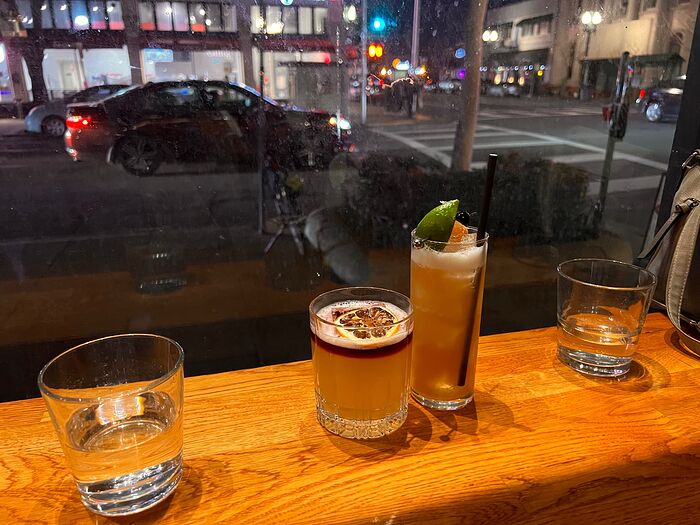 we walked across the street for margaritas, sangria, and some Nachos!

Cheesy of us to be so simple on a night out (heehee), but honestly, it was so nice to be simple and just enjoy each other’s company.

The restaurant was busy busy at 6:30 on a Friday. 90% inside as the night was cold (but dry!) We sat in the bar and had lovely service from the ‘tender. After some chips and salsa, a house margarita with nice flavor and a very (very!) mild sangria later, we were served Carne Nachos with everything. 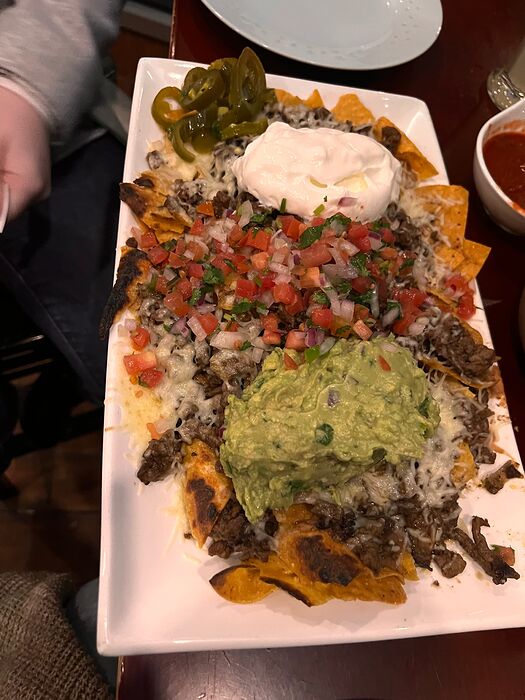 Both the chips and the nachos had house made tortilla chips, but the percentage of small broken pieces to chips was too high.
I am a fan of balanced nacho plates so I don’t have to plan on the amount of creme, guac, etc., and each bite is a bit of surprise, but this was not to happen here.
So I enjoyed as many chips that were large enough to scoop with and then dug in further with a fork.
The carne was those little pieces left over from everything else and was distributed quite evenly with the cheese.

The two of us finished about 2/3 of the plate.

We would go back again, possibly not on a Friday. Good service and food. I’ll order a custom drink (or something neat) if we go back.

If I went back there, I might be tempted to ask for cheese nachos on one platter and all the toppings on another one. As generous as they seem to be with toppings I wouldn’t even mind paying a small up charge for separate plating. Those are some seriously weighed down nachos. And not in a good way.

We visited La Penca twice in 2018. Definitely large servings, not great quality but a few things were very good - the chile relleno was one, and the lengua (beef tongue) was outstanding. We asked for the lengua in a flour quesadilla, which the kitchen agreed to do, and it was wonderful. Tender and flavorful!

Canasta Kitchen on Webster St./Alameda has lengua, but not as tasty as La Penca’s. But Canasta makes a great shrimp ceviche, and very good fish tacos, so that’s where we go for those two items.

My favorite nachos is at La Calaca Loca/Oakland, but they have changed it so I have to ask them to leave off the sour cream. They used to use just a drizzle of crema, which I preferred; now they use both and it’s too much.

i had an exceptional nachos (usually not a nachos orderer) this last weekend at Laughing Monk in sf. Stopped by for a beer after a day fixing some art, and there was a nacho popup with a forgettable name (nachoz?). The chips were hand fried, one huge plus, and the carnitas was super flavorful. it was heavily spiced (clove, star anise, cinnamon?), and pulled until fluffy. The one fault was it was a little dry, and the proprietor said we wasn’t happy with it when i complimented him. Good house made white cheese sauce instead of anything manufactured. I like some kind of actual melted cheese on my nachos, not just sauce, which was a minus.

The beer at laughing monk had the usual two belgians. I opted for something more unusual, an ipa made with lager techniques. I think they are having some kind of barrel aged tasting celebration this weekend (eg feb 4?), if i remember the signs. enough people hanging and playing board games to be a little lively at 3pm on a Saturday.