I’m likely going back to Maine in a few weeks and have some questions on Portland and Mount Desert Island areas for food and beer ideas. I am primarily targeting non-fried seafood options.

MDI - I’m probably staying in Bar Harbor for a Thursday night, and likely having dinner at Havana. I like Paella with soccarat - is Havana’s paella that good, is the moqueca good or should I get something else?

Also, when I’m up there, I’m likely having a late afternoon lunch/dinner on Friday, at Thurston’s with a soft shell lobster and maybe a lobster stew. Is there anything else recommended at Thurston’s? And any recommendations for a smaller seafood lunch on the first day - quick looks show Abel’s, C-Ray, Peekytoe Provisions, and Travelin’ Lobster as possible options.

Portland - I’ve got most meals planned out already. Does Central Provisions often have brunch specials (Monday) not on the menu?

Beer - I’ll be probably stopping by Industrial Way (Definitive, Foundation and Allagash are favorites) and Bissell Brothers for beers. Are there any places in either Portland or South Portland that are outstanding breweries which have opened in the past year? I tend to like fruity (not always sour), Belgian white, and some of the IPAs from the places above.

Thanks for any help!

re: Bar Harbour - when you go there you should have the expectation that you are there for the scenery and nature (which great) but less for great food. I remember Havana from some time ago and you shouldn’t expect too much, e.g. reasonable paella (no soccarat). Most restaurants we tried there were OK.

Trip report from June 2021, kind of long. Copita was really good, but I do not think they are in business any longer. Have a great trip, its a nice area.

Yup Grumpy, I read the past couple years and saw your report, along with the MidCoast Maine reports. Thanks!

Honk - to me, ‘great’ food could be in a dive as well, which is why I’m looking at Thurston’s. Havana’s site actually states that they have soccarat on the paella which is why I was asking about quality of it.

I went to Havana last week and it was wonderful. Reservations were a must. The mojito and caipiranha were both expertly mixed, and I decided to have a gazpacho appetizer - I think the fruits were watermelon and cantaloupe? with some other vegetables in it, and lobster moqueca. The latter dish was outstanding, bursting with flavors, and I’m going to try and make moqueca at home because I liked it that much. Oh, they also gave bread with a cinnammon/something butter, a chili oil, and bean dip that was like a hummus.

I did not drink wines, but overheard the waiter telling a customer that the owner was passionate about the selection. Later in my trip in Portland, someone asked me about Bar Harbor, and said Havana had been cited in (some wine magazine) for having an outstanding list. The other people I met that night only had good things to say about their meal at Havana, This would be a quality restaurant anywhere, not just in Bar Harbor.

Lots of pictures and words in my next post (Portland area food only). 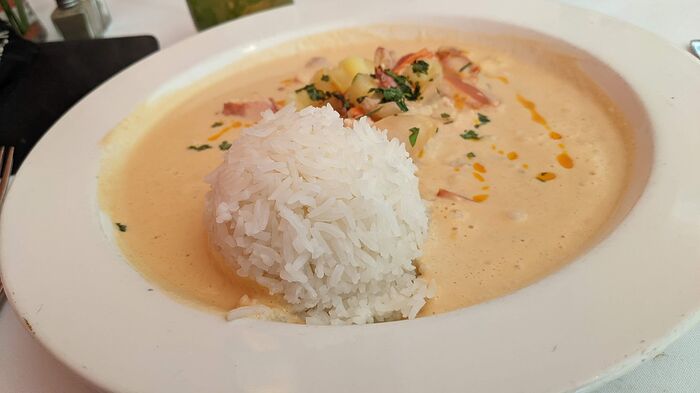 Before I go on to Portland, a couple more thoughts on Bar Harbor.

I’ve loved Atlantic Brewing’s blueberry soda. I’m not a big fan of their beer, but their blueberry soda is miles better than Capn Eli’s, and I like it more than Maine Root. I first got it in Portland years ago at one of the shops that sold everything Maine-related, but I’ve been unable to find it in that region, except in Wells at Tully’s. However, in Bar Harbor? This was EVERYWHERE. Seemed like every shop had blueberry soda and root beer, and it was Atlantic. The Hannford had cases piled up right by the cash register in a huge display. The improv theatre had it for sale alongside the regular sodas.

I also noticed that the Hannaford in Portland had lobsters for 9.99 / lb. They were imported from Canada. Really, Hannaford? Couldn’t think of anywhere else to get lobsters from - like the dock down the road?