Quick question - are you allowed to bring bottles into the stadium? I’ve scored tickets to a lot of ball games this summer, which I’m really looking forward to. I’ve heard great things about PH but I’ve also read that outside glass bottles aren’t allowed inside the stadium. I know that they’ll pour drafts into plastic cups which you can carry in, but I’m really not into standing in 15-30 minutes lines every time I want a drink, and I’m even less interested in navigating back and forth from my seat and dodging crowds with a 16oz Blind Pig IPA in hand. I’m wondering if I can just buy some smaller bottles of Orval to pack into my cooler and carry into the stadium? Can anyone confirm whether this is allowed? Also, from what I’m reading on AT&T’s online FAQs, I’m guessing they won’t let me drag my little 50’s galvanized cooler into the ballpark, but does anyone know whether a small 13" hard styrofoam ice chest would get a pass? I’ve been to a good number of Giants games in the past but I’ve never held regular tickets so I’m pretty excited. I wanted to stock up on Italian sandwiches and potato salad from Lucca Deli on Chestnut before each game and then swing by Public House to pack out my cooler before first inning. I just wanted to check in here to see if that plan sounded kosher… If anyone has advice to offer, it’d be very helpful and much appreciated!

A: No, we are not changing our bag policy. The Giants allow fans to bring paper and recycled grocery bags, fanny packs, backpacks, lunch bags, diaper bags, soft-sided containers, purses, handbags and briefcases, as long as they are not larger than 16"x16"x8", into the park. All bags, including women’s purses, will continue to be subject to inspection and checked upon entry. Bags will not go through the metal detector.

Alcoholic Beverage Policy
No alcohol (including non-alcoholic beer and wine) or illegal drugs may be brought into AT&T Park. Once inside the park, alcoholic beverages may be purchased throughout the park. The following restrictions apply:

All alcohol sales end on the Promenade and View levels and in all seats at the end of the seventh inning.
There is a two-drink limit per purchase at the concession stands.

Asking specifically about Public House as there’s a revolving gate directly into the stadium and I know they have a drink policy worked out; I just don’t know specifics (i.e. limited to draft pours? bottles y/n? restricted to certain number? etc). I’ve read lots of mixed info on the web

I guess I would just call Public House during a quiet-ish (non-game) time and speak to a manager. I would be very surprised if they allow glass into the park.

PSA: You can bring in two drinks (at a time) from P.H.

I will call for specification on whether that incl. bottles or whether it’s limited to draught pours.

I hope I can get them to fill my 36oz double wall vacuum insulated bottle with Racer 5. That sounds way more practical than a cooler and I can shove it in my small 18x11 canvas bag with a Pat Burrell sandwich from Lucca!

Sorry to rain on your parade, but, no way are they letting you in with glass. PH sourced or not. Probably true of cans too, ask PH. Go Giants!

Interesting.
I worked as an usher at KC Royals games for 2 years back in the 70’s.
They used to allow food, drinks, and coolers
into the park,
then an incident after a game with the hated Yankees , a brawl broke out and one guy got clubbed upside his head with the then legal cooler. He dropped and hit the curb and died.
After that happened, everything from outside was banned. Beer jockeys can pour bottled beer into cups but that’s all. 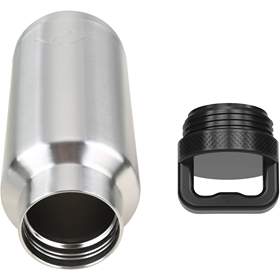 For the record, no one is “into standing in 15-30 minutes lines every time I want a drink, and I’m even less interested in navigating back and forth from my seat and dodging crowds.”

No one. It’s part of the experience of going to a stadium, however. Unavoidable.

Not allowed at all. Only plastic bottles filled with non-alcoholic beverages. Subject to search upon entering.

Not saying that this incident definitely never happened, but it’s rather strange that it’s not easy to turn up with either a Google search or looking through newspapers at the time that include the KC Times (the Star’s online archives don’t include this period).

The only four words anyone needs to Google for why baseball stadiums have been wary of beer containers since the 1970s: Ten Cent Beer Night.

10-cent beer night. Was supposed to be a great idea that didn’t work out that well. LOL

I didn’t witness the incident. It was the spiel given to us by the management as to the reason for the rule.