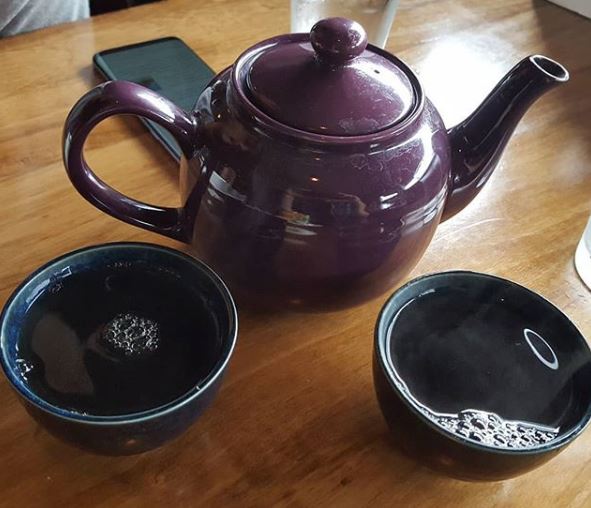 As a food blogger, I probably never should have uttered the phrase last year, “I never met a Thai restaurant I didn’t like”. Well, after having a solid string of restaurant visits all over New Jersey and even out of state with this particular cuisine, I finally ran across my first dud. Pru Thai in Clinton managed to take that theory I had and kick it to the curb. But it was not all bad. Actually, it started out rather promising. Perhaps that is why this let-down stings harder than most other lackluster dining experiences.

After walking around the historic Red Mill Museum Village and then crossing the river to explore the Hunterdon Art Museum, we were hungry. Torn between grabbing sandwiches and something more exotic, we headed over to Pru Thai. They are located down a small alleyway named Dickens Lane. There is a large walled fountain across from the front door. It was charming. There was a statue in the foyer. The walls were dark and it had a decent decor. 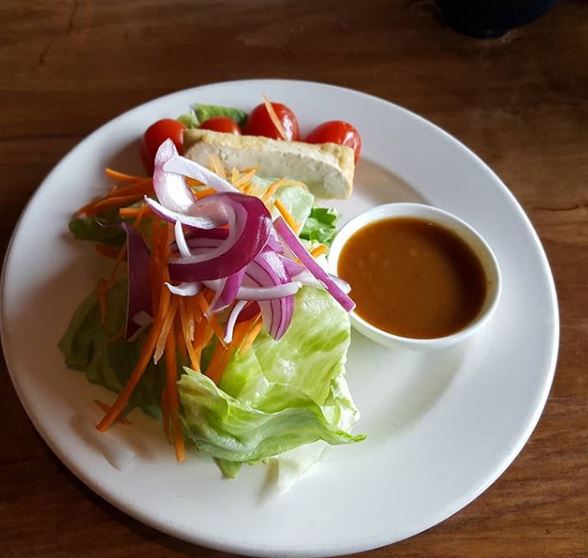 We were sat with menus that included some promising and well-priced lunch specials. Our waitress looked like she wanted to be anywhere else than where she was. Like Thai Thai, they had an array to choose from and priced accordingly depending on if you wanted chicken, pork, beef, shrimp, or vegetables. On this rare occasion, Justin and I both ordered the same thing: Massaman Curry. He wanted chicken and I got pork. Specials came with a choice of soup or salad. He got soup, which contained chicken, while I opted for the salad. It came with a delicious peanut dressing and a colorful display of vegetables, as well as a strip of tofu. I enjoyed my salad but his soup lacked flavor. Overall, it was weak. Just a simple broth with tiny pieces of chicken and vegetables. Nothing standout at all. 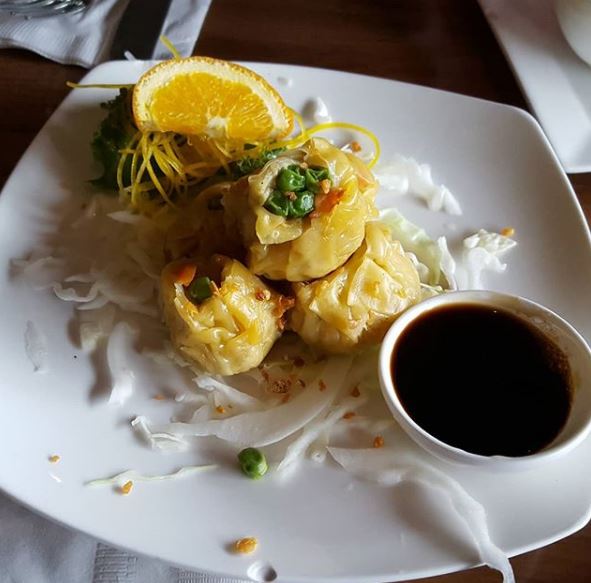 Pretty soon after, the meal would reach its apex when our appetizer, Kanom Jeeb, arrived. There were five little pocket-like dumplings stuffed with minced chicken and peas, served with a thickened, sweet soy sauce. The flavor for these little morsels was through the roof. I could have eaten another order (or two) by myself and walked out of here satisfied. The Kanom Jeeb was so good, in fact, that my mouth watered in preparation for the entrée that was to come. Surely, this was going to be a real gem. 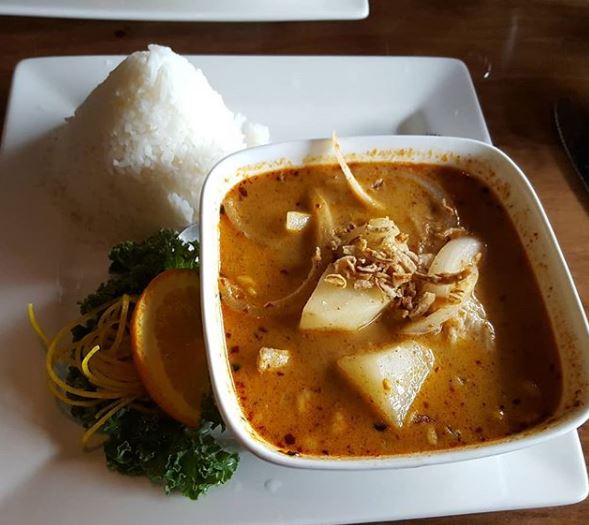 Our Massaman Curries were set down at the table, and it looked like the real deal to me. Again, I was excited. I used my chopsticks to grab a piece of pork and that is where the trouble began: it was rubbery. I struggled to chew it. The potatoes present were exactly the opposite, practically raw. The curry sauce itself had no flavor whatsoever and despite us both wanting extra spicy for the heat level, was not even mild. The waitress brought over the spice rack with chili sauce and chili seeds so we could make it hotter. While this did the job on heat, the flavor was still lacking. The sauce or broth was like brown water. Not one piece of pork was cooked properly. He was not crazy over his either. I picked at maybe two or three pieces hoping to salvage something, but in the end determined it was not worth the calories or the frustration.

So there you have it: the pork was cooked too much and the potatoes not enough. While I appreciate a lack of salt, the flavor must deliver. It did not. Even the rice was a bit off. On the dry side, it felt like maybe it had been sitting around too long. I don’t think I’ve ever been to a place that contained an outstanding appetizer and a dreadful meal. It was a shocker and an outright disappointment. I’m not in Clinton often, but next time I’ll go with a sandwich at a nearby cafe. Pru Thai gets 2.5 out of 5 stars and is only that high because of the Kanom Jeeb.