Yay! Looking forward to your report!

Thanks to everyone who weighed in- I’m happy to report we had an absolutely lovely meal at Contessa last night and the spring onion was suitably impressed and wowed.

It is, as advertised, a magnificent space with unquestionably the best view in the city. From our window, we could see the Zakim bridge, Encore, all of downtown, the Common and the Public Garden. The chairs are comfy and luxurious; the plates rimmed in gold. These are the kind of things that wow an 11 year old, but truly I was loving it too.

We started with a Shirley Temple for the young lady, and a lovely sparkling rose for me. Usually I make her throw out the scarlet FD&C red #5 cherry, because yuck, but this was a natural undyed maraschino which I let her eat, and which blew her mind. We had illusions of sharing an appetizer, but the waiter, who was a charming 20-something Italian man with a delightful accent, promptly brought a spread of focaccia, olives, and chunks of parmesan nestled in a balsamic reduction, so we knew additional courses would be unnecessary.

As predicted, we had two pastas and a dessert and just squeaked by in 60 minutes to make it to the excellent production of To Kill a Mockingbird. Spring onion was delighted with her shrimp mezzaluna- I’m guessing local rock shrimp both in the pasta filling and the sauce and they were sweet, tender and so shrimpy. (Interestingly, the menu is very spare and does not tout the provenance of each and every morsel. In a way, it was refreshing.) I had the rigatoni carbonara- an unconventional choice for me, as usually I would pick something lighter but I was curious about their version and it did not disappoint. The sauce was highly peppered, and the guanciale was well-rendered and crisp. For dessert, we picked the Boston Cream, which I would describe as a layered trifle with the flavors of Boston Cream Pie. We left full and happy, with the total check just under $100. While some of the larger secondi plates are quite pricey, I thought the pastas were reasonably priced and sized such that we finished them without leftovers, but certainly didn’t need any more. All in all, a success.

(My husband and younger sprout by way of contrast, went to Dumpling House and without my steadying influence, ordered such a feast that not only were they moved to a larger table to accommodate their plates, their bill was higher than ours!)

Glad it worked out for you and you had an enjoyable meal. We were supposed to try Contessa recently on my son’s birthday, and wouldn’t you know it he vetoed in favor of his favorite Dumpling House as well. We have had the same problem of not enough room for the dishes.

Sounds like a great meal and experience! Glad it worked out so well!!

(My husband and younger sprout by way of contrast, went to Dumpling House and without my steadying influence, ordered such a feast that not only were they moved to a larger table to accommodate their plates, their bill was higher than ours!)

Wish they would post their dinner. But nevertheless, good for them (and hopefully there were leftovers to tote home). Great day for the Parsnipity clan!

Fantastic! I’m very impressed that they accomodated you. Adults are in charge, apparently. And thanks for reporting back – you’ve whetted our appetite to give Contessa a try.

As, with others, I’m curious now for the Dumpling House report. Love the larger table detail.

Ask and you shall receive! Tonight, we worked on the leftovers from the Dumpling House extravaganza. Among the dishes ordered and brought home were:

That’s a total of 6 entrees and 3 orders of dumplings. For a 9 year old and her dad. They tell me they were thinking of all the time they’d save me from cooking for the rest of the week. Luckily, this was documented because my husband is much better at remembering to photograph things than I am.
Note the empty seat to her left- this must have been post-table-move. 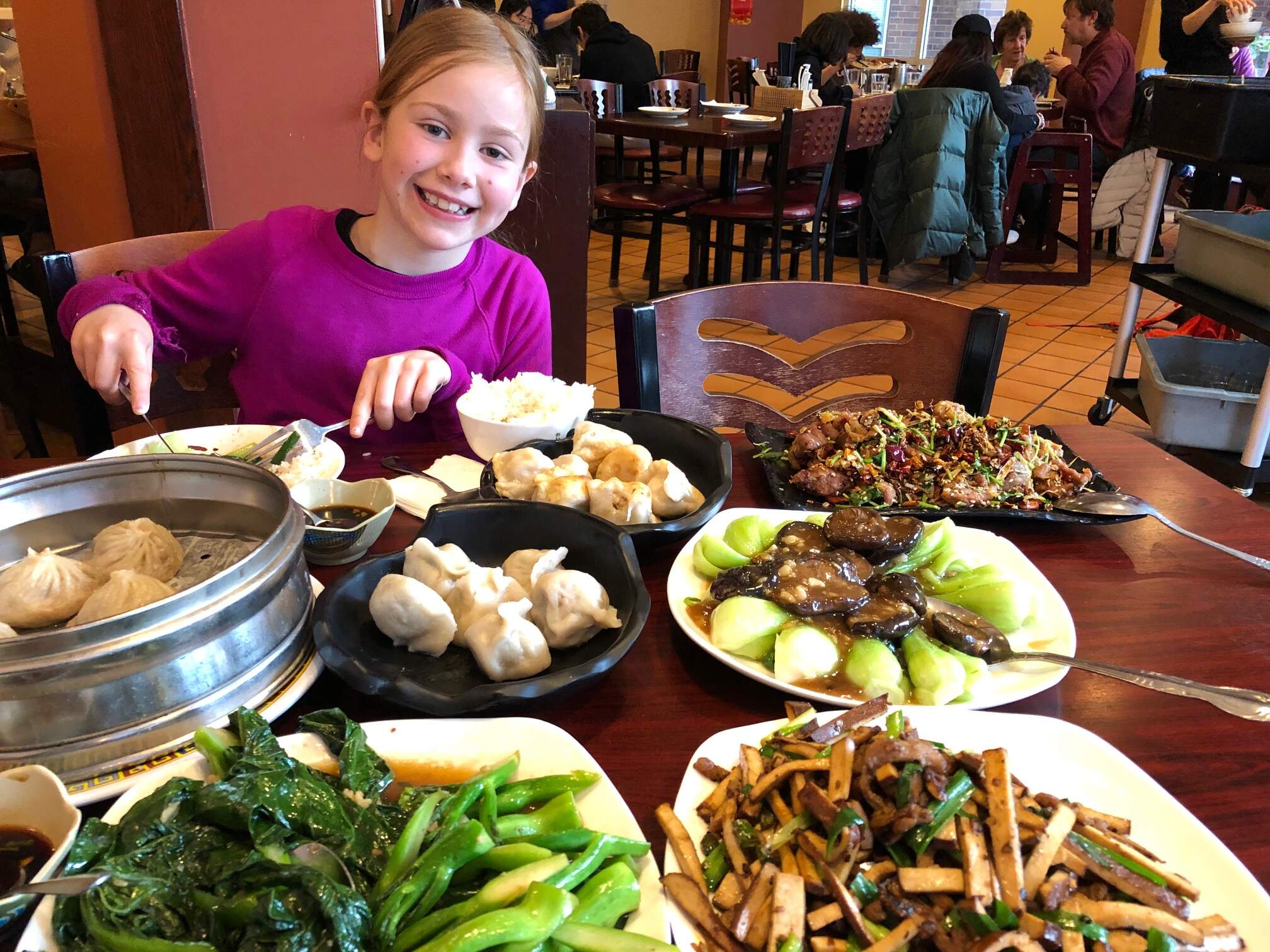 That’s delightful, and what a great photo. You have a budding foodie on your hands.

Outrageous! I love it! (Plus the justification that the leftovers would save you from cooking this week is admirable, noble even.)

So a quick Google search shows Dumpling House in Newton and one in Cambridge. Which is this? Also does anyone know if they have the same owners. I’ve been wondering about the Cumin Lamb on the menu if they are (or this is the Newton outpost).

Already, 2 young foodies, and may some day they switch locales and parents to duplicate their eating experiences!

Great report on the food! Sounds so delightful and wonderful details on the view, the food, and the delightful server; bonus points on the natural maraschino cherry! And the follow up report on the dinner for the younger!

Off topic so may not be allowed…I am wondering about the reactions both of you had to the live performance. The movie was so incredible and I’m really interested in what I read about the modifications in the script and also an older-than-child-age Scout actress.

To return to food, sounds like the reservation you were able to get before the 6:30 performance worked out really well. I know Things Change…was Contessa ultimately the only restaurant that could work with your theater schedule?

I’m no @Parsnipity but I imagine it’s the one on Beach in Chinatown.

Although I guess that’s a Gourmet Dumpling House, so my guess must be wrong.

It was Dumpling House in Cambridge, on Mass Ave between Harvard and Central.

I think their House Special Cumin lamb is excellent.

Off topic so may not be allowed…I am wondering about the reactions both of you had to the live performance. The movie was so incredible and I’m really interested in what I read about the modifications in the script and also an older-than-child-age Scout actress.

Oh, I don’t think we have such a volume of content on this site that anyone will object to a small digression. I was a bit taken aback by the adult actors portraying Scout, Jem, and Dill. Also, Dill’s character was played as kind of a comic relief/clown which didn’t quite sit right with me. I also did not love Scout’s affected southern drawl- that probably bothered me more than her age. I did, however, appreciate the license taken with the sequence of events- the trial scenes are interspersed thoughout the production, instead of a linear approach. It’s been probably 30 years since I saw the movie, but we had read the book a few weeks ago and the production took as an absolute starting point a good familiarity with the book. There is no chance someone without that background could have followed half of what was going on, but for those of us with a recent re-read, it did keep it fresh and interesting.

In answer to your other question, I also would have been able to reserve at No 9 Park, but I thought the pasta options at Contessa would have been better suited to my sprout, and it really was the perfect ambience. I would normally not pick high end Italian for myself, so the opportunity to go in a different direction was nice.

I thought it might be from the look of the faintly two-part room (I’ve eaten there off and on), but having been wrong once I was too timid to be wrong twice. But you’ve put them back on my map. Thanks.

Thanks for comments on both the performance and the food!

Sounds like a great performance. I too would find the adult actors playing children and Dill played as a clown and affected southern drawls somewhat distracting, though it’s good to hear the non-linear sequencing worked well. If I ever get to see it in person or view it online somehow, I’ll re-read the book (with pleasure). I’m a NC native who left in 1977 and I can’t manage a southern accent myself that sounds even quasi-authentic to me unless I’ve talked recently with a someone who has a current “authentic” southern accent. Hearing others in any context attempting “southern drawls” without training or personal, lived experience is cringe-worthy.

I am hoping what used to be the annual Flamenco Festival in the theater district will be revived and our son will be interested. If so, I’ll check out Contess and No. 9 Park first for food before or after.

I know the OP’s event has passed, but I want to add a suggestion for future theatergoers. Yesterday, we went to an afternoon performance at the Emerson Paramount. It was over at 3:30, and we wanted lunch/dinner close by. Checking on Yelp, we saw a well starred and reviewed place called “French Quarter” featuring cajun/NOLA food (one of our favorite cuisines!). As we left the theater and checked the location/route, we looked up and saw the sign, right next to the theater!
We didn’t have a reservation (who’d think you’d one at 3:30?) so we sat last the mostly vacant bar. Good choice watching the capable bartenders making classic NOLA cocktails (NO is where cocktails were invented, from what I’ve heard).
We had beautiful Sazaracs, with the glass misted with absinthe. OK, too they didn’t have Sazarac Rye (hard to get around here), but you’d never know it. We shared good cornbread, gumbo ya-ya, and and an excellent shrimp and grits. We still had room for a shared dessert and struggled to choose from some classics. We settled on Beignets, given the promising renditions of our other choices. We have not had anything resembling Cafe du Monde or Morning Call beignets. These were close, but too big, and not enough powdered sugar. The could have made the serving of 3 large rectangles into 4 or 5 smaller squares, doubled the powdered sugar, and Boston would have a real contender for creditable NOLA beignets.
Prices were reasonable, service pretty quick, food delicious. By then way, the place was pretty full when we left. We’ll be back but next time, we WILL make reservation!!