They want craft cocktails. I tend to stick to the same rotation of classic watering holes around the North Beach-Chinatown-Nob Hill-Tenderloin region. We have dinner at The Progress next Thurs. night at 8pm. I’d like to try and keep within a reasonable distance (Uber) but I’m willing to trek out to SoMA or somewhere I suppose if it’s really merited. I’m guessing the closest worth considering are B&B, Tradition, Whitechapel and S.C. but they’ve been to all but the latter and I don’t want to do heavy drinks like that before our meal. So what’s new and noteworthy these days? Bonus points if it happens to be relatively convenient to our dinner plans, but it’s not necessary. They’re staying near N.Beach and we’re not far from the restaurant, around Van Ness + Cali. Not that it really matters though.

How’s the bar at Quince? I’ve only been for champagne and appetizers in the lounge, but it’s 2-minutes from their hotel and really convenient. I think I may have ordered a cocktail once before a seating at Cottogna but I can’t remember. Do they do interesting mixed drinks?

Quince’s Bitter Heart cocktail makes a nice aperitif, request also their Pliny cocktail (unlisted) from Mike. Hakkasan is another option for interesting drinks (snap pea or tobacco drink), or the bar at Saison.

Thanks! Does Quince have a decent variety of cocktails on the menu or is it the usual well-made standards plus a small rotation of seasonals? Hakkasan sounds perfect but I imagine Quince would be so much more convenient for a Thursday evening around 6-ish in the Lounge. I’m saving Saison for a date night with my wife, as I really want that uni toast! Too tempting before a full sit-down meal.

All of quince’s cocktails are originals iirc but they can probably make some of the standards too.

Perfect. I was just asking because I seem to recall something like only 7-8 house cocktails with different bases alongside classics and several pages of wines, liquors, etc. from my (unreliable) memory. That’s always risky when you’re with 4 other people because none of us are into vodka or tequila, and then you’re left with 5-6 drinks to chose from, and not everyone will share the same level of enthusiasm towards each drink. I just wanted to make sure they have a pretty diverse and well-rounded cocktail menu with interesting & creative selections to chose from. Sounds like we’ll end up at Quince… or I’ll suggest it anyway!

your memory is correct, however, i don’t doubt that they can make drinks off the list upon request, as they did when i requested a drink with Pliny ale. Progress has a drink with tomato caramel which I haven’t tried yet but I did try their cheesecake with tomato caramel which I enjoyed. At Progress I usually just ask for 2 oz stout/1 oz Swedish punsch / 1/2 oz Rittenhouse rye, stirred and served either up or with a single big rock.

Okay, that’s great; we’ll give it a shot!

If it doesn’t work out, pabu is another option, very diverse and interesting list 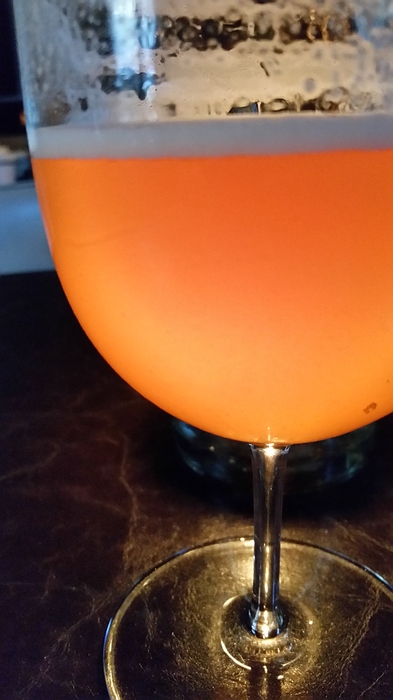 The other couples’ flight got delayed 2 hours so we ended up skipping the pre-drink afterall!

Cocktails at Progress were excellent. I really enjoyed the Harvest Moon, though mine came garnished with a dried apple slice while the table beside us were served orange twist. I guess they ran out.

Food on the other hand, was not good at all. The grilled octopus was overcooked, chewy and tasteless. Uni dish was completely mind boggling… literally plopped on a pile of guacamole and served with rice chips. It tasted like something a stoner with a really well-stocked kitchen would whip together and made no sense whatsoever. A wedge salad was admittedly very good, but big deal. Cod salad with braised beans was terrible and extremely fishy. Nobody touched it. Beef and bone marrow dumplings were also not very good, which is surprising as I’ve had them before and enjoyed them very much. Everything else was just bland to the point of me not even remembering what else we were served. There were at least 2-3 other dishes and they were all consistently boring and lacking in both imagination and flavor. With the exception of a kimchee starter, all of the small “amuses-bouches” style table bites were no better than what’s offered at the Whole Foods fresh counter. One was an ordinary beet salad; obviously they weren’t even trying last night. Really disappointing experience and WAY overpriced at $300+ (we had a fair amount to drink) - I took home lots of leftovers because so much went uneaten and ended up giving it all to a homeless guy outside the church on Van Ness & Sacramento this morning. We could’ve had a veritable feast at any of the Richmond area Chinese banquet restaurants which would’ve been so much more rewarding. It was a complete departure from our last visit 5-6 months ago but enough so that I won’t be back, unless it’s in the bar.

We ended the night at White Chapel and regretted not having eaten there instead.

Edit: To be fair, there was a potato and kelp dish which just sprang to mind that was pretty good, but nothing to write home about.

Picture is the cocktail with Pliny ale at Quince (new bartender so slightly different version, drier and hoppier). Sorry Progress didn’t work out. They don’t have the duck, squab or crunchy fried rice currently so I would agree their menu is less interesting at this time. Maybe you can cross the street to Mosu next time.