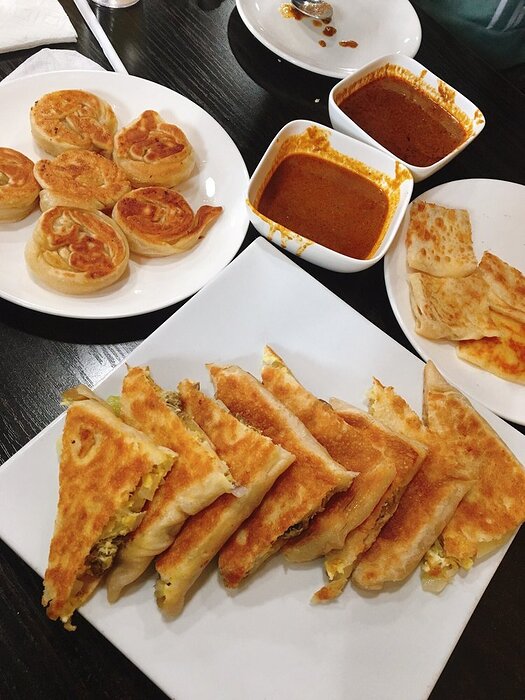 Only Singaporean Indian restaurant in Los Angeles. We are very popular for our bread Roti Prata/Canai/Parotta,Dosa's and Biryani's

Has anyone eaten at this Singaporean/Southern Indian restaurant?

Menu is truly fascinating, though unfocused (ramen? churros?). Other than reading @klyeoh’s wonderful posts, I have zilch knowledge of the Singaporean foodways.

When I noticed this place open, it immediately shot high up the to do list. I remember waking up everyday in Malaysia and Singapore craving Indian food. Can’t wait to try this place, will be soon.

Thanks, @ElsieDee. This looks more of a Singapore-Indian restaurant (one of my favorite kinds) than the more Singapore-Chinese or Singapore-street food versions (i.e. those offering kaya toasts, laksa or Hokkien mee). Its nasi lemak offering on weekends is a nod to Singapore’s multicultural makeup, though - of Malay origin, nasi lemak is a fave among all of Singapore’s main ethnic groups (Chinese, Malay, Indian).

Singapore’s prata is a lighter, crispier version of the Indian paratha/parotta and, if done well, is the best thing one’d ever taste anywhere. I envy you guys in LA - you seem to be able to get everything there.

Thanks to @ElsieDee for the info, we decided to make the long trek out to try Prata House, which on their website bills itself as the only “Singaporean Indian restaurant in Los Angeles.” Which sounds unique and different. 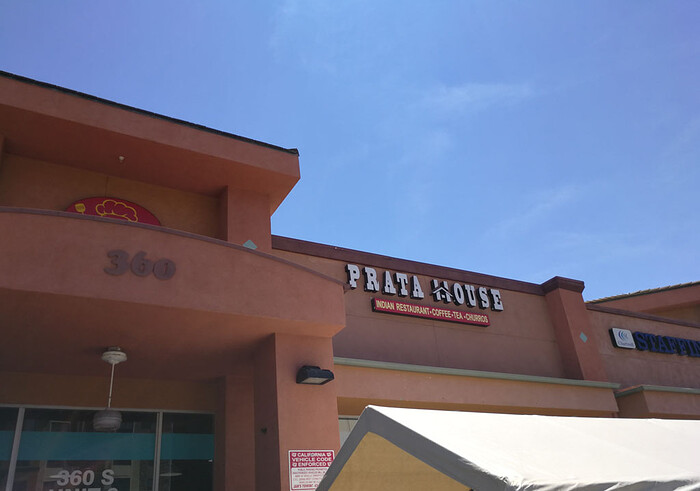 Interestingly, their actual signage lists them as an “Indian Restaurant,” and speaking to the server, she clarified that Prata House’s menu was essentially “Indian food that you’d find in Singapore”, with its slight change from traditional Indian food (she said it was made to cater to the tastes of the locals in Singapore). So it wasn’t some strange “fusion” of Singaporean and Indian dishes mashed together.

Looking over the menu, most of the menu has familiar sounding Indian cuisine dishes (Samosas, Chicken Tikka Masala, etc.), but they had a section that had some Singaporean style dishes as well, like Mee Goreng, but they also have… Spicy Vegetable Ramen?! 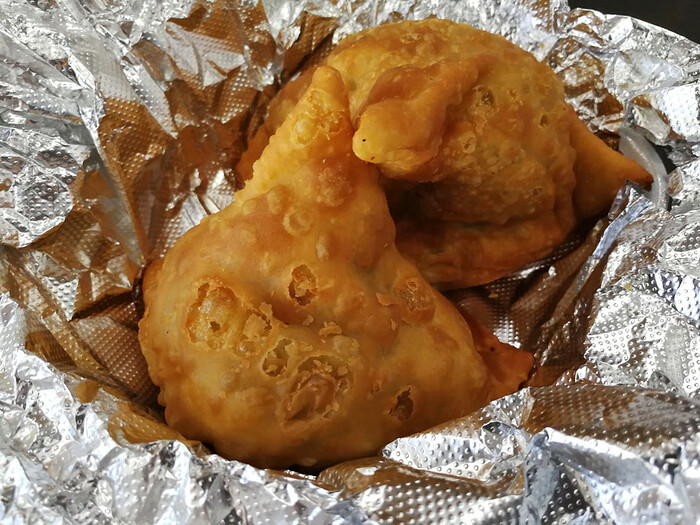 Surprisingly spicy! This is probably the spiciest Samosa that I’ve had in the past few years(!).

The actual crust was fine, a touch too thick, but otherwise tasty. 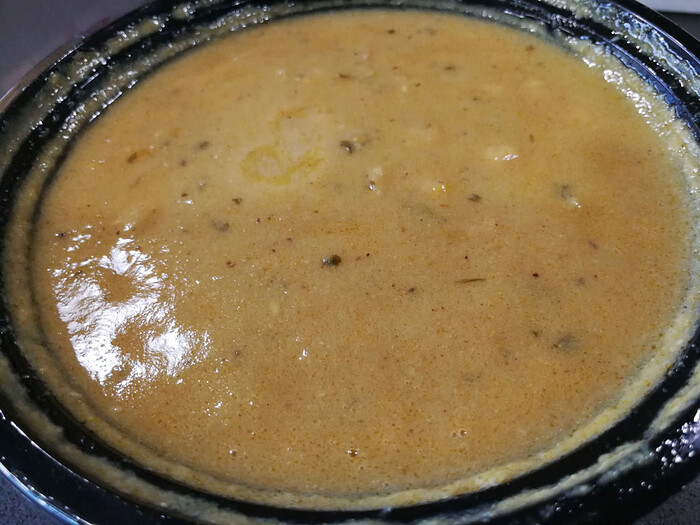 This was a bit surprising: We’ve had Chana Masala many times before, so Prata House’s version took us aback with its light yellow color that reminded me of Yellow Dal (Lentil) dish more than Chana Masala. Taste-wise? This was fine. Earthy as you’d expect with Garbanzo Beans, stewed, rather light and one-note. We didn’t really get much Tomato flavor coming through at all.

Garlic Prata (Prata Made with Garlic): 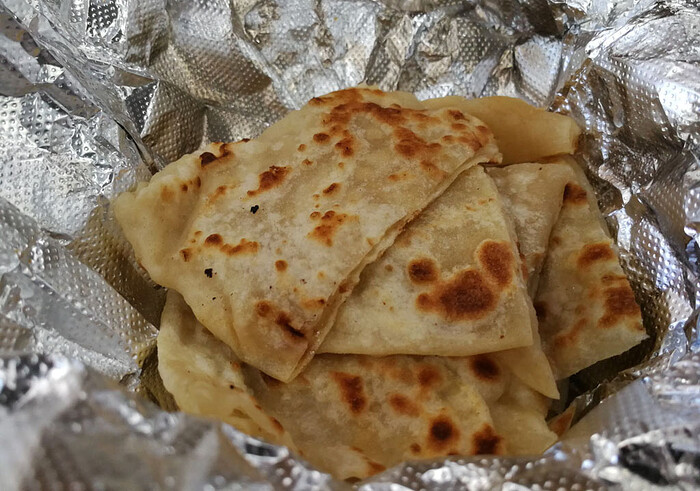 The namesake dish of the restaurant, our order taker said that their Prata (or an Indian Flatbread) was a “must order!” We couldn’t wait, but we asked the order taker to not cook the Pratha until we arrived (we were only about 15 minutes away at this point). She said, “no problem.”

When we arrived, our order wasn’t ready yet, but it came out maybe 2 - 3 minutes later. We immediately opened up the bag to open the Pratha container to make sure it didn’t steam.

Sadly, it was totally soggy.

Clearly, they ignored our request and cooked the Pratha immediately (or gave us leftover Pratha?). So these were gummy, chewy globs of dough. 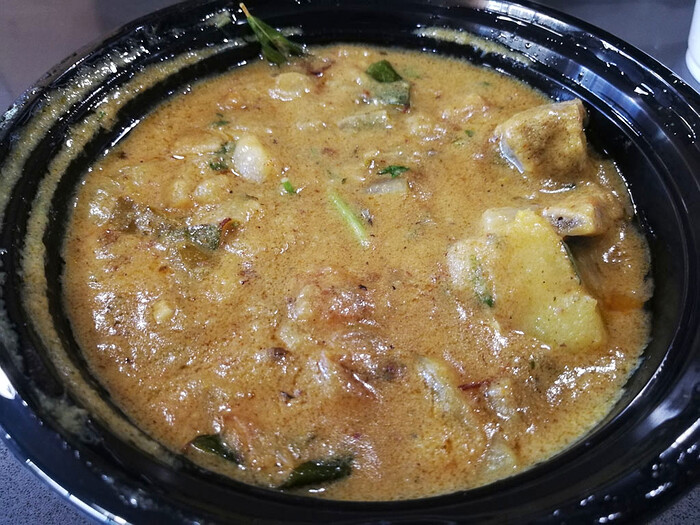 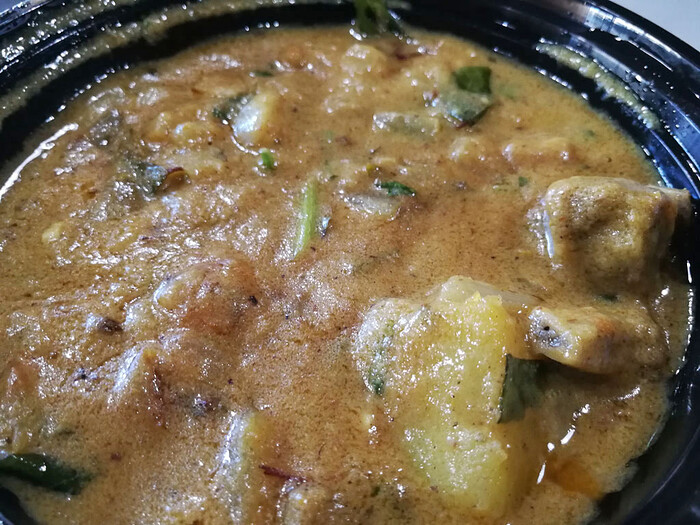 This was the best dish we had: The slow-cooked Goat was tender, gamy, their Masala flavor here was less Garam Masala-centric, and a bit more mellow. I can see why the server said that their food was different from traditional Indian recipes (just slightly). It felt a bit “simpler” in some ways, less complex.

There are other menu items that seem sort of interesting, but given the execution and flavors we had so far (and given how far it is), we might not be in a rush to come back to Prata House at this time. It’s not “bad,” and I’m sure Singaporean ex-pats might appreciate the flavors here more, but for my tastes (growing up eating various Indian restaurants locally), the recipes taste more simplistic.

Only Singaporean Indian restaurant in Los Angeles. We are very popular for our bread Roti Prata/Canai/Parotta,Dosa's and Biryani's