Not long ago I noted that the space vacated by ABC Bakery & Cafe on Jackson Street in Chinatown would be filled by a new member of the Spicy King "empire., Pot & Noodle. I have more information now on Pot & Noodle’s role in SK’s scheme of things.

The Spicy King people are importing state-of-the-art noodle-making machines from China. Since (at least some of) the restaurants they operate do not have enough space to accommodate these machines, they will be installed in the capacious basement of the Jackson St. establishment, which will serve as a central facility for the making of fresh noodles for their roster of stores (see the window graphic below).

As for Pot & Noodle itself (oddly also named “Chongqing Xiao Mian” in Chinese), in addition to serving some of the same noodle and side dishes as their other restaurants, it will offer “House Special Mini-Hot Pots” for $16.95 and also have a “Fresh Juice Bar” serving fruit juices for $4.25-$4.50 (see menus below). 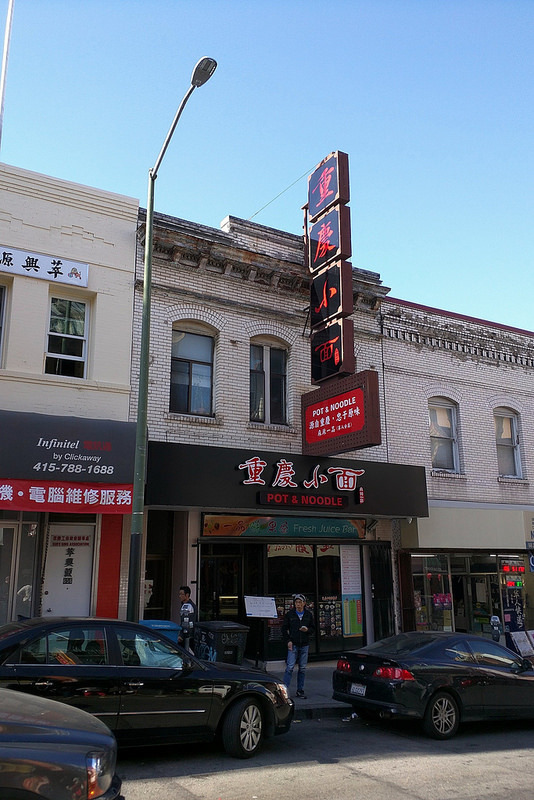 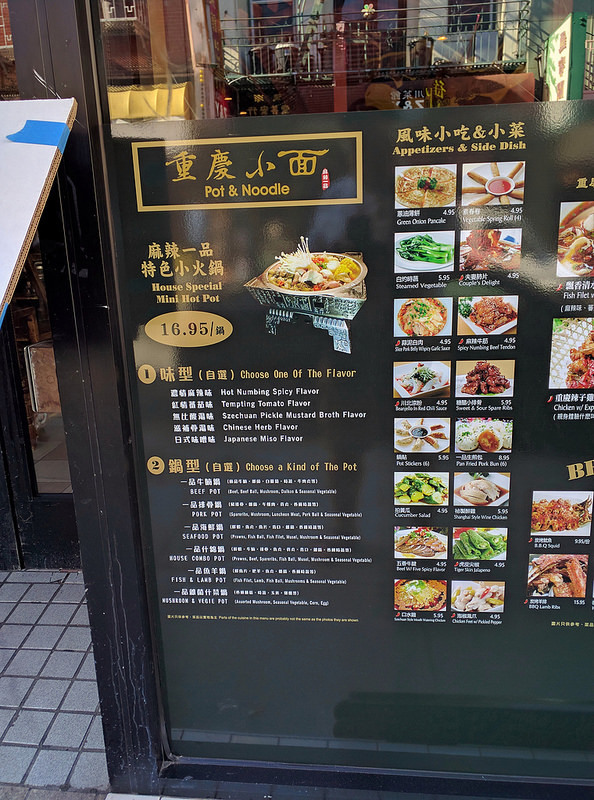 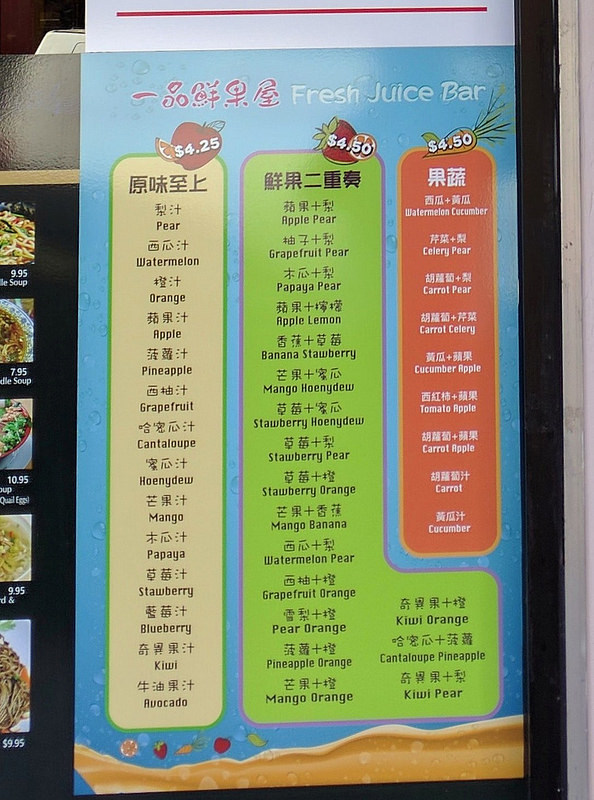 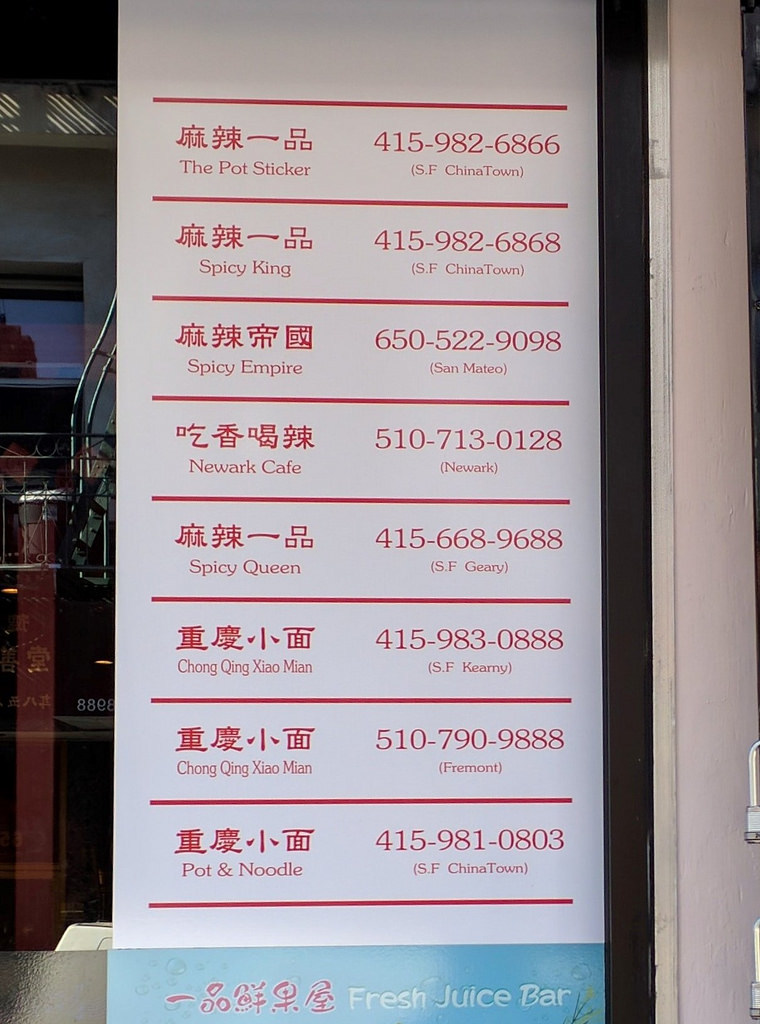 They are like the Starbucks of Chinatown now. One on every street.

The Pot Sticker, Spicy King and Spicy Queen also all have the same Chinese name - Ma La Yi Ping, which I understand to mean something along the lines of “Top Level Ma La.”

FWIW The Pot Sticker was the first restaurant they ran (it was called The Pot Sticker before they took it over) but no longer exists (new owner, new name). I guess they keep it on their list for sentimental reasons.

Spicy King is now the team’s flagship restaurant, in effect, which is why I refer to it as the “Spicy King empire.”

Surely it should be the “Spicy Empire,” with the restaurant of that name as its flagship?

Actually, I think the San Mateo restaurant was the first one with these owner/chefs, no?

I ran into one of the waitstaff in another setting, and he told me that among the SF branches at least, Spicy Queen is the most authentically and consistently Sichuan in cooking style, due to the fact that Chinatown caters mostly to tourists, whereas the Richmond branch caters mostly to students from China.

Du and Wu left Z&Y and took over the Pot Sticker in 2010 as their first “Ma La Yi Pin,” while keeping the English name the same. It operated on a month to month basis, as they had no lease. They took over Uncle Cafe just down the street on Waverly as a more permanent solution and made it their second “Ma La Yi Pin” and gave it the English name “Spicy King” in (I think) 2013.

I believe the San Mateo restaurant opened in 2011 which would make it the oldest unless you consider The Pot Sticker and Spicy King the same restaurant, just moved down the street. Since they now have 4 restaurants in SF and placed Spicy King second on their “Hall of Fame” poster, I saw fit to dub Spicy King the “flagship.”

On a hunch, I went by Pot & Noodle yesterday at dinner time. It had just opened that day, so I wandered in and went for the Wuhan Hot Dry Noodles (for a change) and the fu qi fei pian (“Couple’s Delight”).

The reganmian was well decorated with garnishes, including whole peanuts, but the sesame sauce was a little too viscous. The young woman server seemed to be aware of this, and was immediately at my side to vigorously stir it for at least a full minute to get the noodles past the clumping stage.

The fu qi fei pian didn’t have the paper-thin slices like the version at Z&Y across the street, but was nicely spiced and meaty.

My blog has a fuller review and some thoughts of mine on its place in the Wu-Du empire. 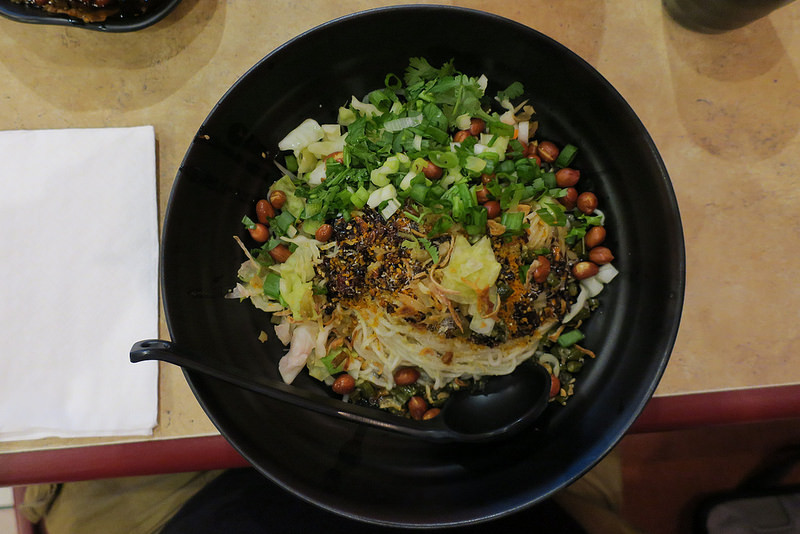 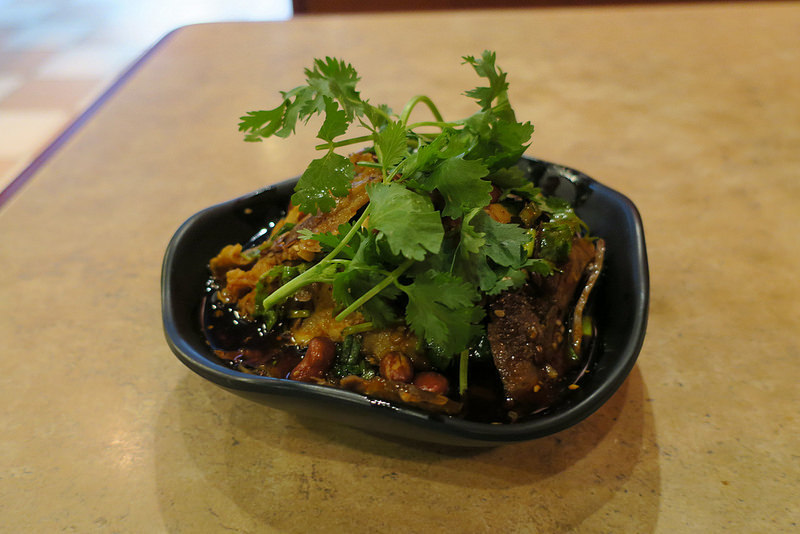 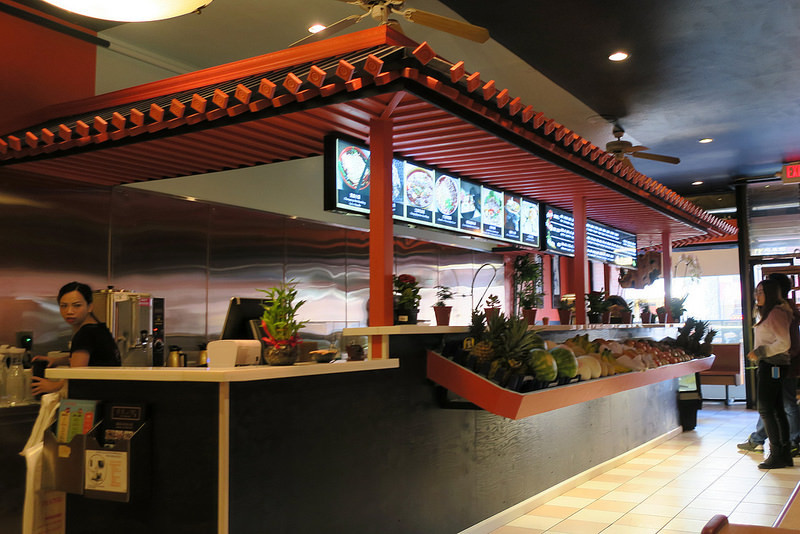 Sudden thought: I initially thought of the juice bar as an incongruous add-on, but it occurs to me that at Pot & Noodle’s pricing it would be a painless expense to spring for a freshly pressed juice to counter the heat of the Sichuan fare. 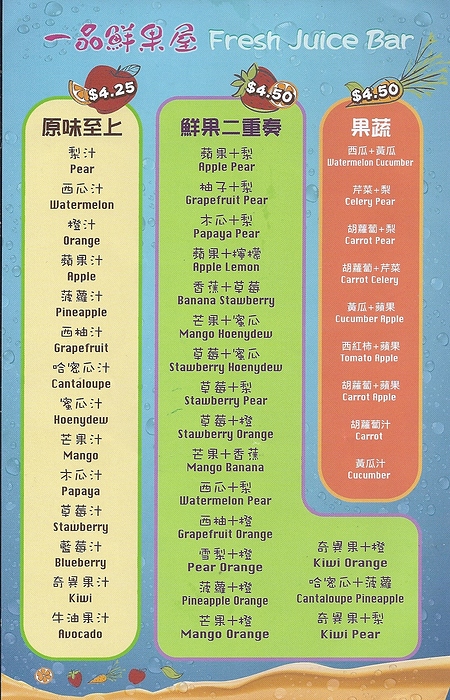 I had the Guilin rice noodle soup for lunch. It came with a tea egg, really tender long chunks of brisket, peanuts, pickled long beans and carrot and some greens. I doctored it with the black bean chili oil condiment on the table, same as at chongqing xiao mian. It was a reasonably tasty (and massive) lunch, but I much preferred the version I had at the Oakland specialist. Might be time to head back across the bay for that.

Also had the spicy tendon cold appetizer, something I could eat every day. This place is huge, in case it’s too crowded at chongqing xiao mian. The noodle and appetizers are nearly identical on both menus. I’m curious about the Sichuan soba.

The menu indicates that the Guilin rice noodle soup comes with quail eggs. I assume that wasn’t the case if yours came with a tea egg, am I right?

Interesting. It looks they have more toppings on their reganmian than at local Hubei restaurants (e.g., toppings were sparse at Hu Bei Restaurant in Millbrae).

Interesting. It looks they have more toppings on their reganmian than at local Hubei restaurants (e.g., toppings were sparse at Hu Bei Restaurant in Millbrae).

A lot more. Scallions are new to me in reganmian.

Then again, as Gary mentioned, there are a lot of variances. I was told that reganmian in certain parts of Hubei doesn’t even have the peanut/ sesame sauce.

Mine had garlic, too, and the chopped stalks may have been garlic shoots. More difficult to tell after being stirred up.

A Google or Baidu image search shows a great variation in the complexity of the toppings. The menu picture at Pot & Noodle shows a much plainer version than what was actually served.

Interestingly, the Wikipedia entry for re gan mian includes a picture of a version from Henan that looks quite similar to P&N’s version:

BTW, did you eat at Hu Bei Restaurant in Millbrae? How did you find it?

No quail eggs, and no pork as advertised.

I had the Guilin Rice Noodle Soup at Chong Qing Xiao Mian around the corner tonight, and the beef and quail eggs were there as promised. Pot and Noodle was closed for some kind of maintenance. 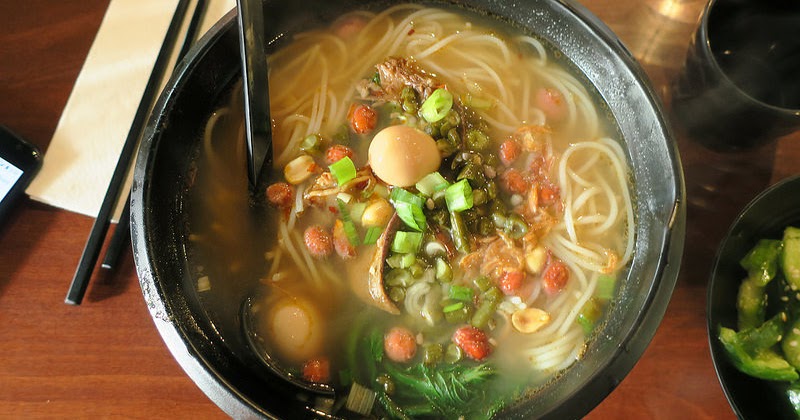 I headed out to Pot & Noodle for Round 2 (Vetting of the Sichuan Soba) but found them closed for some sort of maintenance (installation o...

Actually it was the pork that was absent, it th beef. I do believe both meats were advertised but I could be wrong. I thought the beef was brisket but the plate cut you mentioned makes more sense. I’m happy to hear that the quail eggs are not a myth. I like the whites of tea eggs but I’ve never been able to stomach the texture of long cooked yolks, especially when they’re ashy gray in color.

No mention of pork. But you may have inferred ground pork from the picture or from experience. 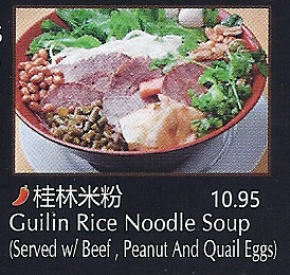 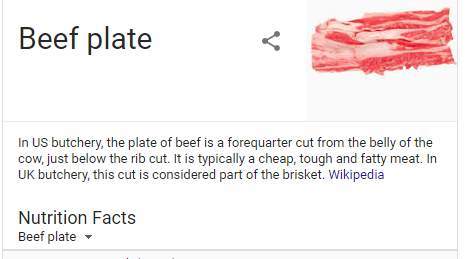 I went here for a dinner and had the noodles with peas and meat sauce ($10.95) which looked interesting. I thought this was only ok. The noodles were cooked a little too well done and didn’t have much chew. The meat sauce looked like boiled ground pork with some slightly cooked peas. The peas in this were a little different from typical green peas and kind of had a texture in between a pea and a chickpea. It was in a broth with a lot of red chili oil on top that was also slightly numbing. The broth was spicy and pretty good, with a good amount of chili bits in it. Some pieces of cabbage in the soup added a different texture.

I also had a side of pan fried pork buns, which according to my server was shenjiangbao. I should have known better than to order shenjiangbao at a non-Shanghainese restaurant, but I had a hankering for some. These were definitely not shenjiangbao. The dough didn’t look like it was leavened at all, and they were pretty small. They actually tasted pretty good though. They were more like xiaolongbao that had been fried a little so that the bottom was crispy. They had lots of juice inside. A bit expensive at $8.95 though for 6 little dumplings. 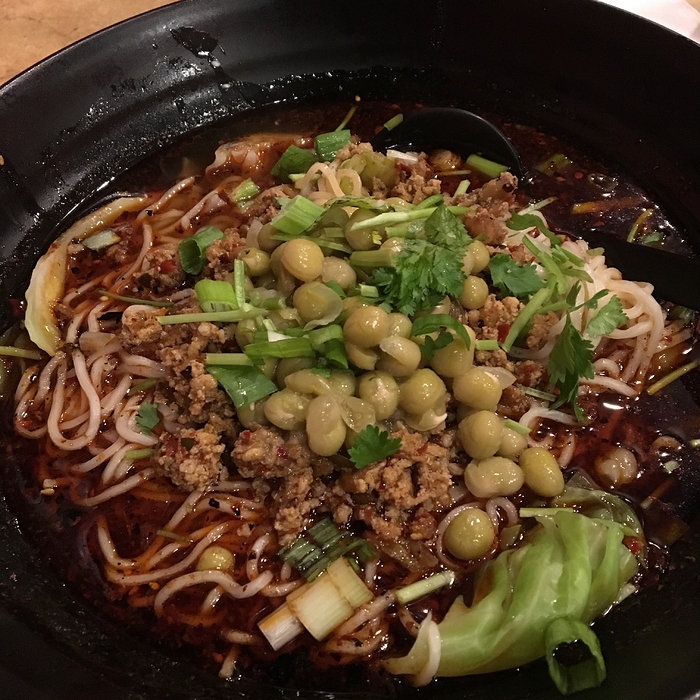 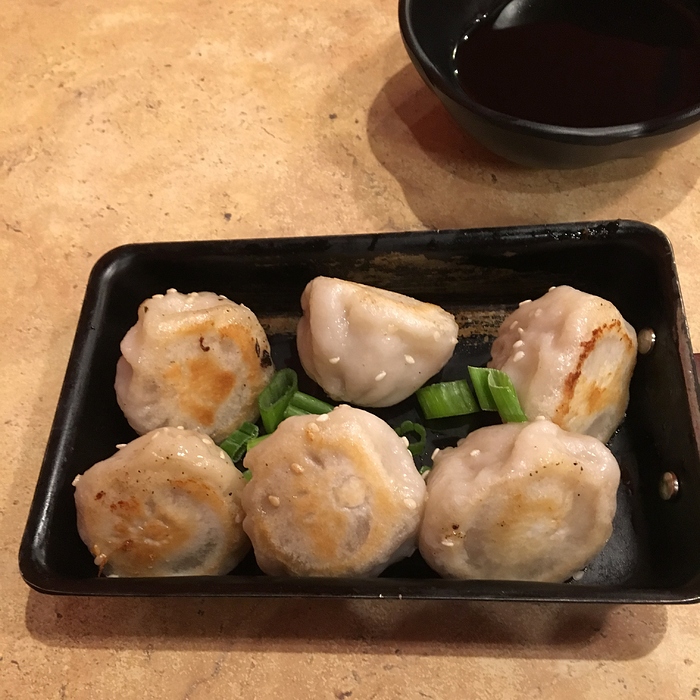