Spent a few days in Portland around the Memorial Day weekend, staying in the Lloyd District. Here are some of the places I visited.

Had a nice lunch at Hat Yai in NE Portland, a restaurant specializing in southern Thai cuisine, particularly southern Thai fried chicken. It’s part-owned by Earl Ninsom of Langbaan fame, which I haven’t had a chance to try.

I had the Hat Yai combo ($17) which consists of a leg quarter of fried chicken plus a fried chicken wing, roti, a southern style Thai curry sauce, pickles (onion, pepper, and daikon), and sticky rice. It also came with a sweet chili sauce for the chicken, and a wet nap.

I liked it a lot. The chicken was quite tender and juicy. Unlike the one other Hat Yai style fried chicken I’ve had before (at Farmhouse Thai in SF) this version had very little breading, maybe no coating at all except for spices. The result was a nicely spiced skin that was crispy yet not shatteringly crispy. The chicken itself was nice and greasy. The roti was quite good as well, especially dipped into the curry sauce, which was quite spicy but didn’t have that much heat. It also was a little sweet. Don’t know if this is how it’s supposed to be or if it’s to appeal to non-Thai palettes. Still, it was very flavorful and was a good dip for the roti and chicken. Messy to eat, the wet nap came in handy. 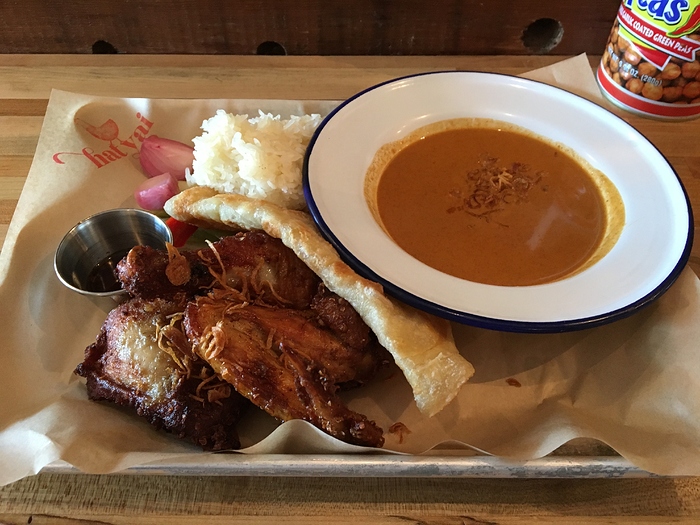 Matt’s BBQ is a food cart in NE Portland which shares an area with two other carts. I stopped by in the late afternoon to try a half pound of their brisket ($10). They only had lean brisket left, so thats what I had. Came with a few pickles and a slightly sweet and hot bbq sauce on the side. It was pretty good flavor-wise, but also dry in parts. The sauce helped. Should have probably gotten there a little earlier to try the fatty part of the brisket. 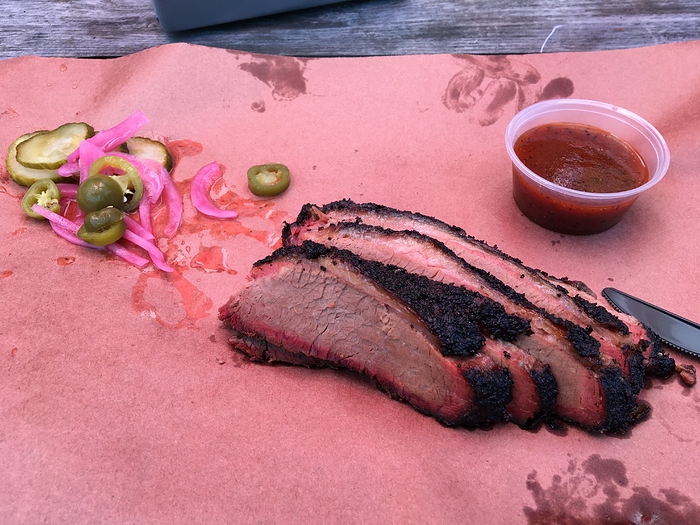 I went back to Le Pigeon to try one of their chef’s tasting menus. They are no longer a tip-free restaurant and so have lowered their base prices slightly. Had the five course menu ($85) with the beverage pairings (+$45). Beef Tartare First course was a beef tartare, with small chunks of beef mixed with green strawberries, scallop powder(?), avocado, and a jalapeño aioli. A little spicy, delicious. [image] Foie Gras Teriyaki Second course was a a piece of foie gras with a sweet demi-glace…

##Coquine
Just had some baked goods here in the morning. Had overindulged a bit the night before so wasn’t super hungry. Had a biscuit and a chocolate chip cookie. The biscuit was quite good, flaky, warmed and served with a savory thyme butter. The chocolate chip cookie was excellent. Got the first of a new batch of cookies and the chocolate chips were a little melty and the bottom was a little crispy. 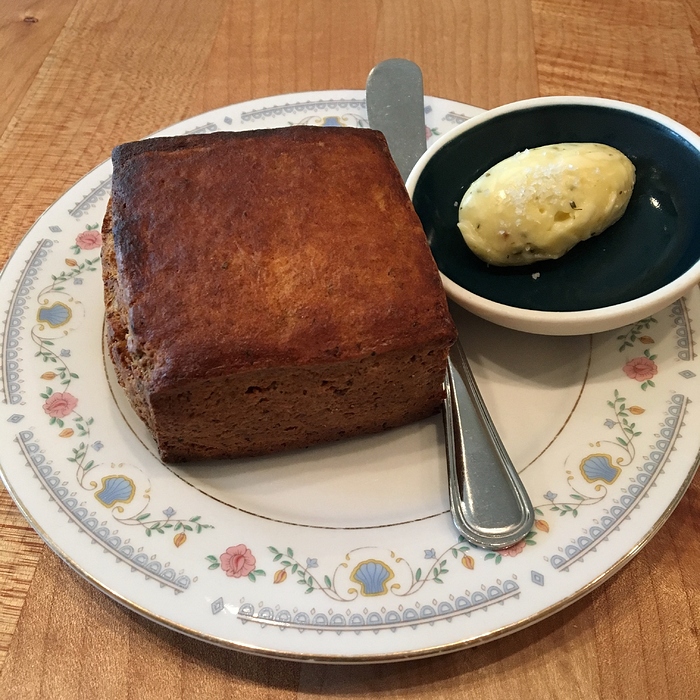 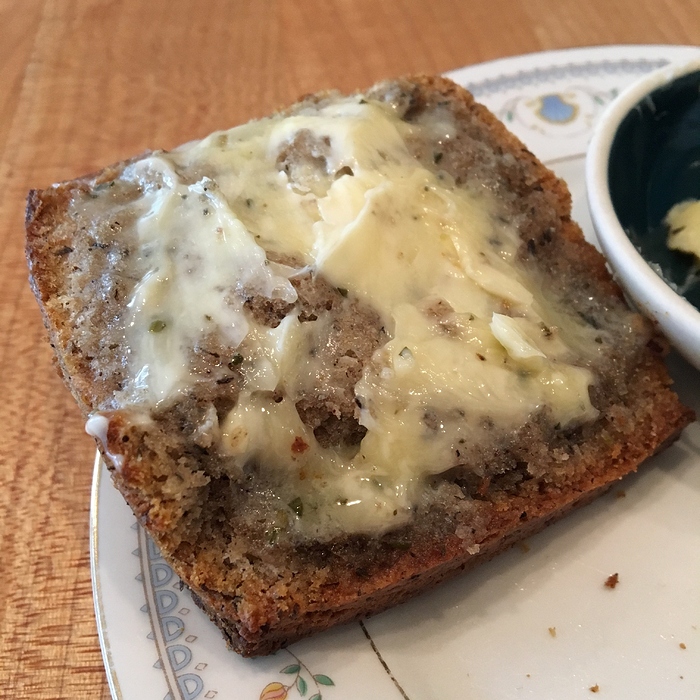 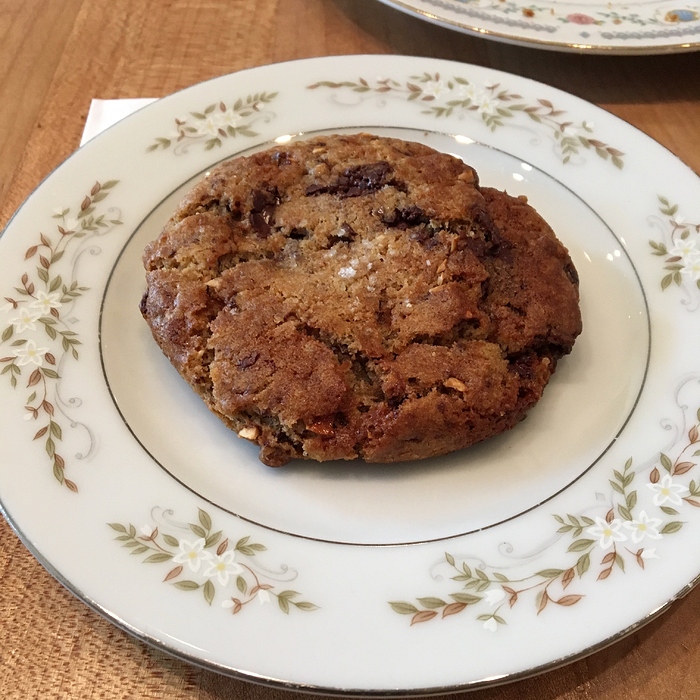 Chicken and Guns is a food cart in the Cartopia pod in SE Portland, also home to Potato Champion and several other carts. Open late. I liked this pod as there are tables where you can sit down to eat, which are missing in the food cart pod downtown. Chicken and Guns makes Peruvian style roasted chicken. I got the quarter chicken ($9), which consists of a leg and thigh along with a little piece of breast meat. I think the breast was thrown in gratis. They also have half and whole chickens, and you can also add an egg. Comes with potatoes or a salad if you want something lighter.

The leg and thigh were both quite good. Juicy and flavorful, with a spicy skin. The piece of breast meat however was quite dry and almost inedible. The greenish Peruvian aji sauce was great - tart, zingy and a little garlicky and slathered over everything. The potatoes were also great, very crunchy exterior and soft inside. 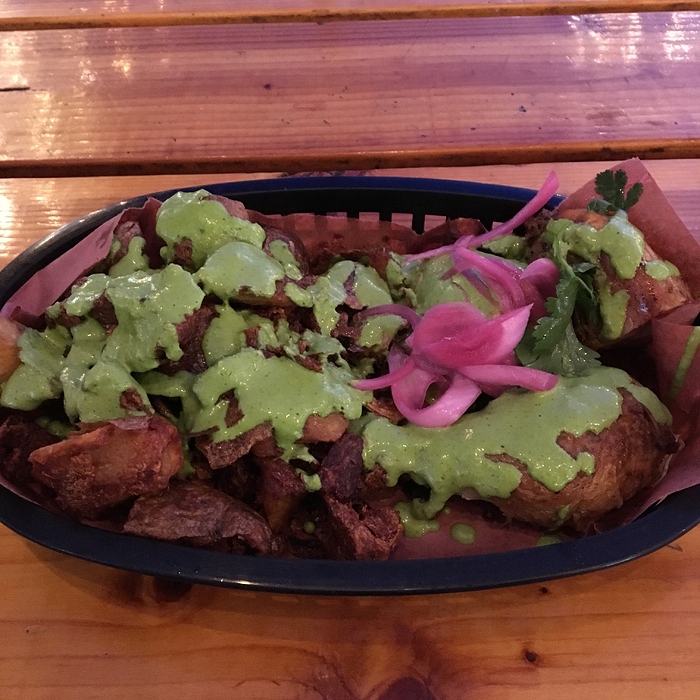 Went to this branch of Pine Street Biscuits one morning for brunch. It’s a small restaurant with counter service. Shares its space with a pizza place.

The Reggie Deluxe
Fried chicken, bacon, cheese, and gravy, with an egg. The non-deluxe Reggie omits the egg. This was a good hangover sandwich. Good biscuit. The fried chicken was crispy and tender. Don’t really remember the bacon. Kind of wish the egg was more runny, it was cooked over medium/hard. The chunky country style sausage gravy with melting cheddar cheese was very good and was a good lubricant for the rest of the ingredients. Wish there were even more of it. Very filling. 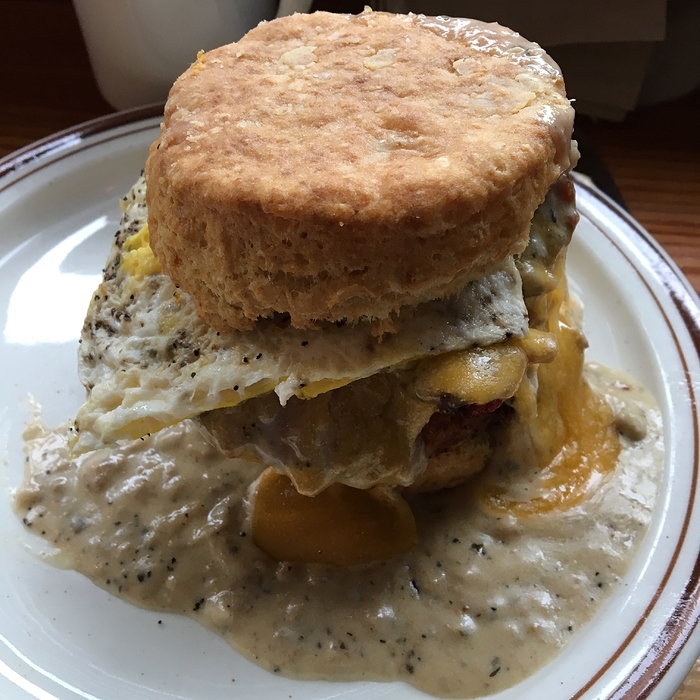 Apple Fritter
From the branch on N. Mississippi. I’ve liked most donuts I’ve gotten from Blue Star but this one was only OK. A little too chewy and dry. 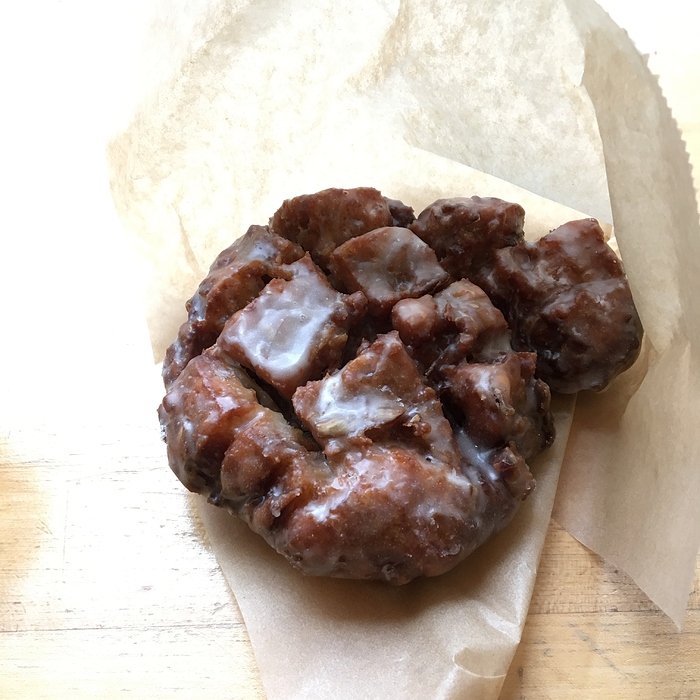 Had an early dinner here on @grayelf’s recommendation. Ended up somehow getting a mostly vegetarian meal. My waiter recommended about 2 dishes per person to make a meal. Everything on the menu was under $20. 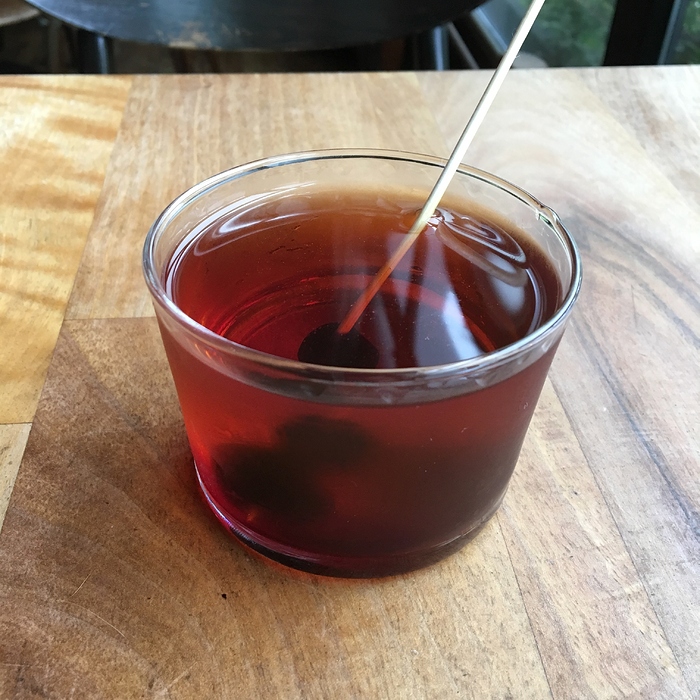 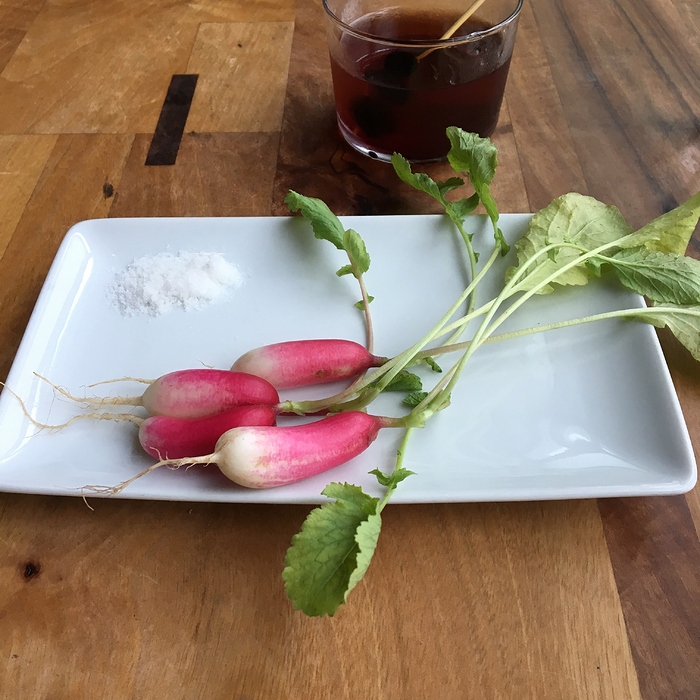 Roasted Little Gems ($12)
Roasted lettuce, with anchovies and diced up hardboiled egg. Very simple, but this was delicious. Lettuce was perfectly wilted and nicely flavored with the anchovies and egg. 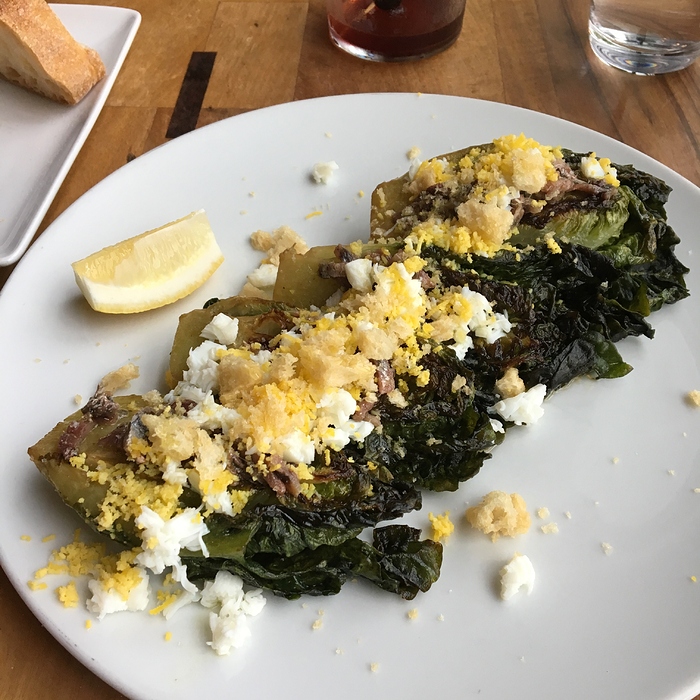 Dumplings ($14)
Delicious. Dumplings formed with cheese and spinach, kind of like the top of an oyster Rockefeller in dumpling form. In a nice rich cream sauce with some very nice morel mushrooms. Sopped up the rest of the sauce with bread. 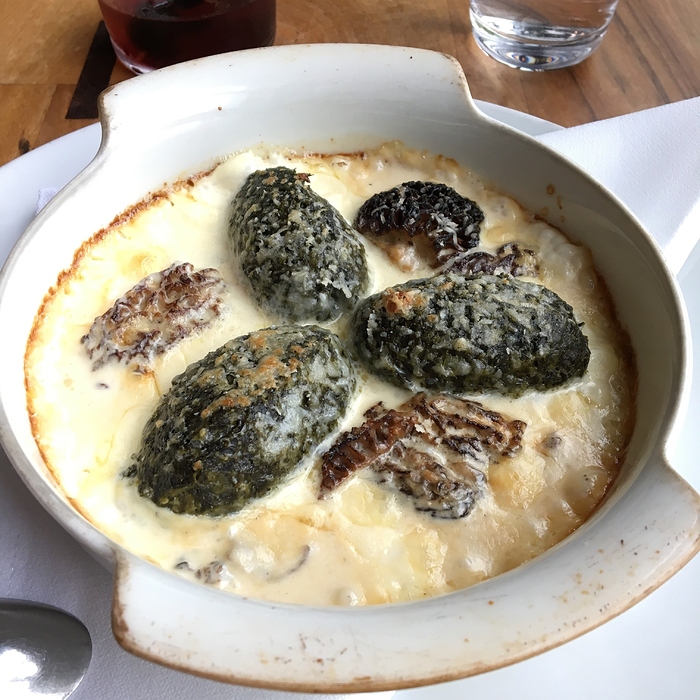 Had a second dinner at Ox at the bar. Ox is an Argentinian inspired restaurant with lots of grilled meats on the menu. Mostly walk-ins, they only take reservations for parties of 6 or more. 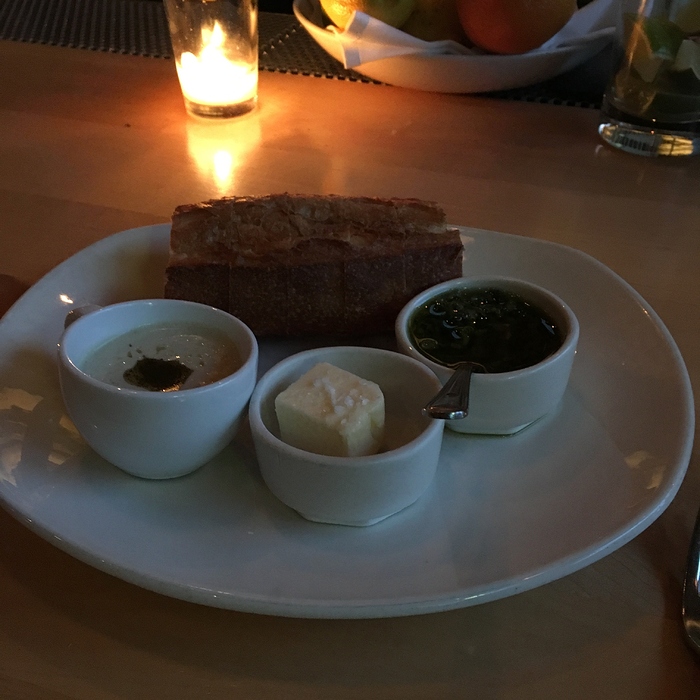 Fresh Clam Chowder ($16)
Smoked Marrow Bone, Green Onion, Jalapeño.
This was delicious, one of the best clam chowders I’ve had. Was instructed to scoop the marrow into the soup. A little spicy. Very rich and creamy with chunky vegetables, bits of pepper, and whole clams in shell. The marrow added even more meaty richness. 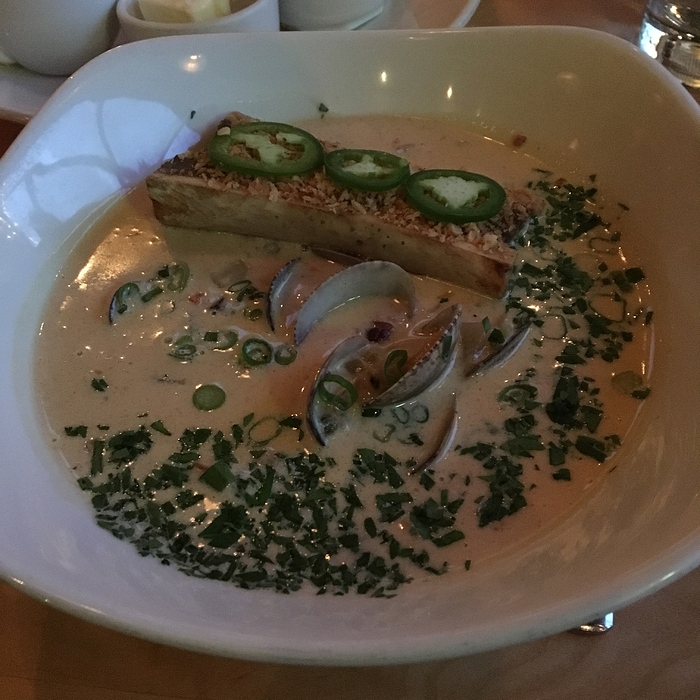 Morcilla ($14)
Pretty good. Chunky and a little sweet. Ate it with some of the provided chimichurri. Kind of wish I had gotten a steak though. 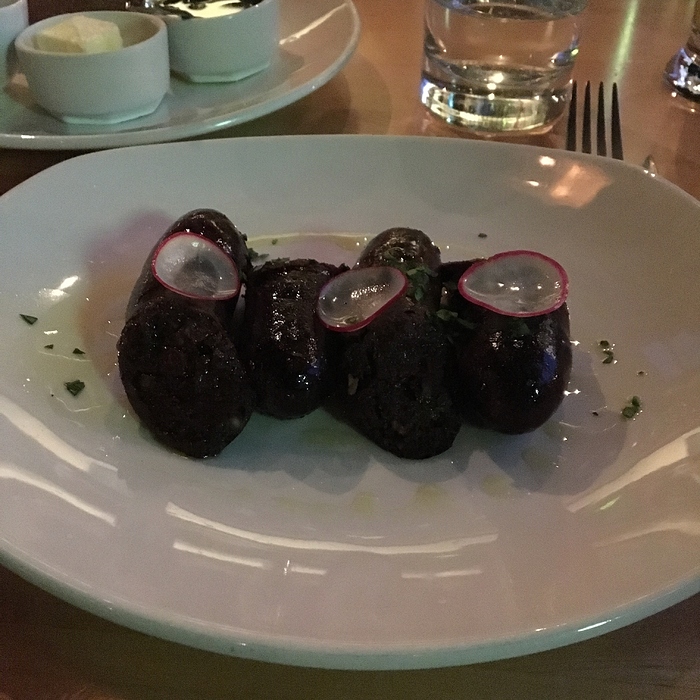 Stopped in here for lunch and had the banh mi with pâté ($11). They are known for their charcuterie so I figured I should get something with charcuterie in it. Good bun. Pâté was liver-y and seared a little crispy on the grill. May have had some pistachios in it? I think this was one of their pâtés usually served as charcuterie, so not the typical pate used in banh mi. Topped with pickled vegetables, with a spicy mayo sauce. Came with potato chips. 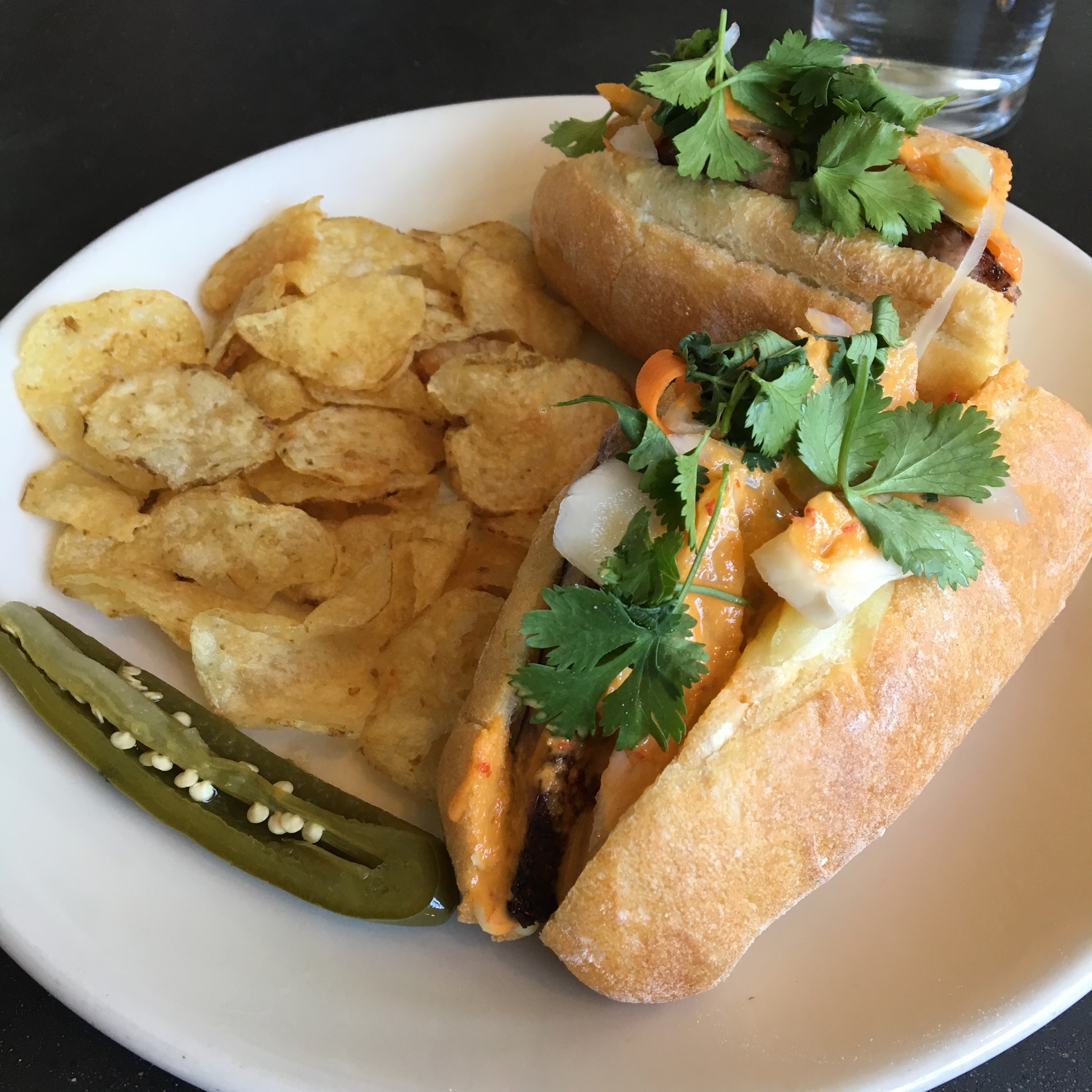 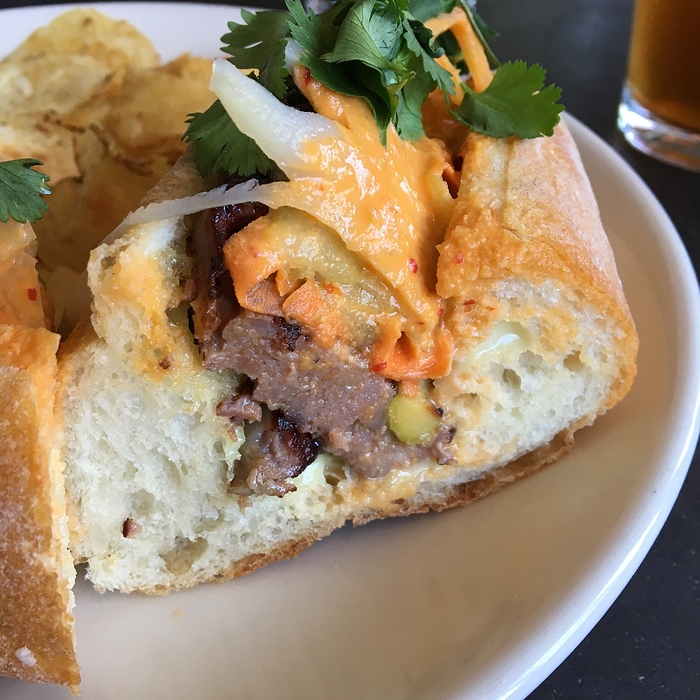 Had dinner here after visiting the OMSI, which is nearby.

Braised Oxtail French Dip ($13)
This had crimini mushrooms and was topped with melted cheese. Very good. Oxtail was somewhat shredded, very tender and juicy like beef stew. Juicier still when dipped in the salty jus. Good roll that held up to dunking. 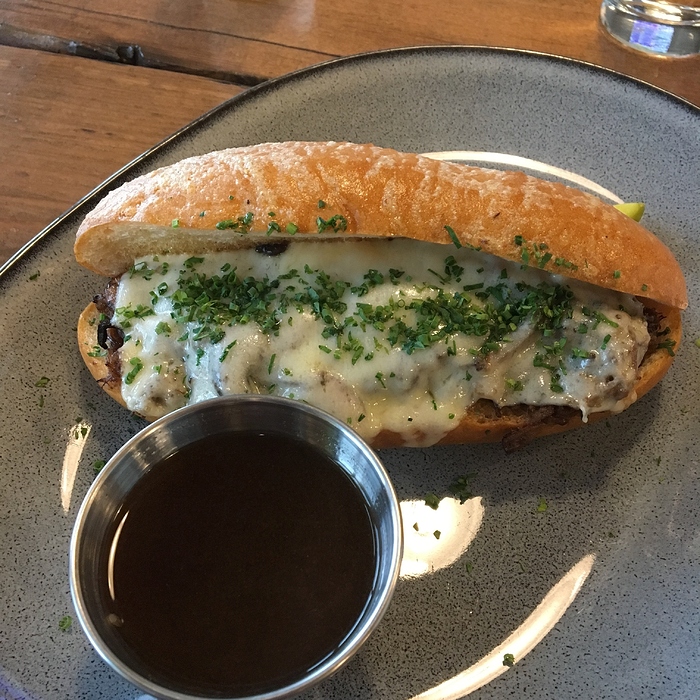 You can get Pok Pok Som in soda form now. 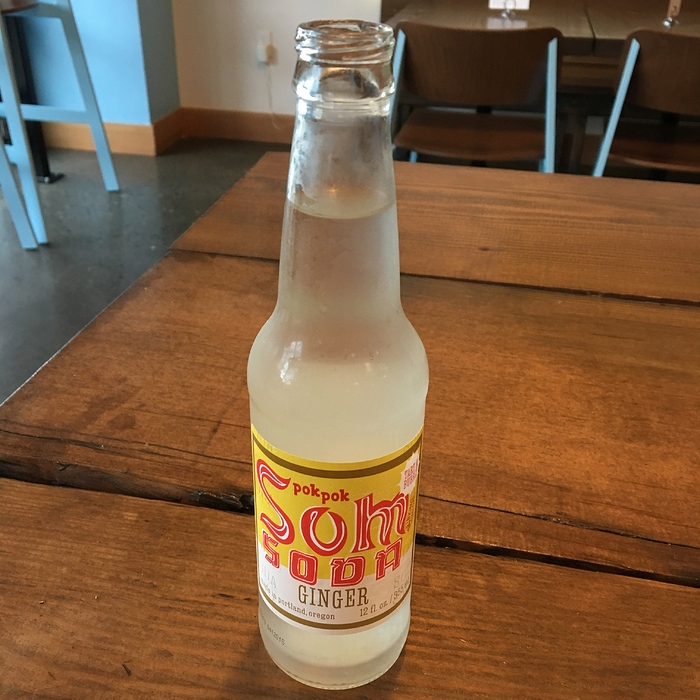 Hat Yai style fried chicken I’ve had before (at Farmhouse Thai in SF) this version had very little breading, maybe no coating at all except for spices.

Curiously, the version at Daughter Thai across the Bay seems to resemble your description of the Hat Yai here more closely, with little breading, and the texture of the ‘skin’ almost doesn’t like its a piece of chicken skin, but more like a egg roll wrapper.

Thanks for the great report.

Hahaha, to be fair I believe this is a common appetizer offered in France(?) albeit with the addition of butter. Don’t know if they usually trim the roots though. In the Bay Area I’ve had it at Petit Crenn and the now closed Volta in SF. They were good radishes. Was instructed to eat the stems and leaves too, which were also good. Peppery.

Curiously, the version at Daughter Thai across the Bay seems to resemble your description of the Hat Yai here more closely, with little breading, and the texture of the ‘skin’ almost doesn’t like its a piece of chicken skin, but more like a egg roll wrapper.

Will have to try Daughter Thai sometime, though looking at Yelp pictures of their Hat Yai chicken it looks quite similar to Farmhouse’s.

Hahaha, to be fair I believe this is a common appetizer offered in France(?) albeit with the addition of butter. Don’t know if they usually trim the roots though. In the Bay Area I’ve had it at Petit Crenn and the now closed Volta in SF. They were good radishes. Was instructed to eat the stems and leaves too, which were also good. Peppery.

Radishes are on both the lunch and dinner menus at Chef Daniel Humm’s Nomad in NYC. We had them once and sure enough, I felt it was $10 well spent. I was shocked at how good these were with just a little butter and salt.

So glad you enjoyed Davenport! Those are the dumplings of my dreams and we simply have to get them if they are on the menu. Not photogenic but delicious. He often sends out the radishes like that when they are in season. I think they are actually a variety called French radishes, which is kind of funny. Agree that the apple fritter at Blue Star is not their best offering. That for me would be the raspberry rosemary old fashioned. How long did you have to wait at Ox for seats at the bar? Still haven’t gone as I don’t do lineups well. Argh, now I want to eat all these Pdx things and we are not going again till October!

Thanks again for the Davenport recommendation, those dumplings were quite good. I’ll have to try the raspberry rosemary old fashioned from Blue Star next time if they have it. I was seated pretty much immediately at the bar at Ox, but I was a solo diner and it was a weeknight. Don’t remember how full the rest of the restaurant was. Definitely recommend the chowder if you happen to dine there.