On a rainy Saturday, what better to do than a quick run down to Portland to see if I could get some supplies that elude me on the Mid-Coast.

Forest Ave north of the interstate (which I gather is “outer Forest Ave” in local parlance) has a plethora of small markets and restaurants representing a wide variety of ethnicities and cuisines. I had shopped at Veranda Asian Mart previously but had not fully realized all the possibilities of Forest Ave until I looked up some of the places @WallaceReadsAlot and others mentioned in his most excellent Portland Maine Breakfast and Lunch post.

First up I needed some Middle Eastern staples. There are 3 halal markets on Forest Ave. I chose Foodie Friends Grocery & Restaurant based on some reviews, admittedly old. I think they must have been hard-hit by the pandemic. There was a fairly wide array of canned and jarred goods and a very small halal meat counter but sadly no fresh produce or prepared foods and an empty, unused kitchen area. I did get two (jarred) things off my list though.

Next I revisited Veranda. They have really nice fresh produce, almost all of which is not labeled so you have to either know what you are doing or be a risk taker. Or do what I saw one guy doing which was looking things up online and asking a staff member if what he had in his hand was what was on the screen. (It was in each case.) They also have a huge selection of tofu, a small but very nice selection of meats both fresh and frozen, tons of interesting things in the freezer cases and loads of grocery items. Lastly a small, curated display of gorgeous fruit up at the register. The only thing lacking for me was fresh noodles.

I was getting hungry and although I definitely have my sights set on having the burger at Bruno’s sometime I was not feeling it that day. I was intrigued by all the love for Po’ Boys & Pickles on that same thread so I headed there and ordered the Cauli Po’ Boy. 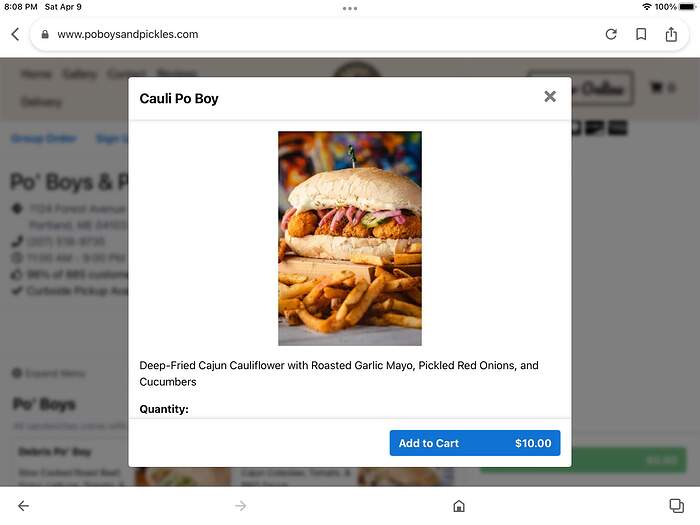 It was as fantastic as it sounds. Ate half for lunch in my car (see: rainy day although there is a fair amount of outdoor seating) and the other half was equally enjoyable at room temp for dinner with some blue cheese dressing applied. 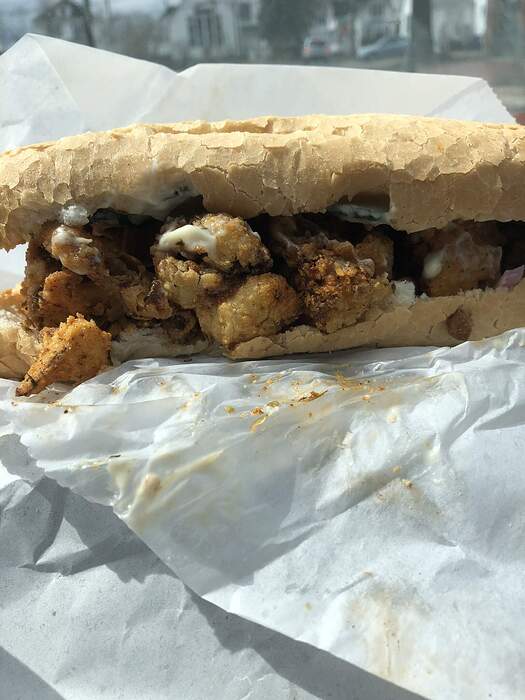 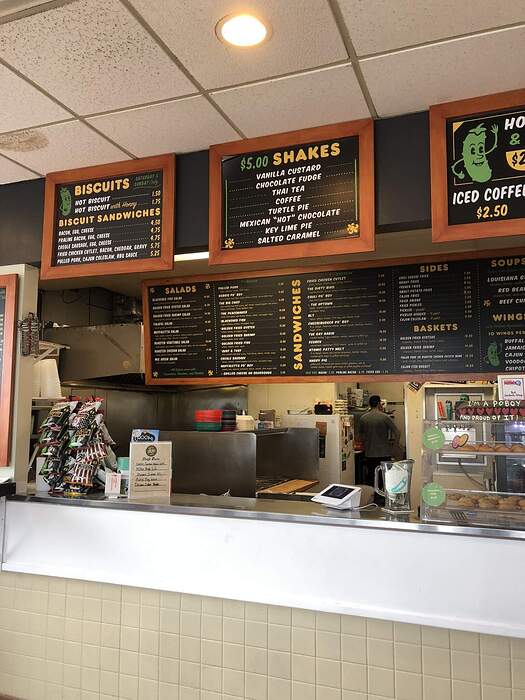 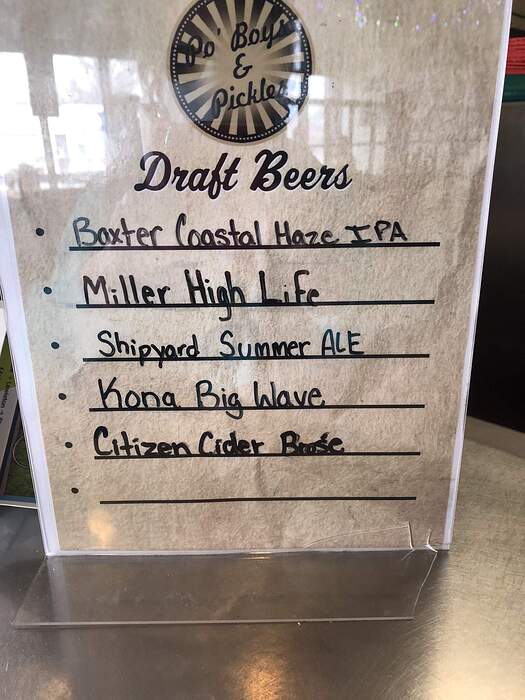 Lastly I went just around the corner to Bogusha’s Polish Restaurant and Deli. Great place, do not go when you are in a hurry, it is a one-woman operation and conversation is savored. (If you read that and shuddered this is not the place for you. I loved it but have days when I wouldn’t.) When I arrived one couple was just finishing a meal at one of the tables and another couple was buying food for a giant family Easter celebration with much discussion with Bogusha about types of pierogies and other prepared in house (frozen) specialties. I shamelessly eavesdropped and asked questions, was welcomed, and learned a lot. Once that couple wrapped up their (voluminous) purchases, the other couple paid for their lunch, one telling Bogusha it reminded her of her grandmother’s cooking, and left saying they’d be back soon. Then I got to ask my own questions and ended up with a quart of frozen bigos, a tray of 4 huge fresh stuffed cabbage rolls (weirdly naked but I can easily fix that and freeze some) and a small smoked kielbasa she chose for me. (The first couple got fresh kielbasa which I think I got was an Easter specialty and which figures in a much-discussed soup which is a hangover cure.) Pierogies next time, limited freezer space. 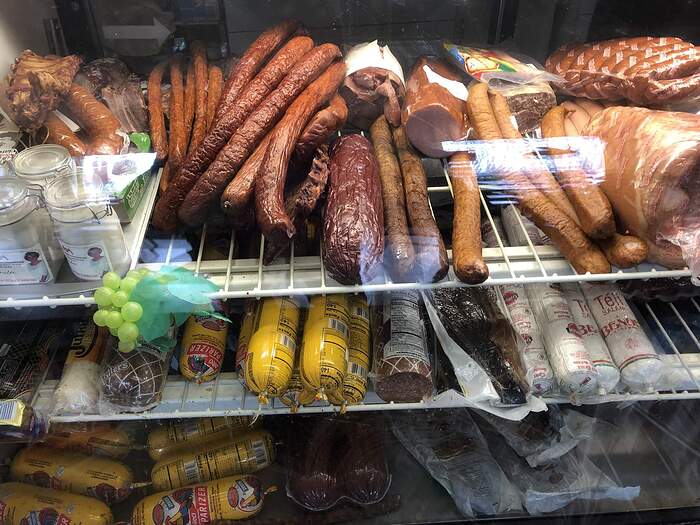 There is much more to explore on Forest Ave, including a falafel shop that caught my eye and sounds promising. Also, I had to circle the neighborhood a few times when I overshot and it’s pretty cute, at least the parts I drove through. A really fun outing! Thanks for all the great input on that other thread.

Nice report. FWIW, kielbasa is part of the Easter menu for people of Polish heritage and others with roots in nearby countries. So hopefully Bogusha’s Deli had good stuff to offer you.

And I thought of you when I saw this item on a new Italian bakery opening in Bath. Solo Pane e Pasticcerria is supposed to be opening up in April, according to Portland Food Map.

This is the small (maybe 7 or 8 inch) kielbasa link Bogusa chose for me. It is excellent, one of the best I’ve had. 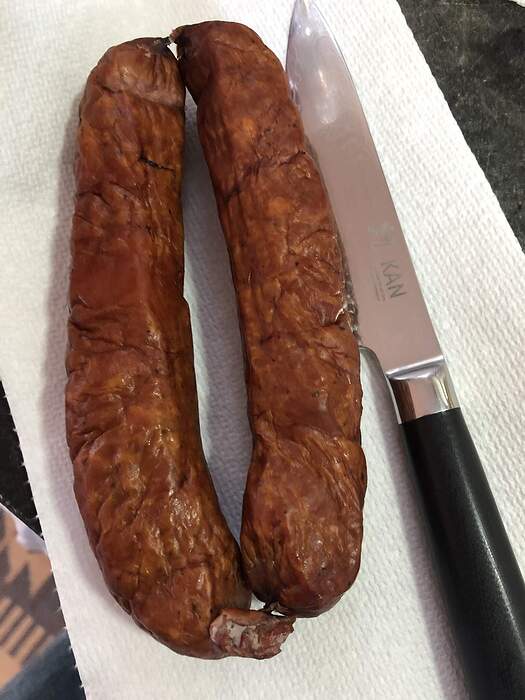 Maybe 5 or 6 years ago I was in the Polish market in Salem around Easter and in addition to their usual fairly wide selection of kielbasas there was a special one for Easter that everyone around me insisted I should get. (I love that I get to experience shopping as a communal exercise in Polish markets.) I never heard what made it special for Easter, do you happen to know? It too was excellent.

Also thanks for the link. Not just for the bakery info but I did not know about that resource at all, it should be helpful for planning future provisioning trips.

I never heard what made it special for Easter, do you happen to know?

When I was growing up with Czech and Slovak traditions, that basket and all the food prep had to be done before a visit to church the Saturday before Easter. You took the basket to (Catholic) church for a blessing by the priest. Families would give the priest some of the food too. Finding the tastiest Easter kielbasa, and ham, was a point of pride for my grandparents. If they were able to source from a traditional local purveyor that was the ultimate.

Loved your family story! It reminds me of a long-ago colleague of Polish descent who grew up in western MA telling me about taking baskets of food to church to be blessed, a story I had forgotten.

Also, that link was fascinating. The Polish white borscht soup, made with the kielbasa cooking water, was what I heard the long discussion about although it sounded like Bogusa thinks of it more as a recovery soup for Monday morning after the big Easter celebration.

I love learning about stuff like this, thank you!

Thank you for the virtual ride along on your provisioning trip! I can never get enough of coastal Maine.