In another thread, we were mentioning scenic Port Costa, which is on Suisun Bay just past Crockett ( at least I think it’s on the bay, maybe it’s the Sacramento river at that point ). I would go there, as many would, as a motorcycle destination. Starting from Berkeley, I would run skyline and Bear Valley a bit, take the back roads to Port Costa.

There was a mention of the Warehouse… I will let someone describe that place.

That thread was mentioning the Bull Valley Roadhouse, across the street. If one likes that port costa vibe, i would recommend stopping in at Bull Valley… it’s all california and local and not overly precious. I remember an outdoor seating area with glass covers that was excellent on a late summer afternoon, after a hike that was probably in Tilden ( maybe Briones ). My visit was a while ago and I can’t recall all the dishes. I do remember a “family style sunday” thing, where we got a lot of dishes in big plates to pass around. There were about 10 of us… maybe 12… and sitting out back was like being at a friend’s dinner party.

Although the food at the Warehouse ( when they do the steak and lobster dinners ) has a charm.

The old hotel is now renovated - the Burlington Hotel. I actually stayed there once, a long time ago, when I played a gig at the Warehouse and they were still renovating. Looks like they’re properly in business now, and even have a cafe that I haven’t seen. I haven’t stepped foot inside now that they are a going concern.

Anyone been out to Port Costa recently ?

I was in Port Costa sometime last year for a show at the Warehouse Café. We stayed overnight at The Burlington Hotel and enjoyed a great breakfast in the downstairs cafe the next morning. The next day we explored Crockett Hills and then took a scenic drive from Crockett to Martinez via Canyon Lake and wandered around the Carquinez Strait Regional Shoreline, which was nice. We had dinner at Bull Valley Roadhouse the night prior and despite the fact that, like yourself, I’m unable to recount any details whatsoever about the meal, I do remember it being very good. It’s traditional American fare done well with quality ingredients in a fun setting with solid mixed drinks. I have a couple of close friends who eat there often and really enjoy it.

If 40 years ago is recent, that’s when I hung out there a bit. The Warehouse was for a while owned by Bay Area legend Juanita Musson; her restaurant there was one of the 11 restaurants she opened and closed, mostly in the North Bay. The one at Fetter’s Hot Springs was my favorite. Her food was always traditional American (fried chicken, steak and the like), served in enormous portions. Her Sunday chicken dinners were legendary, and featured all the biscuits you could eat.

I don’t recall if I ever ate at the Bull Valley Inn, but liked to drink beer there. There was a sign over the bar that said “Don’t Forget to Ask For Your Free Port Costa Ring.” If someone took the bait, the bartender wold walk to the end of the bar and ring a big ship’s bell that was mounted there.

I’m staying in Port Costa in a few weeks. Any destination dining there, or in Crockett or Martinez (I live in SF)? Contemporary American with seasonal produce, or something unique not available in SF? I have Michael Waring in Vallejo flagged as per a recommendation of @geo12the , but that seems too far away.

Bull Valley Roadhouse is still there, it is seasonal and excellent, or was when I visited three years ago. Warehouse is the only other game in town, and you should just go in and see what they’re up to these days… do they even have food…

I assume your “in a few weeks” does not include this Wednesday. Nokni, a Korean pop-up is popping up at Bull Valley road house. I deemed it too far to drive on a weeknight, but if you’re there…

Also, years (at least 10) ago I followed this chowhound tip https://www.chowhound.com/post/rodeo-rickys-corner-fried-chicken-worth-risking-heart-attack-45722 and ate some fried chicken from a bar with a very rural Wisconsin vibe. The chicken was good–like very good homemade fried chicken. I have no idea how it has held up over the years, but according to yalp it is still open and waits can be long for chicken.

Curious as to why someone from SF would be “staying” in Port Costa unless it was for a honeymoon or a biker’s convention. Are you in a motorcycle club? 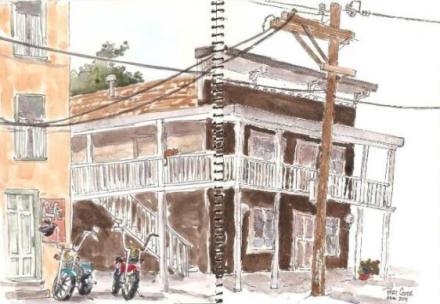 In case you don’t know that Port Costa is a renegade outpost, there’s a sign on the last building in the tiny town that reads “End of County-Maintained Road.” Beyond it is a…

This was the main draw in Port Costa in the 70’s, when I went there occasionally. I think I only ate in four of Juanita’s 11 restaurants (they had a habit of burning down) but followed her from Sausalito to Sonoma to Port Costa, where she ended up before retiring. 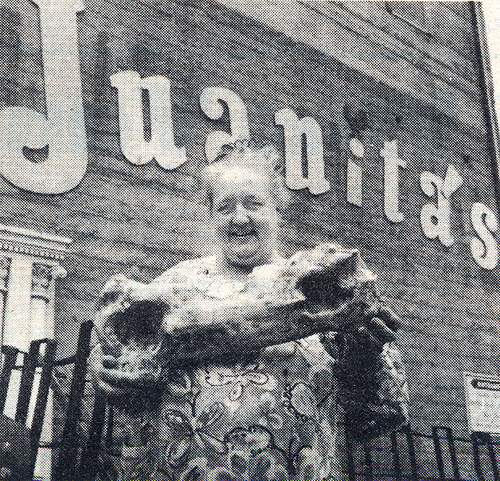 @Souperman, I’m not in a motorcycle club—- we’ll be doing a long walk, and will be happy not to have to deal with evening traffic back to SF! @tm.tm , the trip doesn’t overlap with the pop up, but I’ll consider the chicken place if it overlaps with our hiking route.

Just came back from a lovely weekend in Port Costa. Gorgeous hiking— the hills are lush and green right now. 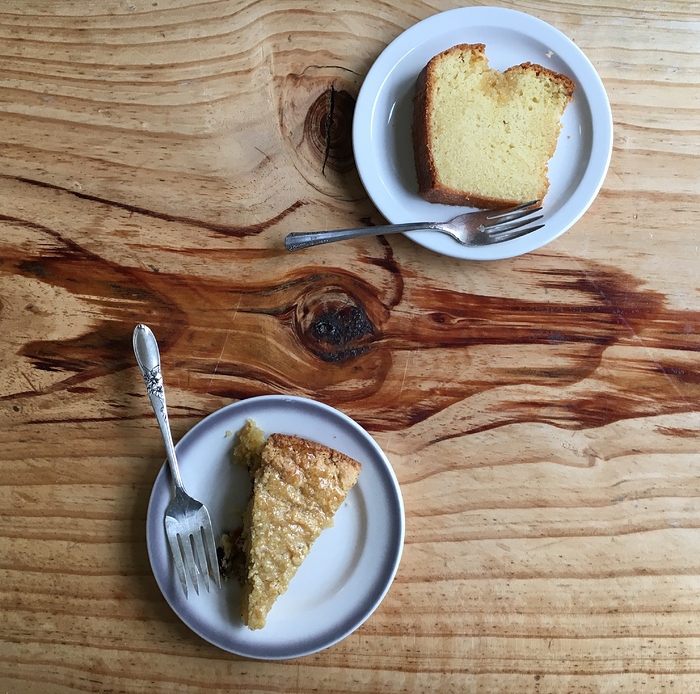 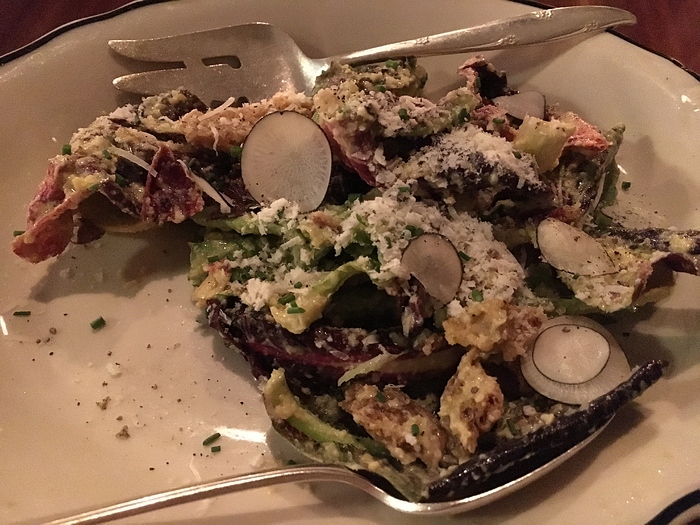 Chicory caesar salad had more dressing than needed for greens more assertive than romaine , but was quite good. Hand torn croutons and small (black) radishes were a nice touch. 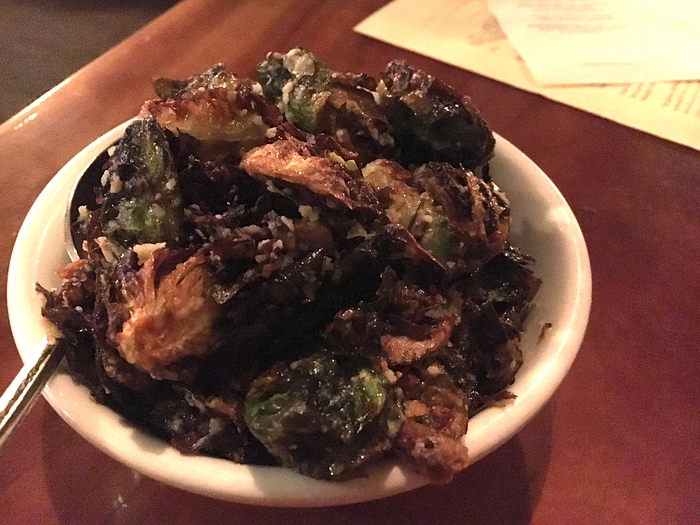 Fried Brussels sprouts had crunchy bits of bread scattered, which was an nice departure from the bacon common in brussels sprouts. 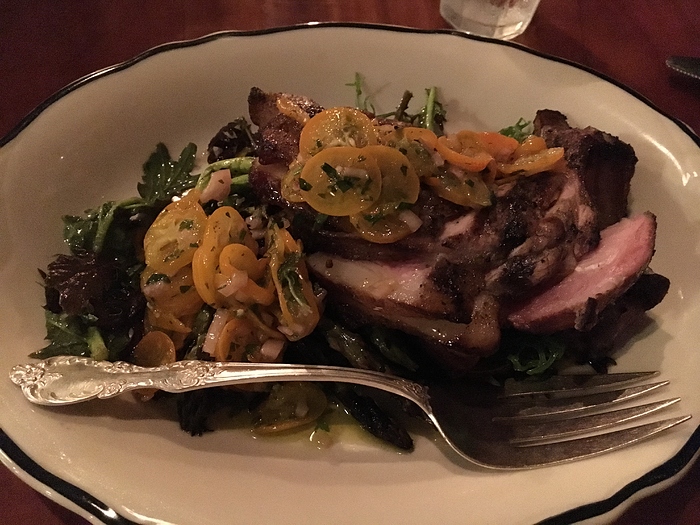 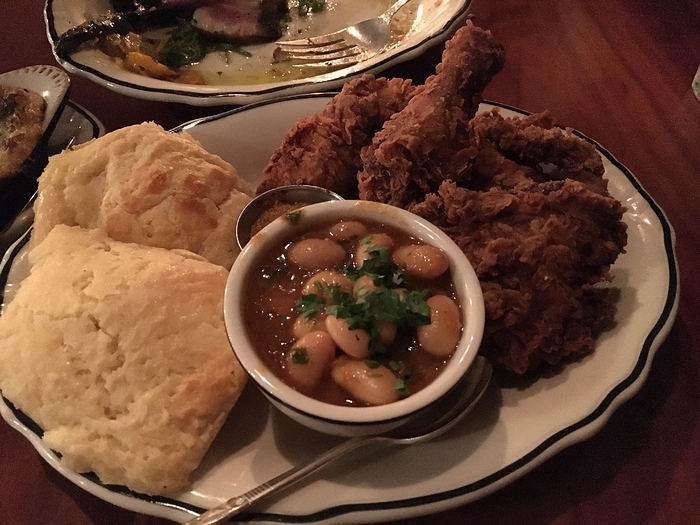 Best fried chicken I’ve had in a while. Super craggy crust. 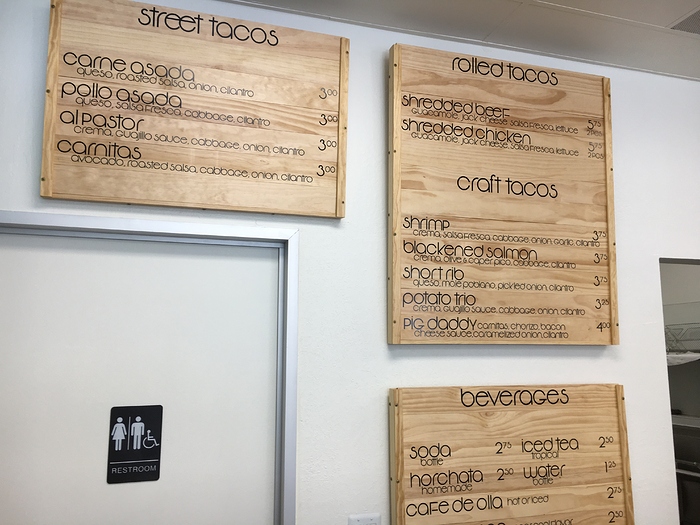 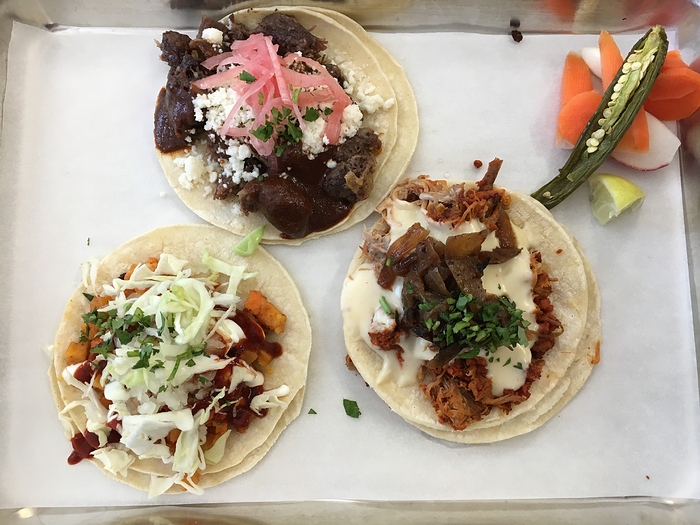 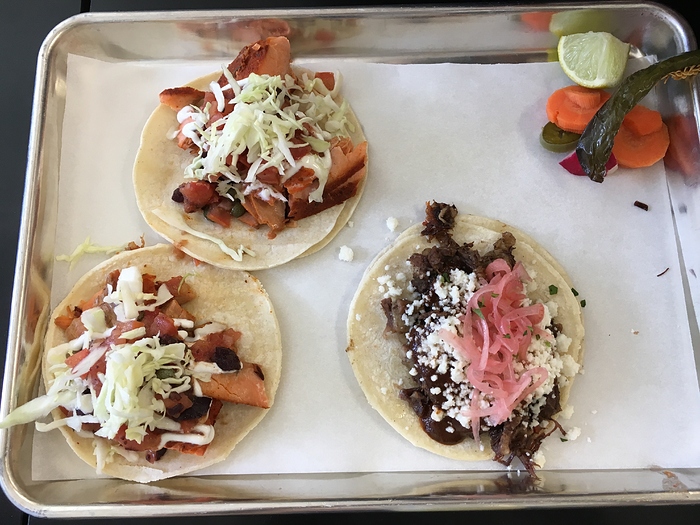 Sounds like the Warehouse bar hasn’t changed much from the Juanita’s Galley days. Does the Bull Valley Inn still offer a “free Port Costa ring” (from a ship’s bell at the end of the bar)?

“Taco Daddy’s” reminded me of Fresno’s non-existent “Nacho Mama’s.” Some years ago I did some field work down there, and my advance man got me all excited about checking out a place called “Nacho Mama’s.” Turned out he was talking about a ribs joint called “Not Yo Mama’s.”

It was good, though, as Utah Phillips would say.

Nice report. Interestingly, I was in Google Photos and it wanted to remind me what I was up to 4 years ago… which was having dinner in Port Costa… after a really nice walk in the hills. Sounds like you had as good a time as I did, if not better.

We did have a good time! (Other than to burn calories, I wouldn’t recommend continuing to walk for Martinez to Benicia)

Does the Bull Valley Inn still offer a “free Port Costa ring” (from a ship’s bell at the end of the bar)?

Do you mean the restaurant? If so, I had not noticed! The desk bell at the Burlington hotel Was certainly old enough to play the part.

Someone told me that the Bull Valley Roadhouse, until it was bought five years ago, served standard American fare and was a doubtfully profitable locals hang out. Apparently not everyone was so pleased with it upgrading to the kind of place on Michael Bauer’s top 100 list ( incidentally, he tweeted about the place last week)

When I went to Port Costa back in the 1970s, we’d eat at the Warehouse (Juanita’s) and drink beer at the Bull Valley’s bar. IIRC, it was almost as “rustic” (to put it mildly) as the Warehouse. Over the bar was a sign that said “Don’t forget to ask for your free Port Costa Ring.” If you fell for it, the bartender would walk to the end of the bar and ring an old ship’s bell that was mounted there, to the guffaws of the regulars.

I just checked out the Google photos of the Bull Valley’s bar, and it looks like it was shockingly cleaned up. 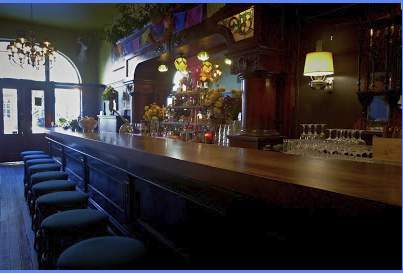 I guess my memory is faulty (perhaps excusable at my age). An extensive Google search revealed that the “Free Port Costa Ring” was actually at the Warehouse Cafe’s bar, not the Bull Valley’s. It also jogged my memory that the Bull Valley Inn (as it was called in those days) hosted jazz, and was in fact, considerably more sedate than the Warehouse, which isn’t saying a lot.

The web page below has a short film showing the Warehouse Cafe’s bar in 2009.

In the Straits: The Warehouse Cafe, Port Costa, CA

If you ever find yourself in Port Costa, CA, at the weed-strewn empty lot where Canyon Lake Drive meets the Amtrack corridor on the narrow w...

We just came back from an overnight to Port Costa. Literally gone for less than 24 hours, but loved it. We had beers at The Warehouse and listened to an 8-piece band playing outside on the patio with a sizeable crowd happy to be enjoying the shade on a 90-degree day. Dinner at Bull Valley was excellent. We split a burrata salad with wonderful Josey Baker bread, a wedge salad with green goddess dressing (wasn’t really a wedge but delicious), and a plate of the great fried chicken Craig described above, with biscuits, slaw and sausage gravy. All the entrees are to share - half the chicken came back to the room with us for the BF’s late night snackage. Dining neighbors told us the thing to order was the pork chop - next time. After a short walk to see the train tracks and the sunset, we indulged in many craft cocktails at the restaurant bar and then closed down The Warehouse (by which I mean midnight). The complimentary honey-buttered cornbread and fresh-squeezed juice from the hotel’s cafe was wonderful too. We did no hiking, preferring to retain all our calories. We’ll definitely be back. 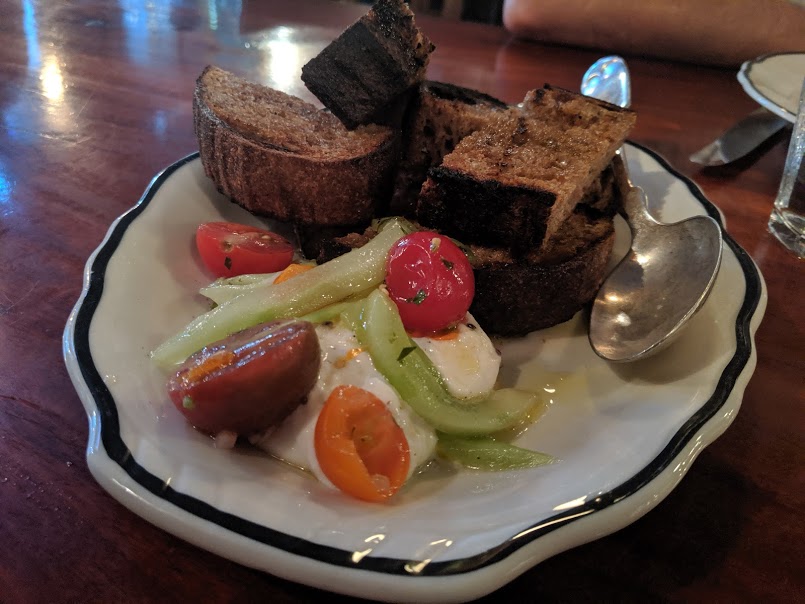 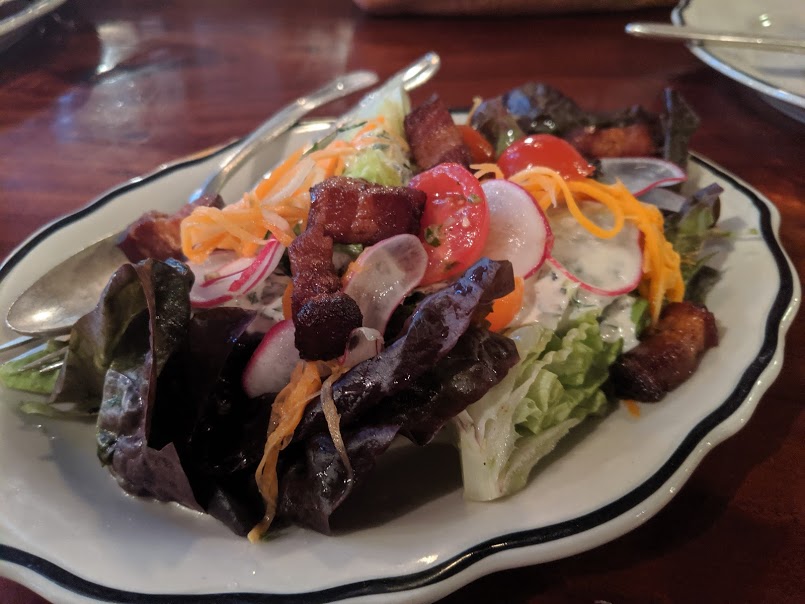 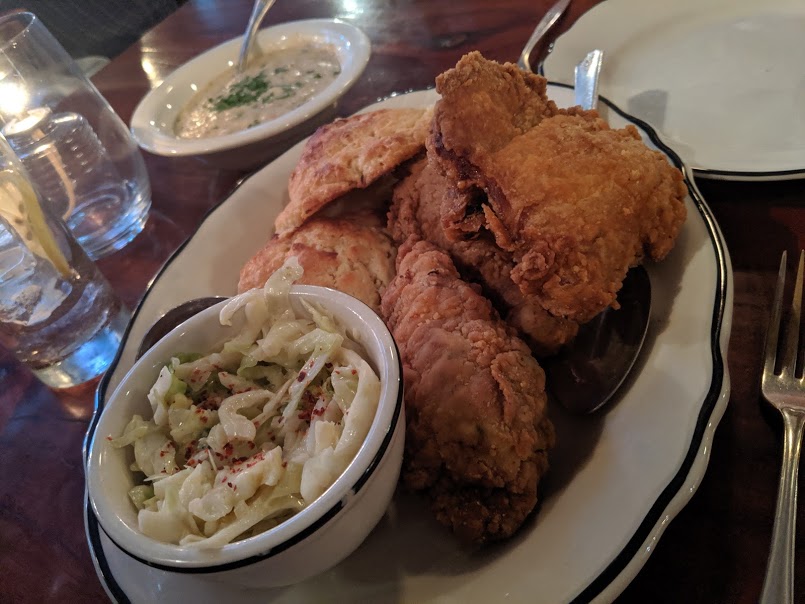 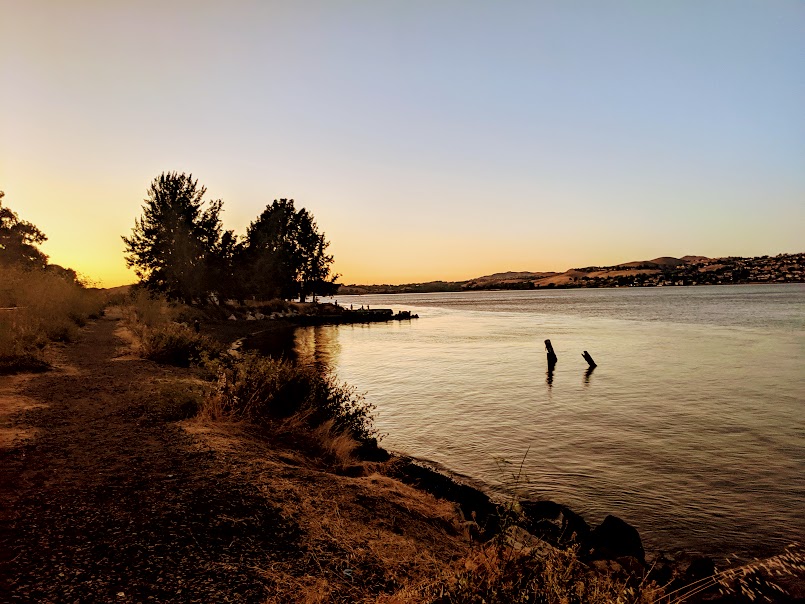 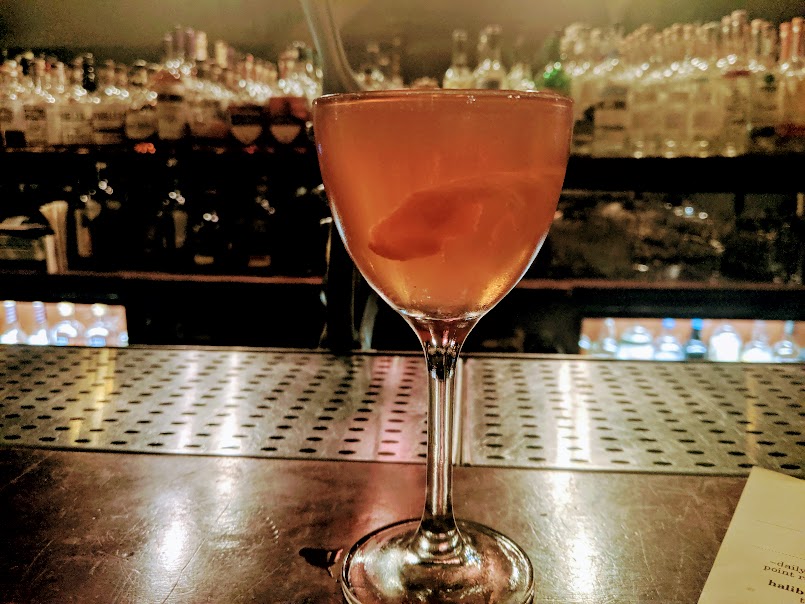 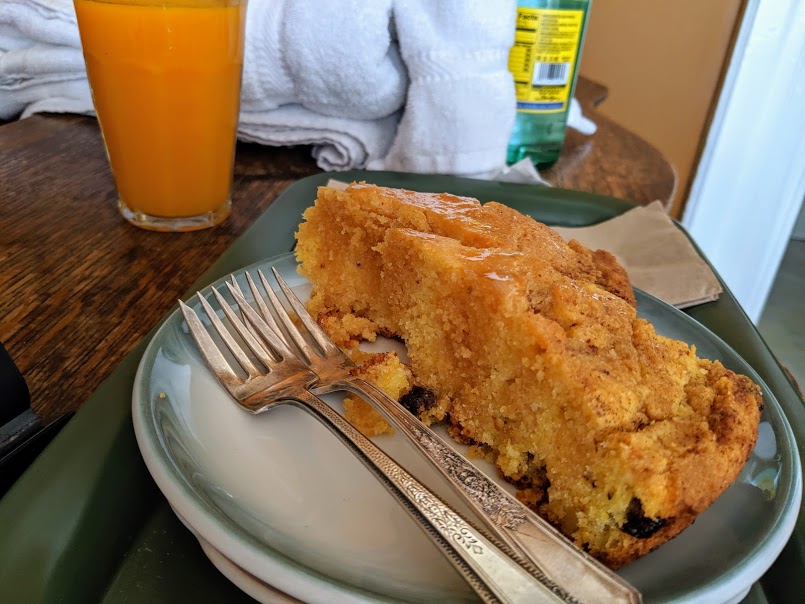 Love me some Bull Valley Roadhouse!

Nice I keep meaning to check that place out.

Wow!!! Caught my first sturgeon within a hundred yards of that spot, give or take a mile.

It was a long time ago. Weird looking fish, thought it was a shark.

Port Costa is a cool out of the way place to kick back and fish. Need to hit it up again for some stripers.

I didn’t realize there were still sturgeon in the lower Sacramento. Not many, it appears.