I’m really uncertain where exactly these types of hot pot style places actually originated from, but I presume it’ll be somewhere along the coastline of SE Asia. Per this SF chronicle article: https://www.sfchronicle.com/restaurants/diningout/article/A-trend-heats-up-at-Tastee-Steam-Kitchen-in-11009634.php

It appears to be from the Guangdong region so if I ever start a hot pot primer maybe it’ll go there.

In any case, Pop Kitchen is a steam “hot pot” restaurant that does not resemble your traditional hot pot set up; the set up is a little more complicated. In the middle of the table, below a set of grates, there is a “pot.” In Pop Kitchen you can choose between a congee or a soup that will be further enhanced by the items chosen on the menu. How is it enhanced? Well, the items chosen are steamed and the drippings from items fall into the soup or congee enhancing the flavors. The cooking occurs when the staff punches in a set time and a dome comes down from the ceiling and encapsulates the grated steam area. 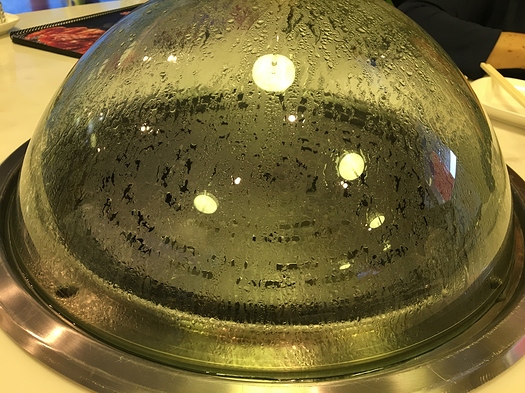 I suppose this method of eating is a little less fun than do it yourself dunking in boiling hot liquid but its a nice change of pace. Reminds me of the Korean BBQ places where the staff cooks for you rather than self engagement…

In any case, starting off the meal we had some complimentary pickled appetizers: 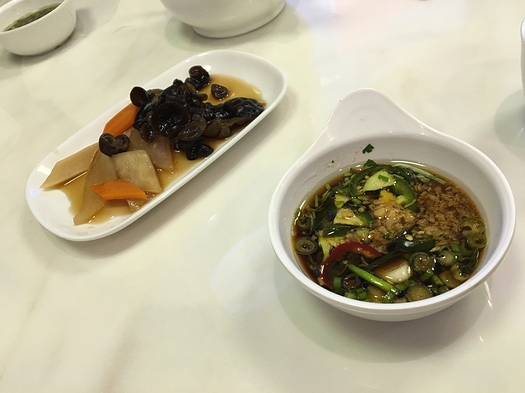 A bit vinegary, but the wood ears had a good texture while the other items I haphazardly guessed as some sort of root. Couldn’t quite place what it was, but still had a nice picklely crunch.

Right next to the pickled appetizers is the spicy soy sauce (honestly, these steamed hot pot places might as well be spicy soy sauce delivery vectors…). There is cilantro, minced ginger, jalapeños, and some red peppers. This is the default serving, but you can ask for them to adjust the ingredients to suit personal taste.

In any case, we started off our meal (not pictured) by choosing the mountain yam and spare ribs as the congee base. 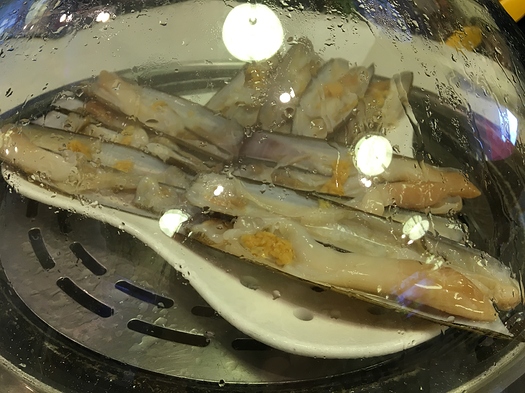 Starting off our seafood extravaganza, we opted for the Atlantic razor clams. They list Pacific razor clams as well (a little wider and oblongish) but did not have any in store tonight. 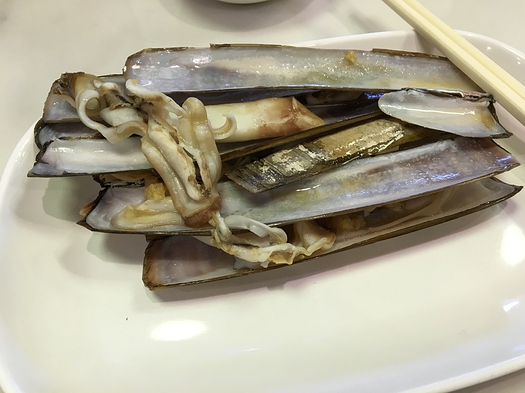 Steamed relatively nicely, they still had a good solid bite and chew and went well with the seasoned soy sauce. 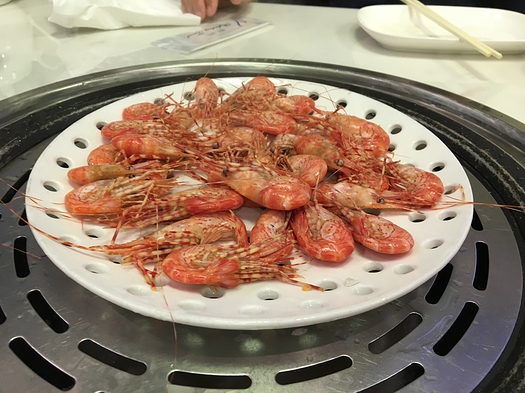 For the next plate, we went with the smaller sweet shrimp (honestly, I don’t know what the English name for this shrimp) for dinner rather than the larger coral spotted shrimp. Very nice and sweet, but I do wish they had the larger variant. 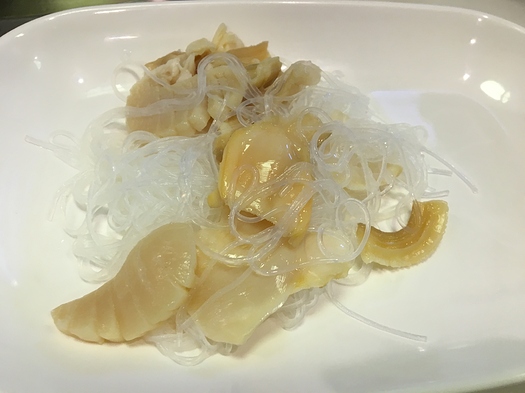 Following that we have the empress/surf clam over vermicelli. Very good, similar in texture and chew to the razor clam (though I do like the razor clams just a bit more), these big clams are delicious. The vermicelli also helps absorb additional soy sauce… mm… soy sauce… 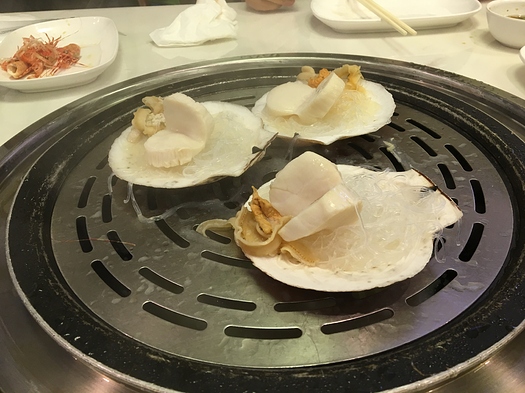 Following the empress clams, we opted for the larger live scallops rather than the frozen Hokkaido scallops with vermicelli. The large scallops are quite sweet! 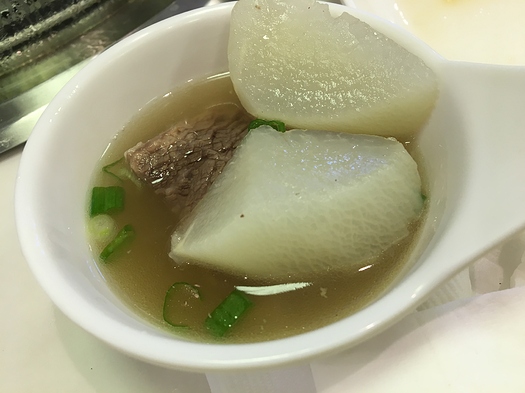 Part of the weekend special, they have beef stew over a clear stock with daikon/radish. Well simmered, the beef was quite tender and the daikon were soft and infused with broth. Quite good. 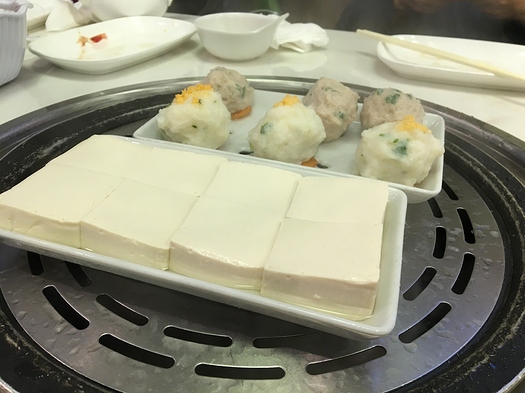 We opted for some tofu and also their house made fish and chicken meatballs. The tofu was soft and silken and… well I doubt that added much flavor to the congee, but was a nice contrast to our earlier seafood delicacies. 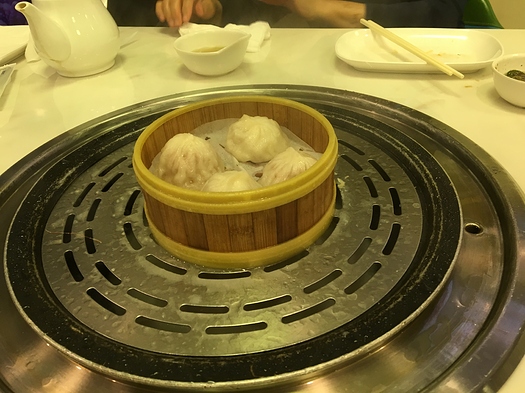 We saw that they had some XLBs as well and wanted to give it a shot. I thought the wrappers were on the thicker end but the inside was juicy and had a good savory taste. 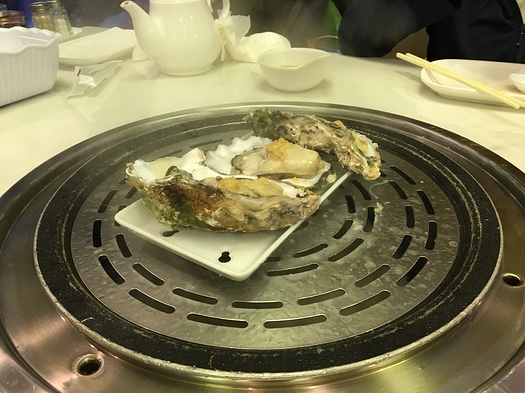 Overlooking a nearby table, we saw how large the oysters appeared and decided to order those as well. Large and plump, I thought they were very good as well. 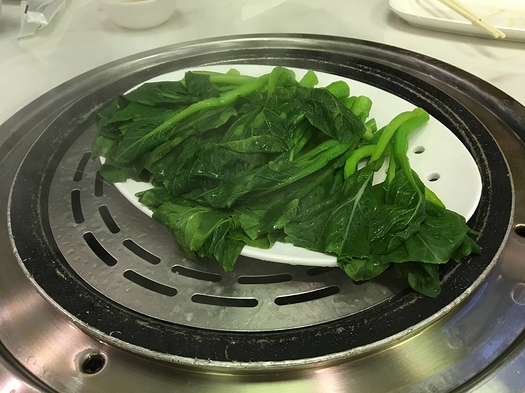 Alright, yes, we need vegetables as well. We got the choy sum and they don’t look that great steamed without some oil, but definitely on the less greasy side. The veggies themselves were sweet and provided a much needed fibrous boost to our meal. 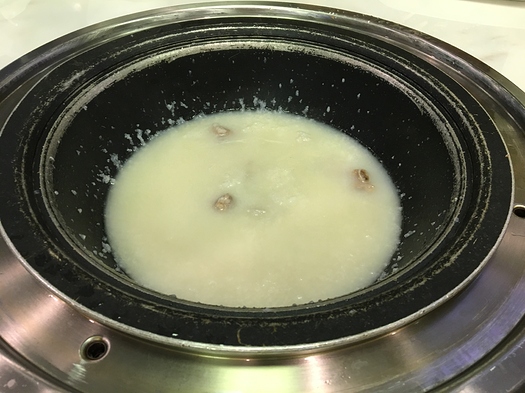 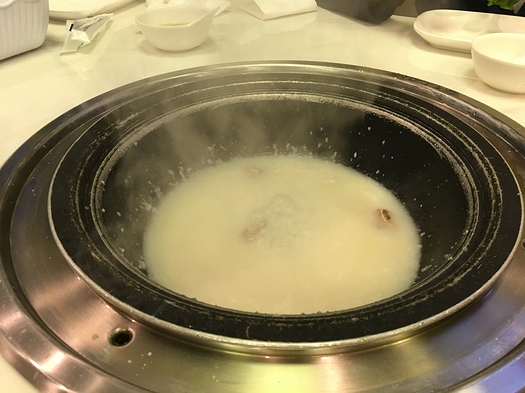 With the end of the meal, our congee formed from its bubbling nature and was infused with mostly shell fish… The mountain yams were quite soft, the spare ribs added some additional fat and savory taste, but the addition of all the shellfish juices helped amp up the umaminess of our meal. We didn’t really finish everything and took the congee home for tomorrow’s lunch. 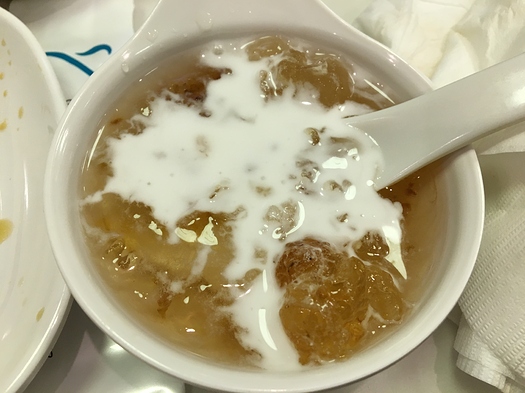 For dessert we got a complimentary cold dessert soup with coconut milk on top of peach gum/resin. Nice and cooling with the peach resin giving a texture that reminds me a little of snow fungus. Anywho, a nice end to our sumptuous feast. Price wise before tips it was around $180 so definitely not on the cheap end of things, but if you want something on the simple not so greasy side with large quantities of seafood I think this place works wonders.

Great report! How many were in your party?

I will sheepishly admit that there were the three of us and yes we did bring a few things back home haha.

I had a very good time at Pop Kitchen too, except when they charged us $95 for a 2.5-pound turbot ($38/pound) which should weigh about 1.5 pounds even before cleaning. They didn’t show us the whole live fish. 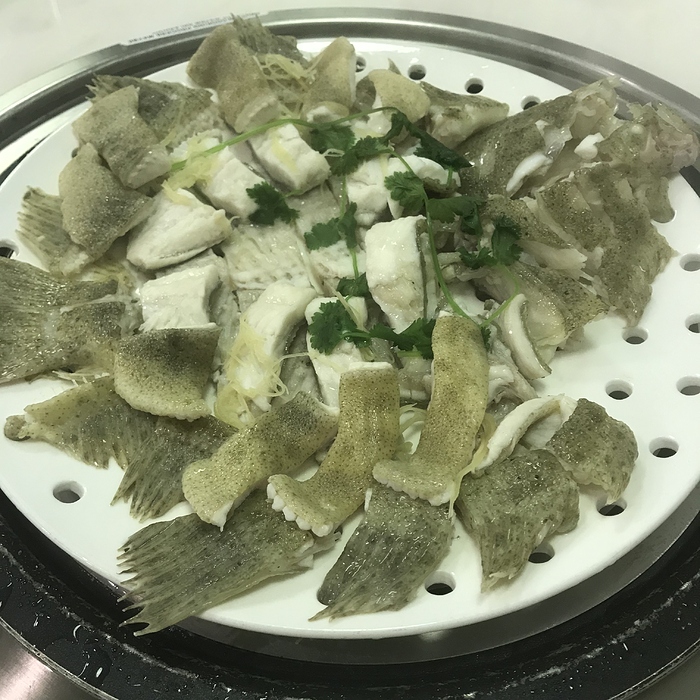