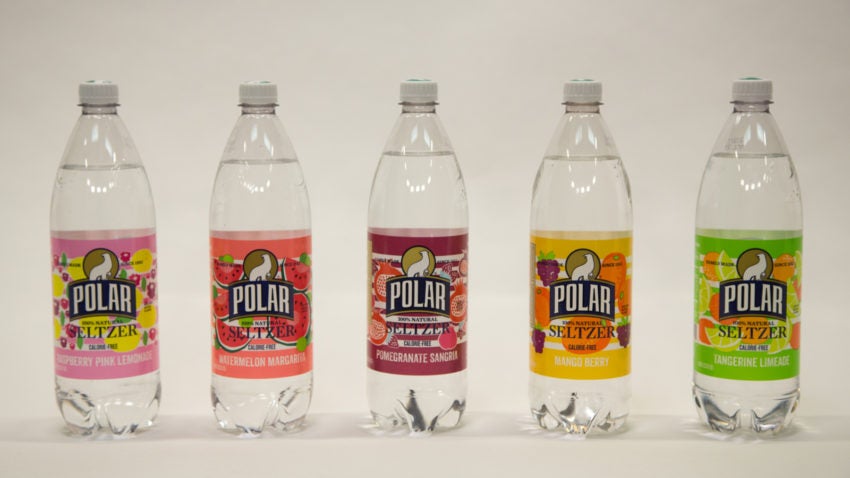 Take a sip of sunshine.

I find the popularity of these flavor varieties fascinating. Good marketing on Polar, but on the few occasions I have sampled one I fine them overly artificial and chemically tasting, with some verging on perfumy. I’d rather drink plain seltzer.

YES! I was hoping they’d show up at the Stop and Shop I went to on Sunday, but no luck. Fortunately, they did have Strawberry Watermelon and Blueberry Lemonade, which were two of their special flavors last year which gained such popularity that they’ve added them to the full time rotation. I am really looking forward to trying the Mango Berry and Watermelon Margarita.

I do agree with uni that some of their flavors are a little over the top, however. Their Pomegranate (and any iterations such as Pomegranate Sangria) is a bit off-putting for me, as is their Black Cherry.

They sound great. I wish my local store carried their rare “limited edition” flavors like the Cinco de Mayo one mentioned here; I’ve never seen any of those, only heard rumors. I love Polar and drink the stuff constantly.

I hadn’t heard about the limited-release Unicorn Kisses flavor before, but it was interesting to read so many different opinions of what the taste was. I wonder if, without the label to tell the customer what a given Polar flavor is, this would be the case with other Polar seltzers. These beverages are generally free of recognizable ingredients.

These beverages are generally free of recognizable ingredients.

I’ve always found the flavors to be quite distinct, although when they start blending them to create ‘cocktail’ combinations, they aren’t as recognizable and some are more successful than others. As far as ingredients… I think “water and natural flavors” (the only ingredients) are pretty recognizable.

I think “water and natural flavors” (the only ingredients) are pretty recognizable.

Of course “natural flavors” are generally anything but what you’d imagine. There is great leeway as to what food companies can label as natural flavors.

The reassuring term, “natural”, as discussed in other threads here and on Chowhound, isn’t necessarily what the average customer assumes. It includes substances like castoreum, which is derived from beaver glands. The 60 Minutes feature on Givaudan is summarized in text below the video link here: http://www.cbsnews.com/news/the-flavorists-tweaking-tastes-and-creating-cravings-27-11-2011/ Though flavoring compounders chemically synthesize replicas of actual flavors/aromas found in nature, many still meet the legal qualifications that allow them to claim that they are natural. This is not to say that these flavorings will harm you. Who knows? Red dye #2 was widely used for a long time before its dangers were discovered.

It’s true that many chemicals are synthesized and reassembled to create natural flavors, and that things like beaver glands have historically been used in some rare flavors. I’m not too worried about the natural flavors used in seltzer water, however, I can understand the paranoia.

We finally found them! So far, I’ve tried the Mango Berry, Raspberry Lemonade and Watermelon Margarita, with the Tangerine Limeade cooling in the fridge now. The Raspberry Lemonade and Watermelon Margarita are EXCELLENT. The Mango Berry was a little disappointing - it had kind of a musty aftertaste that I didn’t care for. I’d drink it, but not seek it out. I’ll be hunting the other two to stock up before the end of summer.

I was not a fan of the Mango Berry, either. There’s something funky about it that reminds me of carpeting. The others are tasty!

Yeah, wasn’t it weird? I LOVED the Mango Papaya from last summer so I was hoping this would be equally good, but it’s just not. I tried the Tangerine Limeade last night and I liked it pretty well - not as much as the Watermelon Margarita or the Raspberry Lemonade, but well enough. It’s got a little bit of that baby aspirin orange tang to it!

Not enough mango or berry flavor in the mango berry. I wish they had brought back the Mai Tai from last year, man I loved that one.

late to the party here. i find the seasonal flavors in general pretty hit or miss, although i was thrilled that the cranberry and clementine from last winter is now in the regular rotation.

the only combination from this summer was the reaspberry-lemonade, which, sadly, i found underwhelming.

For those who are true believers, they’re on sale for 79 cents this week at Market Basket.

I tried the Tangerine Limeade yesterday and it tasted decidedly like CHICKEN!!